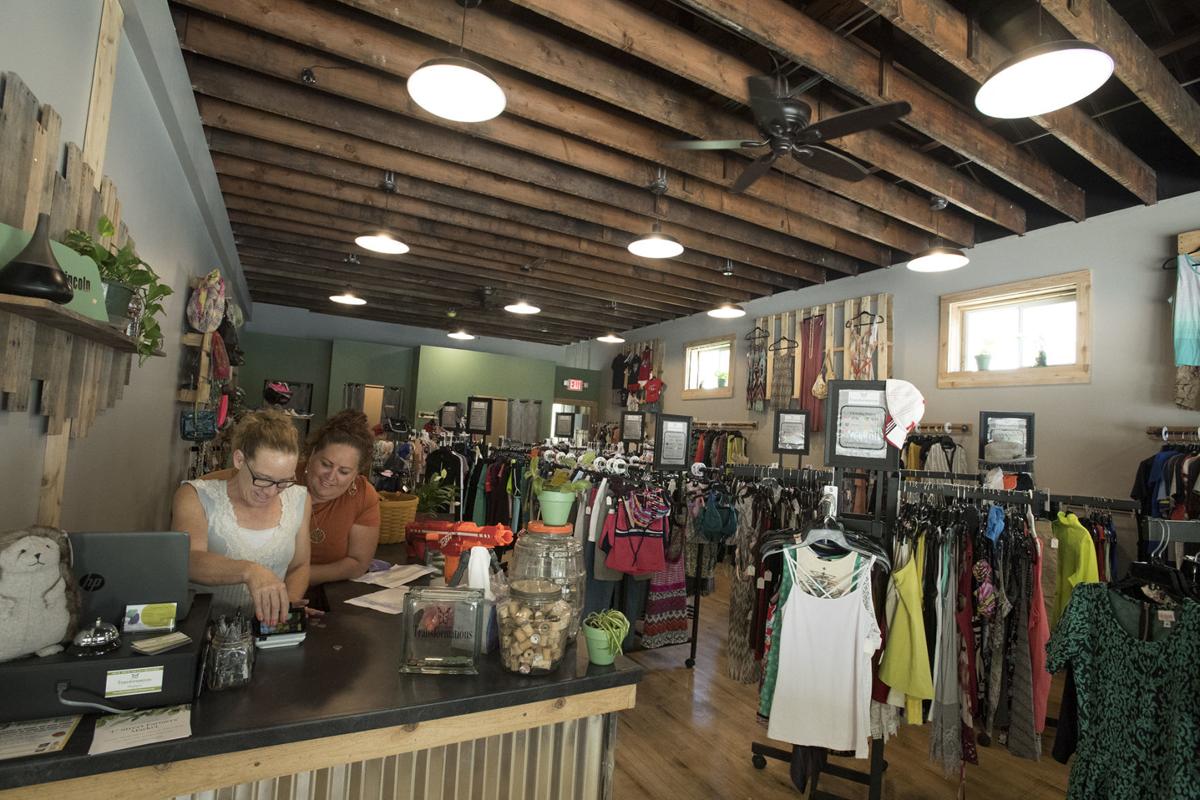 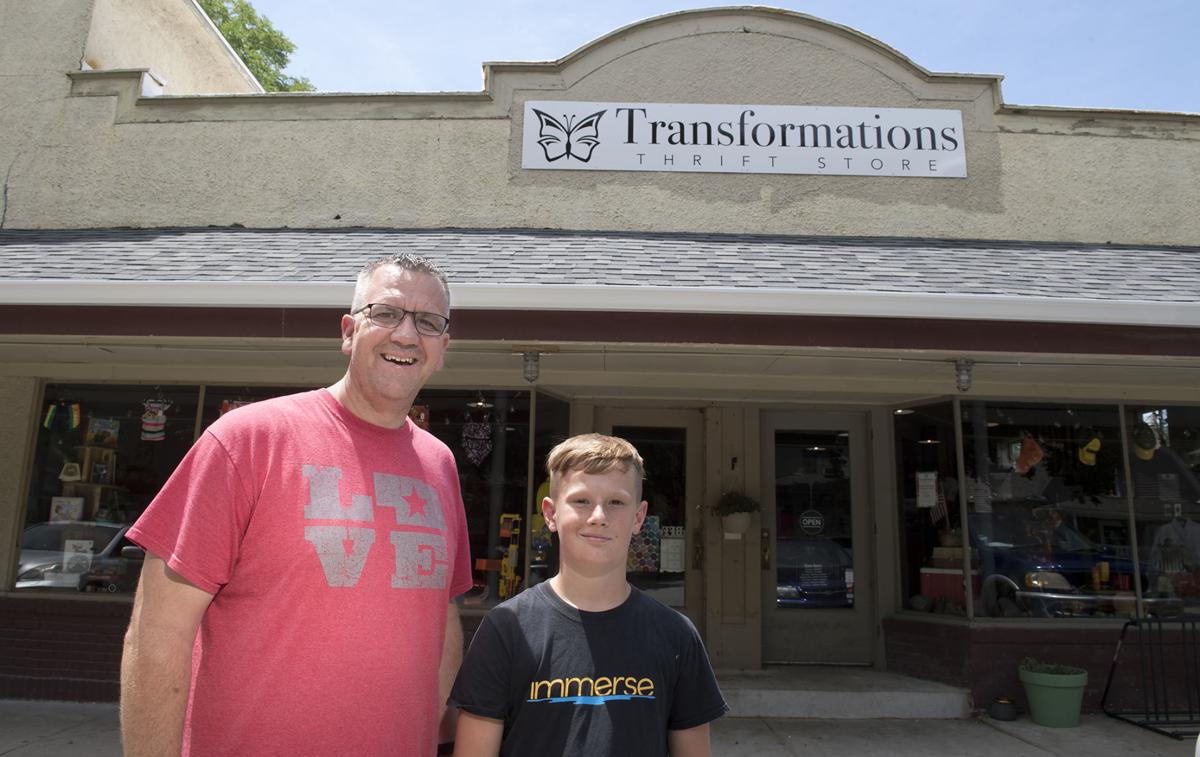 Jeff Heerspink, president of the board of Transformations Thrift Store, and his son Josiah, 12, stand out the store at the corner of 14th and B streets. 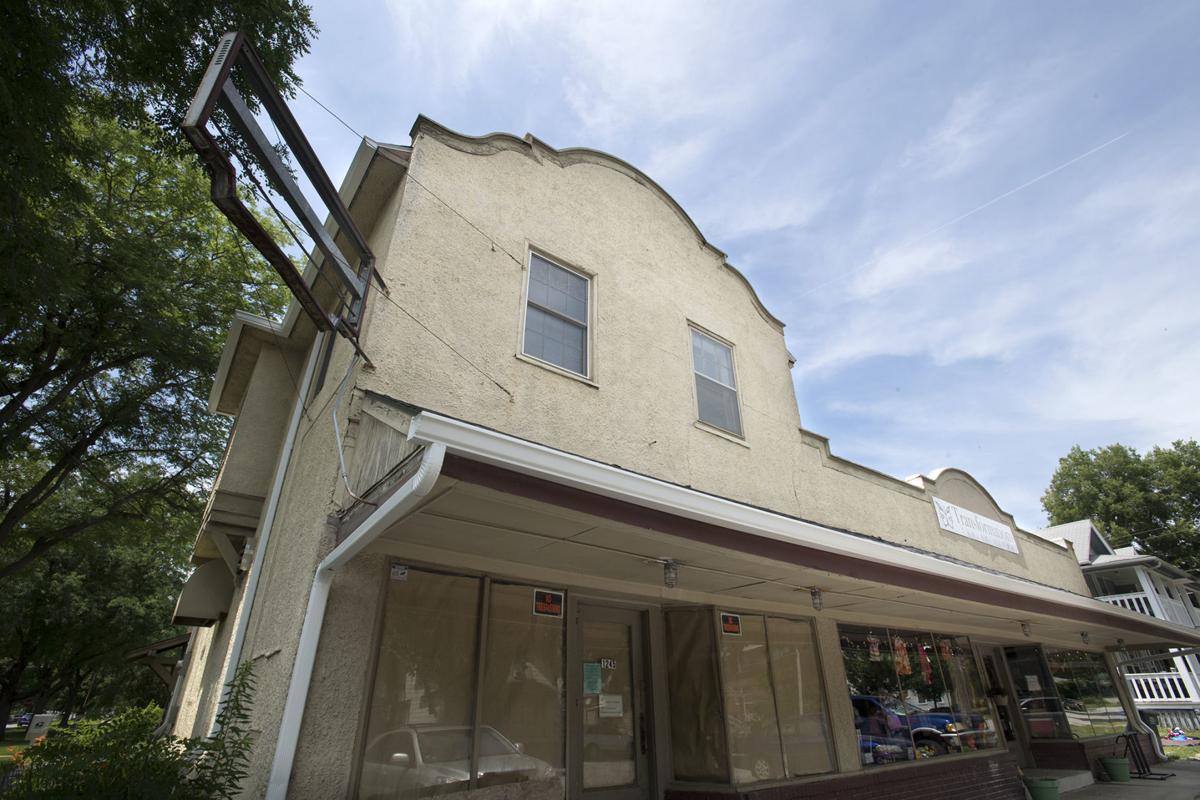 The commercial building at 14th and B streets has hosted a series of businesses since the early 1920s, but the corner laundry became a haven for crime and bad behavior. 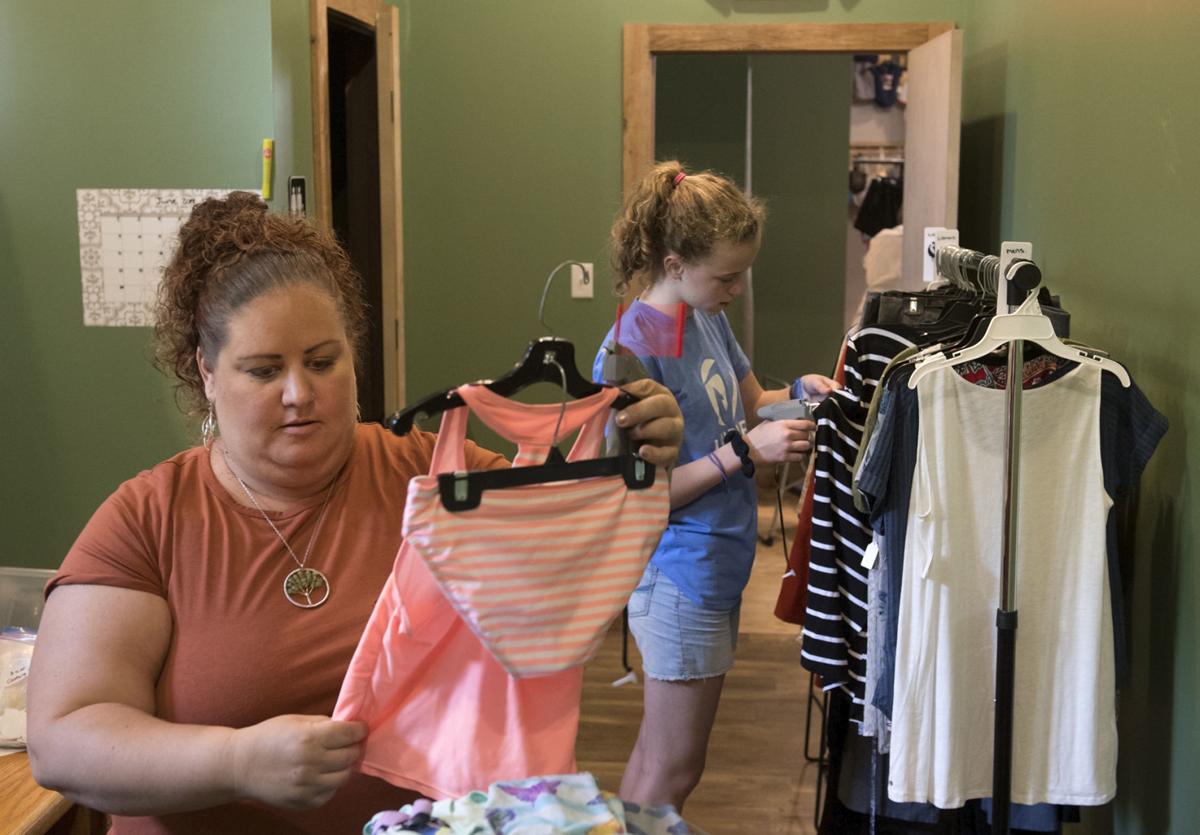 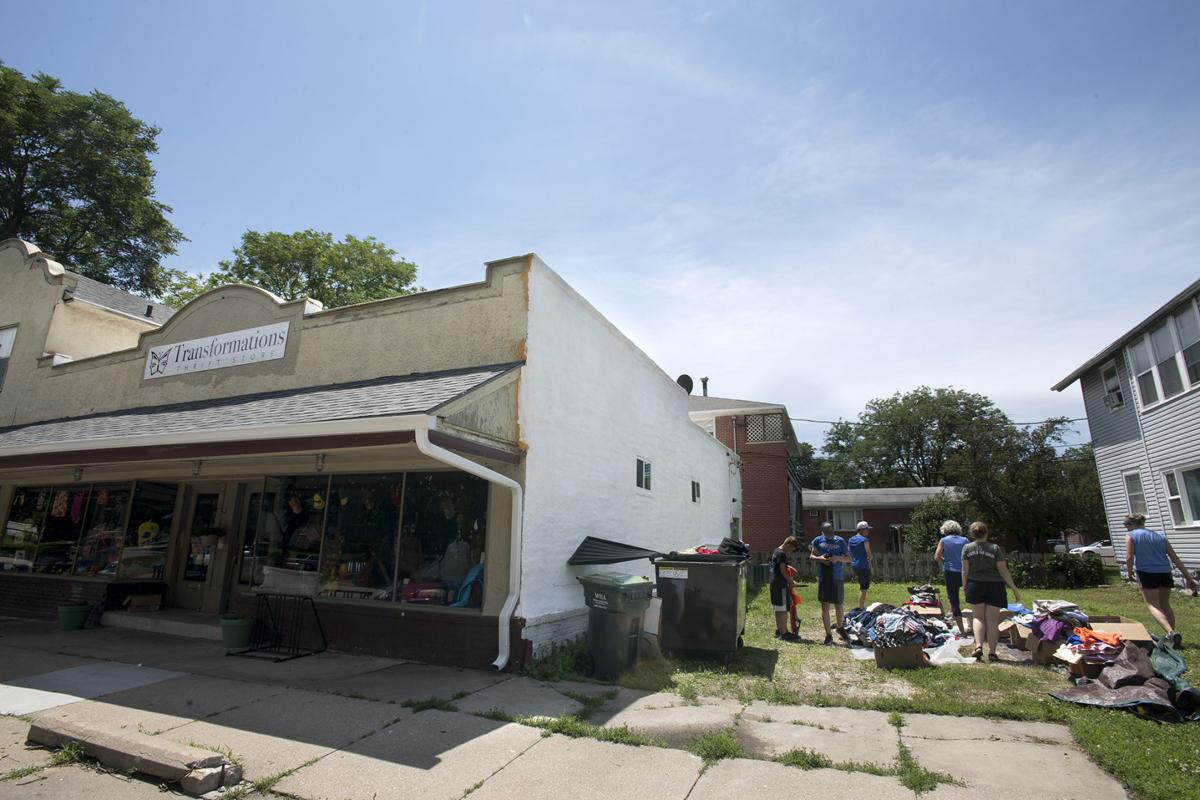 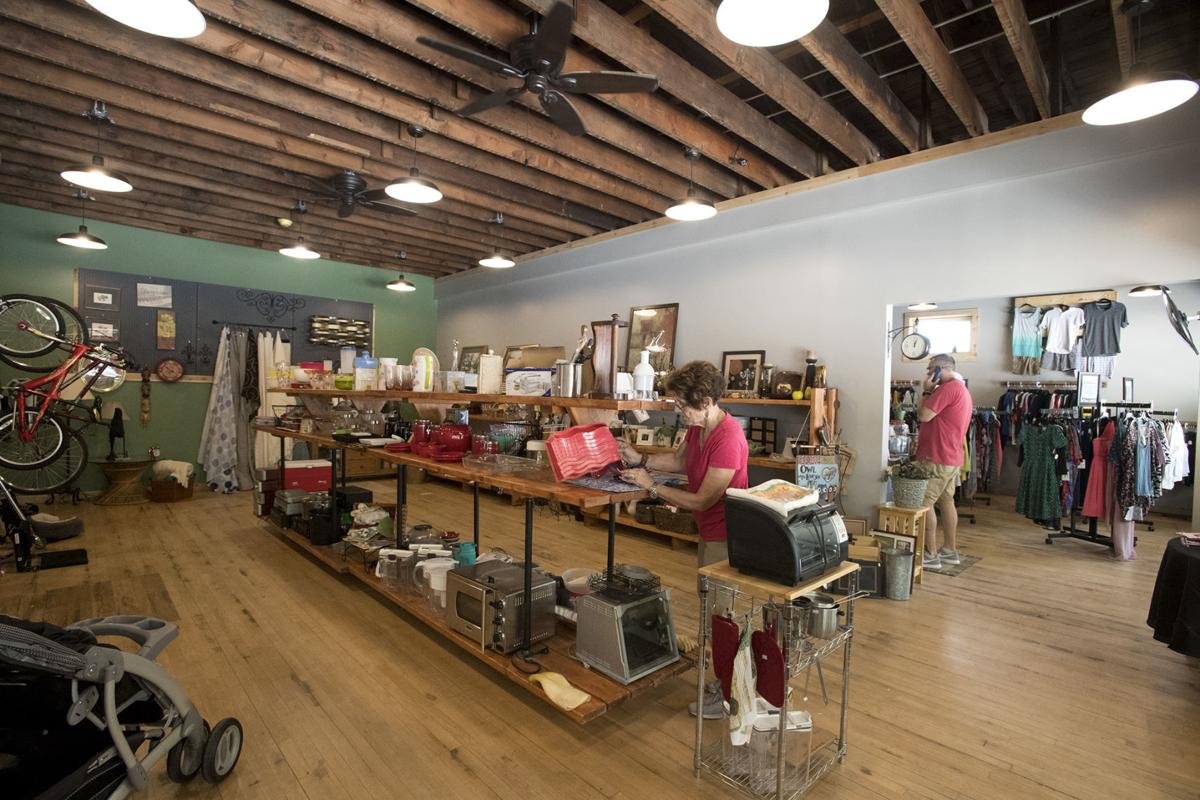 Transformations Thrift Store on South 14th Street is one of eight stores participating in the first Lincoln Thrift Store Crawl. 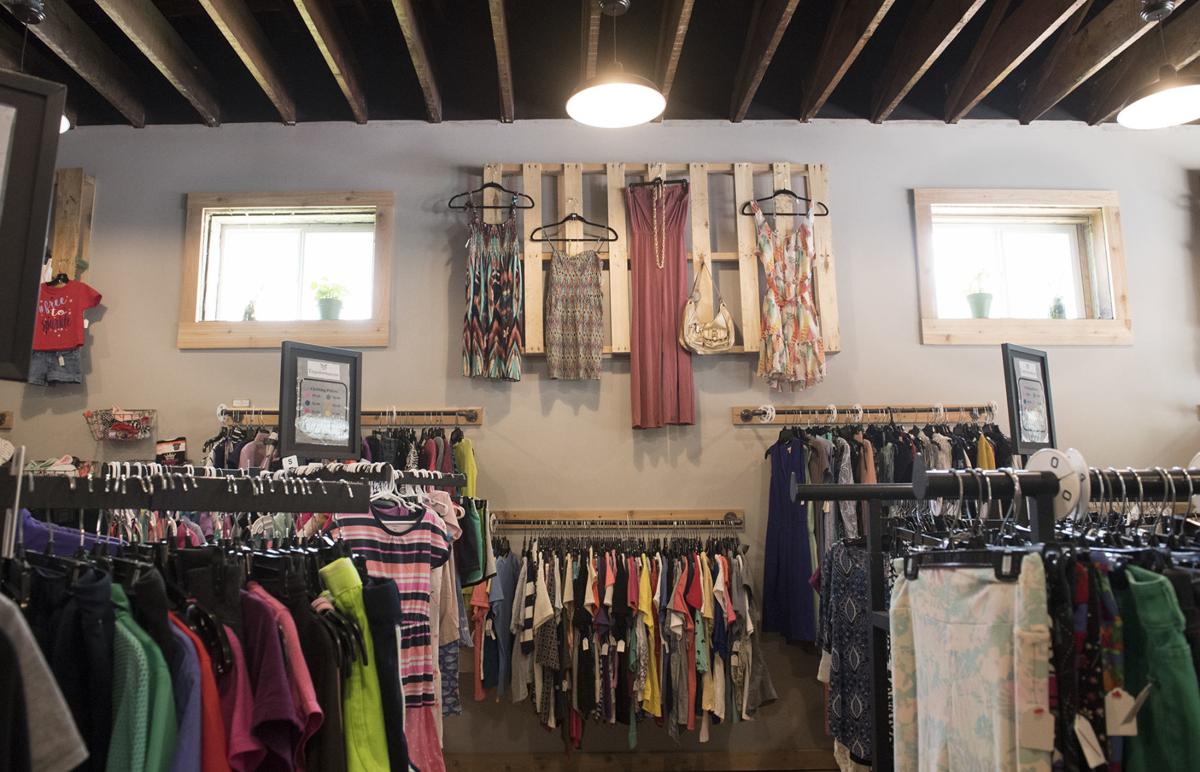 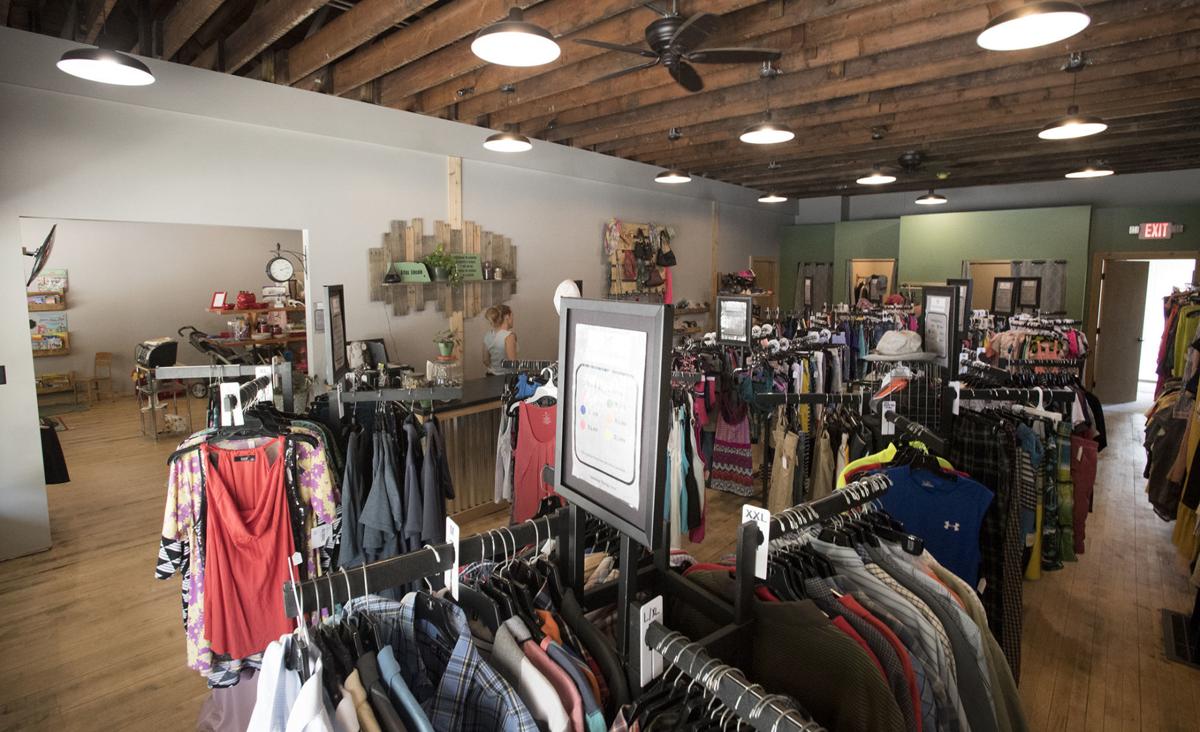 Racks of donated clothing fill one side of Transformations Thrift Store. 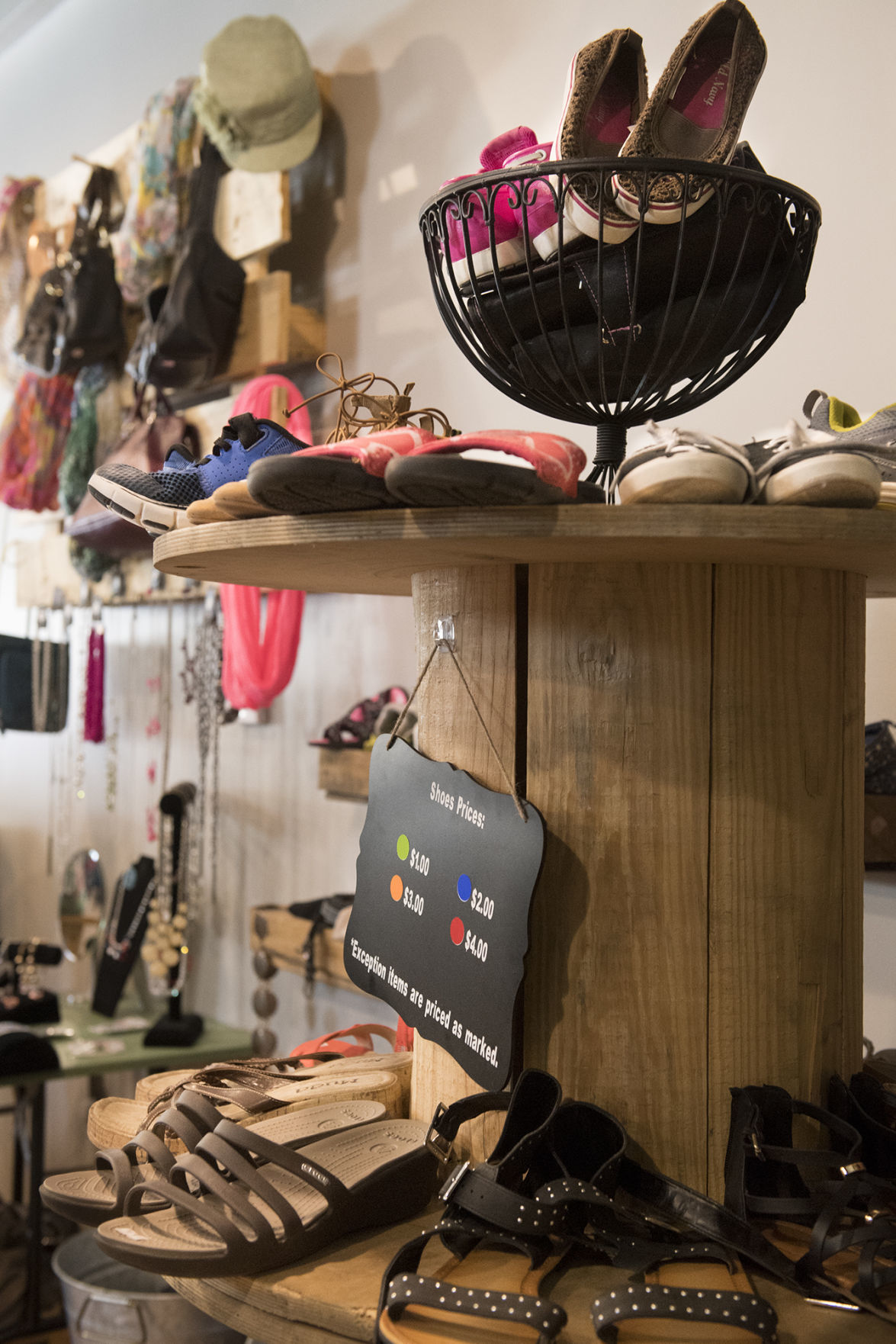 A variety of shoes for sale at Transformations Thrift Store.

The trio of historic storefronts were like magnets for the neighborhood’s seediest characters — and for the police.

Before the 110-year-old building sold, patrol cars were pulling up to 14th and B an average of 30 times a year. Disturbances and drugs, sex crimes and assaults, robberies and vandalism.

“A smoke shop next to an unattended laundromat is a breeding ground for problems,” said Jeff Heerspink, pastor of the nearby F Street Neighborhood Church. “In this neighborhood, or in any neighborhood.”

The building once served the area proudly. Starting in the early 1920s, the Brandt and Keck grocery fed the neighborhood, touting its modern ice coolers and refrigerators, its selection of cigars, pastries, meat and candles. Next door, Alfred Kolterman operated his pharmacy (“We got it — We’ll get it — or it never was”) while living in the upstairs apartment with his wife, Helen.

There wasn't much pride left when the building went on the market last year, its ceilings on the verge of collapse, mold darkening the basement walls.

One of the three tenants, The Commons LNK, was trying to bolster the area, with a meeting room and makerspace. But the corner laundry was notorious for narcotics and prostitution, said Case Maranville, who owns Maranville Properties with his brother Cole.

“You’d see drug needles and transients passed out on the floor,” he said. “It wasn’t a nice place. It was a nightmare.”

Which is one of the reasons the brothers snapped up the stucco storefronts. As landlords, they knew how rare it was to find a commercial building in a residential area. More importantly, though, the brothers have become invested in the Near South Neighborhood, renting out 375 apartment units.

They didn’t like the shadow the building was casting on its corner.

“Something had to change,” he said. “And we had the means to do it.”

After they bought the building, Maranville called Heerspink, reaching the pastor in Kansas City.

He was down there talking to a donor about starting a thrift store, though his church didn’t yet have a location.

“It was serendipitous,” Maranville said. “The stars were aligning.”

The pastor knew something about serendipity.

In 2008, Heerspink was ministering to inmates at the Northern Lighthouse Church on the other side of the interstate, but thinking about the Near South, where many of those inmates would end up living when they were released.

One day, as he stood outside the F Street Recreation Center and stared across 13th Street at St. Paul United Church of Christ, he said a prayer: God, let us start a church in this neighborhood.

He waited. Five years later, he heard the church at 13th and F, one of Lincoln’s oldest, was closing. He prayed again, and found a generous benefactor, and then a sympathetic St. Paul congregation, and then he was holding the big key ring for their new home.

Heerspink explains what this means. “There are a lot of churches that are still there, and they’re not bad people, but their walls have been used to keep people out,” he said. “We were very intentional to say, ‘We don’t want to be a commuter church. We want to serve the neighborhood.’”

Even if that means attracting congregants who get high to overcome anxieties about church. Or who show up drunk, yelling out in the middle of services.

“We accept almost anybody and everybody, wherever they’ve been,” he said. “How do you create a place for that?”

With what Heerspink calls a posture of caring. For example, F Street Neighborhood Church will host one of its four summer block parties Sunday, expecting to feed 300 people. It holds weekly farmers markets and food distributions.

Even then, he knows some people still have a hard time stepping inside. So the church is reconfiguring its parking lot, building a deck, and will pipe its services to the pavement starting sometime this summer.

“We’re getting rid of the walls for people. They can sit outside, smoke a cigarette and hear the message.”

The church is also a charter supporter of Atlas: Lincoln, a separate one-on-one ministry that tries to help the city’s most desperate and dejected — those who feel so hopeless they’ve stopped seeking help.

“Our goal is to come alongside people in intentional relationships, to provide another aspect of support,” said Brody Van Roekel, its executive director and only paid staffer. “Whether they need housing assistance, whether they need to go to treatment.”

Through referrals from other nonprofits or encounters on the street, Van Roekel helps assess and meet the needs of the neediest. Then his clients are paired with volunteer mentors, who commit to at least an hour a week for a year.

“There are people we deal with, they’re so down on themselves and their lives they don’t even want to walk into CenterPointe,” Heerspink said. “All we can do is walk with them; we can’t force them to change.”

Still, in its first year, the ministry has helped nearly 30 people, including a man they found sleeping under the church porch who now has a place of his own. They want it to grow — more staff, more mentors, more help — but that will take more money. And that requires another source of cash.

“When you’re ministering to a lower-income, often struggling population,” Heerspink said, “you don’t have a lot of income as a church.”

The cops don’t come around as much anymore — just seven times in the year since the Maranvilles bought the property at 14th and B and cut the old tenants loose.

“I’ve literally had police officers stop me and pull up to my vehicle and thank me for buying the building,” Case Maranville said.

But the corner has been busy. Church volunteers have spent hundreds of hours cleaning and rebuilding, turning two storefronts — the smoke shop and the Commons — into one.

“We literally stripped the whole thing down,” Heerspink said. “We wanted a quality building. It’s to serve the neighborhood, and I don’t think that means doing a poor job.”

So they removed all of the old plaster and lath, mitigated the mold, replaced the wiring, added insulation, redid the flooring, restored the pride.

“It’s really a whole new building in those two bays,” the pastor said.

The 1,600-square-foot thrift store opened earlier this month, with the help of a 53-foot semi-trailer full of clothes and housewares from a northwest Iowa nonprofit, and then from a wave of donations from the community.

It’s managed by CeCe Robinson, who has two part-time employees and a team of volunteers. Business has been brisk, she said. Neighbors appreciate it.

“They feel like this was created with some pride,” she said. “And with them in mind.”

Their immediate goal is to sell quality items at affordable prices, to raise money for the Atlas ministry. But it goes deeper than that. They’re cleaning up the corner, and they want to provide volunteer experience, which could lead to references and then to jobs for those who need them the most.

The area needs more of that, said Shawn Ryba, director of the South of Downtown Community Development Organization.

“We’re really excited about it,” he said. “It’s investing not only in the brick and mortar, but also in the people who live in the neighborhood.”

Maranville is still looking for a tenant for the old laundry, a 900-square-foot space with original tin ceilings. Maybe a coffee shop or a bakery, he said, to anchor the corner.

But for now the focus is on the thrift store, which Heerspink and others named Transformations.

“We transformed the building,” he said. “And we’re hoping to transform the neighborhood as well.”

Suspect on the run in fatal shooting of 3 in Texas

Suspect on the run in fatal shooting of 3 in Texas

Five years ago, James Young was a one-man movement, holding a protest sign along South 17th Street during the morning rush hour: Save This House.

The community garden across the street from First Presbyterian Church has helped feed 30 families for six years, yielding 2,000 pounds of fres…

Near South homes tour: The house built for a salesman, built again for a plumber

The first time the basement boiler kicked in, the racket reminded Shelly and Dick Smith they weren’t living near 77th and Old Cheney anymore.

A Community Corrections Center-Lincoln staff member was sent to the hospital Wednesday night after being assaulted by an inmate.

After 15 years of teaching at the Colorado State veterinary program, Carolyn Butler found herself looking for a piece of land in Latin America.

The nonprofit’s small staff has spent more than two years knocking on thousands of doors in the neighborhoods south of downtown.

Jeff Heerspink, president of the board of Transformations Thrift Store, and his son Josiah, 12, stand out the store at the corner of 14th and B streets.

The commercial building at 14th and B streets has hosted a series of businesses since the early 1920s, but the corner laundry became a haven for crime and bad behavior.

Transformations Thrift Store on South 14th Street is one of eight stores participating in the first Lincoln Thrift Store Crawl.

Racks of donated clothing fill one side of Transformations Thrift Store.

A variety of shoes for sale at Transformations Thrift Store.