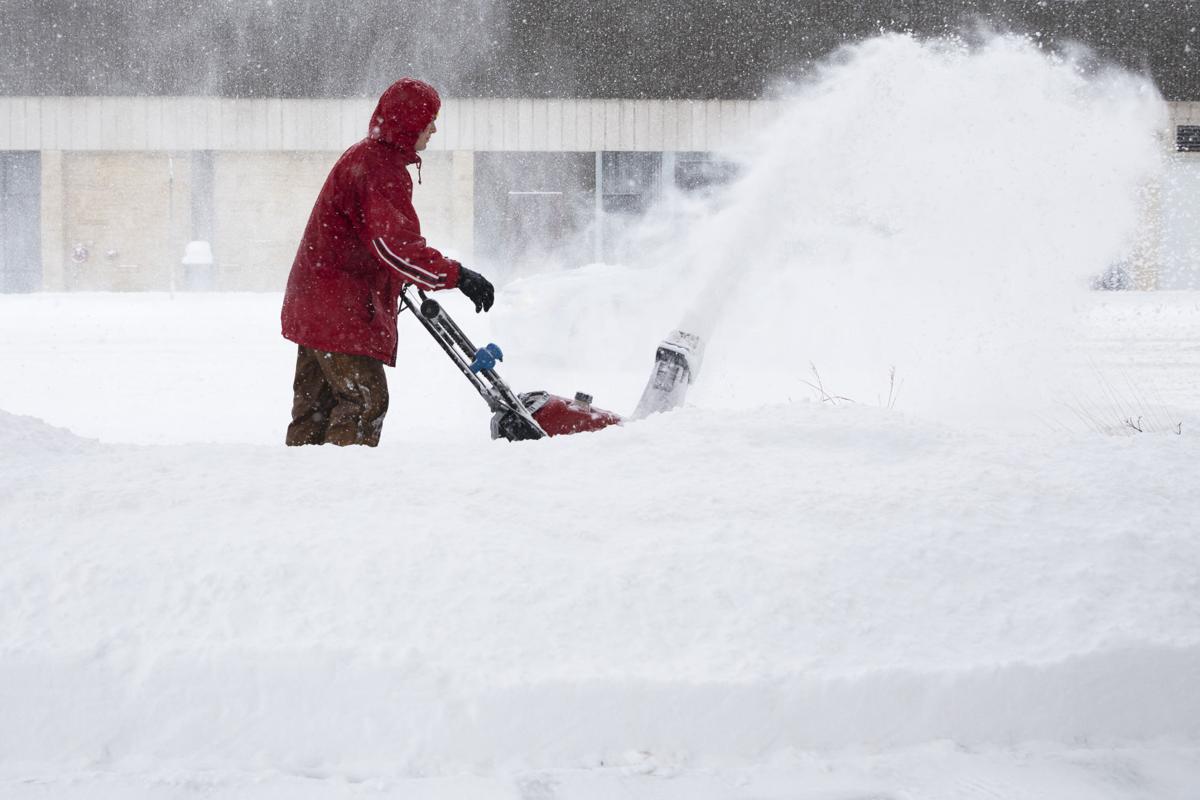 Workers try their best to keep snow from piling up during a winter storm in downtown Lincoln on Monday. 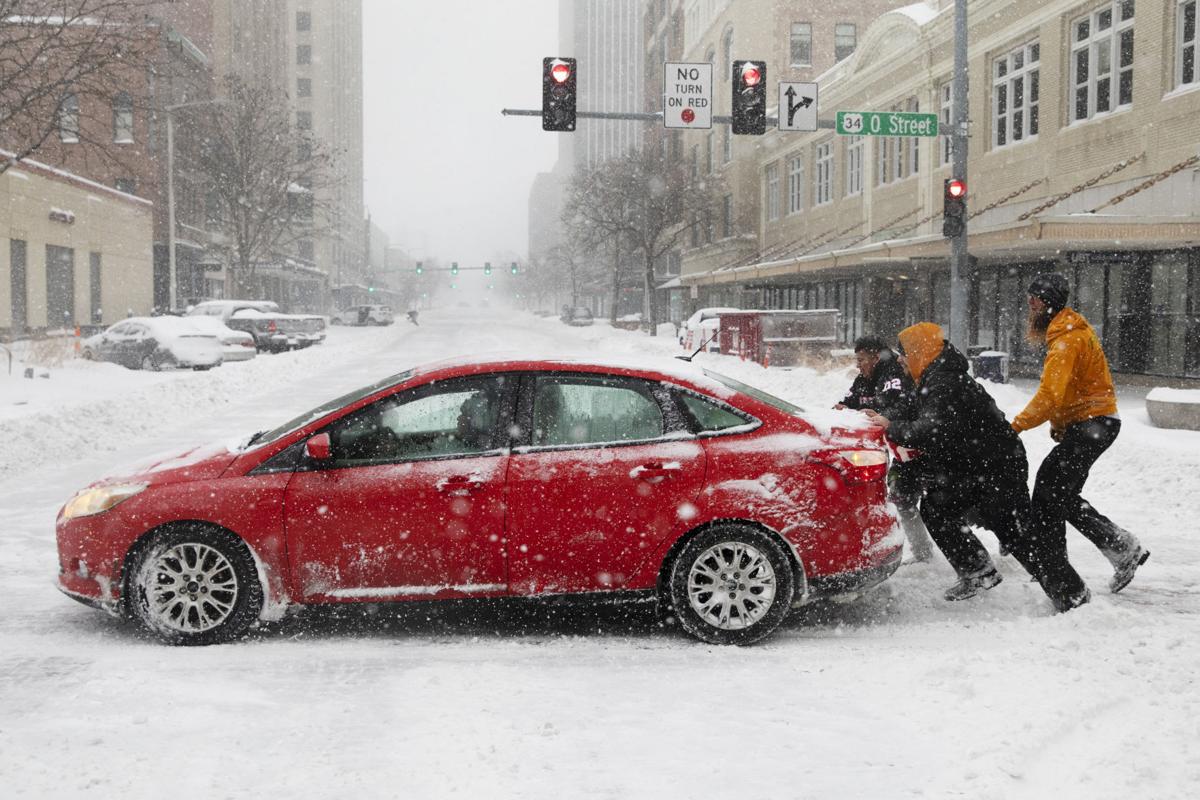 People push a car stuck at the intersection of 13th and O streets during a winter storm on Monday. 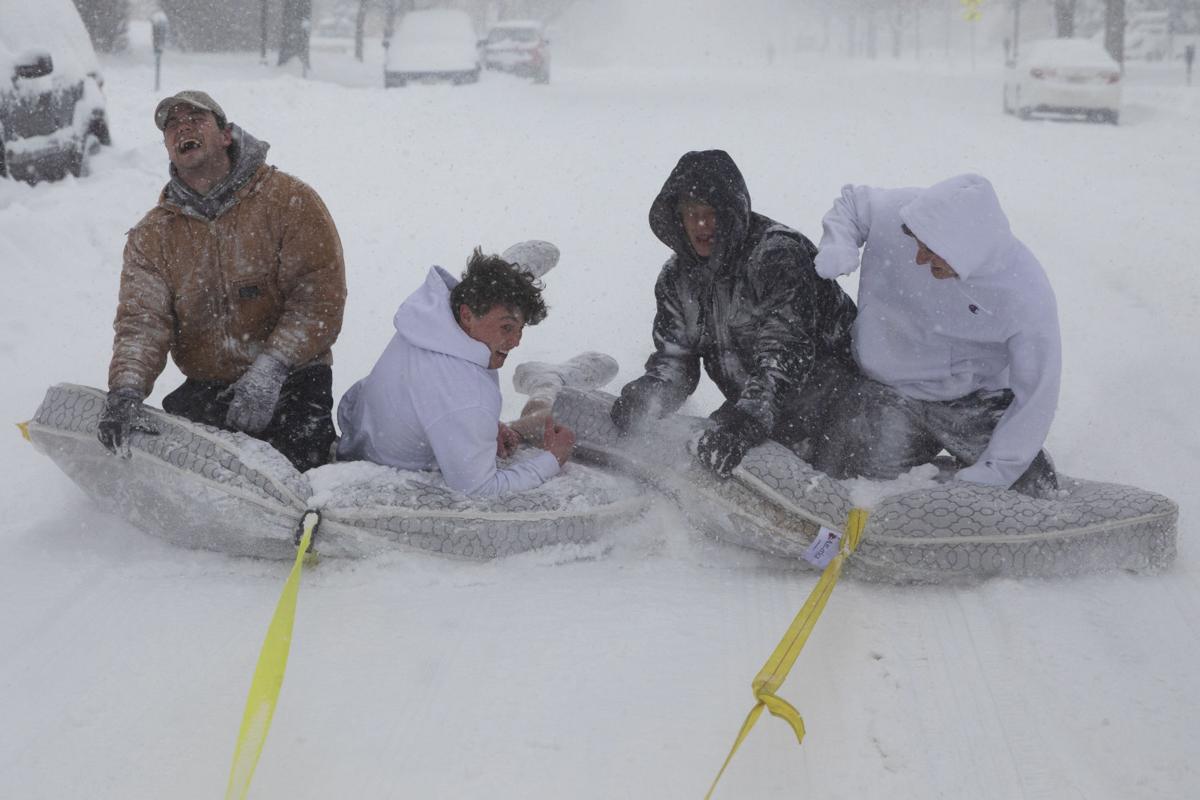 Phi Gamma Delta fraternity members ride mattresses along the street in front of the UNL Union during a winter storm on Monday.

The National Weather Service called it "historic" and "the big one."

The Weather Channel sent reporters to Lincoln and Omaha.

In the end, the winter storm that hit Lincoln and most of eastern Nebraska on Monday lived up to its billing.

By 7 p.m., snowfall had already covered the tops of footlong rulers in some locations, with the Lincoln Airport recording 13 inches, an all-time January single-day record.

Just how rare significant snows are in Lincoln is evident in the all-time snowfall records dating to 1948.

In all those winters, Lincoln had reached 10 inches of snow on a single day just five prior times.

"I love it," said John Baylor, the longtime voice of Nebraska volleyball matches on the radio who was taking his second pass scooping snow on a downtown sidewalk on North 11th Street.

"As long as nobody gets hurt, everyone's smart, everyone stays patient."

He said he was having fun and getting a good workout. "Gives you kind of a man versus nature feel."

"We don't have enough days where we're reminded … the environment is a beautiful, beautiful place," Baylor said.

The heavy snow essentially shut down the city. Lincoln Public Schools and all the city's colleges and universities closed for the day. The Lincoln City Council canceled its weekly meeting. Many city services also were shut down, including bus service.

StarTran started the day running normally, with some occasional delays. But by 2 p.m., with 10 of its 18 buses stranded and many of them having to be towed, the city announced it would shut down early for the first time since 1974.

“StarTran prides itself on being a dependable transit service through all types of weather, but we also want to make sure our riders and operators remain safe at all times,” Lincoln Transportation and Utilities Director Liz Elliott said.

The buses weren't the only vehicles getting stuck. On side streets and overpass approaches, countless cars found the heavy snow too much to overcome.

The span of Nebraska 2 stretching from the West Bypass to Van Dorn Park was a parking lot at times, travel complicated by a train that kept cars from diverting onto Park Boulevard.

Light to moderate snow started in Lincoln around 2 a.m. and intensified as the day went on. Between 1 and 5 p.m., the weather service estimated snow was falling at a rate of 1 to 2 inches per hour in Lincoln and surrounding areas. A winter storm warning that had been set to expire at 3 a.m. Tuesday was extended until 9 a.m.

The heavy snow and steady winds of about 15 to 20 mph made travel even more difficult in rural areas.

"Do not travel unless it's absolutely necessary," State Patrol Col. John Bolduc, superintendent of the Nebraska State Patrol, said during a morning news conference.

State Patrol spokesman Cody Thomas said people appeared to heed that warning as traffic volume on the state's roads was much lower than it usually is on a Monday. As of 9 p.m., Thomas said the patrol had responded to 28 crashes and had assisted 313 motorists who were stuck or had other issues.

By 7 p.m. Monday, Lincoln Police had responded to 22 crashes.

The city declared a snow emergency, banned parking on arterial streets and bus routes and also instituted a residential parking ban. There were more than 100 city crews and private contractors plowing both arterial and residential streets throughout the day, but they could not keep up with the snowfall rates.

Heavy snows of Monday's magnitude are rare in Lincoln, especially in January.

Monday's storm had "a good amount of moisture," said Brett Albright, a meteorologist with the National Weather Service in Omaha, and the track of the storm lined up perfectly to put Lincoln in the bull's-eye for some of the heaviest snow.

Other snowfall totals reported by the National Weather Service by Monday evening:

Retinal scan may show if you're at risk of early death

Gucci is under fire for using real tigers in ad campaign

Gucci is under fire for using real tigers in ad campaign

“This is what I would consider to be a historic event as far as snowfall,” said Taylor Nicolaisen, a meteorologist at the National Weather Service's Valley office. “We typically don’t see this kind of snowfall at this time of year.”

All LPS classes, in-person and remote, along with student activities, practices and rehearsals are canceled. UNL also canceled Tuesday classes.

LPS called snow days Monday and Tuesday, but won't have students doing remote work as both Millard and Omaha public schools chose to do.

The official snow total for Lincoln on Monday was 14.5 inches, the second most on record.

Residential street plowing is the slowest operation because of the obstacles posed by on-street parking, winding roads and the network of intersections.

Storm has Lincoln hospitals scrambling to get employees to work

Some employees stayed overnight while others got rides with coworkers who have all-wheel drive vehicles.

Lincoln's postmaster said mail is being delivered where possible but that "we've had a difficult time getting around the city, just like everyone else."

Highs this weekend are forecast to only reach the teens, and wind chills likely will be below zero.

After a record-setting snow in Lincoln last month, residents are bracing for a stretch of winter weather not experienced in several years.

The city budgeted about $5.3 million for winter roads operations and will -- by the end of the fiscal year -- will spend about $6.5 million.

Workers try their best to keep snow from piling up during a winter storm in downtown Lincoln on Monday.

People push a car stuck at the intersection of 13th and O streets during a winter storm on Monday.

Phi Gamma Delta fraternity members ride mattresses along the street in front of the UNL Union during a winter storm on Monday.