‘She thinks she’s a puppy’ — Confused calf saved by horses, raised by humans in Lincoln
View Comments
Share this
{{featured_button_text}}
1 of 4 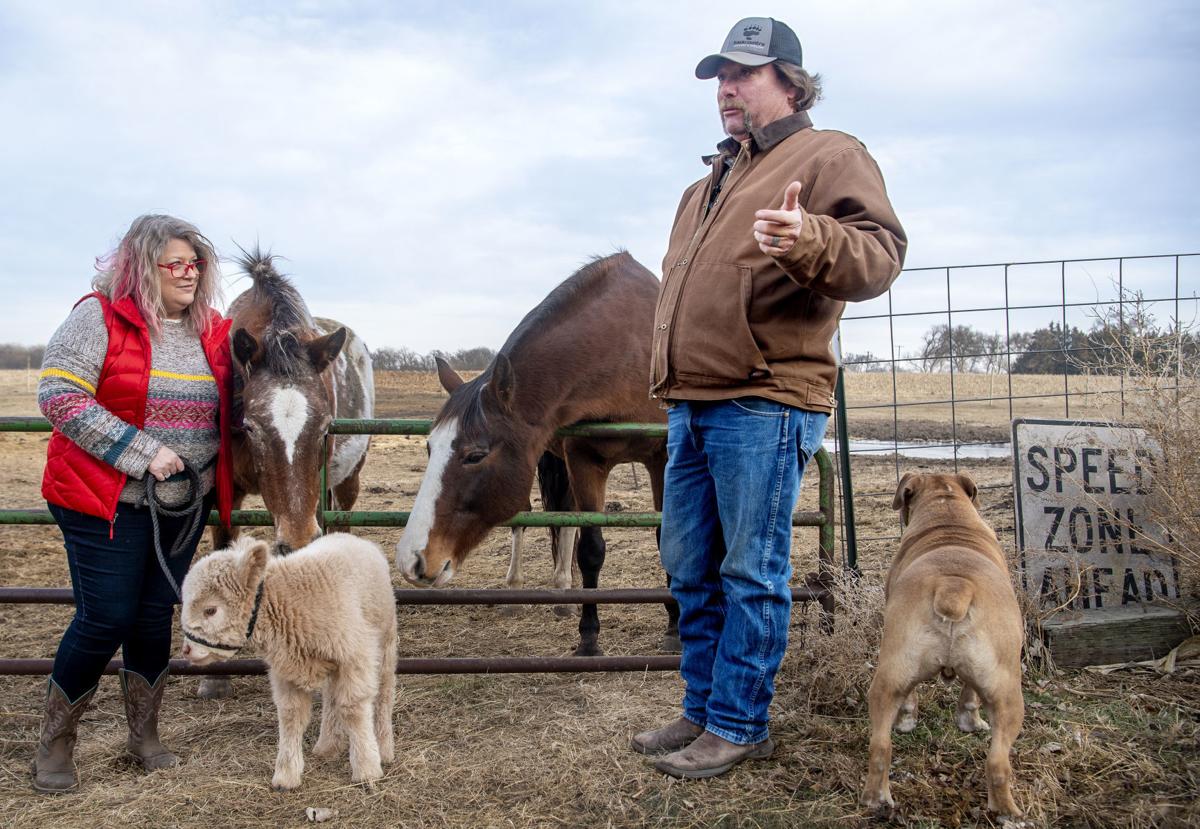 "She's a little miracle baby, that's for sure," said Kevin Lewis, describing Patty Jo, a Scottish Highland calf born premature two days before Thanksgiving at their farm near Pioneers Park. Lewis and his wife, Toni, were alerted to the calf by their horses Sunday and Poncho. Also in the picture is Grizzly, a neighbor's dog. 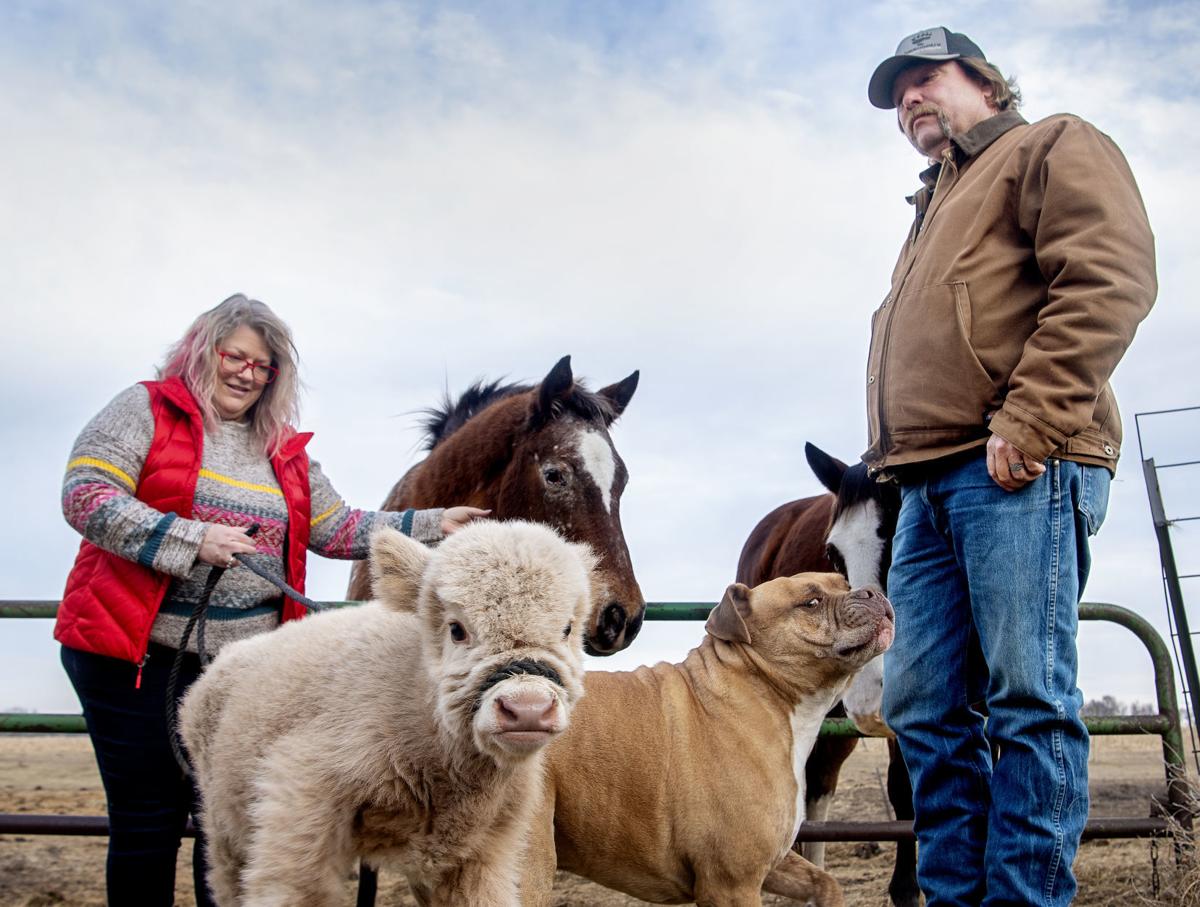 Toni and Kevin Lewis show off Patty Jo, a Scottish Highland calf born premature at their farm near Pioneers Park. They were alerted to the calf by their horses, Sunday and Poncho. Also seen in the picture is Grizzly, a neighbor's dog. 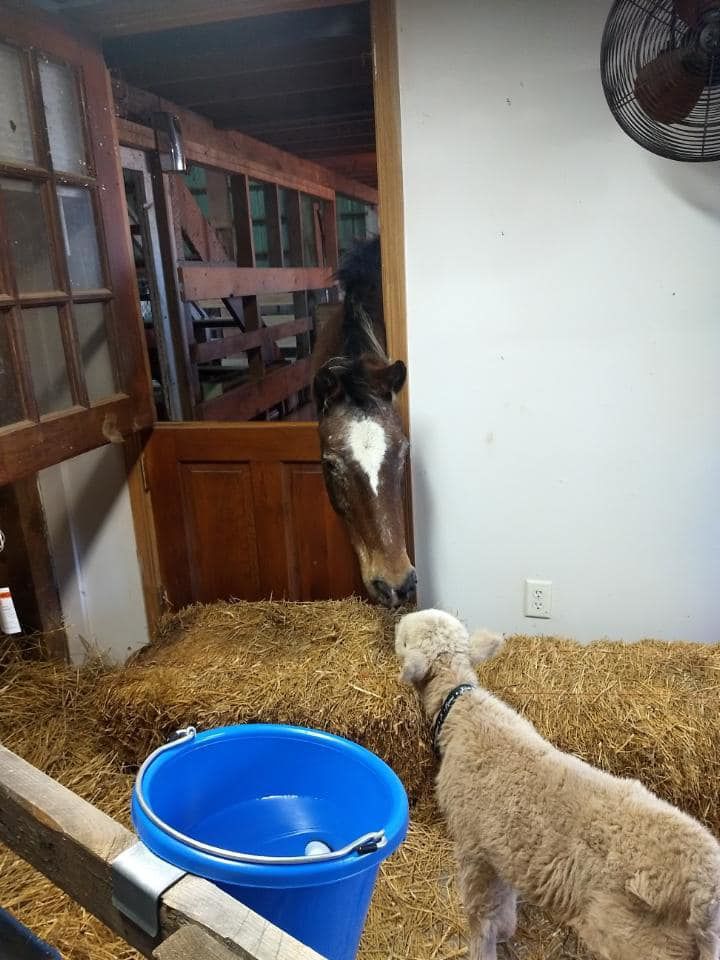 Sunday, a mare, checks in on Patty Jo a week after finding the calf abandoned in the pasture. 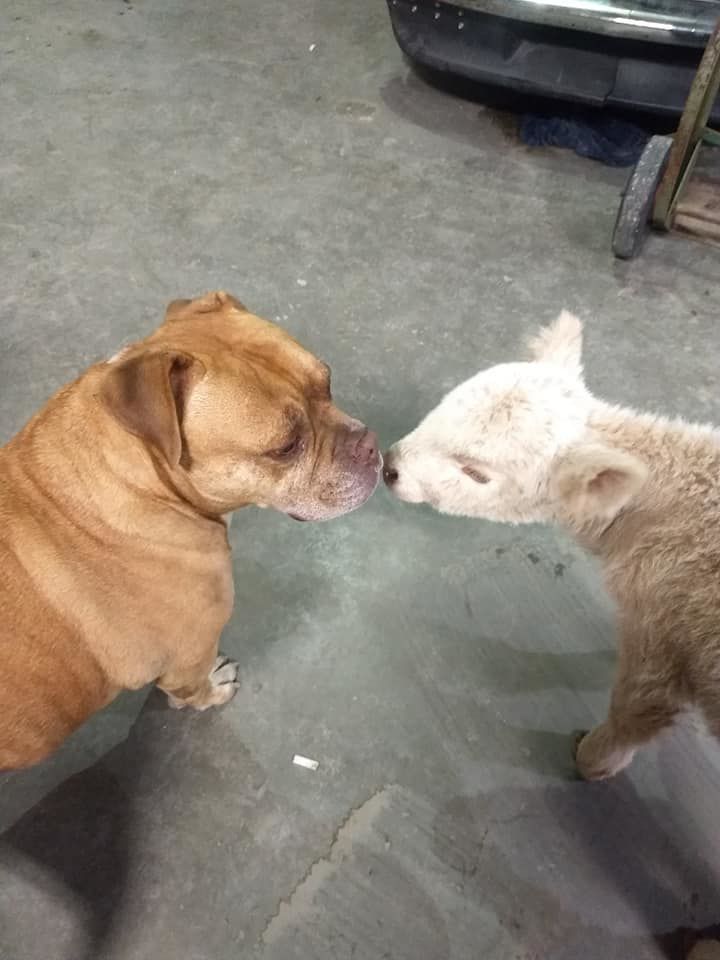 Grizzly and Patty Jo get to know each other a few days after the calf was born.

She’s as long-haired and buff-colored as the other Scottish Highland cattle Toni and Kevin Lewis keep as pets, but she’s having an identity crisis.

She likes her neck scratched. She wags her tail. She loves to go for rides.

Said Kevin: “She thinks she’s a puppy now, I think.”

A lucky puppy who owes her life to a pair of horses, her humans and their friends and neighbors. If they all hadn’t come together late last month, Patty Jo would have been frozen in the pasture, and not drawing hundreds of likes and loves on Toni’s Facebook page.

The cows were Toni’s idea. She grew up watching her father raise geese and peacocks, and traveling to exotic animal shows to buy and sell birds.

“They usually had these funny kinds of animals, like Scottish Highlands. And I always said I wanted to get one.”

They got their first a couple of years ago, rehoming it from Hastings. And then they got another, and another, and a bull, and soon they had nine roaming their pasture. Including Emma, who was expected to calve this month.

But two days before Thanksgiving, Kevin woke early and headed out to take care of the animals before work.

“The horses were kind of acting weird,” he said. “One was kind of running around, crazy whinnying.”

That was Poncho, tearing around the pasture and running to the barn and back, doing laps and trying to tell him something. Their mare, Sunday, was locked in place, licking something dark and crumpled on the ground.

Kevin shot a short video with his phone and then got closer.

“I just saw the baby calf laying there. I jumped the fence and ran and grabbed the calf and ran to the barn.”

The animal was just 25 pounds, less than half of her full-term weight, and as limp as a dishrag.

She was also wet and cold, so Kevin and son Ben got to work toweling her off. The barn wasn’t warm enough, with the temperature barely above freezing that morning, so they carried the calf to their heated shop.

But Kevin had to go to work, so he called his mother, who lives on the property.

“He’s, like: ‘Well, Mom, what are you doing today?’" Toni said. "She stayed in the shop and tried to keep her (the calf) warm for most of the day.”

More help arrived. A neighbor who raises dairy cattle brought a bottle with a tube that reached the calf’s stomach, to make sure the calf got the colostrum she needed.

A veterinarian friend urged them to keep the animal warm, so they drew a warm bath for her in a feed tub.

Another neighbor arrived to help the calf find her feet, and spent a half-hour propping her up.

They didn’t forget about the calf's mother. They tried to reunite the two, but Emma was having nothing to do with the calf. They put her in a chute to try to draw milk, but the cow was dry.

“Usually, the motherly thing kicks in,” Toni said. “But it didn’t for her.”

So it was up to Patty Jo's humans. They rigged a dog bed with heating pads and a blanket, and Kevin spent the night in the shed by the baby’s side, trying to get her to eat.

The next day, she was drinking half of a bottle. Then a full one. Patty Jo — named after Kevin’s mother, who spent that first touch-and-go day with her — has grown stronger since, up to nearly 50 pounds now.

“By Thanksgiving, she was like a whole new cow,” Toni said.

But not quite. She’s acting more like a dog, tolerating her Christmas sweater, following her humans around the farmyard and checking in with the other animals, especially the horses that found her in the pasture, Toni said.

While much of Nebraska was still fighting floodwaters and tallying tragedy, this soon-to-be-viral story was a refreshing surprise – sort of like a cold beer at the end of long, hard day.

Peter Salter's most memorable: Numb to it

Drew Wolfe would talk about his family’s flood-scarred farm, but only if we visited in person. I’m glad we did, because there was no way to appreciate the scale of the damage without seeing it. Even then, we needed a math professor to help calculate the volume of Platte River sand that had swallowed Wolfe’s 200-acre cornfield: 800,000 cubic yards, or enough to fill 67,000 dump trucks.

Most of Lincoln had likely never heard of the Goodyear Fitness Center, but the former elementary school served Havelock for decades, a meeting place where strangers became friends, a gym where retirees could take care of themselves and each other, and as a remnant of the factory that helped build the neighborhood.

This story spanned a century and much of the globe, from Germans from Russia meeting and marrying in Lincoln’s South Bottoms, to the attack on Pearl Harbor, to a team of scientists at Offutt Air Base trying to identify the mixed-up remains of 400 sailors and soldiers. But it’s also a story about pain and patience, and a Lincoln family that waited 67 years to be able to say goodbye.

This story hit close. I’ve had three recent heart procedures at the same hospital. The days before were already anxious and frightening, and I had nothing but the compassion of my co-workers. I couldn’t imagine the stress that would come with taunting, teasing and a toe tag.

"She's a little miracle baby, that's for sure," said Kevin Lewis, describing Patty Jo, a Scottish Highland calf born premature two days before Thanksgiving at their farm near Pioneers Park. Lewis and his wife, Toni, were alerted to the calf by their horses Sunday and Poncho. Also in the picture is Grizzly, a neighbor's dog. 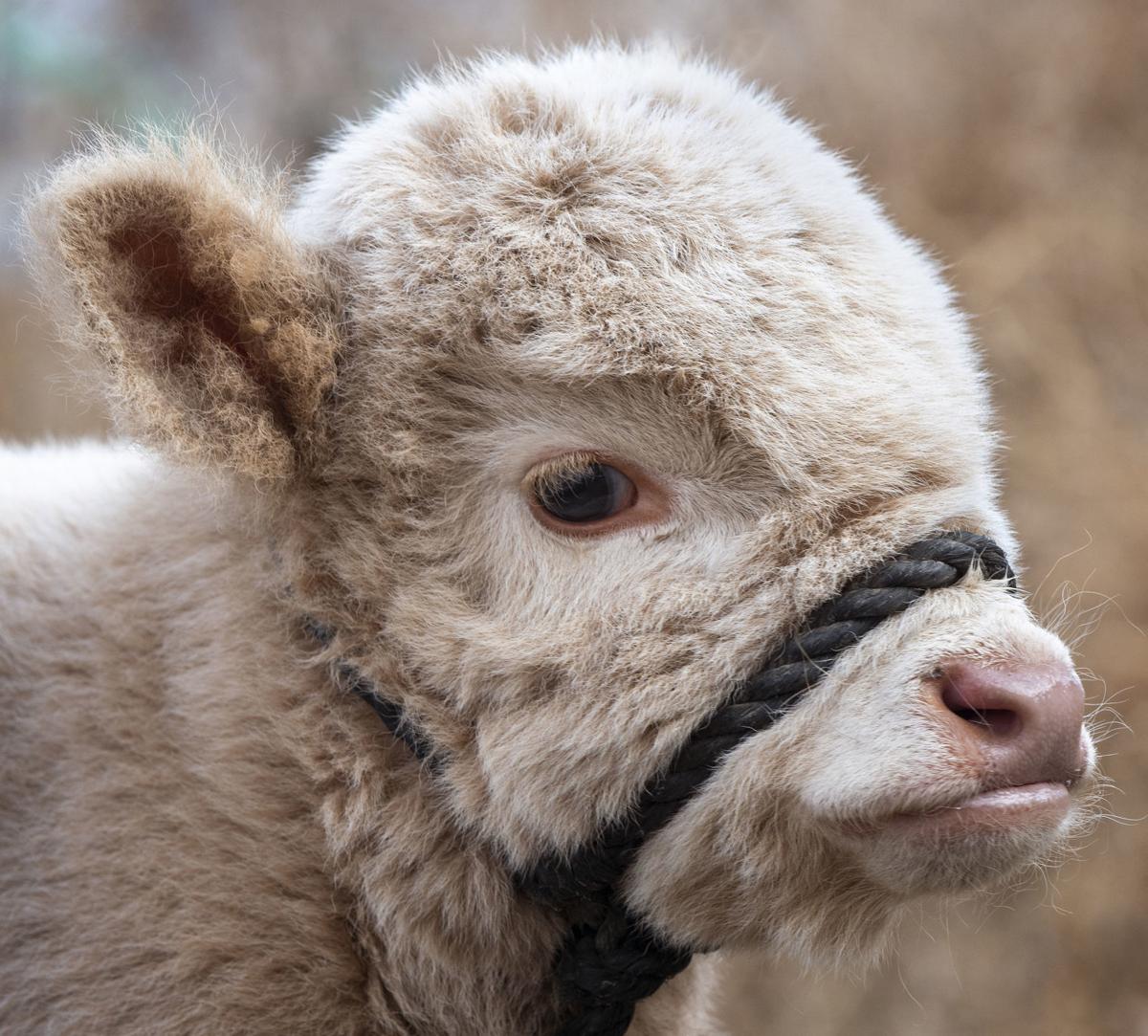 Born premature two days before Thanksgiving, Patty Jo has doubled her weight to about 50 pounds. She could eventually reach 1,000. "She'll be a spoiled cow for sure," said Kevin Lewis, who found her in the pasture that morning nearly dead.

Toni and Kevin Lewis show off Patty Jo, a Scottish Highland calf born premature at their farm near Pioneers Park. They were alerted to the calf by their horses, Sunday and Poncho. Also seen in the picture is Grizzly, a neighbor's dog. 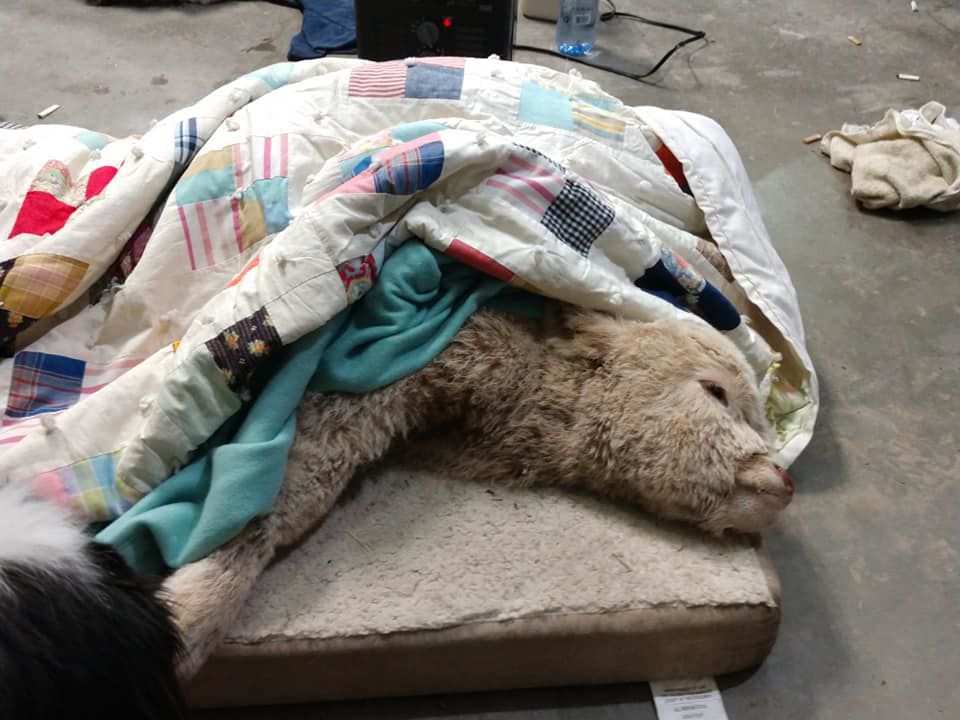 Patty Jo spent her first few days in a dog bed with heating pads and blankets.

Sunday, a mare, checks in on Patty Jo a week after finding the calf abandoned in the pasture. 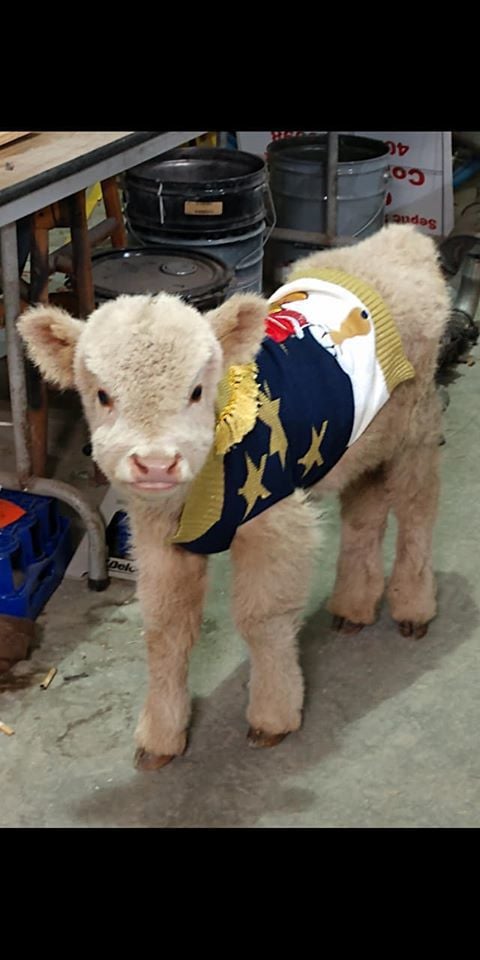 Grizzly and Patty Jo get to know each other a few days after the calf was born.