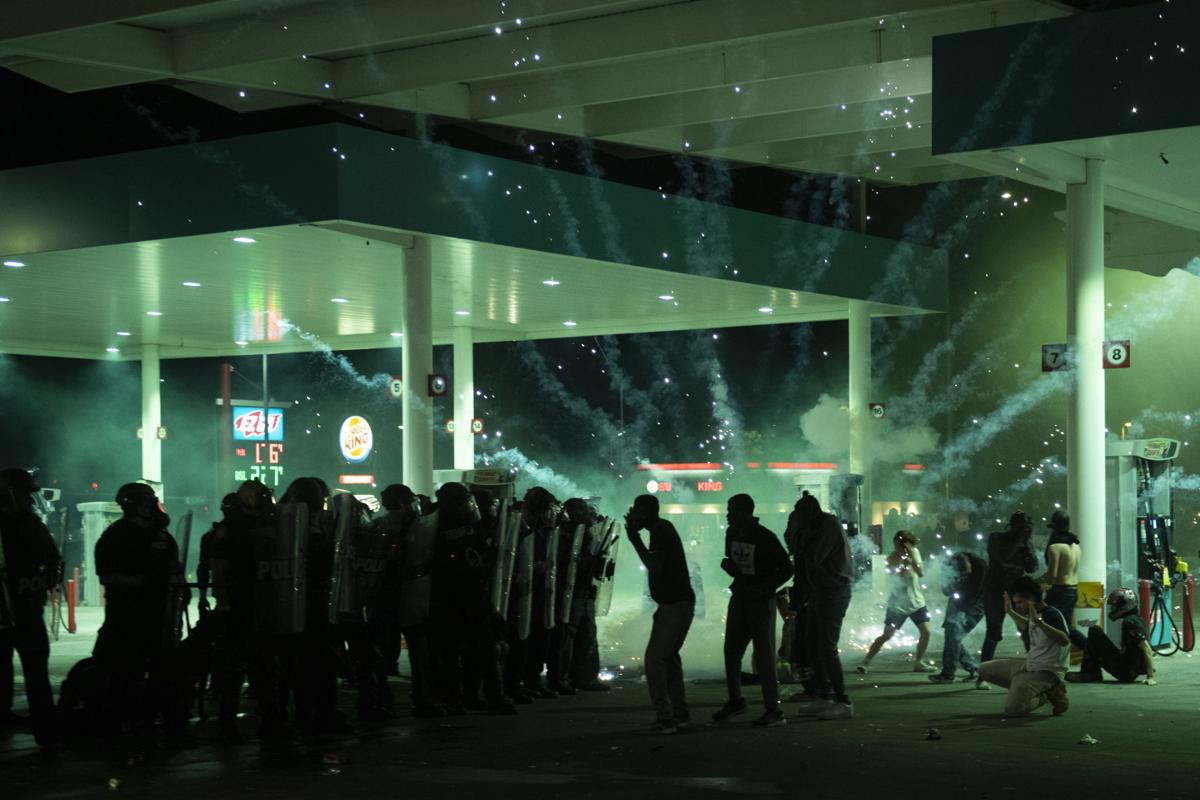 A firework explodes between protesters and police outside the EZ GO at 25th and O streets Saturday morning. A small number of people protesting the death of George Floyd at the hands of a police officer in Minneapolis turned violent, breaking store windows and threatening police. 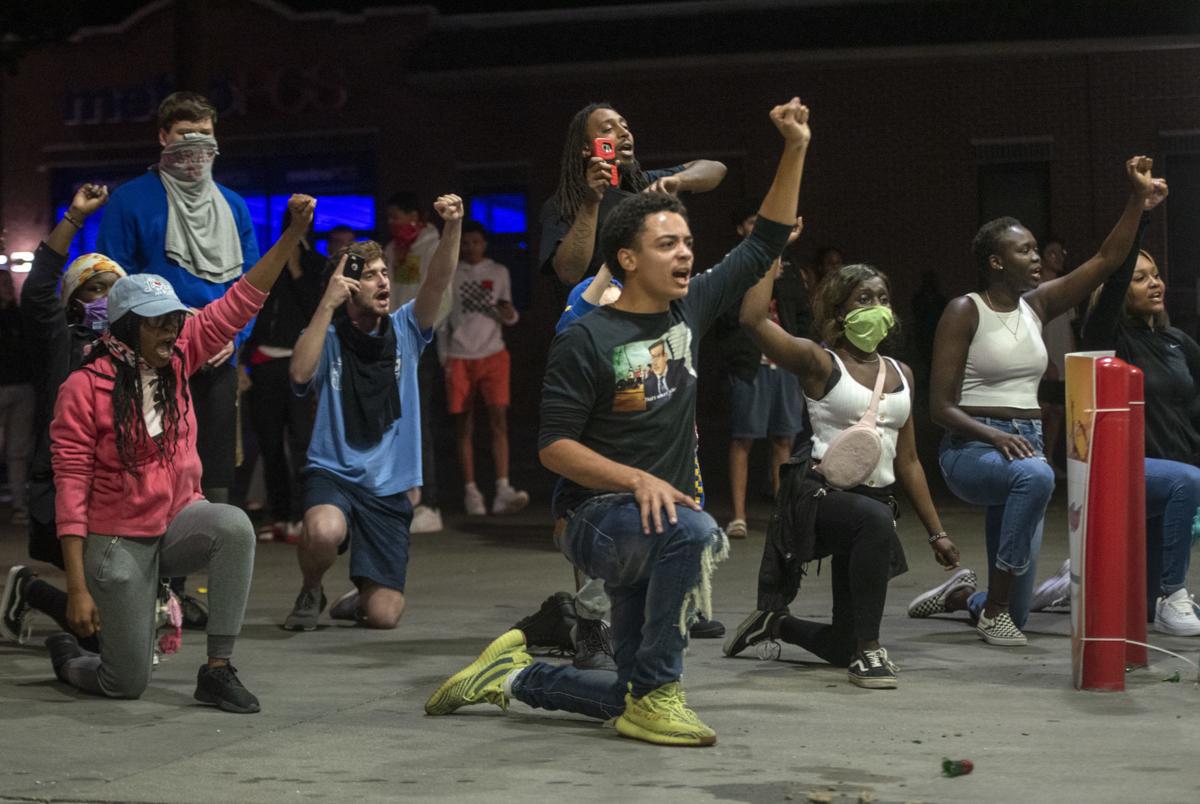 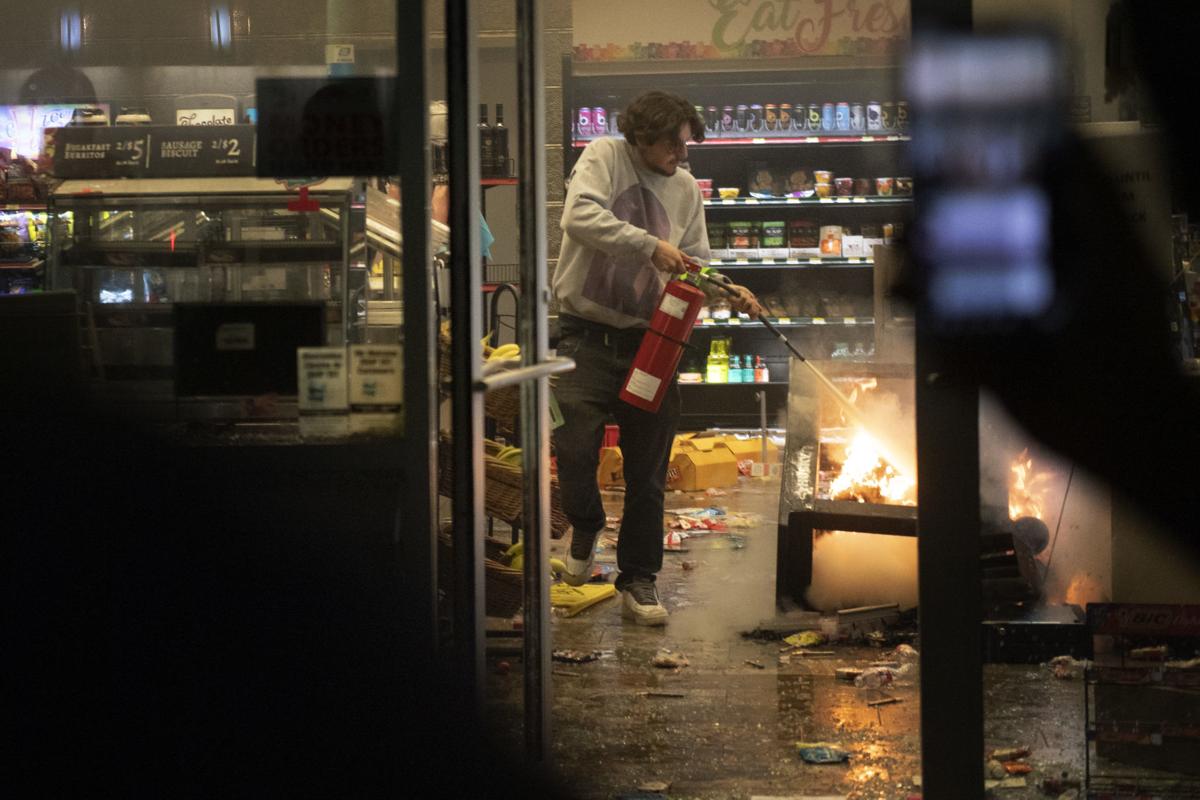 A man extinguishes a fire after vandals looted the EZ Go at 25th and O streets. 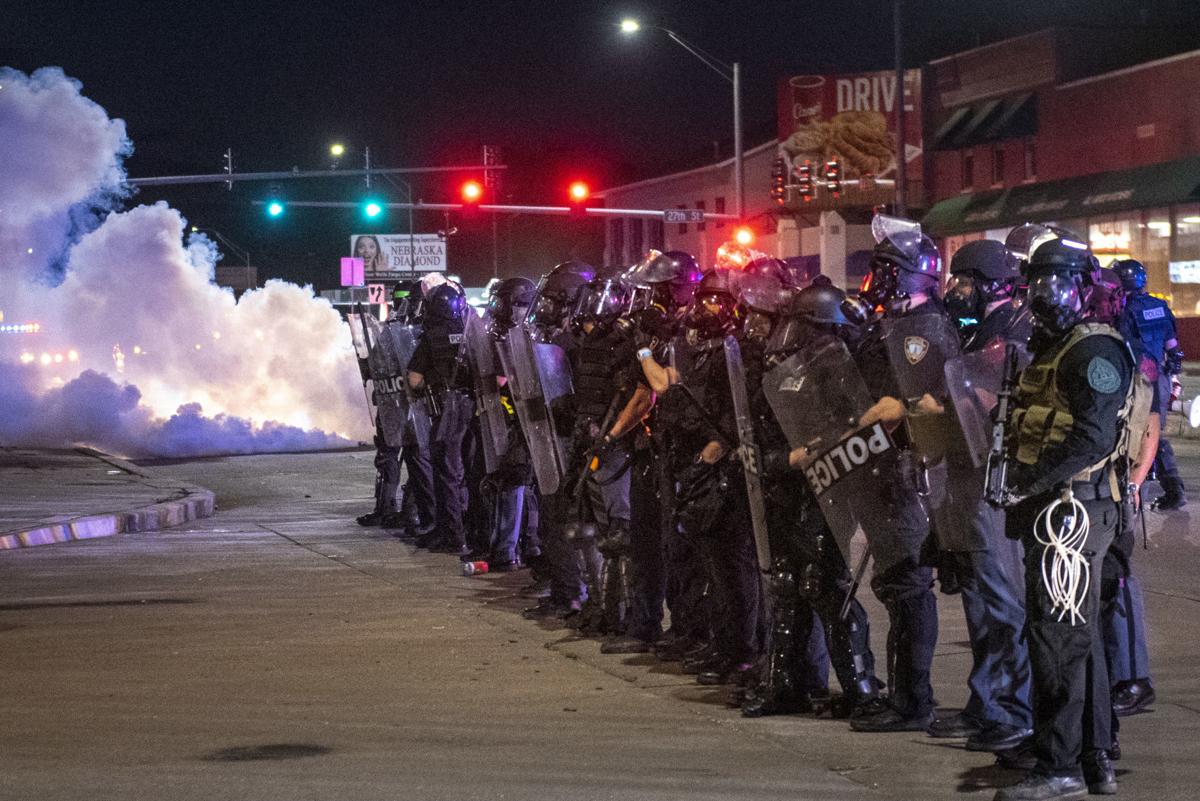 Police deploy tear gas to push back the remaining crowd near 26th and O streets on Saturday morning.

Joining other city leaders Saturday morning in a passionate plea to keep protests peaceful, Lincoln City Councilwoman Sändra Washington said she understands the frustration, anger and grief of everyone touched by the death of George Floyd at the hands of a police officer in Minneapolis this week.

And the frustration over "every incident that has happened over my entire lifetime, as black men and women are killed senselessly at the hands of those who are supposed to protect us," she said.

Washington said she was horrified that another black man had been killed senselessly. But she feels safe in Lincoln and had been proud to say just a day earlier that we have never reacted in violence here.

"I woke up this morning to find out that we now have. And that makes me very sad," she said.

Protesters returned to the streets Saturday evening, largely peaceful protests that followed the violent and destructive actions of early Saturday, that injured eight police officers, including one who required staples to his head, and a protester who was hit by a car.

The events early Saturday morning, centered near 27th and O streets, resulted in three arrests and prompted a mid-morning news conference with Mayor Leirion Gaylor Baird, the police chief and all seven council members in attendance.

At the podium, Washington said she knows it's difficult to put all these things together and to respond compassionately and peacefully.

"But I am begging all of you who feel a need to raise your fist or to throw a stone, to stop for one moment and think about the fact that each of us are someone's loved one," she said.

An organizer for a Black Lives Matter protest planned Sunday at the State Capitol said he is working to keep the event peaceful.

Organizer Kameron Neeman said he began coordinating with the Lincoln Police Department on the event days before an impromptu protest early Saturday morning at 27th and O streets turned violent.

Neeman said it's important to him, and to many others, to hold the protest now, the same week of George Floyd's death at the hands of a Minneapolis police officer.

“His murder is so fresh,” Neeman said. “It was so important for me to host this right away.”

He said the event's posting on Facebook has 5,000 people recorded as interested or going. Participants will wrap around the building, he said.

Only hours earlier, Lincoln police, joined by members of the Nebraska State Patrol, used rubber bullets and tear gas to disperse the crowd that gathered near one of the busiest intersections in Lincoln.

The overnight protest, which included perhaps 200 people at 2 a.m., turned violent after police said a westbound vehicle traveling at a low speed struck a woman who was in the street and left the scene.

The crowd surrounded the responding police vehicle and ambulance, and a window was broken at the nearby EZ Go Store at 26th and O streets.

The relatively few officers who were on the scene at that time grew to a force by 3:30 a.m., many equipped with riot gear.

Protesters were seen inside the convenience store, where looting was reported, and windows were knocked out at another nearby business, the MetroPCS.

In a tweet posted at about 5 a.m., the Lincoln Police Department noted that the gathering is "no longer a peaceful protest."

"Arrests have been made and will continue to be made for those who continue to break the law. Neighbors in the area please shelter in place."

In an on-scene briefing, Chief Jeff Bliemeister asked people not to come to the area, and he told people already there to go home.

The crowd mostly broke up as more light crept into the morning sky.

Police said they did not have any information on the condition of the pedestrian who was hit. Police said they had spoken with the driver of the vehicle, but that the investigation continued.

At mid-morning, Bliemeister said officers were investigating nine reports of vandalism linked to the protest, and that three people had been arrested for failing to disperse.

But Bliemeister added that we shouldn't let the violent actions of a very small group of people in Lincoln detract from the overall message.

"That's really what's happening, because this becomes the focus — the violence, the destruction. Not the murder of George Floyd."

Bliemeister said it's not enough for individuals to say they won't be part of that violence and asked that they let their friends and children know that "this doesn't happen in the city of Lincoln."

Bliemeister said Lincoln police will have more officers on duty over the weekend should further issues pop up. Police have worked this week with organizers of a planned rally Sunday afternoon near the Capitol.

On Saturday evening, protesters returned to the streets, marching across the city —  from the Capitol, to the County-City Building, down O Street toward 48th and R streets and back toward downtown.

As the protesters passed 27th and O, the scene of Saturday morning's protest, the EZ Go was dark. Other businesses along O Street closed early.

Attempts to block traffic on O Street were mostly in vain, with protesters walking and riding bikes among cars and trucks driving across the city.

The protests sparked in Lincoln were similar to those all over the country, as people vented their frustration over what they see as poor treatment of minorities by police. Protests that started in the Minneapolis area spread to several large cities.

In Omaha, the World-Herald reported that police used tear gas Friday to disperse hundreds of people who blocked one of the city's busiest intersections and smashed windows of an empty furniture store after a peaceful gathering earlier in the evening.

Gov. Pete Ricketts, in a statement, condemned the destruction of property in that "distracts from the memory of George Floyd" and thanked law enforcement for their work in managing the protests.

“Thank you to the significant majority of protesters who were peaceful last night," Ricketts said. "Peaceful protest is the right way to exercise our First Amendment rights.”

Back in Lincoln, Washington said what happened in Minneapolis gives rise to a national conversation "that needs to happen, that has happened in fits and starts for centuries."

Speaking along with Gaylor Baird and fellow council members Bennie Shobe and Jane Raybould, Washington asked everyone to think of this as an opportunity to continue the conversation or start one if they've never participated before.

The Associated Press contributed to this report

Saturday night's violence followed less than 24 hours after incidents on Saturday morning centered in the area of 27th and O streets.

But volunteers showed up early Sunday morning to clean up near downtown.

Someone was shot and killed near a downtown Omaha demonstration over the death of George Floyd in which protesters clashed with police in riot gear, authorities said.

Speakers called for justice -- but also repeatedly urged the crowd to remain peaceful, after what began as peaceful protests turned violent Saturday night and prompted the mayor to issue an 8 p.m. curfew Sunday and the Nebraska National Guard to offer support.

A Nebraska State Trooper kneeling with protesters for 9 minutes, a solemn moment marking the amount of time a Minneapolis police officer knelt on George Floyd's neck before his death, as Lincoln's fourth night of protests remained peaceful.

The white bar owner who shot and killed a James Scurlock, a 22-year-old black Omaha man will not be charged, Douglas County Attorney Don Klein…

Citizens are encouraged to file their protests, which will be accepted through June 30, electronically or by mail to help prevent the spread of the virus, the county clerk said.

A firework explodes between protesters and police outside the EZ GO at 25th and O streets Saturday morning. A small number of people protesting the death of George Floyd at the hands of a police officer in Minneapolis turned violent, breaking store windows and threatening police.

A man extinguishes a fire after vandals looted the EZ Go at 25th and O streets.

Police deploy tear gas to push back the remaining crowd near 26th and O streets on Saturday morning.