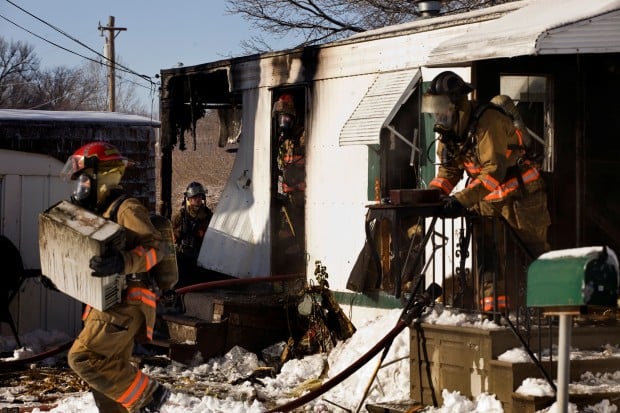 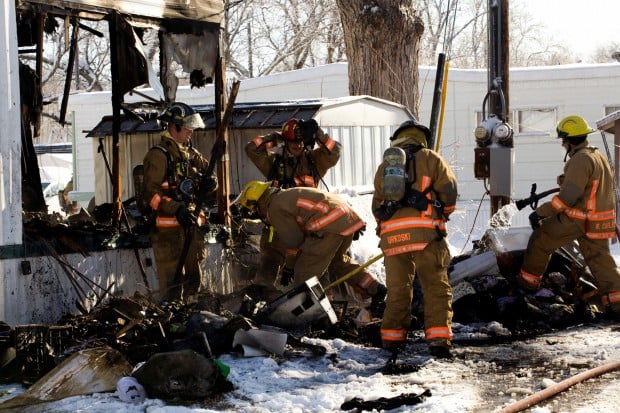 Neither snow, nor rain, nor heat, nor gloom of night stays Lincoln U.S. Postal Service couriers from the swift completion of their appointed rounds -- nor from leaping to action when fires threaten life and home.

On Thursday, a mail carrier spotted a fire in a mobile home just north of 48th and Vine streets near Riley Elementary School, called 911, checked to be sure everyone was safely out of the home, and then continued delivering the mail, Lincoln Fire and Rescue Battalion Chief Derald Murrell said.

When firefighters reached lot 93 of Sky View Homes mobile park at 12:30 p.m., the flames had gutted the back of the trailer and worked their way to the front, Murrell said.

With the flames contained, firefighters hunted down hot spots and pulled charred belongings from the home, throwing them in a sodden pile in the snow. An electric guitar, a still-smoking chest of drawers, a suitcase, a bag of clothes, a melted plastic shovel, all piled together with chunks of pink insulation and bits of white siding.

The mobile home had no electric or gas service, and it appeared the residents had tapped into a neighbor’s electric meter and run an extension cord under the trailer and through the floor, then rigged it to an outlet. More extension cords ran off the outlet, powering a refrigerator, toaster, microwave oven and space heater.

The fire is believed to have started at a point where clothing and a bucket full of tile pieces and tools were set on top of a cord, Robbins said.

He said a woman who was sleeping in the trailer when the fire started was awakened by the heat.

The home had no working smoke detectors.

Robbins said extension cords should not be used as permanent wiring, and people using them need to be careful not to overload them.

Officials had yet to contact the owner, who was out clearing snow and doesn’t have a phone, Robbins said.

Authorities offered to connect the woman with the American Red Cross, but she left before they could, Robbins said.

Officials with the U.S. Postal Service said the carrier who reported the call was too busy with the increased holiday deliveries and trudging through the snow to give an interview.

The debate about COVID-19 vaccine passports