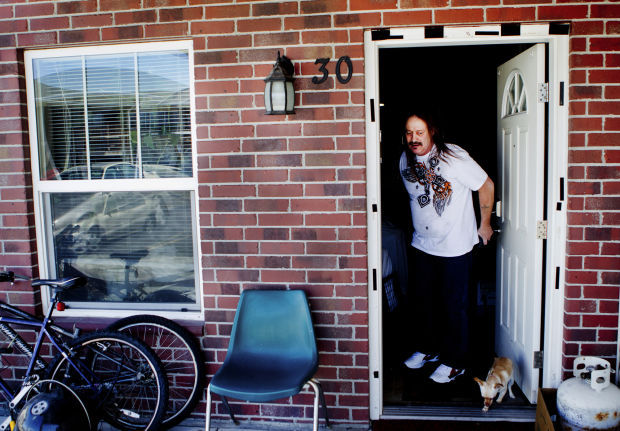 Rick Britt and his dog Molly used to live in a tent but in 2014 moved into an apartment because of the CenterPointe housing program. Last year, the agency's programs helped 373 people find homes. 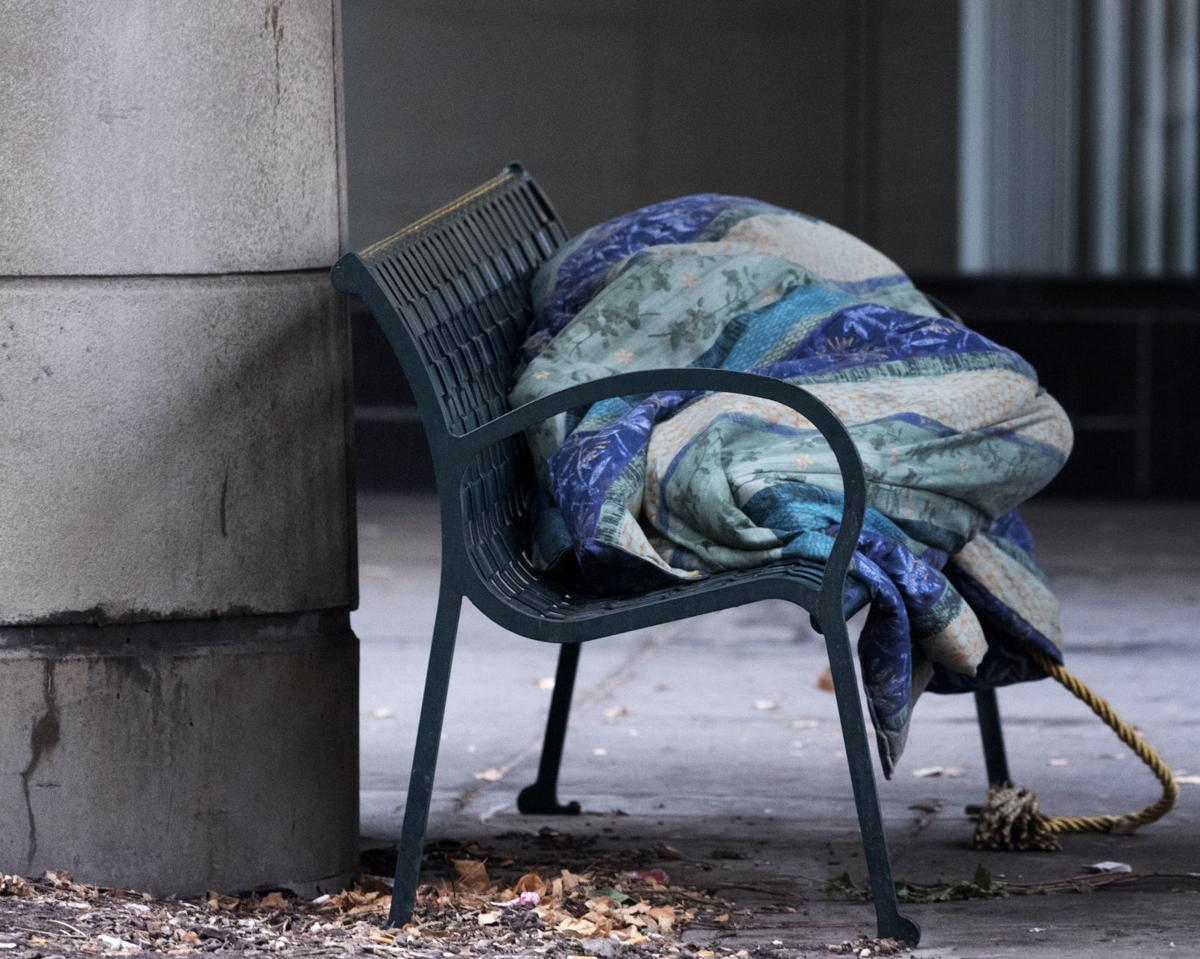 A homeless person sleeps on a bench under the O Street skywalk in this October file photo.

They’ve met each Thursday for more than a year now in a conference room near 26th and P streets, the same item on their agenda appearing week after week: Identify and help the most vulnerable people in Lincoln.

A dozen representatives from the agencies and offices that work with homeless people all turn to the same screen displaying a database of risky behavior and sad situations. The men and women on this list had, at some point, answered a series of uniform questions about their habits and health designed to quantify the danger they're facing.

How long have you been homeless?

Have you ever been beaten?

How often have you checked into an emergency room?

Are you wanted by the law?

Have you resorted to prostitution?

Do you have anything that brings you enjoyment, or are you just getting through the day?

“The higher you score, the more vulnerable you are,” said John Turner of Region V Systems, one of the agencies at the table every week. “And really, the more likely you are to die on the streets.”

The Most Vulnerable Review Team’s goal has been to get Lincoln's most chronically homeless off of the street, under a roof and receiving the services they need. For their drug and alcohol abuse. For their mental and physical health problems. For their inability to find and keep jobs.

But money has been tight, apartments scarce, and some weeks, those at the meetings have been able to help only the most vulnerable and chronically homeless person on the list, the others having to wait until the next meeting, or the meeting after.

That's changing. Last month, Matt Talbot Kitchen and Outreach announced a $200,000 federal grant to pay for 15 apartments. And this week, CenterPointe, Region V and the Mental Health Association provided details on about a $1.9 million grant for services to support those they intend to place in 60 additional homes.

So the hope now is to officially end chronic homelessness in Lincoln, something known as functional zero -- where the city has more beds available than it does chronically homeless people.

“That’s the goal,” Turner said. “We know everyone, we’ve assessed everyone and we have a plan for everyone.”

The list of Lincoln’s most vulnerable contained 63 people last week -- but the effort is focused on those also considered chronically homeless.

That means they have a disability and have been continuously homeless for the past 12 months or were homeless four times for a total of 12 months over three years.

Last week, 38 people met that description, said Jeff Chambers, director of the University of Nebraska-Lincoln Center on Children, Families, and the Law.

Most were men, most were white. Their average age was 47, though they were as young as 21 and as old as 62. Their periods of homelessness ranged from one month to 132. Nearly 85 percent were sleeping in places not meant for human habitation, like apartment laundry rooms, abandoned porches or their cars.

They’re often the least desirable renters. They have a history of evictions. They've run up unpaid utility bills. They’ve left damaged apartments in their wakes.

But those who serve Lincoln’s homeless are embracing what’s known as the Housing First approach: Put a roof over someone’s head -- without requiring their commitment to recovery or sobriety, without a credit check or background check -- and they’re more likely to then get the intensive support they need, to take better care of themselves.

CenterPointe, which has long offered behavioral health and substance abuse help, has provided homes with a Housing First approach since the 1990s. Last year, 373 people were housed through CenterPointe programs, and 97 percent of them had been homeless, said Director Topher Hansen.

“People aren’t going to get better if they’re living on the streets,” Hansen said. “We see this as a critical link to help the people we serve get better.”

Some will still drink, said Turner. But instead of killing a bottle of vodka and crashing in an alley, maybe they’ll have a few drinks before going to bed.

“If you put me in an apartment, I’m going to like the fact I’m not on the streets anymore,” he said. “I’m going to work a little harder.”

The $1.9 million, three-year grant will pay for the support homeless people need to stay in their new homes.

It paid for CenterPointe to hire two peer support workers and two case managers. It paid for Region V to add a housing coordinator and an assistant. And it paid for the Mental Health Association to hire a supported employment worker and a half-time benefit analysis expert.

Together, they’ll help people find and keep apartments and jobs, get them enrolled in treatment programs and provide the health and support services they need.

“The focus is retention. The system talks a lot about housing people, which is what we’re doing,” Turner said. “But it’s really hard to keep them housed.”

Still, he said, it’s worth it to try. The most chronically homeless people can tax the system. Several years ago, providers calculated the cost of the 13 highest users of Lincoln’s emergency system, like ambulances, the jail and detox. The total: $700,000.

The grant can’t pay for rent, so Region V is allocating 60 housing vouchers -- 30 in 2017, then 15 each of the next two years -- to put people in apartments. The vouchers cover rent, security deposit, utilities and furniture.

In some cases, Region V will also help ease the fears of reluctant landlords by promising to pay for damages.

“We’re coming to the table and saying, 'If there’s a problem, call us. We’ll take care of it,’” Turner said. “That’s something that I offer to landlords so they answer my phone when I call.”

And that can be the tricky part of Housing First initiatives.

Matt Talbot Kitchen and Outreach is just starting to fill 15 apartments -- its first tenant moved into a place Monday -- and has been meeting with potential property owners.

So far, Matt Talbot has verbal agreements with seven landlords and property managers to work with the nonprofit as it fills its next 14 apartments, which it hopes to do by March.

Turner has found larger property management companies to be the least cooperative. But he’s been able to build relationships with private landlords, like Jack Irons.

There is a risk of Housing First tenants falling off the wagon and damaging an apartment, Irons said. Still, there’s a risk with any tenant.

“Anybody in the real estate business understands you’re going to have good and bad tenants.”

But there’s also a reward with these tenants and lots of success stories. He’s watched some kick their addictions and reunite with their families.

“I think everybody comes across hard times one way or another. I believe in their program, and I believe in helping people that need help.”

The groups will begin filling the next 30 apartments in January. The list of Lincoln’s chronically homeless will get shorter as providers shoot for functional zero, the official end of chronic homelessness.

But the Thursday meetings at CenterPointe will continue.

Dozens of dogs left in Afghanistan after U.S. evacuation

In plan to end homelessness, Matt Talbot will find, pay for apartments

Matt Talbot Kitchen and Outreach, which has long served hot meals to the homeless during the day, will soon offer them something warm at night, too.

The children had been living in a storage unit, the back of a car and in rented rooms.

A 59-year-old homeless man who sleeps on a bench in downtown Lincoln knew Wednesday he'd wake up cold the next morning.

Randy Hawthorne, executive director of the Nonprofit Hub and Volunteer Partners, will receive the first Lincoln Luminary Award at the Winter L…

The name of Sunday's gathering -- Writers Resist -- only sounds negative.

Searching for homeless out in the cold, snowy night

They spent nearly an hour looking behind dumpsters and in the darkest corners of downtown alleys and in the warm, bright stairwells of several…

'A significant drop' — Homelessness in Lincoln cut in half since 2012

The streets were emptier that night in late January, when a team of volunteers searched the city looking for Lincoln’s homeless.

It’s time for your brother to move out of your basement.

Rick Britt and his dog Molly used to live in a tent but in 2014 moved into an apartment because of the CenterPointe housing program. Last year, the agency's programs helped 373 people find homes.

A homeless person sleeps on a bench under the O Street skywalk in this October file photo.