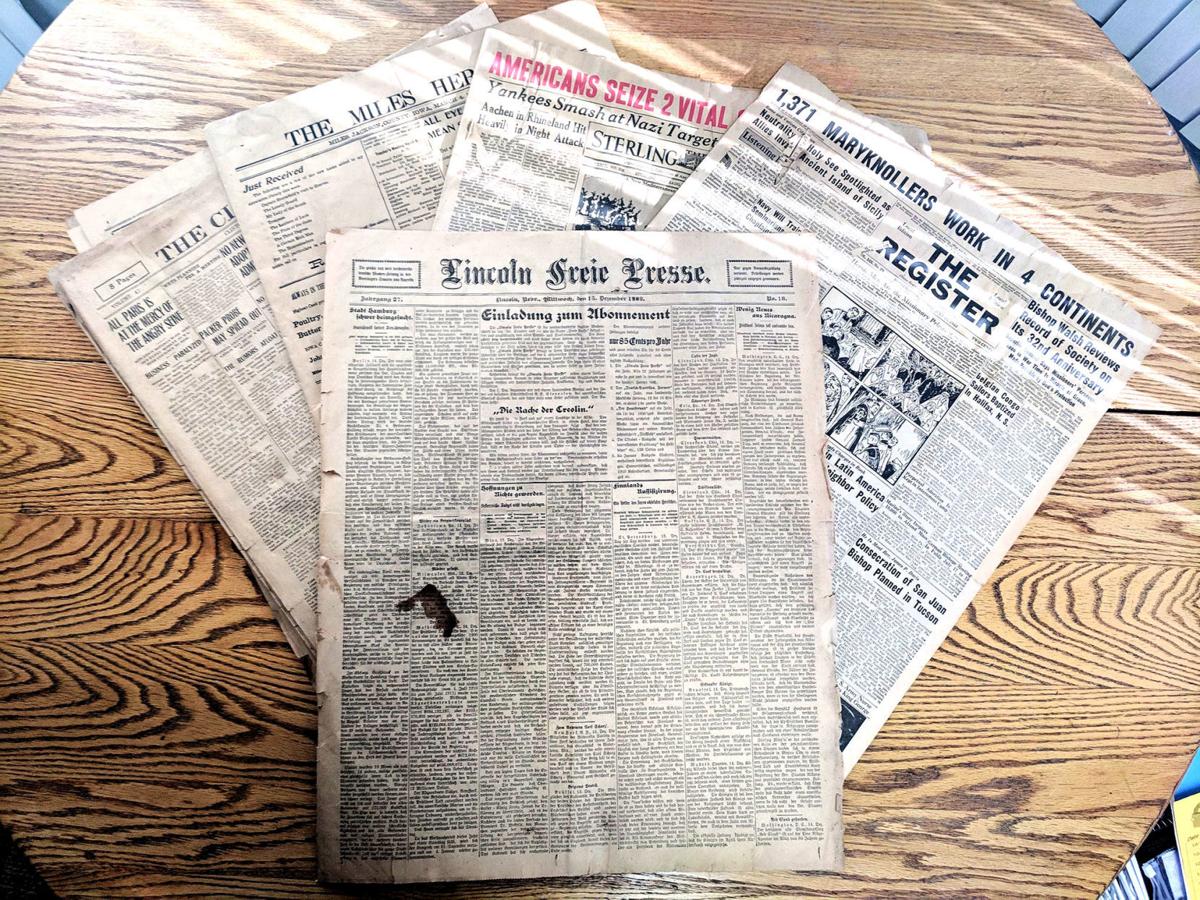 Of the five old newspapers a North Dakota woman found behind an antique mirror, the oldest was a 1909 copy of the Lincoln Freie Presse, a German-language newspaper. 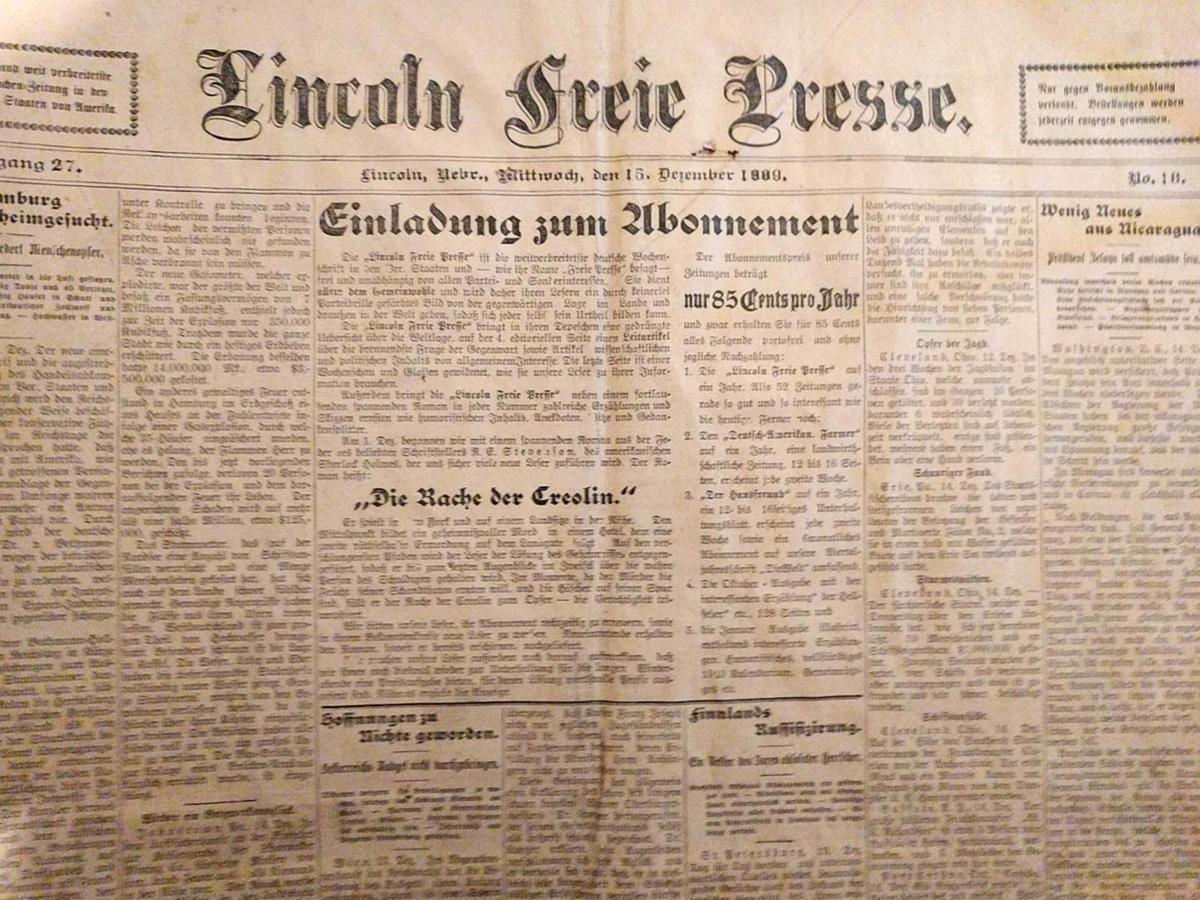 An antique beveled mirror, 4 feet by 2 feet, its plain wooden frame on the verge of falling apart. She loaded it into her car and carried it home.

“It was really cool,” she said. “But it sat in our basement for six months until I decided what to do with it.”

And that’s when she spotted her second treasure. From behind the mirror’s backing, she pulled out an old newspaper. And then another, and another. She ended up with a stack of five papers from three states, spanning 1909 to 1943.

The oldest? The Lincoln Freie Presse, a newspaper that had served the city’s growing German population — many of them immigrants from Russia — in their own language.

At the time the paper was published, Germans from Russia and their descendants made up a third to a fourth of Lincoln’s population, said Sherry Pawelko, executive director of the American Historical Society of Germans from Russia.

The men were recruited to work on the railroads, the women often found jobs cleaning homes in affluent areas. Salt Creek flooded their own neighborhoods north and south of downtown regularly, so land in the Bottoms was cheap.

But the people were proud, Pawelko said. They built houses with higher foundations to withstand the water. They kept their sidewalks swept and scrubbed. They raised big families. And they didn’t forget where they came from.

They also kept track of what was happening in their homelands.

“The news was very important to them,” she said.

She was familiar with Die Welt Post — The World Post — another German-language newspaper published in Lincoln in the early 20th century, but she’d never heard of The Free Press until Narveson contacted the Journal Star.

The news behind the mirror had left the North Dakota woman with questions she’ll likely never answer. Who collected these papers and packed them behind the backing? How did they end up on a curb, 50 miles from the Manitoba border?

She’s searching the internet and working her phone, trying to return them to where they came from. Denver and Sterling, Colorado. Clinton, Iowa. Lincoln.

The papers are too valuable to simply store or throw away. “I love history, especially the pieces you can hold in your hand,” she said. “And there’s too much history here to let go.”

The Journal Star called Pawelko, who studied a photo of the Freie Presse’s front page from Dec. 15, 1909, and was able to make out a few headlines.

The biggest? An invitation to subscribe to the weekly, 85 cents a year.

Another headline translated to The Revenge of the Creole.

Another: A Little News from Nicaragua. Strange choice for the front page of a German newspaper in Lincoln.

“I don’t know why that would be important to them,” she said.

But the history is important, and Pawelko is grateful Narveson is sending it to the society, perhaps the same newspaper’s second delivery to the South Bottoms, nearly 110 years after the first.

Lincoln's oldest park, at the center of renewed attention

From twig to pig: A love story in central Lincoln

She planted the tree more than 30 years ago, just after they bought the house near Wyuka Cemetery.

'The engine was cutting out' — Denton couple together in plane crash, recovery

He wrangled animals that could have done damage — desperate dogs, 5-foot alligators, a 200-pound Burmese python, a jaw-snapping badger.

When sauerkraut became liberty cabbage: How World War I changed Lincoln — and the map of Nebraska

They had to change the route because 13th and M street was getting repaved, but that didn’t dampen the 1910 German Day parade.

Of the five old newspapers a North Dakota woman found behind an antique mirror, the oldest was a 1909 copy of the Lincoln Freie Presse, a German-language newspaper.