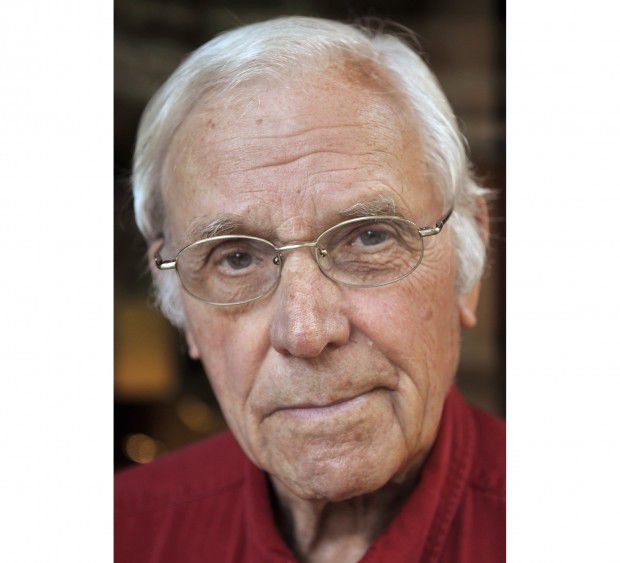 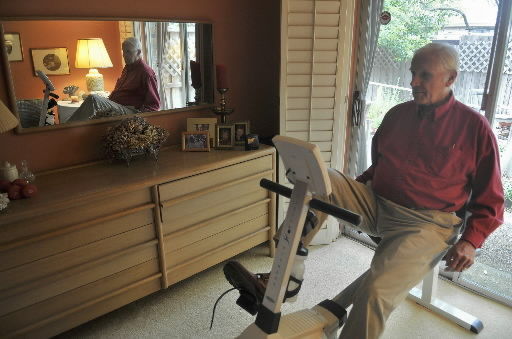 Norbert Tiemann works out on his stationary bicycle at his home in Dallas in 2009. Tiemann says he is not bitter that bringing sales and income taxes to Nebraska cost him re-election. (Journal Star file photo) 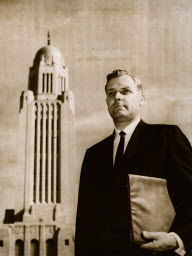 Norbert "Nobby" Tiemann, the man cited by scholars as Nebraska's most significant governor in the modern era, died at his home in Dallas on Tuesday night at the age of 87.

Creation of a state sales-income tax system, state aid to schools, the University of Nebraska at Omaha, the state Department of Economic Development and collective bargaining for public employees all occurred on his watch.

Tiemann, a Republican, was defeated for re-election in 1970 by Democratic nominee Jim Exon after encountering stiff opposition within his own party.

In 1966, Tiemann burst onto the political scene as a 42-year-old banker from the small town of Wausa in northeastern Nebraska. First, he defeated a former governor, Val Peterson, in the Republican primary election. Then, he swept past Democratic Lt. Gov. Phil Sorensen, the younger brother of Ted Sorensen, former chief aide to President John F. Kennedy, in the general election.

When he took office two months later, state government had no visible means of support because Nebraska voters had wiped out its fundamental property tax support system in the same election.

Faced with the choice of replacing the property tax with a state sales tax only or a combination sales-income tax system, Tiemann chose the latter. And, in the process, he alienated a conservative Republican base that had reason to believe a small-town banker had been a safe choice.

"If it had just been a sales tax, it would have been unfair to lower-income people," Tiemann said during an interview in 2009.

The combination of taxes also created a revenue stream large enough to launch state aid to schools, Tiemann said. And it cleared the path for advances at the University of Nebraska, allowing the university to raise its academic sights and expand its reach by transforming the financially-troubled Municipal University of Omaha into UNO.

By the time Tiemann faced re-election in 1970, he had enraged many conservatives in his own party who opposed establishment of a state income tax and who wanted a limited state government constricted by a smaller revenue base.

The brash, bold and often combative young governor also clashed with associates of conservative Republican Sen. Roman Hruska when he came striding onto the stage.

Staunchly conservative state Sen. Clifton Batchelder of Omaha challenged Tiemann in the Republican primary and bloodied him in advance of his general election showdown with Exon, whose victory that November launched a political career that led to two gubernatorial terms followed by three terms in the U.S. Senate.

Forty years after his governorship ended, Tiemann was a little-known figure in Nebraska despite his history-making achievements, partly because he was gone from the state for a long time, but largely because neither political party claims or extols him today.

Republican Gov. Dave Heineman issued a brief statement describing Tiemann as "a dedicated public servant (who) cared deeply about Nebraska and our citizens."

Republican Sen. Mike Johanns, a former governor, expressed admiration for Tiemann's "passion for governing and the active role he played in the lawmaking process."

Among other firsts in the lengthy Tiemann record were bond financing for highway construction, a state minimum-wage law, a state fair-housing law and establishment of regional mental retardation services.

Former Republican Rep. Doug Bereuter said it was Tiemann and his 1966 campaign that inspired him to return to Nebraska after completing his military service.

Tiemann's "burst of progressive initiatives" produced a record of achievement "really unmatched in the modern history of the state," Bereuter said.  "He was a man of great integrity and the conviction to do what is necessary."

Bereuter was one of the so-called "whiz kids" who advised Tiemann and later served in his administration in the Department of Economic Development. In 1978, Bereuter was elected to the House and represented Nebraska's 1st District for more than 25 years.

"Nebraska without Governor Tiemann would be a hugely different place today," Beermann said Wednesday. "He was a great leader for our state at the right time, a very forward-thinking person who never let politics get in the way of what he perceived needed to be done."

Nebraska historian Frederick Luebke has described the Tiemann years as "gubernatorial leadership that was unprecedented in its activist or dynamic qualities."

In a 1990 assessment of the Tiemann years, Luebke wrote that Tiemann was "willing to take risks more daring than those of any of his predecessors, (and) he paid the price of dynamic leadership."

In an interview three years ago, Tiemann said he told senators who were fearful about voting for the sales-income tax legislation that they could blame it all on him, and many of them did.

"I knew that meant there probably was no way I could get re-elected," he said.

But, Tiemann said, "I wouldn't do anything differently today."

Tiemann was born in Minden and was a graduate of the University of Nebraska. After his governorship, he was federal highway administrator from 1973 to 1977.

Plans for a memorial service in Nebraska are pending.

Flags to be lowered for former Nebraska governor

U.S. and Nebraska flags will be lowered to half-staff this weekend to honor former Nebraska Gov. Norbert Tiemann, who died June 19 at 87.

Change came to Nebraska 50 years ago with new tax system

Fifty years ago, Nebraska voters set the stage for enormous change that they did not see coming when they chose a small-town Republican banker…

Norbert Tiemann: One shot at change

Norbert Tiemann works out on his stationary bicycle at his home in Dallas in 2009. Tiemann says he is not bitter that bringing sales and income taxes to Nebraska cost him re-election. (Journal Star file photo)