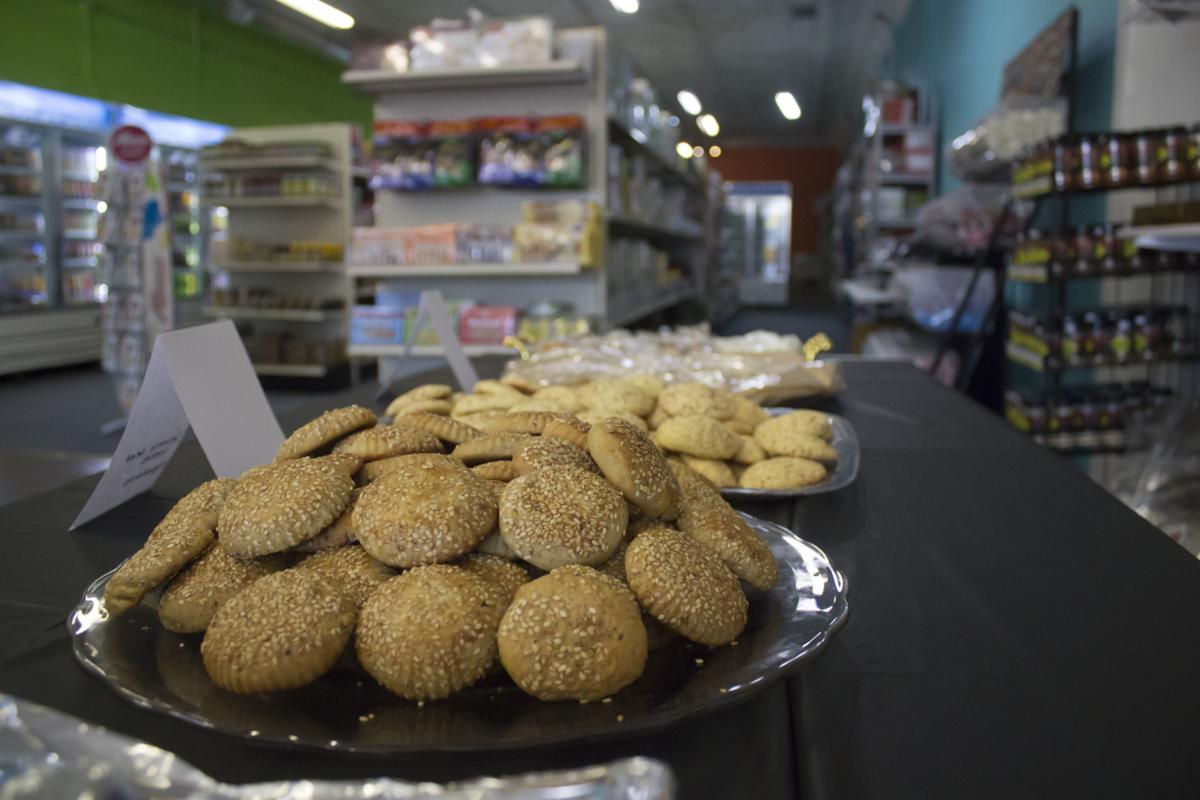 Baked goods are displayed at the sampling table at the Lincoln Mediterranean Market on Saturday. 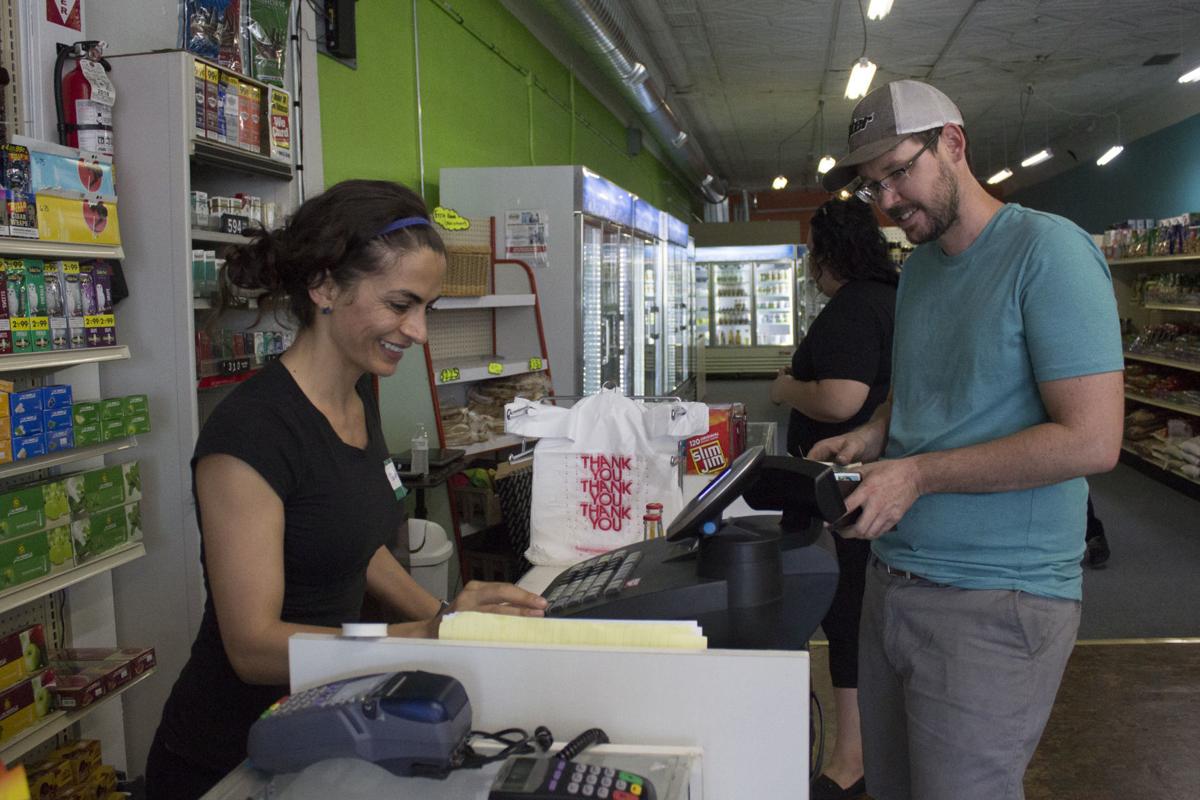 Gulie Khalaf rings up Aaron Moore's purchase at the Lincoln Mediterranean Market. The Khalaf family is among nearly 3,000 Yazidi refugees in the Lincoln, the largest group of Yazidis in the nation. 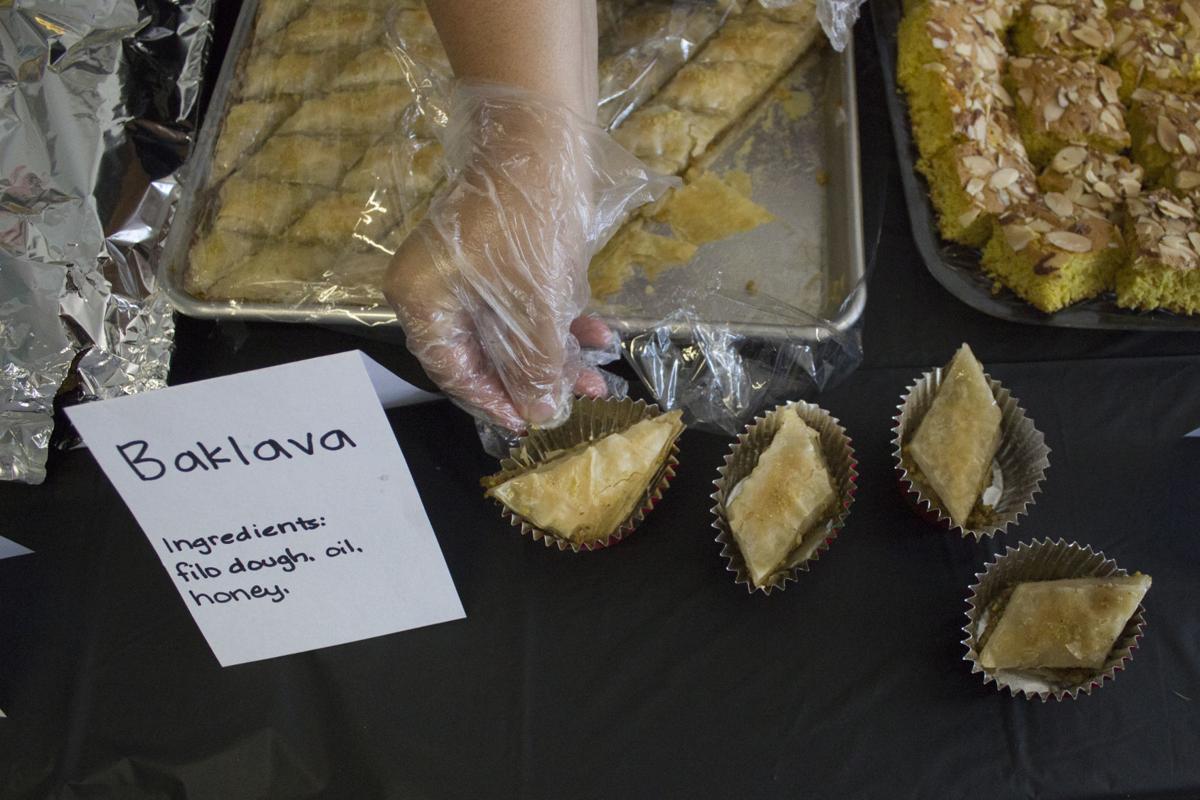 The new downtown grocery, at 1618 O St., offers a wide variety of items, and Gulie Khalaf, whose brother Tahsin owns the business, said they wanted to show the products off during a grand opening.

“People are sometimes hesitant to try unfamiliar things, so here’s their chance,” she said.

The store has been open for about a month, and has an expansive and organized selection, Gulie Khalaf said. It’s different from other specialty grocery stores in Lincoln because it’s bigger than most and Mediterranean-focused instead of Middle Eastern.

But the store includes Middle Eastern ingredients, beverages, prepared foods such as hummus and pickled items, and even fresh naan and pita breads by request. There's also hookah pipes and tobacco, household items such as teacups, naan griddles and candies.

Tahsin Khalaf and his family, who are Yazidi, wanted a grocery store in Lincoln to serve the local Yazidi community of about 3,000, Gulie Khalaf said.

“We wanted a place where (Yazidis) could place requests and find ingredients they were familiar with,” she said.

Inspiring the Yazidi community, as well as other immigrant groups, was another reason for opening the store. The grocery is Tahsin Khalaf’s first business, and Gulie Khalaf said they  hope it sets an example for others.

“We wanted to do something different, not just work in a factory,” she said. “Hopefully that is going to inspire people in the community to start doing something similar, because once you are a business owner, you’re able to employ others … (and) help support the community.

“So it gives you some power and with that, you’re able to empower others.”

Dilma Dilbreen, with her daughter Luna Murad, visited the store for the first time Saturday. She heard about it through Gulie Khalaf and took her time walking the aisles to find items she hadn’t been able to buy in other stores in the 19 years she’s lived in Lincoln.

“It’s nice to find familiar foods,” she said while holding a bag of whole lentils to make soup. She said she also plans to make ahpra, or rolled vine leaves, with ingredients from the store.

Mediterranean Market also has items Nebraskans would be familiar with, Gulie Khalaf said. Especially since the store is in a downtown location many Lincolnites have been wanting. She said her brother hopes to serve anyone who is in the area.

“We want to focus on Mediterranean products but serve all customers,” she said. “If they don’t want a water they’re not familiar with, (Lincoln Mediterranean Market will) provide Ice Mountain or Aquafina.”

Aaron Moore, who works next door at Salty Dog Cyclery, stopped in to grab a couple grape and apricot Sinalco sodas.

“We’ve been looking for a place that sells cold beverages,” he said. “They’re good and the glass bottles are cool.”

Gulie Khalaf said customers have appreciated the products and pricing, and the store will base its selection on customers’ requests. Most of all, she said, the story strives to provide a positive experience no matter the customer's background.

"We want to support our customers — whether that’s offering advice on the best tahini or sharing recipes," she said. "We want you to get out of the store and be happy with what you’ve bought."

Yazidis find a community in Lincoln

Gulie Khalaf recalls the optimism with which she approached childhood in a Syrian refugee camp.

Lincoln close to getting downtown grocery

After multiple delays, Canopy Street Market is set to open its doors next month as Lincoln’s only downtown grocery store.

$1.7 million contract for work in downtown and Haymarket approved

The P Street beautification project has survived its controversial beginnings.

Buffalo Wild Wings is closing one of its Lincoln locations.

For many of us, school lunches bring back plenty of memories. It was the school cafeteria where we were first introduced to such delicacies as…

Baked goods are displayed at the sampling table at the Lincoln Mediterranean Market on Saturday.

Gulie Khalaf rings up Aaron Moore's purchase at the Lincoln Mediterranean Market. The Khalaf family is among nearly 3,000 Yazidi refugees in the Lincoln, the largest group of Yazidis in the nation.