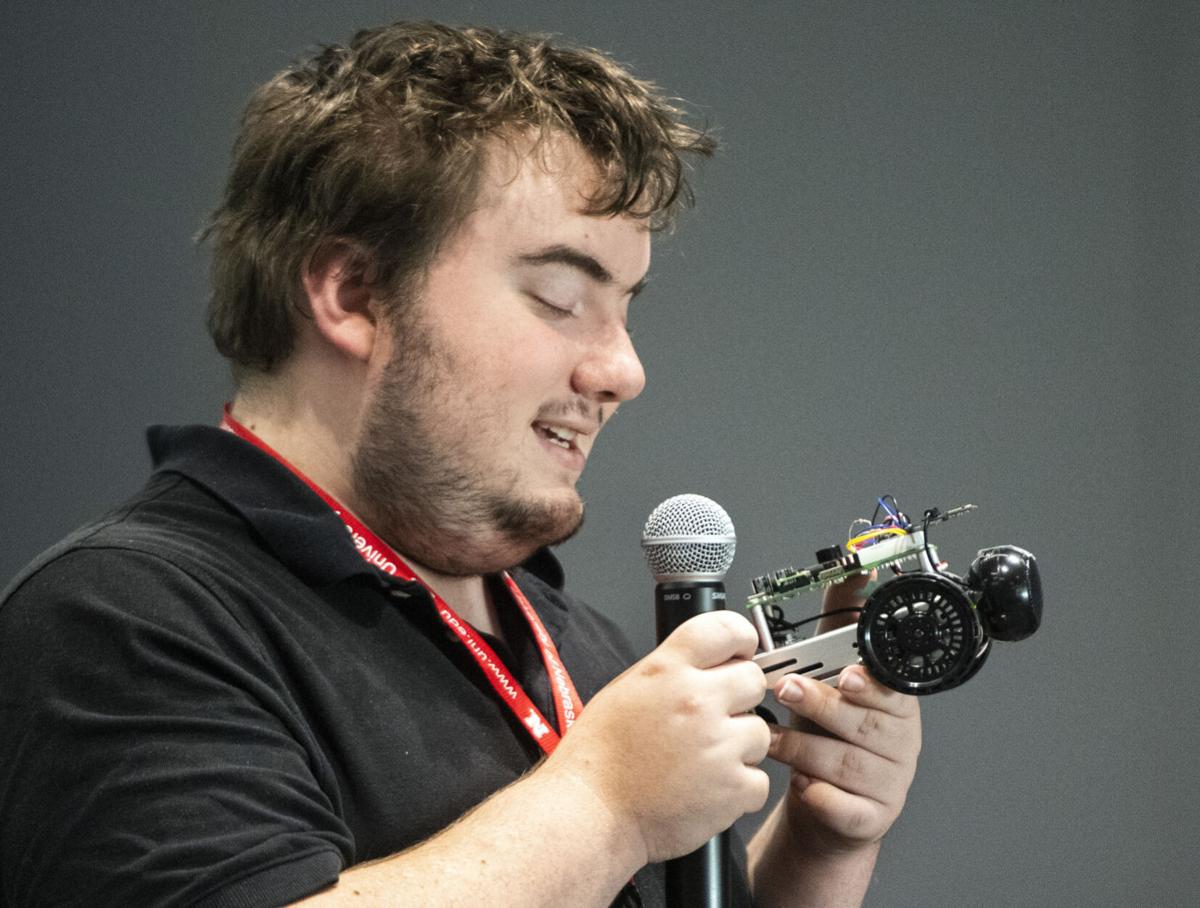 Caleb Root of Lincoln presents his robot at a program organized by the Nebraska Commission for the Blind and Visually Impaired on Friday. 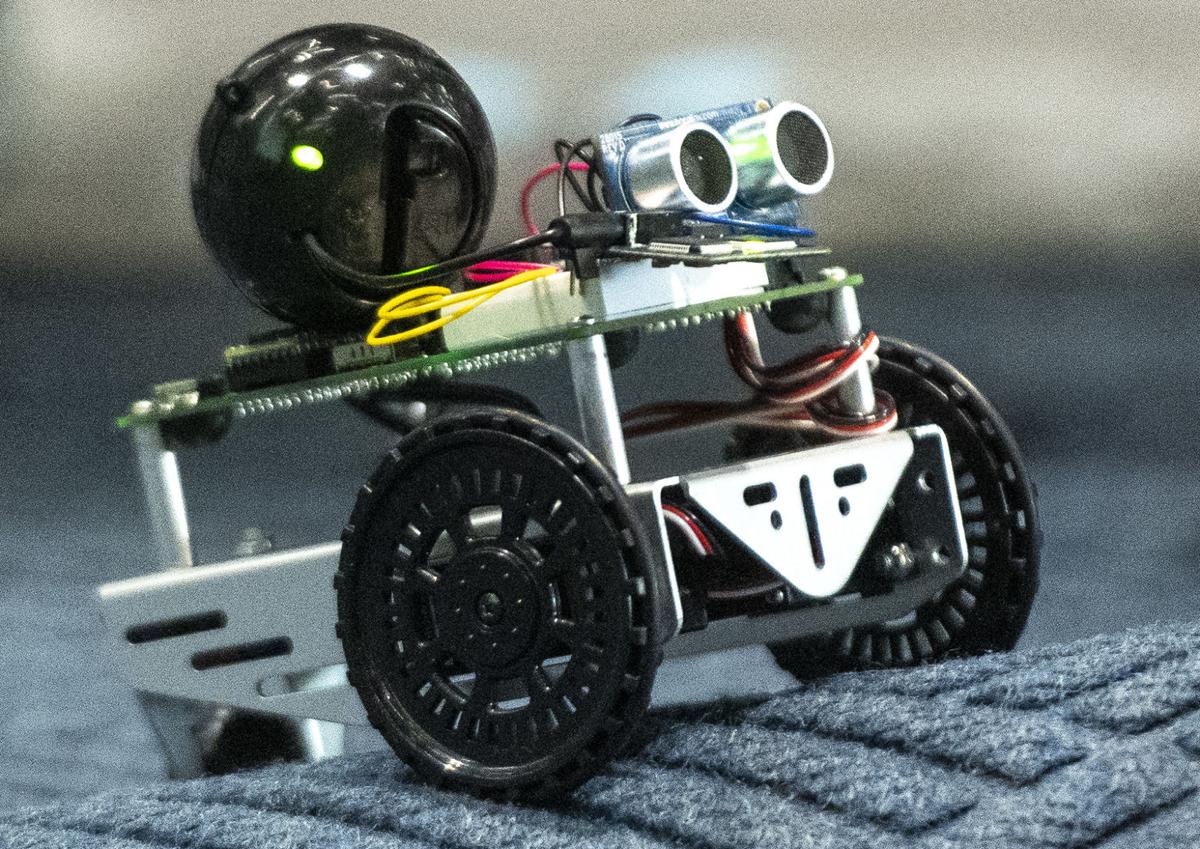 A robot drives over a course during a robotics program for blind and visually impaired youths on Friday. 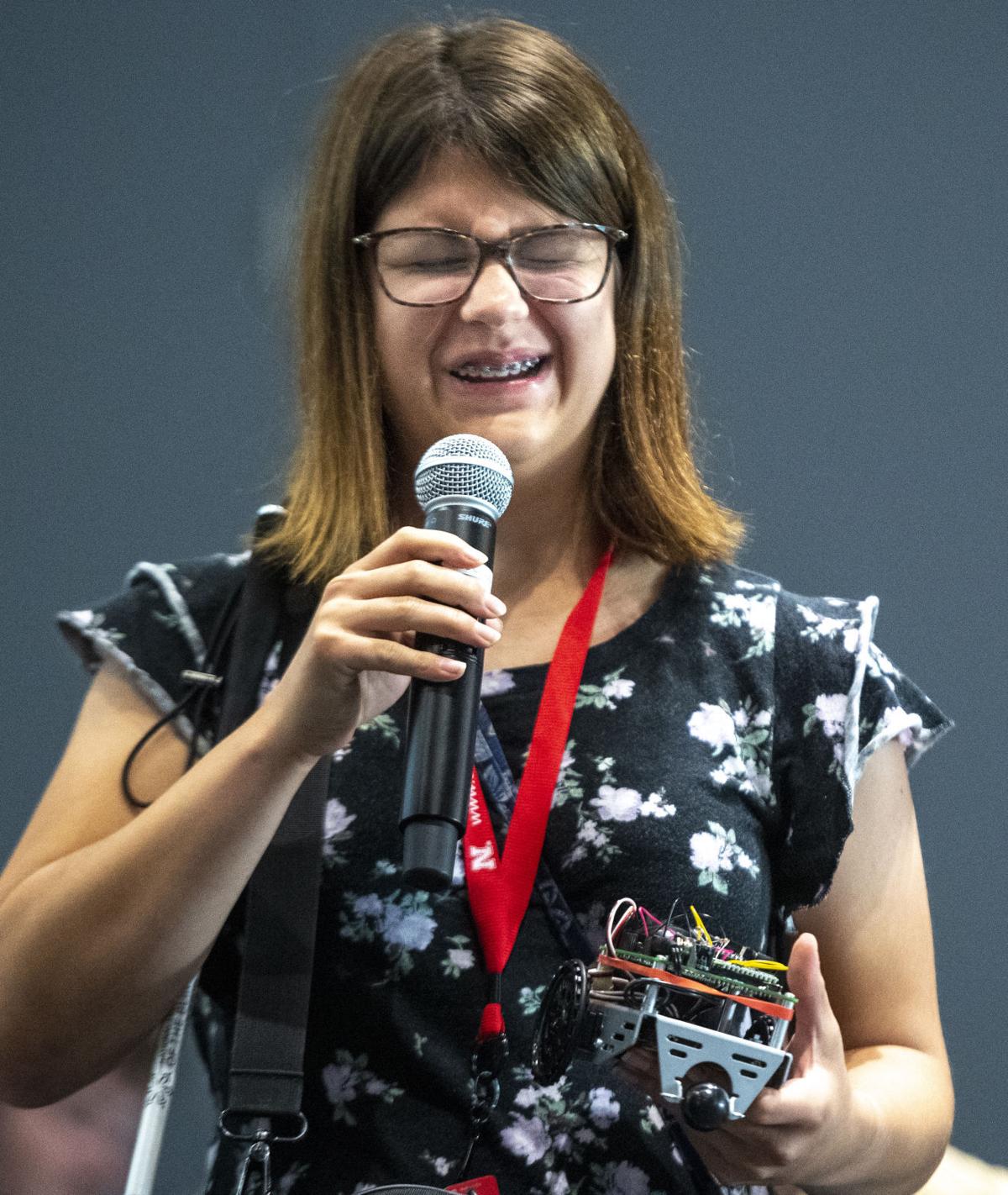 Camille O'Neill, 17, of Gretna presents her robot during a program organized by the Nebraska Commission for the Blind and Visually Impaired on Friday.

The tiny robot whirred and clicked, avoiding obstacles and sensing the changing terrain. Then, in a text-to-speech voice, it piped up with a monologue.

"Someday we will take over the world, but for now I am your personal assistant," said Rob the Rover of himself and his robotic brethren, evoking a rumble of laughter from the audience.

But the laughter quickly gave way to applause as the crowd marveled at the intricately wired and meticulously programed little metallic creature — made even more impressive by the fact that his creator, high schooler Caleb Root, is blind.

As were all of the creators at this week's Nebraska Commission for the Blind and Visually Impaired Robotics STEM Academy. The program, run by science, technology, engineering and math educators who are part of Cyber.org, allowed blind and visually impaired high schoolers in the state to build and program small rovers, complete with speakers, microphones, accelerometers, infrared sensors and more.

The robots were programed to climb inclines, avoid obstacles, speak with text-to-voice software and sing in a succession of beeps to the tune of the Super Mario Bros. theme and the "Imperial March" from "Star Wars."

And while the opportunity to work on this equipment for the week would be exciting for any scientifically inclined high school student, this program is particularly important, said Shane Buresh, Nebraska Commission for the Blind and Visually Impaired transition coordinator, as many blind and visually impaired students don't get to participate fully in STEM classes and other school activities.

That's not only a disservice to the students, he said, but to the scientific community.

"Some brains may be in this room that can solve some major problems in different areas of science," he said.

Chuck Gardner, who directed the weeklong camp, agreed that the students have incredible capabilities.

"These are some of the most complex bots we've seen at a camp like this," he said of the students' creations.

While this is the first year the program has been hosted in Nebraska, Gardner said he has worked in camps like this for years in Virginia.

"Every time it amazes me," he said. "The abilities these kids have to overcome the obstacles that we present."

Aiden Garza, a 17-year-old from Chadron who attended this week's camp, said it was meaningful to him to have the opportunity to build the bot and learn so many skills. He also enjoyed the chance to go rock climbing and bowling at University of Nebraska-Lincoln facilities.

Garza said he hopes to take some of the skills he learned this week and use them in the computer science field. Gardner thinks that's a real possibility for the students who attended the camp.

"I'll put these kids up against any sighted students in the country," he said.

After a recent accident, residents and business owners in the South of Downtown neighborhood came up with a plan for a mural in the middle of 11th Street — a smiley face asking drivers to "slow your roll."

Groups of up to seven can sign up for 9 or 12 a.m. start times for a lighthearted competition in various shooting sports, such as indoor rifle, outdoor archery, tomahawk throwing, slingshots and more.

When Sunken Gardens guru Steve Nosal was working to create this year's design, he watched "The Wizard of Oz" about six times, sucking up color…

The suspect said he ignited an artillery shell and held it outside the vehicle until he heard a noise that he believed was the firework discharging. He then brought the firework inside the car, where it fired through the bottom of the tube.

Half a world away, members of Yazidi community mark Aug. 3 genocide

For most Americans, Aug. 3 was a normal Tuesday, but for Yazidi-American Wisam Saado, it's a reminder of how precious life is.

The fourth-grader has spent the past year and a half learning how to code. “What I like about coding is that you can use your creativity,” he said. “And sometimes you can create apps to help people, also.”

Caleb Root of Lincoln presents his robot at a program organized by the Nebraska Commission for the Blind and Visually Impaired on Friday.

A robot drives over a course during a robotics program for blind and visually impaired youths on Friday.

Camille O'Neill, 17, of Gretna presents her robot during a program organized by the Nebraska Commission for the Blind and Visually Impaired on Friday.