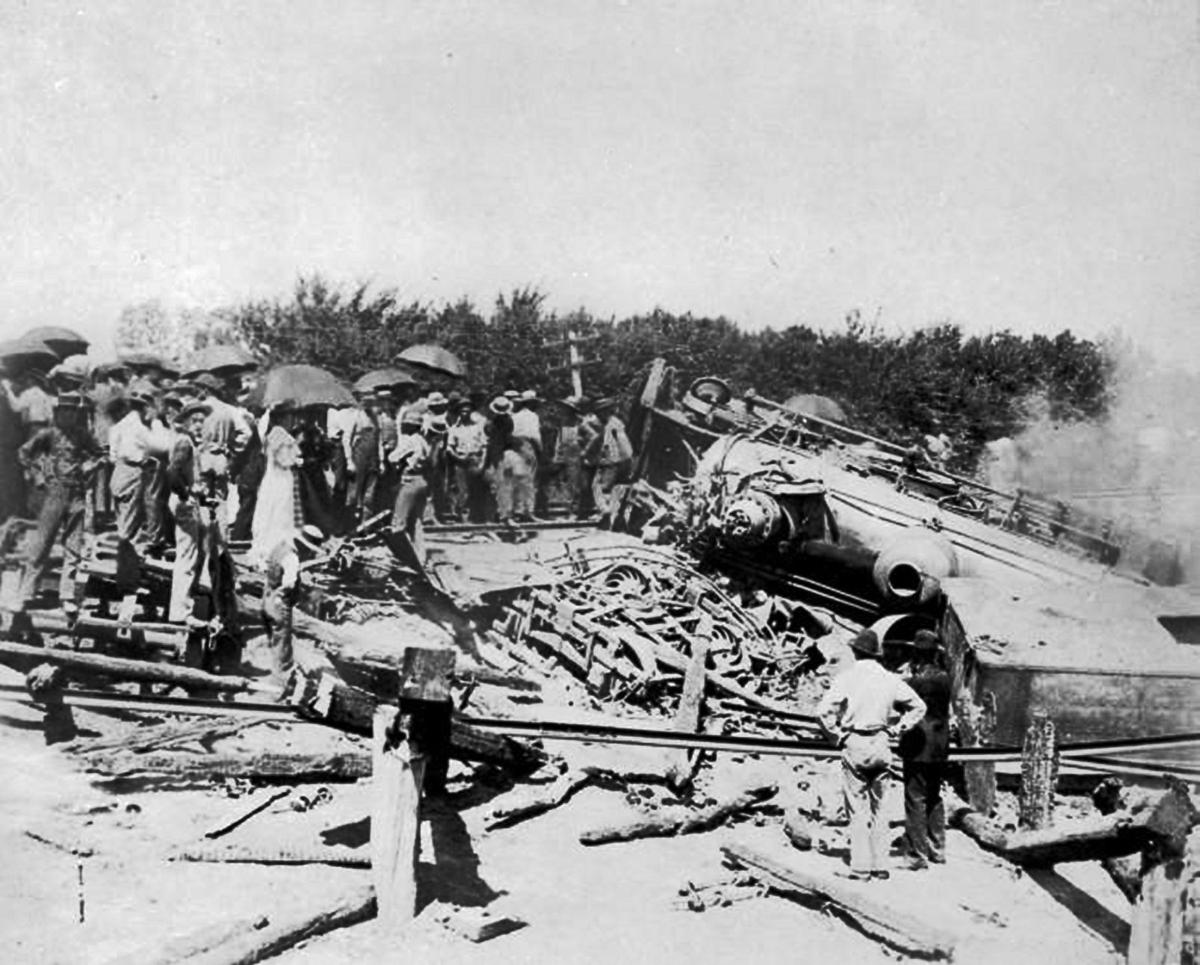 Onlookers gather at the Aug. 9, 1894, crash of a Rock Island passenger train in what is now Wilderness Park. Police detectives determined the track was sabotaged, which led to the deaths of 11 train passengers and crew. 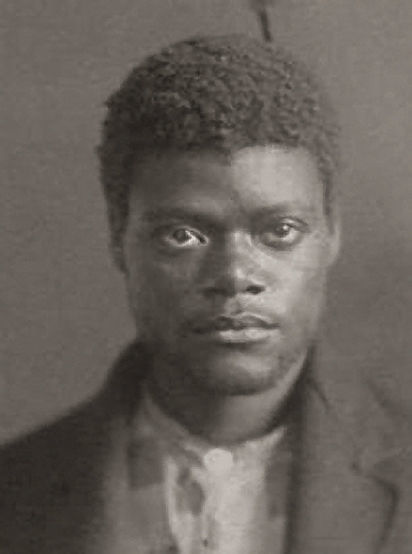 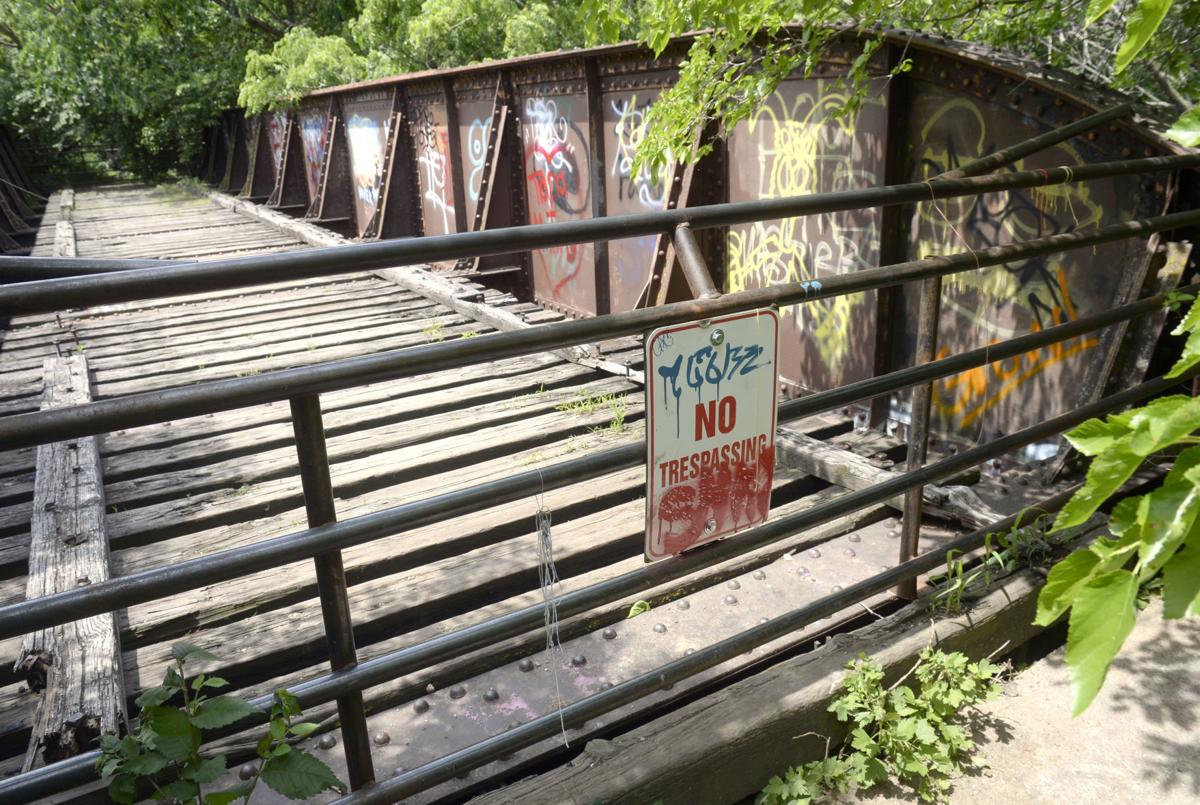 The planned pedestrian bridge over the Burlington Northern-Santa Fe tracks would connect with what's known as Train Wreck Bridge, to help hikers and bikers move between the Rock Island and Jamaica North trails.

It was early August in a younger Nebraska and the train was carrying 33 souls across a sea of corn, on its regular run to the Rock Island station at 20th and O streets.

They had left Fairbury a little late and the engineer was trying to reclaim the lost time, pushing the locomotive past 50 mph.

But once it hit the 400-foot-long bridge over Salt Creek and tracks run by other railroads, they would be close to Lincoln, the electric lights just miles away.

Moments later, it rolled off.

The coal-fired engine hit the ground 40 feet below after the rails seem to spread and its wheels met the ties. The coal tender went next, piling on top of it. Then the smoker and lounge. And then the coach car.

The ruptured engine unleashed a shower of glowing coals, igniting the other cars and the wooden bridge beams now above them.

“It was an awful sight,” the State Journal reported the next day. “The flames mounted high in the heavens coloring the entire southern sky a brilliant carmine while the moonbeams fell upon the glowing mass below from which mortal shrieks of agony and pain were heard to issue.”

But the crash that killed 11 people — eight passengers and three crew members — was also a crime, a deliberate derailment.

A farmer’s son had heard the impact and ran through a field to help, tripping over a crowbar and a stack of steel plates that secured rails to the ties. Later, investigators found discarded spikes and further signs of sabotage on the far edge of the trestle — fresh wrench wounds on steel, wood dented from recent prying.

“The Holocaust Caused by Fiends,” the newspaper proclaimed. “A Crow Bar Found Nearby and Tell-Tale Marks on the Rails.”

In the days and months that followed, there would be stories of suffering and heroism, and even some measure of justice. But then the decades would pile up like the falling train cars, and Nebraska’s deadliest mass killing would largely be forgotten — until Joel Williamsen opened an old newspaper at the Library of Congress more than a century later.

The Burt County native was just looking for a good story.

He’s worked with NASA and the Pentagon. He has more than a half-dozen patents to his name. He developed shields to protect the International Space Station and the Deep Impact spacecraft from space debris. For the past 15 years, he’s studied hyper-velocity ballistic impacts at the Institute for Defense Analyses.

He also had a book in him, a coming-of-age novel set in Nebraska at the turn of the century. But he wanted to wrap it around something newsworthy at the time.

“I was looking for true events in Lincoln,” he said. “I needed this as a historical hook to hang the story on.”

He spent six months at the Library of Congress, leafing through old newspapers. And then he found the headline he was looking for: “Death by Fire: Eleven Lives Go Out in a Rock Island Railroad Wreck.”

And he was captivated. He read about Harry Foote, a brakeman with a broken leg who crawled into the burning cars again and again to rescue passengers and crew after two other survivors headed north, searching for a way to summon help and eventually finding it two miles away at the penitentiary.

“None of them would have survived if Harry hadn’t taken the initiative,” Williamsen said. “There were some real heroes on this, and you rarely find those real heroes.”

He read about the suspect, George Washington Davis, who witnesses said was on the scene immediately, waving a lantern — though police said he told them he’d run the four miles from Lincoln’s “colored club” after hearing about the crash.

The first jury couldn’t reach a verdict. Prosecutors had little evidence and no motive. A few months later, with the judge’s permission, another jury convicted Davis of second-degree murder. But in 1905, the governor commuted the sentence, citing grave doubts about the case, and Davis went to work for a farmer in Beemer known for hiring ex-cons.

Williamsen had lived in Lincoln during college and had never heard this story before. But now he had the facts he needed to support the weight of his fiction.

He published “Barrelhouse Boys: A Tale of Mirth, Romance and Murder” a decade ago. A year after that, and with the blessing of the state and city, he paid $1,200 to have a historical marker placed where the train cars fell.

But that wasn’t enough. He’s since tried to find out what happened to Foote, and learned the brakeman might have died shortly after the wreck. He cold-called strangers in Beemer and scouted the cemetery, trying to find out what became of George Washington Davis.

“I was fascinated by the fact this has such little interest,” he said. “I can’t get away from it.”

He’s composing a musical based on the crash. And he’s headed to Lincoln this week to mark its 125th anniversary.

He is scheduled to give a presentation Aug. 13 as part of the Preservation Association of Lincoln’s Brown Bag Lecture Series.

But a few days before that, after the sun goes down, he’ll host a candlelight vigil at the crash site. Anyone’s welcome, he said, to honor Foote’s heroism and pay respects to the 11 dead. He’ll show up a little before 9 p.m., hand out some battery-powered candles — real ones are prohibited because of fire danger — and say a few words.

It should be a solemn, somber event. Maybe even spooky.

He’s been told the area is haunted, maybe by George Washington Davis. “People who go there in the evening have reported to me they had a really eerie experience there. They saw a man with a lantern, swinging it up and down.”

The site is still on the edge of Lincoln, but barely. The marker is on the popular Jamaica North Trail just south of Old Cheney Road, with Wilderness Park on one side and Densmore Park and the Cooper YMCA on the other.

And it’s about to get more accessible. The city is planning a 350-foot bridge spanning the same gap as the trestle that burned. The $2.2 million project would connect the Rock Island Trail with the Jamaica North Trail.

Fundraisers have said a donor who gives $1 million or more would get naming rights to the bridge, but Williamsen has his own proposal.

Why not name it after the brakeman who climbed back into the burning cars, risking his life to save others?

It would be an honorable name, he said. Clever, too.

He’d call it the Foote Bridge.

Author Joel Williamsen will be in town for a pair of events to mark the 125th anniversary of the Rock Island train wreck on the southwest edge of Lincoln. The crash killed 11 people and was deemed to be intentional.

* Friday: Vigil at crash site. Williamsen will be there at about 8:30 p.m. to answer questions. Moment of silence at 9:20 p.m., the time of the crash. Bring a flashlight. Marker is more than a half-mile south of Old Cheney Road on Jamaica North Trail; closest parking is Wilderness Park’s Old Cheney Road trail head.

Fire in the sky: 50 years ago, a jetliner carrying 42 people fell out of a stormy sky near Falls City

FALLS CITY -- The night the sky exploded and scarred her family's farmland, Judy Schawang was in the back seat, eyes closed.

Death of a Salesman

In December 1937, a Lincoln car salesman told his wife he’d be home from a trip to Seward in time for dinner. She waited the rest of her life.

The for sale sign went up last week, answering the question ice cream lovers have been asking since May.

He's on a mission to visit every Nebraska town, and he means it

Cody Sperl is used to the suspicious looks.

Onlookers gather at the Aug. 9, 1894, crash of a Rock Island passenger train in what is now Wilderness Park. Police detectives determined the track was sabotaged, which led to the deaths of 11 train passengers and crew. 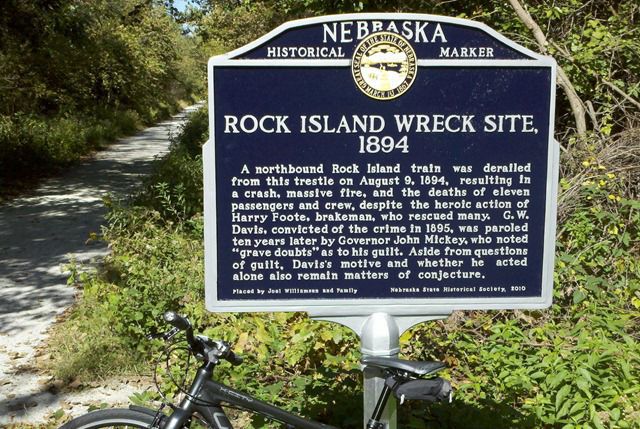 A marker for the Rock Island wreck site is along the Jamaica North Trail.

The planned pedestrian bridge over the Burlington Northern-Santa Fe tracks would connect with what's known as Train Wreck Bridge, to help hikers and bikers move between the Rock Island and Jamaica North trails. 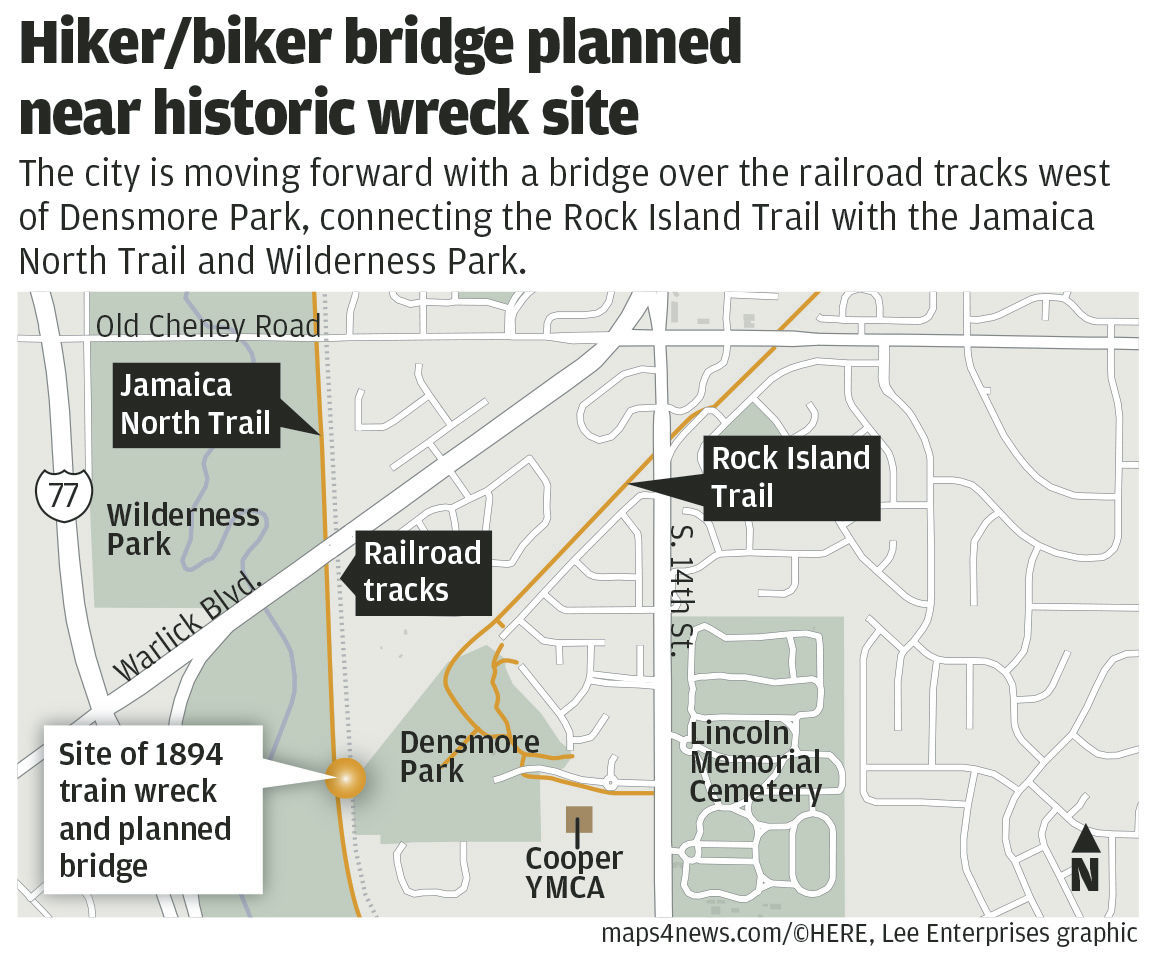 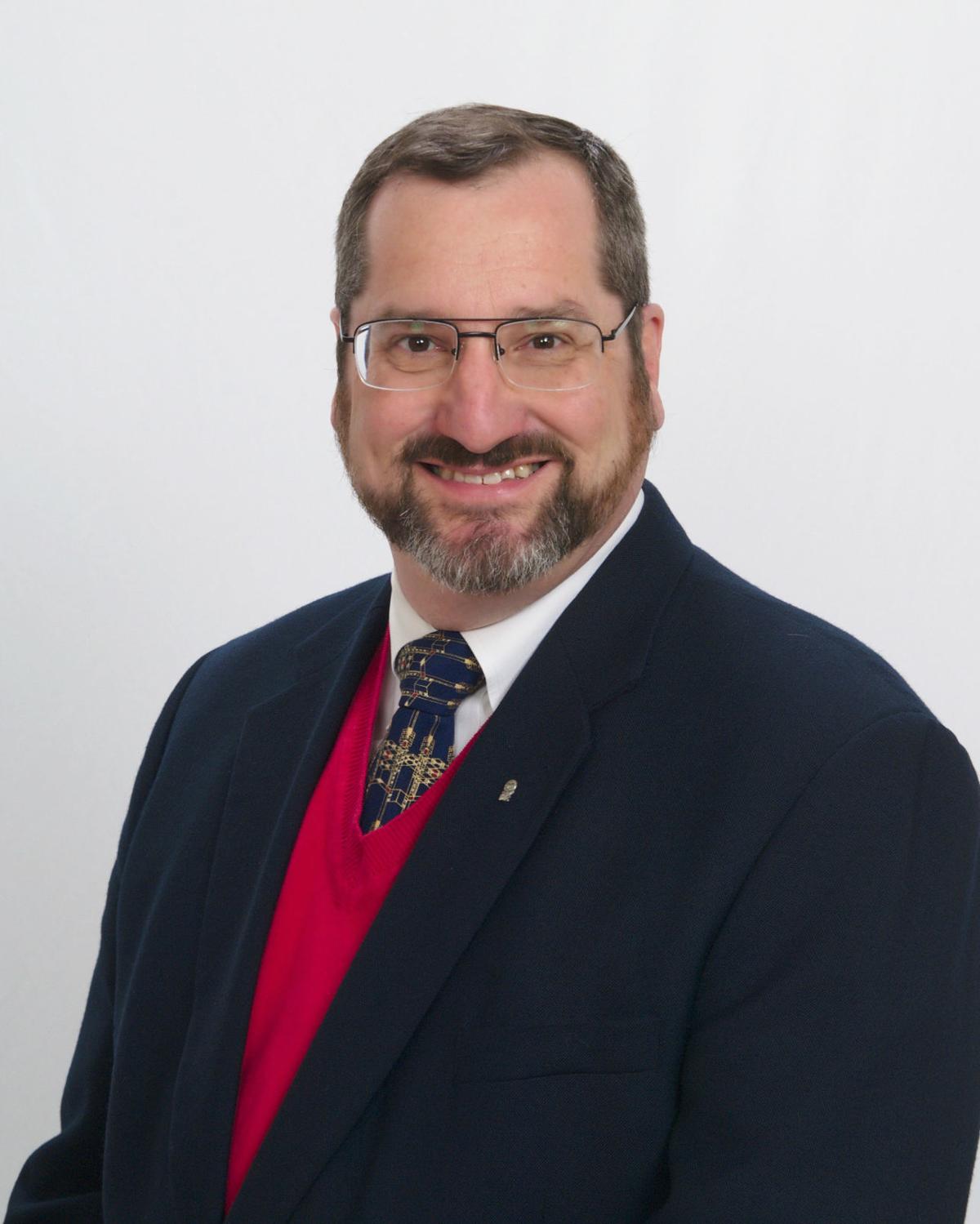 Author Joel Williamsen will be in Lincoln next week to mark the 125th anniversary of the wreck of a Rock Island train southwest of Lincoln that killed 11 people.