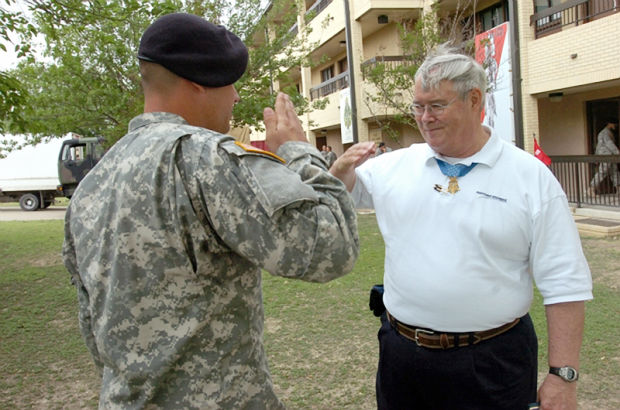 Medal of Honor recipient Charles Hagemeister salutes Spc. Jeremy Varnell, a medic from his former unit, in this 2008 photo. 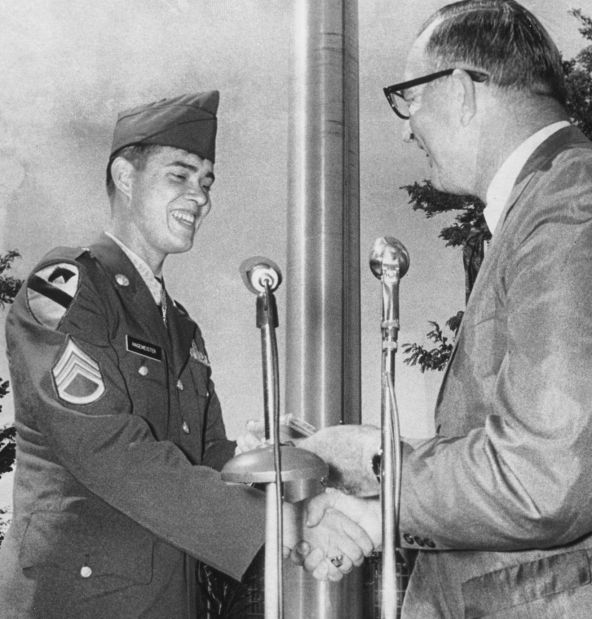 Medal of Honor winner Charles Hagemeister receives the key to the city from Lincoln Mayor Sam Schwartzkopf in June 1968. 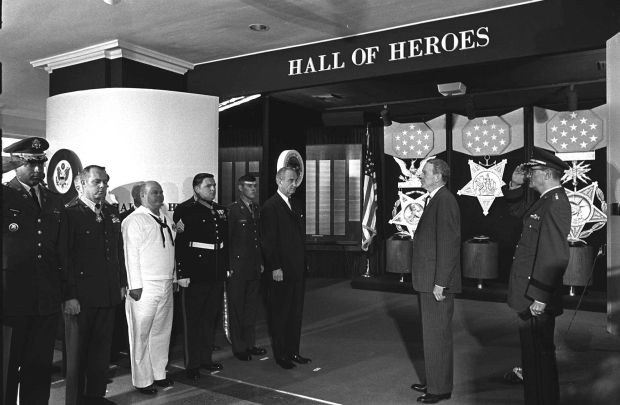 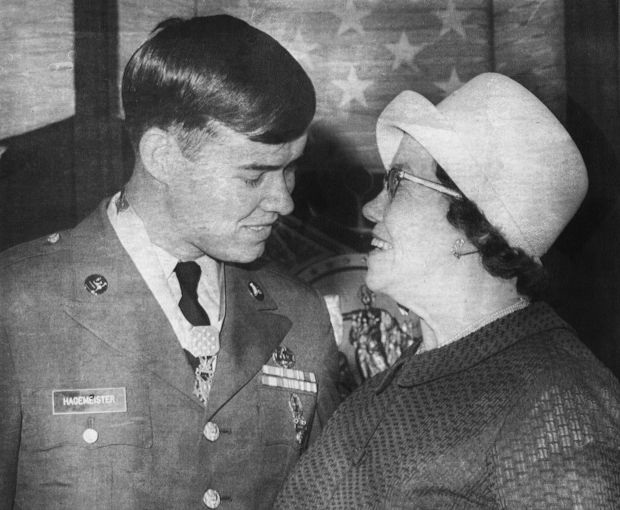 Lincoln native Charles Hagemeister visits with his mother, Alvina, after being decorated with the Medal of Honor by President Lyndon Johnson in May 1968.

Suddenly, the mortars were falling and the guns were firing and the 23 U.S. soldiers were caught in a three-sided ambush by an enemy that outnumbered them by nearly tenfold.

He had grown up in Lincoln’s quiet College View neighborhood. Now here he was, three months in Vietnam. He’d seen fighting, but nothing like this.

Some of these men he’d lived with 24 hours a day. Others found themselves fighting for their lives on just their second afternoon there.

His platoon leader took a bullet to the head.

Hagemeister thought about what he needed to do. But he didn’t think about it, too.

“Your reaction to stuff like that, you do what you’re trained to do.”

The medic saved American lives that day. And he picked up a rifle and took the enemy’s.

But it was what happened after he got home that changed his life. The next year, the president shook his hand and draped the Medal of Honor around his neck. A four-star general encouraged him to re-enlist. Lincoln’s mayor gave him the key to the city.

Every year since, the Lincoln Southeast grad has told his story hundreds of times. To soldiers and students and strangers, who see his special license plates and want to know why.

And to his hometown. The 67-year-old will be here Monday -- Veterans Day -- to help unveil a plaque at the Capitol honoring the 72 Nebraskans awarded the nation’s highest military honor.

He is one of the state’s two living recipients.

It started as a rescue mission.

Late in the day on March 20, 1967, another Army company was fighting in Binh Dinh Province and had lost its officers. Hagemeister’s platoon was ordered in as backup. They piled out of their helicopters and started to walk to a village where the other company was dug in.

It became an ambush.

“We took a lot of fire. In the first volley of the ambush, my platoon leader was wounded. Three other people were wounded. And that was just in the first five minutes.”

He has told this story so many times he’s not entirely clear how much he remembers or how much he’s memorized.

But he took action. He took charge. He crawled through the gunfire to help the wounded. He became a target, too, his backpack taking three rounds.

He was at his platoon leader’s side, trying to give the man morphine, when the syrette was shot out of his hand.

He kept moving, ordering new recruits to protect the wounded so he could find others who needed help. “When you see your buddies in trouble, you don’t pause to weigh the consequences,” he said two years later. “You just wade right in.”

In the dark, they came under sniper fire. Hagemeister aimed for the flash and took the man out of a tree. He killed three more North Vietnamese moving toward him, their advances illuminated against the burning village. He silenced an enemy machine-gunner.

From his official citation: “Unable to remove the wounded to a less exposed location and aware of the enemy's efforts to isolate his unit, he dashed through the fusillade of fire to secure help from a nearby platoon. Returning with help, he placed men in positions to cover his advance as he moved to evacuate the wounded.”

From Hagemeister: “I was just doing my job.”

This is what he learned later: The enemy numbered between 160 and 200; their losses were estimated between 60 and 80.

Hagemeister was credited with seven kills.

His platoon lost two men -- including its leader, who never recovered from his head wound -- and counted 11 wounded.

“We went back into the area the next morning and picked up our gear and recovered one of our dead, and all of the enemy were gone.”

He grew up in a house that had been moved into south Lincoln from the country. He  attended College View Elementary. He had graduated from Lincoln Southeast just a few years earlier, spent a year at the university.

And now here he was in Washington, face-to-face with President Lyndon Johnson.

It was 14 months after the battle, May 14, 1968. He had been stationed at a military hospital in Virginia. Four days earlier, he learned he was to be awarded the Medal of Honor.

He was surprised; he knew he’d been nominated while still in Vietnam, but then he heard nothing.

His mom came to the ceremony. The president asked: “How long do you have left in the military, son?”

“I had a four-star general give me a re-enlistment talk.”

Then he started learning what it meant to wear the Medal of Honor.

“You find out very quickly. The members of the society, they go through and they make sure you understand how this is going to change your life. You don’t get to give it back, and you get to wear it for the rest of your life.”

It came with tangible benefits, like the higher pension, the free military transportation for life, the option for his children to attend a military academy, the invitations to attend every presidential inauguration.

And lifetime responsibilities, like telling his story -- formally and informally -- hundreds of times a year. Attending conventions, where the nation’s 79 living recipients (former Sen. Bob Kerrey is Nebraska's other living winner) gather. Working with teachers nationwide to instill the medal’s values on young people.

“We take the Medal of Honor stories and try to develop loyalty and courage and patriotism and the like.”

More than four decades ago, he told a reporter wearing the medal was harder than earning it. He still believes that.

“When you do the action and get put in for the Medal of Honor, you’re doing what is your job. After you get it, all the demands you get -- the opportunities to speak, and all the things you get asked to do. It's probably harder than getting put in for.”

Today, Hagemeister lives in Leavenworth, Kan. That day in Washington 45 years ago, he took the general’s advice: He re-enlisted. He became an officer. He retired as a lieutenant colonel in 1990.

He contracts with the military now. In battlefield simulations -- on a computer -- he orchestrates the role of the enemy: North Koreans, Iraqis, Afghans.

But he makes sure to bring his medal, so the recruits know where he came from.

And what he went through that night in 1967.

“It shows that someone who’s been there and done that is coordinating their training. It gives me great credibility.”

The guest of honor didn't address the crowd gathered before him in the Capitol Rotunda.

JoAnne Young: Veteran stories live timelessly on in his writings

Jess Hartsell took to the skies as a B-26 tail gunner — service to his country that would define his life and much of his daughter’s.

A list of events in Lincoln and nearby towns for Veterans Day and the following Tuesday.

In observance of Veterans Day, the following places will be closed Monday:

Those who knew Rex Fuller trusted him to do right, like the time he piloted a B-24 Liberator into heavy flak above the Ploesti oilfields of Ro…

Medal of Honor recipient Charles Hagemeister salutes Spc. Jeremy Varnell, a medic from his former unit, in this 2008 photo.

Medal of Honor winner Charles Hagemeister receives the key to the city from Lincoln Mayor Sam Schwartzkopf in June 1968.

Lincoln native Charles Hagemeister visits with his mother, Alvina, after being decorated with the Medal of Honor by President Lyndon Johnson in May 1968.