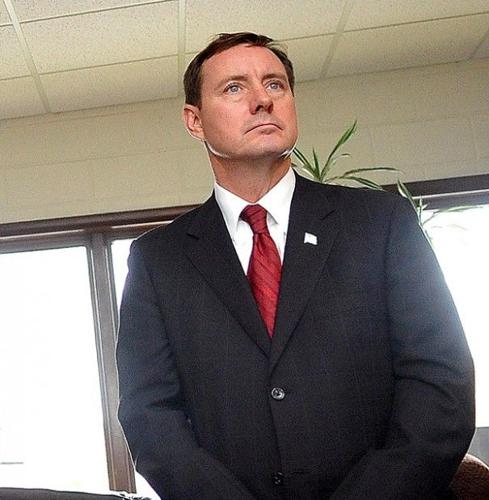 Rick Sheehy, Nebraska's former lieutenant governor, was considered a front-runner for the Republican gubernatorial nomination until the Republican resigned amid a scandal over phone calls to women who weren't his wife. 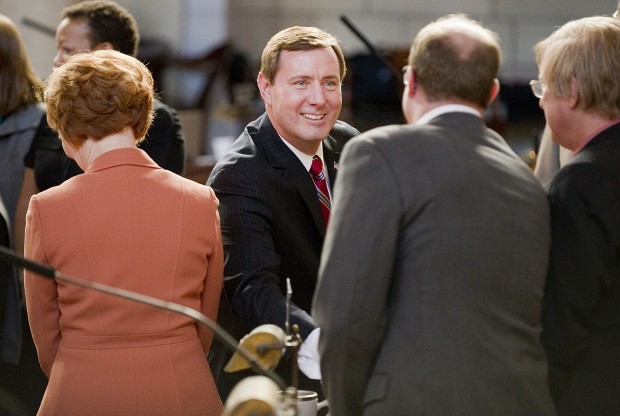 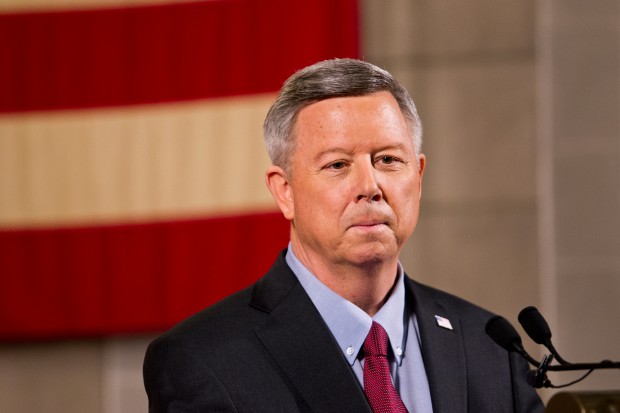 Nebraska's lieutenant governor resigned Saturday after calls on his state cellphone to women other than his wife became public.

"We take our public trust very seriously," he said. "I had trusted him, and that trust was broken."

The governor's office, responding to public records requests from the media, released cellphone information showing the lieutenant governor had made scores of phone calls, including many late at night, to various women during the past four years.

One woman, Dr. Theresa Hatcher of Bellevue, told the Journal Star: "After meeting the lieutenant governor at political events, I eventually grew to have a personal relationship with him. I regret now that many of my understandings and impressions of his marital status were later found to be inaccurate."

She said she met Sheehy in 2008 and the relationship started soon after.

"He led me to believe we had a future," Hatcher said.

Hatcher, 53, who has served on numerous occasions as the "doctor of the day" for the Legislature, said she had nothing but the utmost respect for Sheehy and his wife, Connie, and wished them both "nothing but the best, both personally and professionally."

She said the relationship with Sheehy spanned several years and ended when she saw news of his divorce in the newspaper.

Hatcher said she had confronted him about other women, but he denied it. He never denied being married, but he told her his relationship with his wife was "done," she said.

Connie Sheehy filed for divorce in July, saying the marriage was "irretrievably broken." They were married in 1983 and have two grown children.

The governor said he had become aware of new information late Friday regarding Sheehy's personal decisions. He called a news conference for Saturday morning to announce the resignation.

A formal request for Sheehy's state cellphone and land line records first came in mid-December from the Omaha World-Herald.

A request also was made for email correspondence between Sheehy and Hatcher and Sheehy and Michele Ehresman, a former director of the Holdrege Area Chamber of Commerce.

The records show, for example, Sheehy made or received 73 calls to and from a Holdrege area cellphone, some late in the evening, on 10 days in January 2012.

Attempts to reach Ehresman on Saturday were unsuccessful.

Heineman would not say whether he asked Sheehy to resign, just that he "had a private conversation with him," and he would keep it private.

Public officials are rightly held to a higher standard, he said.

"I've got a knot in my stomach," Heineman said about his feelings on the incidents leading up to the resignation. "I'm deeply disappointed. He's done a lot of good things for the state."

Rumors about the lieutenant governor's relationships have been circulating at the Capitol for months.

Heineman said he would begin the process Monday of finding an "appropriate lieutenant governor" to fill out the remaining two years of the term.

He said he would have conversations with people he knows and his staff to determine who might be available and interested.

"This is unexpected. It's very serious. We need a lieutenant governor, so I'll move as quickly as I can. But I also want to make sure I find a good person," Heineman said.

There are other issues taking his attention right now, including state tax reform, he said.

Until a successor is chosen, the next in line if the governor would be out of commission for some reason would be Speaker of the Legislature Greg Adams.

"We've always worked closely with the speaker of the Legislature. But we'll do so even more so during the next couple of weeks," he said.

As lieutenant governor, Sheehy also presided over the Legislature.

Heineman said he doubted Sheehy would continue with his campaign for governor, but if he did Heineman no longer would support him in that effort.

Heineman had said in July that Sheehy had his full support in a run for the office and that he had been an outstanding lieutenant governor.

Sheehy, 53, a former mayor of Hastings, was chosen by Heineman in 2005  as second in command.

Sheehy has a professional background as a paramedic and managed a private ambulance service. As lieutenant governor, he has been the governor's point person on homeland security issues.

In his two-sentence resignation letter, Sheehy said, "It has been a privilege to serve you and the great people of our state as lieutenant governor."

His state cellphone number has been disconnected and he could not be reached for comment.

Heineman has an opportunity now to try to select his successor.

Heineman doesn't want appointee to be candidate for governor

Gov. Dave Heineman said Monday he's looking for a lieutenant governor who will make a commitment to not run for governor in 2014.

The abrupt resignation of Republican Lt. Gov. Rick Sheehy on Saturday threw open the 2014 governor's race, which now finds the GOP and the Dem…

Who should run for governor? Tell us

Visit our Facebook page to tell us who you'd like to see in the 2014 Nebraska race for governor.

New spacecraft concept would be accelerated with high speed micro-bullets

New spacecraft concept would be accelerated with high speed micro-bullets

Rick Sheehy, Nebraska's former lieutenant governor, was considered a front-runner for the Republican gubernatorial nomination until the Republican resigned amid a scandal over phone calls to women who weren't his wife.