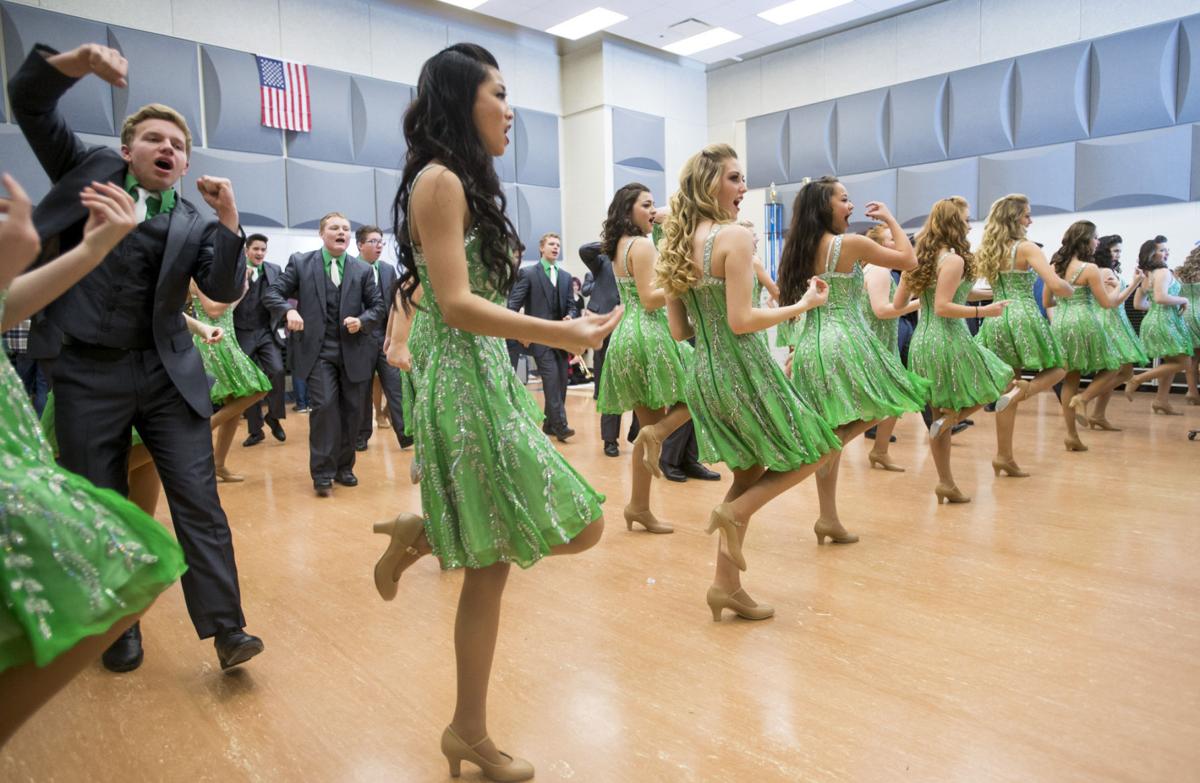 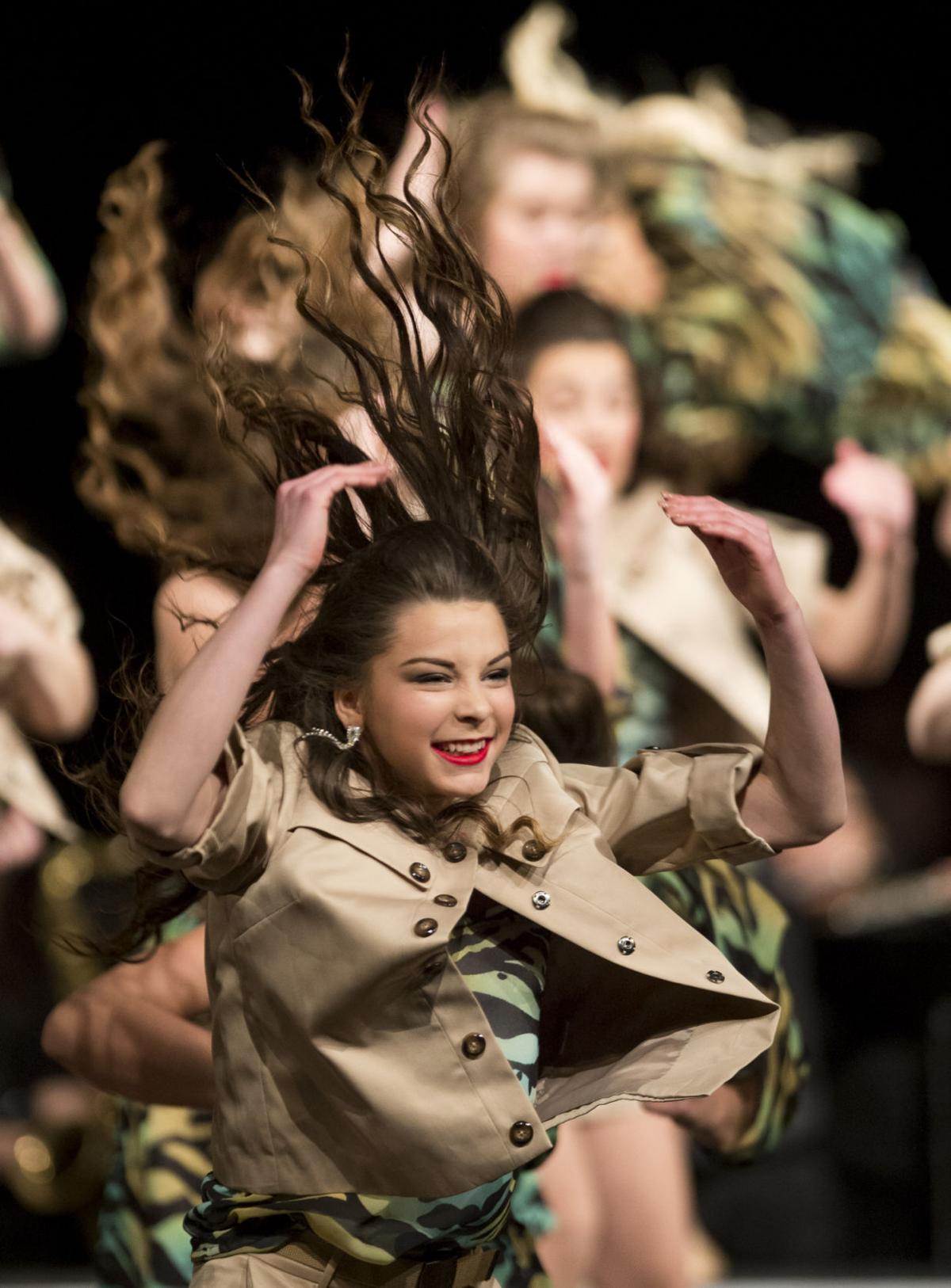 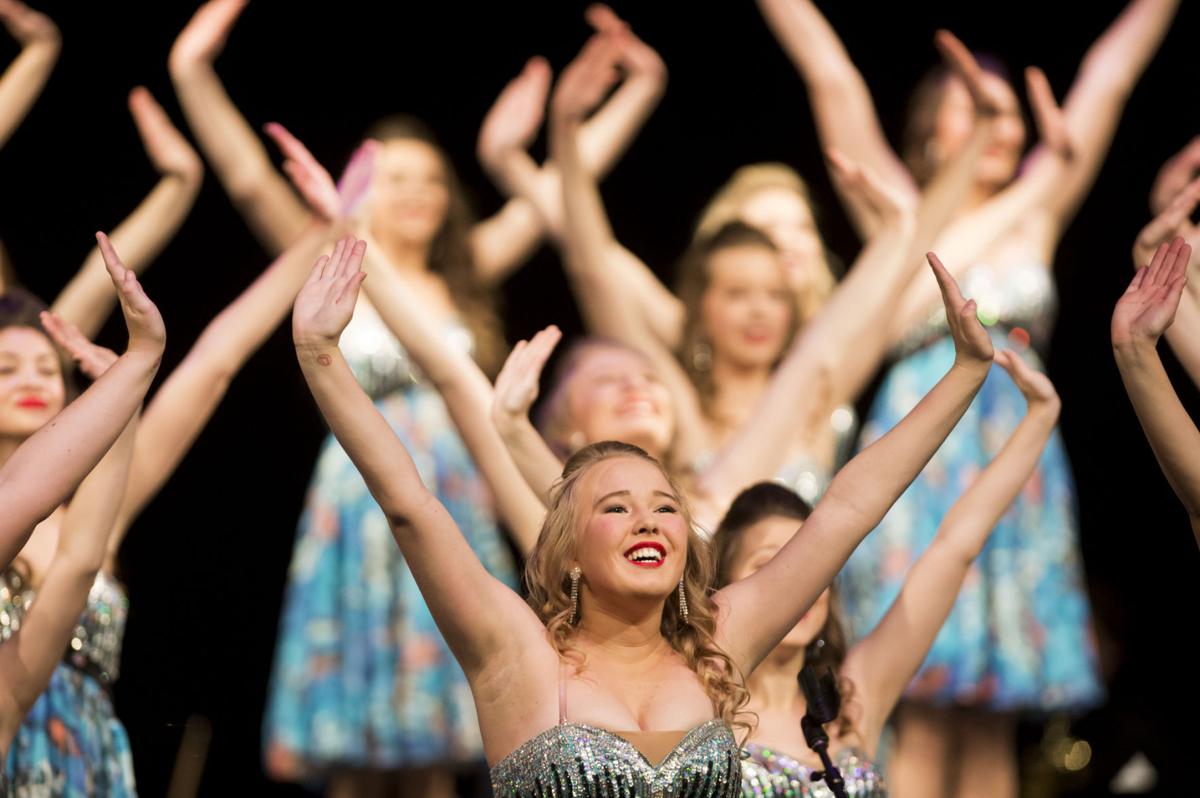 Lincoln East's Maddy Lorenze gives a big finish with others during the 10th Annual Southwest Showdown.

The scene Saturday at Lincoln Southwest High School was straight out of “Glee.”

Girls walked around with tightly curled hair and bright red lips. Boys shuffled past in their nicest suits. They were part of hundreds of local show choir students gathered at the school to compete in the tenth annual Southwest Showdown fundraiser.

Eleven groups from five schools -- Lincoln Northeast, Lincoln East, Norris, Millard West and Harrisonville High School of Missouri -- came to compete. Two groups from host Lincoln Southwest performed but didn't compete. This year was one of the smallest contests Southwest has seen in years according to Southwest show choir director Andrew Jacobson, in terms of both the number of schools competing and the number of teams.

Elkhorn High School of Omaha scheduled a similar competition at their facilities Saturday and hosted 17 groups from around the Midwest, contributing to the low turnout at Southwest, Jacobson said.

Jacobson said this competition is only for fundraising purposes, and that winning won’t further advance teams into another event. By the end of the day, he’s hoping for around $15,000 in proceeds.

“All the high school competitions are just come for the day, come for your placement and that’s it,” he said. “You just come and compete for bragging rights.”

Jacobson said that many of the expenses in high school show choir -- from dry cleaning for costumes to folders to cubbies to sheet music -- can pile on for the students and their families.

“It all really adds up, but we try to make it feasible,” he said.

Throughout the day, Jacobson not only gets to coach his own team, but as the host, he gets to interact with and get to know people from other schools.

“My favorite part, what I love as a director, is interacting with the other students,” Jacobson said. “I love the other opportunity when I get to work with other students. You get to see them smile and it reminds you of what we do.”

Norris High School show choir member Holly Skorupa found herself mesmerized by the way the stands were set up in the gym. All the bleachers were extended, and audiences could watch from all sides.

“I think we had a really good experience just performing in that school auditorium,” Skorupa said. “It was really big and I liked how the seats were all around us, I think it really projected our voices.”

Lincoln Southwest team member Maddie Fanton said that she usually sees a pattern when it comes to the atmosphere at these types of competitions.

“At every high school competition it’s always going to be high stakes because you want to get the championship, but the show choir community is also just so supportive,” Fanton said. “We all love each other and have this kind of embracing and accepting family.”

In the end, that’s what Jacobson was hoping for. Rather than fundraising, Jacobson’s biggest goal was to create an enjoyable experience for all students to participate in.

“When we found out how small the event was, people kept asking ‘should we even have it?’" Jacobson said. "My first response was we have to have it because those kids are counting on it.

"It’s not about the funds, it’s about the kids. I would rather have the event because these kids depend on it. They love to do this. Even as stressed as I was, I knew we were doing the right thing.”

Show choirs from around the region face off in the 10th Annual Southwest Showdown at Lincoln Southwest High School. Take a look at photos from…

In February 2006, the Zoo Bar’s Pete Watters booked 23 local bands and solo artists into his club over the course of a week and called it Linc…

Lincoln East's Maddy Lorenze gives a big finish with others during the 10th Annual Southwest Showdown.