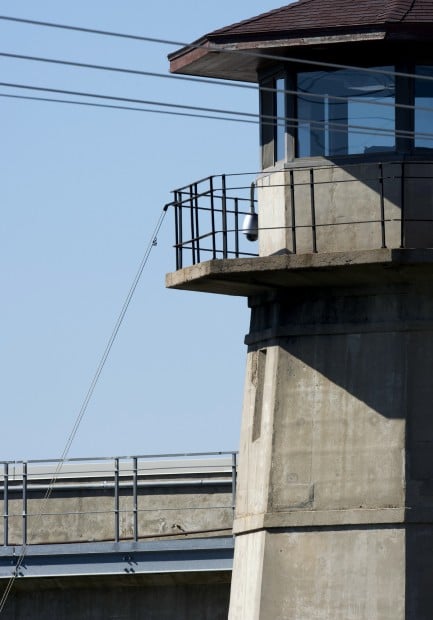 A cable and pulley system rises operates out of one of nine perimeter guard towers at the Nebraska State Penitentiary. 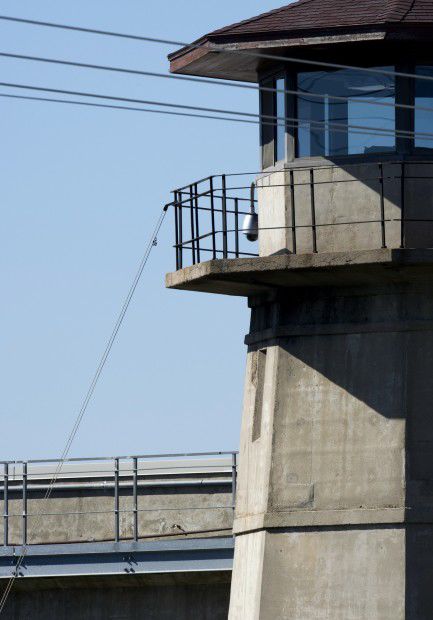 In this modern era of high-tech gadgetry and security, the Nebraska State Penitentiary still uses some tried-and-true, low-tech approaches to keeping inmates secure behind its walls and fences.

One case in point: the humble cable and pulley.

Alert observers driving by the state prison at 14th Street and Nebraska 2 might notice a taut cable running from the upper railing of each of the prison's nine perimeter towers to near the ground.

Officers in the towers, each of which is surrounded by a fence with a locked gate, have guns, and prison authorities don’t want them walking around the grounds with keys to the gates, Nebraska Department of Correctional Services Spokeswoman Dawn-Renee Smith said.

Being on the prison yard with such a key could make them targets for inmates inclined to escape, or simply cause chaos.

So, the keys are kept in the towers and when someone wants up, keys are lowered to them via the cable and pulleys.

“It is a system that certainly has been in place for a long time, and it works. So it continues to be used,” Smith said.

The cables also have been known to carry the occasional lunch or beverage to the top of the towers, she said.

The motorcycle was heading west on Pine Lake Road when it collided with an SUV that was trying to turn onto 38th Street. The motorcyclist, who hadn't been identified as of Sunday evening, was pronounced dead at the scene.

Man accused of firing shots on Sheridan Boulevard in Lincoln

Witnesses told police they heard gunshots and saw a man yelling and walking east on Sheridan at 27th. Officers found the man, asked him to put his hands up, but he refused and kept walking, a hand in his pocket, Officer Erin Spilker said.

The pandemic prompted the city to temporarily change its prohibition of campsites in city parks and along trail corridors.

'Little Josh' dubbed winner of the Battle of the Joshes; community also benefits from event

With one final swing of his red pool noodle, Josh Vinson Jr. — nicknamed “Little Josh” by the crowd — won the inaugural Battle of the Joshes on Saturday.

Tour participants will be able to stop by several homes during this year’s outdoor-focused Near South Neighborhood Tour of Homes on May 9.

Staff were provided his Social Security check and a debit card issued by the state of Nebraska where his monthly government benefits are deposited. His guardian later discovered several concerning and unauthorized transactions on the card.

Eleven cars and three homes had windows broken by objects being thrown through them. In one case, a cinder block had been hurled onto a car, causing more than $1,500 damage, Officer Luke Bonkiewicz said.

Police said Kade Coble had been spotted in a vehicle but got out and ran at Antelope Park, near 33rd and South Streets, setting off a large search late Friday morning.

A cable and pulley system rises operates out of one of nine perimeter guard towers at the Nebraska State Penitentiary.