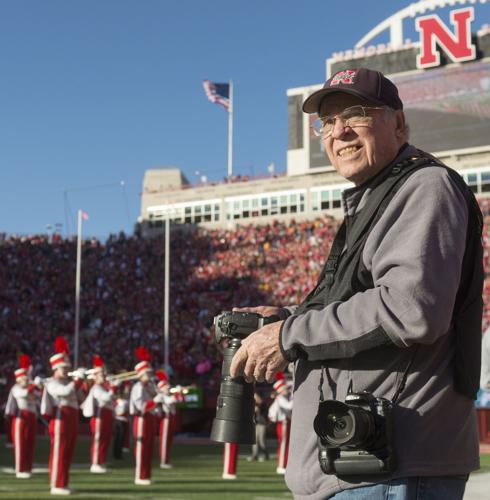 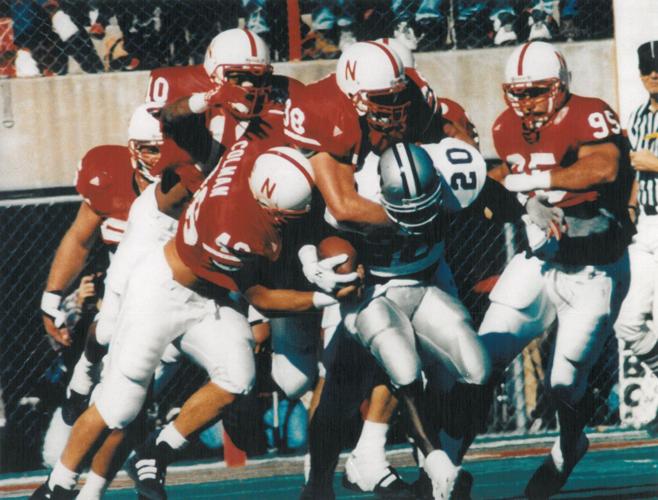 This photo by Richard Voges, a photographer for the Nebraska Athletic Department, was used by artist Fred Hoppe to create the Husker Legacy statue in 1997. The statue, which sits outside East Stadium, depicts six Husker defenders tackling a player from Kansas State. It was taken during the Nebraska-Kansas State game at Memorial Stadium on Oct. 22, 1995. 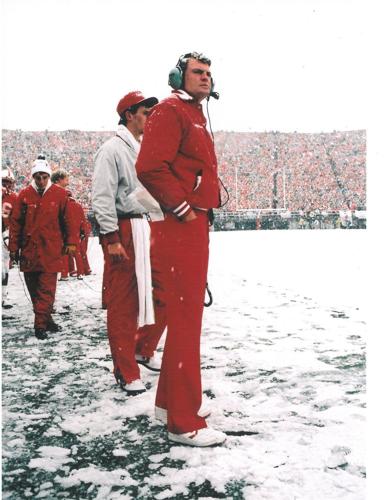 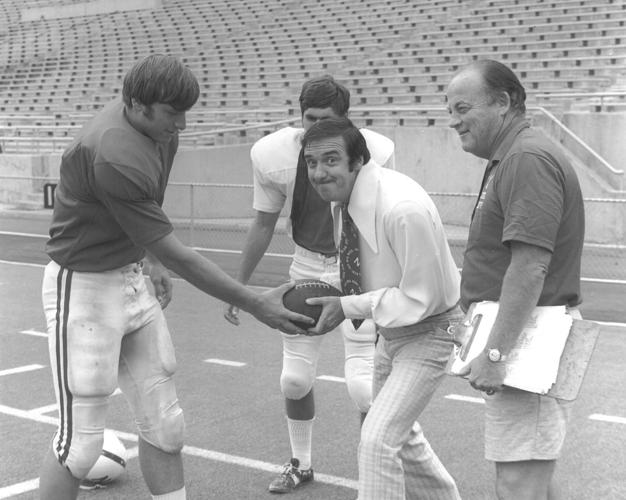 Quarterback Jerry Tagge hands the ball off to a unrecruited running back named Jim Nabors — the comedian and actor better known as Gomer Pyle — under the tutelage of a grinning Bob Devaney. 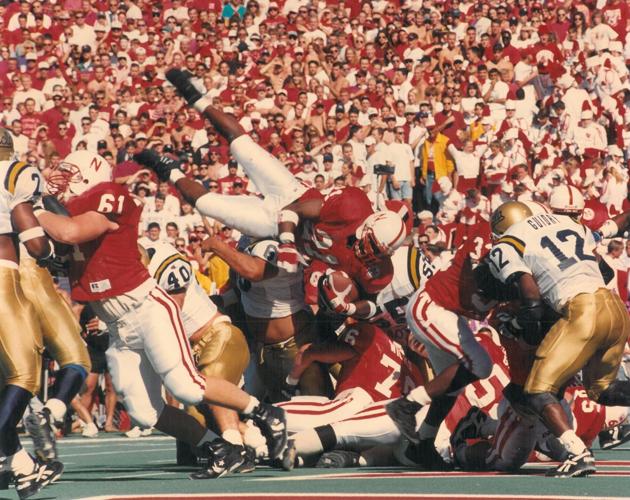 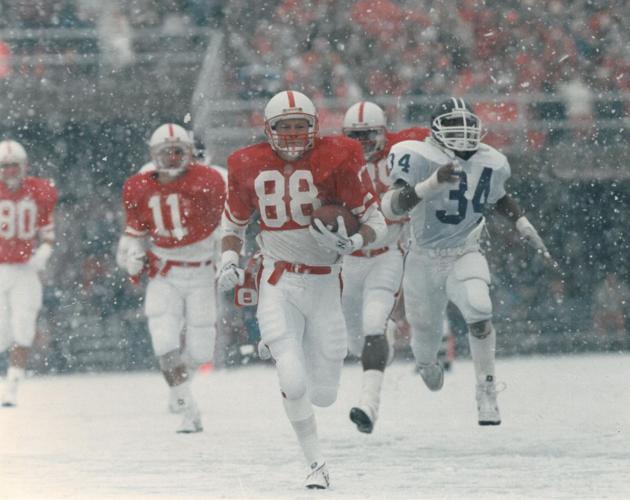 Rod Smith (88) tries to outrun both Mother Nature and Kansas State, but this 60-yard punt return was stopped at the Wildcat 4-yard line.

Richard Voges won first prize in the Steinhart Park fishing contest as a teenager, and with it, a Kodak Baby Brownie Camera and two rolls of film, courtesy of Long’s Drug Store in Nebraska City.

Voges took the first roll to the drug store to be developed. He developed the second one himself after studying up on the process.

The rest, as they say, is history.

Now 84, Voges has spent his life behind the lens, first taking photos for the high school newspaper and yearbook and later during airborne surveillance missions over Korea as a member of the U.S. Navy.

He later found work in a photo-reproduction company in San Francisco, printing murals for art connoisseurs and architects before returning to Nebraska City with his wife, Marguerite, and their three children.

“The journalism teacher told me about a job in the University of Nebraska’s photography department, and I got a job in the photo lab in West Stadium in November of 1959,” he said.

Voges didn’t shoot the final home football game that fall, a 14-12 squeaker against Colorado before 28,000 fans at Memorial Stadium, but he began his long career memorializing the exploits of Husker athletes that winter.

For the last 58 years, he’s been on the sidelines for Husker sports, capturing moments big and small both on the field and off.

“My first four or five years, it was just a job, you were paid to do it and you had to produce,” Voges said. “Then it finally dawned on me, you know, that this was a lot of fun down there.”

Despite “retiring” in 1999, he's continued to be a presence at each home contest, remaining committed to taking the official team photos and Senior Day portraits while continuing to search for that perfect photo.

The contenders for that honor are displayed from ceiling to floor in the walk-in-sized closet space he uses as a home office.

There’s Johnny Rodgers making an acrobatic leap for a one-handed catch, signed by the Heisman Trophy winner himself ("Johnny was always good for a photo," Voges said), Mikki Moore scraping the sky for a poster-worthy jam, and a scarlet-clad Tom Osborne standing resolute on a snow-packed sideline.

Voges also has captured life outside the boundaries of the playing field, creating a visual timeline of the growth of Husker football into a statewide cultural phenomenon.

Johnny Carson was always a popular persona to grace the sideline, posing for a picture alongside the cheerleading squad, as well as Bob Hope in a fuzzy, red hat, Gordon MacRae booming the national anthem from atop a box before a game against Kansas, or the time Van Cliburn sang the “Star-Spangled Banner” at the keys of a baby grand piano.

Voges also snuck a photo of Will Ferrell hiding underneath the maroon hood of a Southern Cal sweatshirt in 2007, and has thoroughly documented Larry the Cable Guy’s devotion to the Huskers, calling the Nebraska-born comedian one of his “most fun” subjects.

Voges also has a fondness for the softer side of the athletes he covered.

A black-and-white photo shows quarterback Jerry Tagge handing the ball off to a unrecruited running back named Jim Nabors — the comedian and actor better known as Gomer Pyle — under the tutelage of a grinning Bob Devaney.

Along with several photos of the late Anthony Steels bounding into the end zone are intimate shots of the moment the Husker wingback sang the national anthem in front of a sellout crowd before a 1981 home football game.

One of Voges' photos was used as inspiration for the statue erected outside the Gate 20 entrance at Memorial Stadium: a hapless Kansas State player collapsing under a gang of Blackshirts.

Having prowled the sidelines long enough to have witnessed the first night game played at Memorial Stadium — an event he captured from a small plane circling over the stadium in pouring rain — Voges has been witness to each of the Huskers' 361 consecutive home sellouts and seven head coaches since 1960.

A lot’s changed, he said. “There used to only be a dozen of us down there shooting the game. Now it’s so packed, you can hardly get in there to get a good shot.”

Cameras have come a long way from the time he pulled the biggest fish from the Steinhart Park pond, too. No more are the days of cranking film or long sessions in a dark room, just the click-click-click of the shutter and pushing a card into a digital reader.

Voges said he’s “90 percent sure” Friday’s home finale against Iowa was his last game among the media scrum on Tom Osborne Field, but he’s not going to rule anything out when the team takes the field next Sept. 8 against Colorado.

“I’ve gotten to know the other photographers and the event staff,” he said. “It’s just sort of a friendly place to be.”

Iowa raced away in the second half for a 56-14 win over Nebraska on Black Friday. Photos from the action in and around Memorial Stadium by the…

Irving community embraces its chimney swifts; why everybody should care about them

Here’s what happens when you have a nationally known wildlife conservation photographer living in your neighborhood: You see things differently.

Steven M. Sipple: 'Silly season' not so silly at all for Nebraska football coaches under fire

They call this the "silly season" in college football. But there's nothing amusing for the Nebraska coaches who likely will be shown the door within 24 hours of Friday's 3 p.m. game against Iowa at Memorial Stadium.

In a first for National Geographic, the magazine's April issue has 10 different covers featuring the work of Lincoln photographer Joel Sartore.

Husker cheerleaders from 1940s look back on time at NU

On gamedays in Lincoln, you can still find Anna "Hink" Sahs among the 90,000 fans in Memorial Stadium, cheering and chanting for the Huskers, …

This photo by Richard Voges, a photographer for the Nebraska Athletic Department, was used by artist Fred Hoppe to create the Husker Legacy statue in 1997. The statue, which sits outside East Stadium, depicts six Husker defenders tackling a player from Kansas State. It was taken during the Nebraska-Kansas State game at Memorial Stadium on Oct. 22, 1995.

Quarterback Jerry Tagge hands the ball off to a unrecruited running back named Jim Nabors — the comedian and actor better known as Gomer Pyle — under the tutelage of a grinning Bob Devaney.

Rod Smith (88) tries to outrun both Mother Nature and Kansas State, but this 60-yard punt return was stopped at the Wildcat 4-yard line.