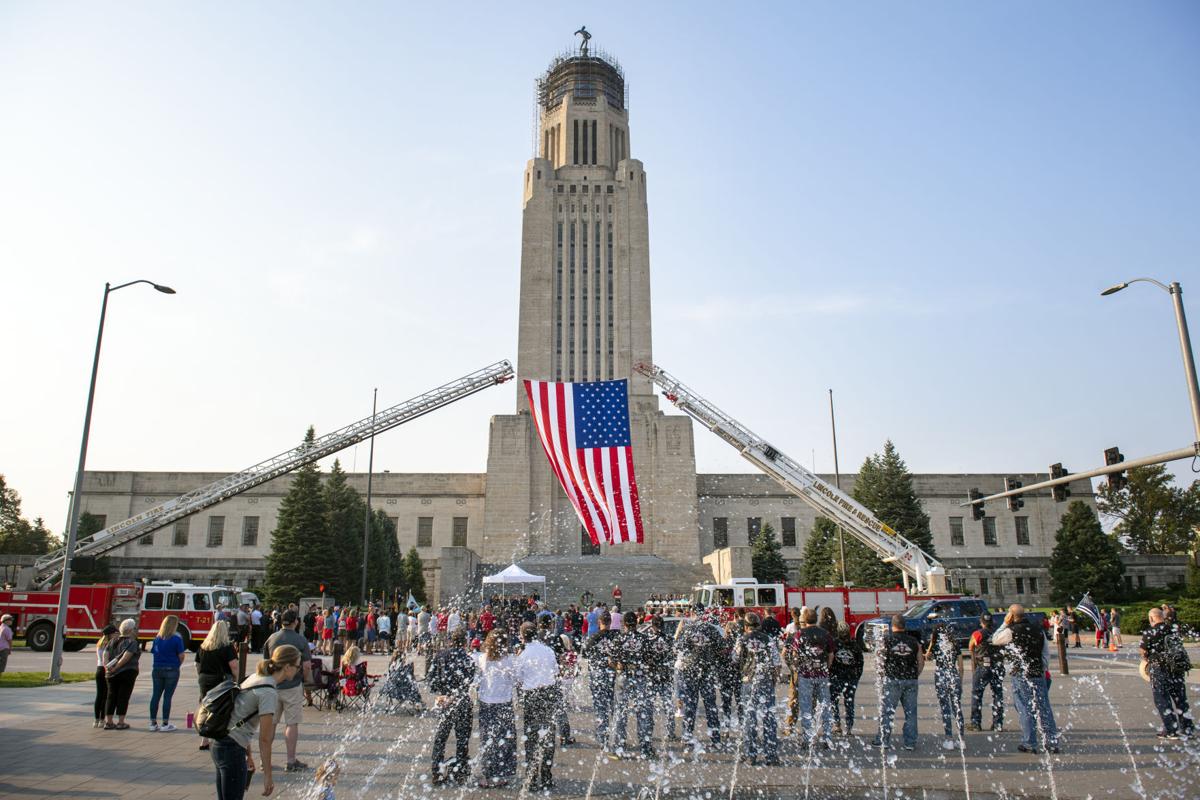 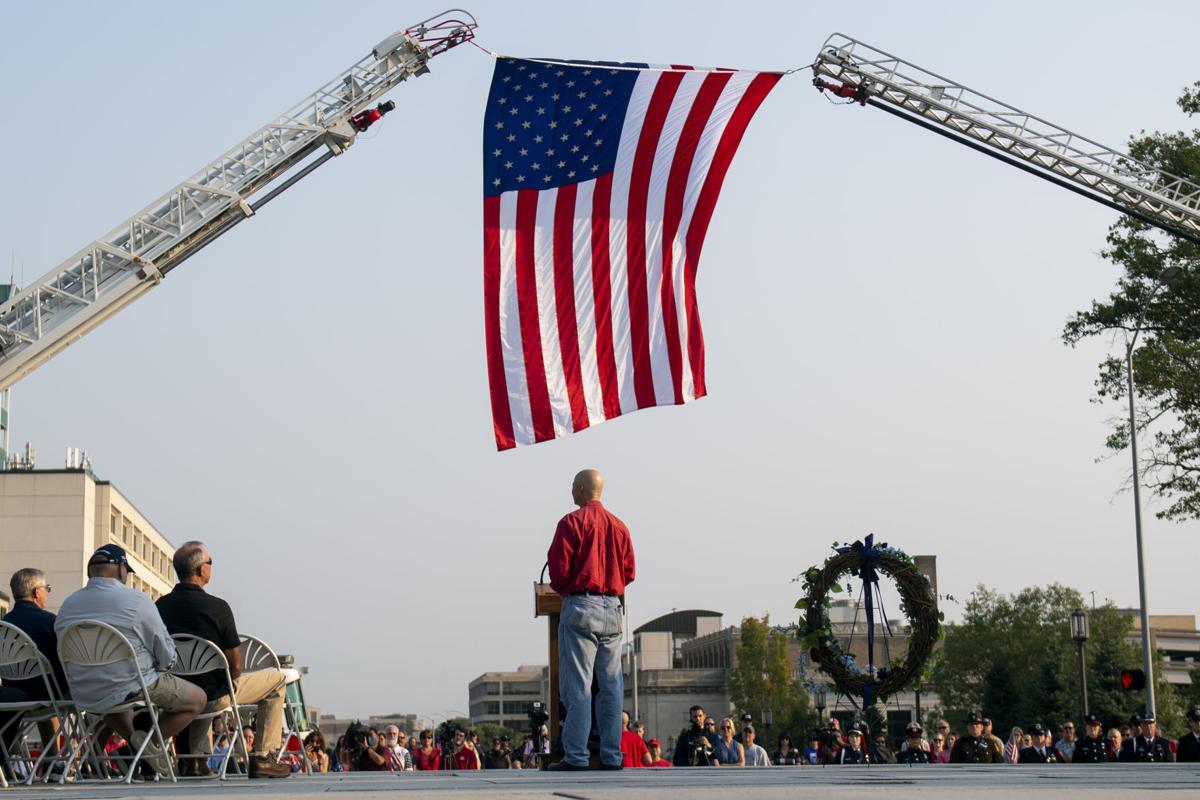 Nebraska Gov. Pete Ricketts speaks during the 9/11 20th anniversary ceremony hosted by Lincoln Fire and Rescue on Saturday at the state Capitol. 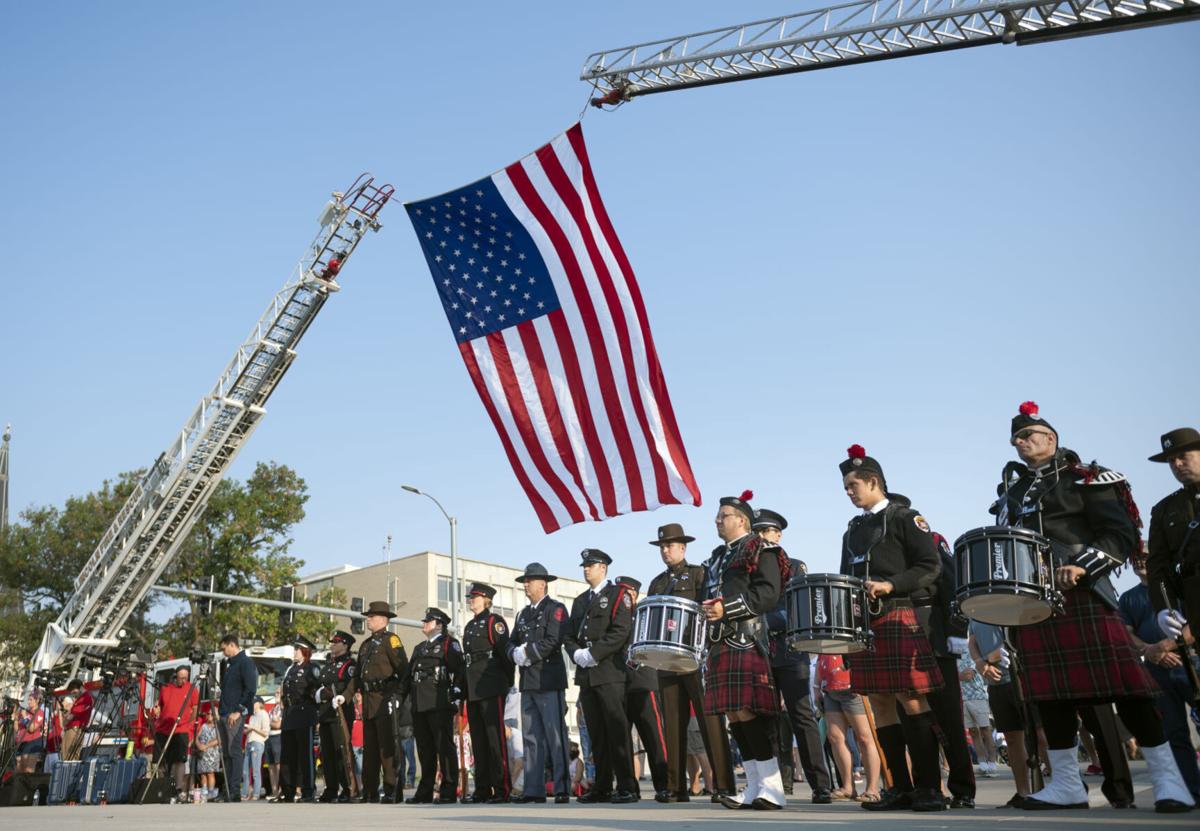 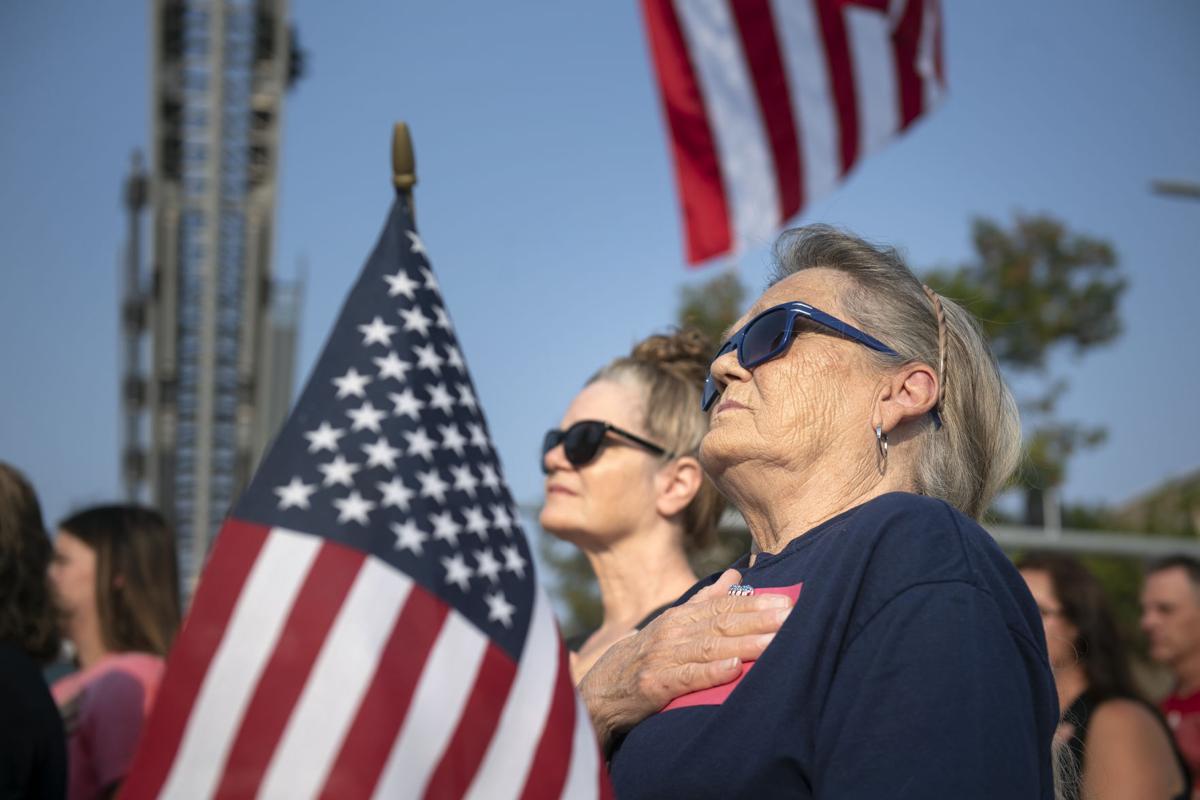 Cheryl Cook (center) and Brenda Steinkamp attend the 9/11 20th anniversary ceremony hosted by Lincoln Fire and Rescue on Saturday at the state Capitol.

Two Patriot Day programs were held in Lincoln on Saturday morning, 20 years after the 9/11 attacks on America.

Both ceremonies, one at the steps of the state Capitol and the other at the Veterans Memorial Garden in Antelope Park, were held about 30 minutes apart, each honoring first responders and military members.

The morning started with a remembrance ceremony hosted by the Lincoln Fire Department honoring the members of Nebraska Task Force 1 who rushed to the aid of those in New York City and the Pentagon 20 years.

"As the rest of us stayed glued to our television sets watching in shock as the glass and steel of the World Trade Center erupted in smoke and then buckled and collapsed, 61 of our task force members quickly made their way to New York City, while two others headed to the Pentagon," Lincoln Mayor Leirion Gaylor Baird said.

A second ceremony followed at the Veterans Memorial Garden, hosted by the Lincoln Parks and Recreation Department.

Craig Anderson, a member of the Veterans Memorial Garden advisory council, told attendees "We have not and we will not forget."

The annual ceremony has been held every year since 2002, but this year it holds a different weight, Anderson said.

"It's especially impactful today with it being 20 years later," he said. "It's very important to keep the memory of this alive and teach the younger generations what service is about."

As the Mayor of Lincoln on Sept. 11, 2001, I drove into work that Tuesday morning listening to the news on the local radio station. I remember…

"It's very important to keep the memory of this alive and teach the younger generations what service is about," said Craig Anderson, a member …

After spending a week in Grand Isle, Louisiana, after Hurricane Ida, Union College volunteers from the International Rescue and Relief program reflect on their time spent helping the community recover.

The 9/11 attacks forced a change in U.S. military operations, speeding up a post-Cold War trend of using Guard and Reserve units much more in real-world and combat situations.

Despite the unrest in Afghanistan and the Middle East, battalion commander Lt. Russ Hewitt of Lincoln said, soldiers are ready for the mission. “The unit is really excited to have this opportunity."

Gov. Pete Ricketts signed an executive order Thursday that will require the POW/MIA flag to be flown at all state buildings that fly the American flag.

Nebraska Gov. Pete Ricketts speaks during the 9/11 20th anniversary ceremony hosted by Lincoln Fire and Rescue on Saturday at the state Capitol.

Cheryl Cook (center) and Brenda Steinkamp attend the 9/11 20th anniversary ceremony hosted by Lincoln Fire and Rescue on Saturday at the state Capitol.