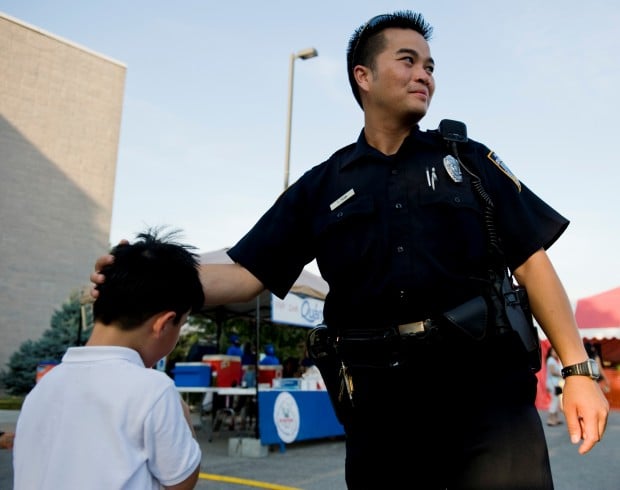 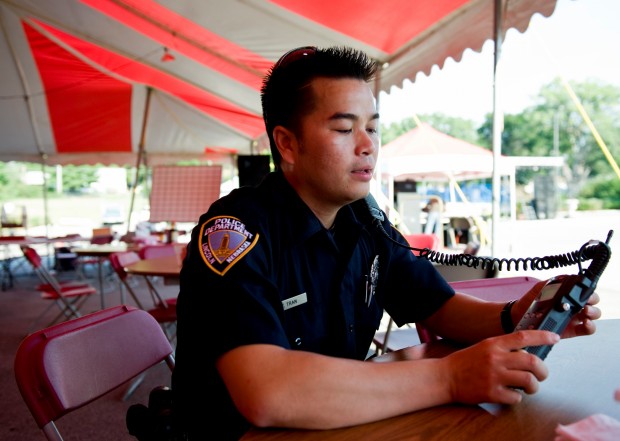 Lincoln Police Officer Tu Tran listens to his scanner while volunteering at the annual Viet-Linh Festival on Saturday, Aug. 24, 2013, at  Immaculate Heart of Mary Catholic Church. 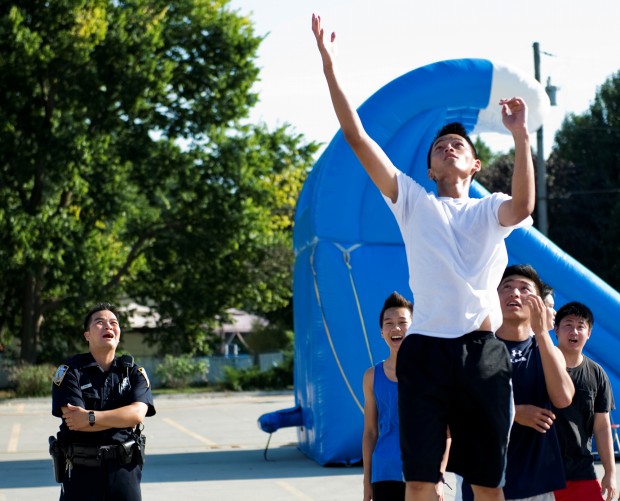 At age 5, Tu Tran seemed an unlikely candidate to become a police officer in a Midwestern college town.

His family shared a one-room house with a roof of straw and palm leaves in a small South Vietnamese farm village. Instead of going to kindergarten, he worked with his sister picking up plastic bags and seeds to sell.

“I’m pretty sure back then … my parents, older brothers and sisters were terrified of them,” Tran said of police. “Back in Vietnam, they can do whatever they want with no consequences.”

It’s a fear Tran’s family -- and many others from volatile, oppressed regions -- brought  when they came to Lincoln as political refugees.

Today, Tran is 27, has been a cop for three years and is on the front lines of the Lincoln Police Department’s efforts to increase its diversity and foster trust with minorities. He is one of six officers to have passed the department’s proficiency test for a second language -- the only one to pass for a language other than Spanish.

Tallest in the world

Tran’s father, Tri Tran, was in the South Vietnamese Army. He was captured after the fall of Saigon in 1975 and sent to a camp.

“They called it a re-education camp, but it was more of a work labor camp,” his son said.

Tri Tran toiled in that camp for eight years before returning to his family and the small village where he farmed.

In 1992, he and his wife brought their eight children to the United States and settled in Lincoln with the help of Catholic Social Services.

The day they arrived was cold, Tu Tran said, mid-November and snowing.

“I can remember I was still in my T-shirt and shorts. It was cold, but it wasn’t that cold because I was so amazed. It was the first time I’d seen snow.”

The family’s sponsors drove them through downtown on the way to their new home. To Tran’s 6-year-old eyes, the buildings seemed the tallest in the world.

His dad got a job with a window manufacturing company making $10 an hour. The family often lived paycheck to paycheck, but overall they were happy, Tran said.

He learned English at school, but his parents wanted him to learn their language, too, and signed him up for classes at church.

Lincoln’s Vietnamese community was small  then, and life centered around Immaculate Heart of Mary, where families gathered on weekends to sell egg rolls, sauces made with chili peppers and spiced beef soup with rice noodles to support the congregation. The air smelled of garlic, lemongrass and ginger, Tran recalls.

How'd you get my number?

Tran’s cellphone number passes through the Lincoln Vietnamese community from hand to hand.

“The other day, somebody called me instead of 911 on a domestic disturbance.

“They can call 911, but they don’t know what to say. They think 'what happens if Tu isn’t working? How am I going to tell the officers what is going on?’”

Tran doesn’t mind. It’s what he signed up to do.

Vietnamese tradition says family matters stay within the family. But tempers boil, neighbors argue, lovers quarrel, fists connect. Someone calls 911, and police show up. People are angry, scared. They speak in rapid Vietnamese, broken English or not at all.

“Because they come from a place where the police are the government and the government is the police, they are hesitant to reach out to us,” she said. “Sometimes we get these calls for service, domestics or bad assaults where somebody needs to be hospitalized, but nobody wants to step forward to make a complaint or be a witness. They are afraid if they open their mouths, something bad is going to happen to them.”

Police have developed a pool of community members able and willing to translate 11 languages for them and also uses LanguageLinc, a Lincoln-based business that provides professional interpreters.

A trained officer who shares the same background and speaks the language is a valuable asset,  Chief Jim Peschong said.

Still, it can be hard to get people to open up and break ingrained taboos.

“They still don’t trust police,” Tran said. “It is a problem I’m trying to explain to people. 'It’s OK. You can talk to me.'

“I’ve had people tell me, ‘Don’t tell the other officers that he said he was going to kill me,’ or things like that. ‘Please don’t tell anybody. Please don’t document that. I’m just telling you. Keep it a secret.'”

He can’t do that, he explains; he has a job to do.

Relations between police and minorities reached an all-time low in the mid-1990s following the death of Francisco Renteria.

Renteria, who spoke only Spanish, was arrested  the afternoon of Oct. 1, 1994, because of a case of mistaken identity. He struggled and was put into a hog-tie restraint and thrown into the back of a cruiser. He died, and official investigations and four separate medical opinions produced no consensus on why. One pointed to aspiration on vomit and compression of his neck, another to positional asphyxiation because of the restraints.

Then-Chief Tom Casady, two officers and a fire captain were put on paid leave and brought up on criminal charges. The officers and fire captain eventually were acquitted, and charges against Casady were dropped. The city settled with Renteria’s family for $200,840, but it made no admission of wrongdoing.

Long-time community activist Jose Soto, who acted as spokesman for the family, says the department has improved in terms of community relations, outreach and inclusion of minorities since Renteria's death.

“Having said that, there have been missteps, areas of concern that continue to need attention," said Soto, vice president for access, equity and diversity at Southeast Community College-Lincoln.

"Could there be more diversity? The answer is obviously yes, but I don’t think that is specific to the Lincoln Police Department. I think all our social agencies and organizations in town need to be responsive to demographic changes in community.”

One of the core issues then and now, he said, is trust -- trust that people will be treated fairly and get the same level of service regardless of ethnicity, immigration status, culture, nation of origin or English language proficiency.

Of LPD's 321 commissioned officers, 94 percent are white and 6 percent are people of color. Adding in the department’s non-commissioned employees brings the total of minorities to 25, or 5 percent of its 467 employees.

Citywide, about 86 percent of Lincoln residents identified as white in the 2010 Census.

Peschong said the department worked constantly to increase diversity, but the number of minorities who apply and meet its criteria remains low.

The city also has tried enticing minority officers from other communities, he said.

“We have had some success in that, but what we have found is that we haven’t been real successful in being able to retain them,” Peschong said. “Lincoln just doesn’t really have a real diverse population. So they struggled feeling comfortable in Lincoln as far as with their personal life.”

As part of a long-term plan to improve its image and tap young talent, he said, the department sponsored police clubs at area high schools this year. Officers meet with students interested in law enforcement, mentor them and offer a look at real-life police work.

Most young people have a skewed view of police thanks in part to popular media, he said.

“Obviously, the way we police in the city of Lincoln is entirely different than anything you see on TV.”

Becoming a police officer was not a career path Tu Tran considered in high school.

Vietnamese children get a lot of pressure to bring honor to their families, he said, and when he graduated from Lincoln High and told his parents he wanted to be a doctor they were ecstatic.

“It is one of those Vietnamese things where you want to have a job that makes your family look good. You’re raised to do really well in school, so that once you go out into the workforce, you should do something that is like a professional, professional job.”

He graduated from Creighton University with a degree in chemistry and got a job with a pharmaceutical company. It wasn’t for him.

“I did some research, looked back at what I really wanted to do, or what I thought I wanted to do,” Tran said.

He applied to become an officer.

His parents were worried it would be dangerous work, but Tran loves it.

A couple of months ago, he said, he and another officer responded to a 911 call from a young woman who was baby-sitting. She was crying and thought someone was in the house.

“The moment she saw us walk up, she was relieved,” he said.

They checked the house and found nothing, Tran said, and the relief on her face made the long nights dealing with drunks, filling out paperwork, suffering the occasional racial slur worth it.

“It has always been really exciting in this job. You get your bad days, your down days. But … I think it is my calling, my vocation.”

Lincoln Police Officer Tu Tran listens to his scanner while volunteering at the annual Viet-Linh Festival on Saturday, Aug. 24, 2013, at  Immaculate Heart of Mary Catholic Church.