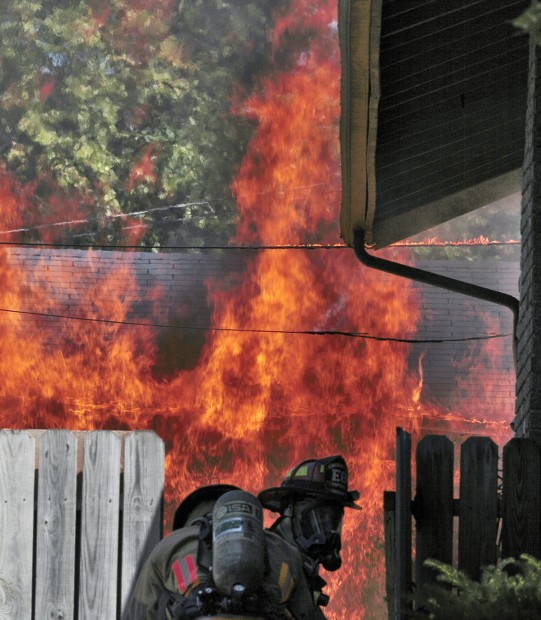 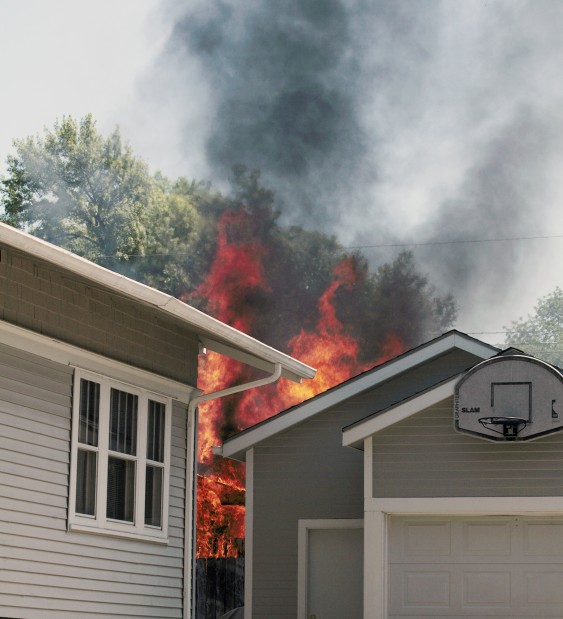 Thanks to observant neighbors and a couple electrical contractors, firefighters reached a Lincoln family’s home near South 11th and Hill streets just in time to save it from the flames that devoured their garage Monday.

Sentry Electric Inc. employees Alan Kriegler and Dustin Thomas were sitting in a company truck having lunch just after noon when they noticed smoke a half block away.

“I thought it was a smoker. But (Kriegler) said, ‘No, smokers don’t do that’,” Thomas said.

The men checked it out and found flames eating the detached garage at 1118 Hill St. They called 911 and grabbed a neighbor’s garden hose, but the fire had spread too far for that.

Kriegler said he heard an explosion from inside the garage and a dog yelping in the back yard. He opened the fence to let the corgi escape.

Neighbors grabbed the dog and called the homeowners, Matthew and Wendy Rhoads.

Monica Janssen, who was doing yard work a couple houses away when the fire started, was shocked by the sight.

“There were huge flames and just tons of billowing smoke,” she said.

The initial call about the fire didn’t include an address, but firefighters found the house by following the smoke, Lincoln Fire and Rescue Capt. Mark Heithoff said.

Firefighters evacuated a 14-year-old boy from the home, he said, and quickly doused the flames, which had melted the siding off the back of the house.

Total damage, including loss of the garage contents, was $30,000, Damon said.

Damon said the fire was unintentionally set by the boy, who lit a piece of notebook paper on fire then discarded it in a combustible trash can in the garage.

It's natural for children that age to be curious about fire, Damon said, but not to burn buildings. He recommended parents keep matches and lighters out of children’s reach, especially during the summer months when they are out of school.

Lincoln Police have identified the 36-year-old found dead in a car outside a south Lincoln grocery store and have scheduled an autopsy to determine the cause of his death.

Officer Erin Spilker confirmed that LPD fielded a medical call at 7:42 a.m., sending officers and medics to the Edgewood Shopping Center at 56th Street and Nebraska 2.

A nationwide TikTok trend that prompts participants to kick — and sometime break through — doors has made its way to Lincoln, according to police.

A Nebraska State Patrol trooper shot a man in a struggle over a gun outside an apartment near 19th and G streets t around 2:45 p.m., according to the agency's superintendent.

The AAUP's vote to remove UNL from its Censure List signals satisfaction with changes to clarify disciplinary procedures for employees across the university system adopted by the Board of Regents in April.

First responders were dispatched to the home at 1055 Seventh St. just before 4:30 a.m. and found the residence fully engulfed in flames.