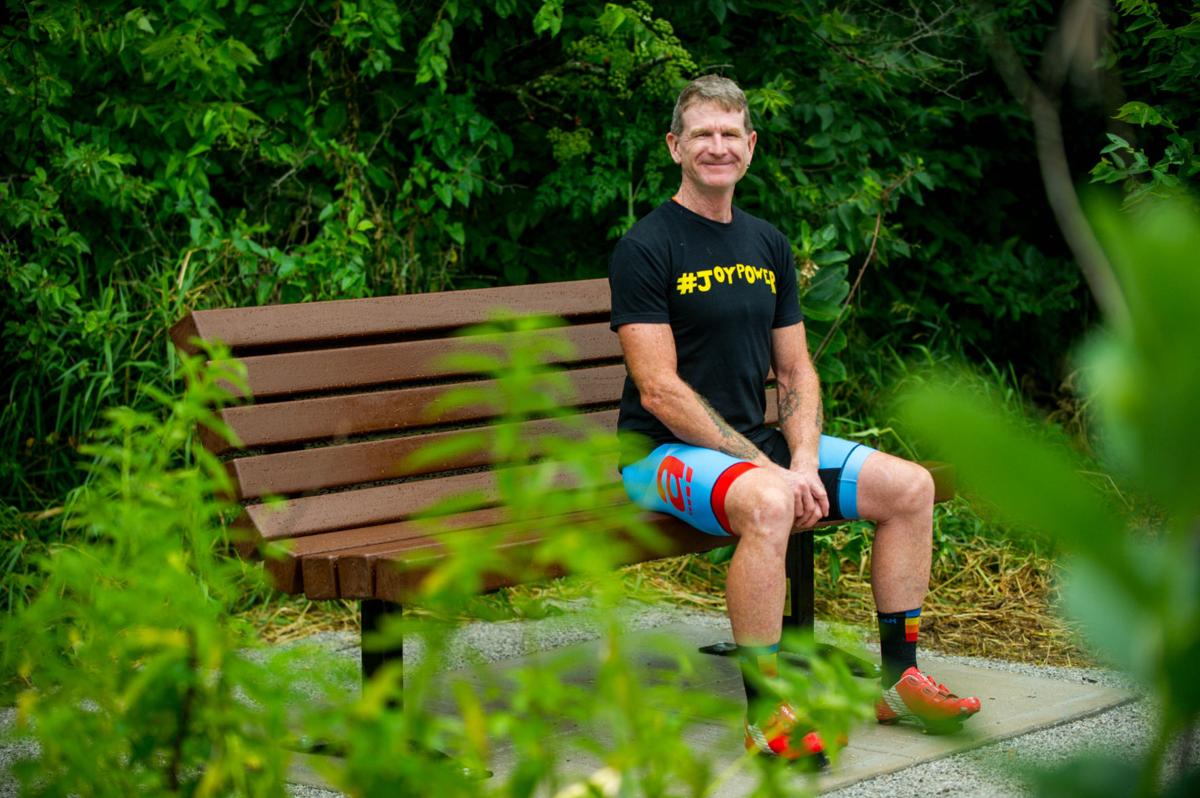 Robb Finegan sits on a bench along the MoPac Trail dedicated to his late wife, Joy Margheim. 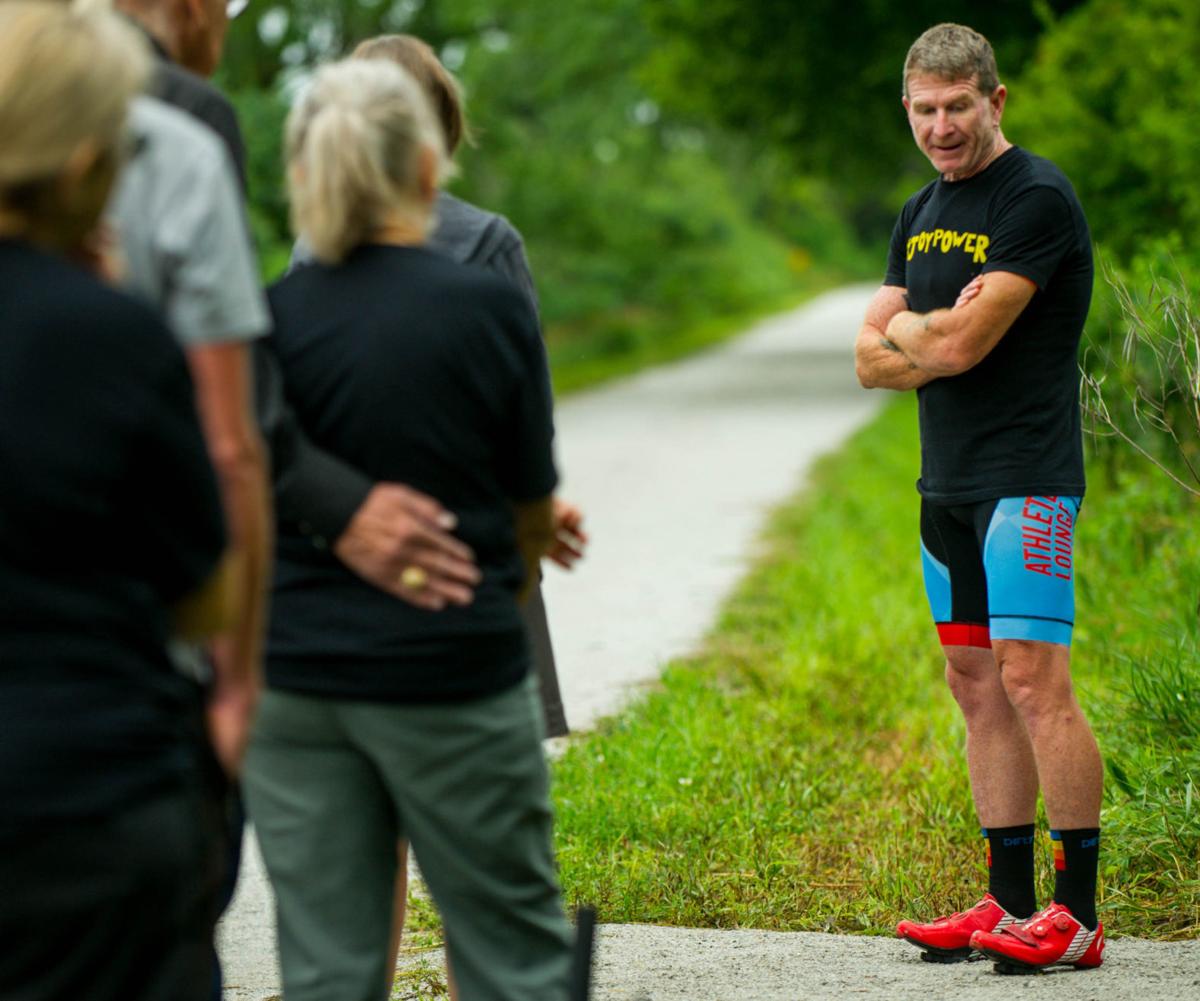 Robb Finegan talks to his friends and family about his late wife, Joy Margheim, at a ceremony dedicating a bench along the MoPac Trail to her. "We have a lot of Joy here today," Finegan said. 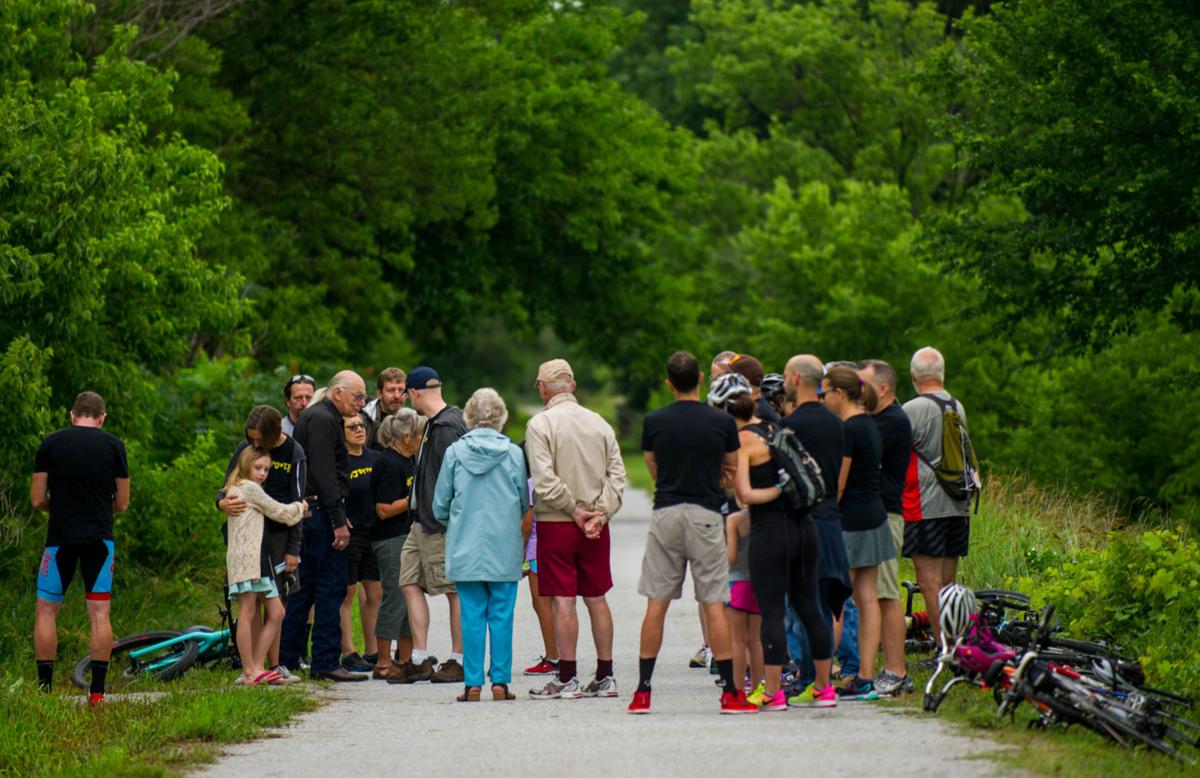 Robb Finegan (left) and friends and family chat about his late wife, Joy Margheim, at a ceremony dedicating a bench along the MoPac Trail to her.

Mulberry trees frame a freshly poured bench at the 2-mile mark of the MoPac East Trail, a mile from the Walton Trailhead.

Steps off the crushed limestone path, the bench overlooks the grasses and flowers of Fletcher Prairie as birds trill morning songs.

Robb Finegan, wearing a black shirt with “#JOYPOWER” in bright yellow letters, sits on the bench, smiling. He’s surrounded by a group of about 25 friends and family members, bikes lining the side of the path, gathered to support him for the significant event — dedicating the bench to Joy Margheim.

Margheim, Finegan’s wife, died of cancer in February, a few months before their 25th wedding anniversary. Margheim ran on the MoPac East Trail a lot, and she would have enjoyed seeing the bench get a lot of use, he said.

The MoPac is one of many trails Finegan rides as a cyclist specializing in gravel racing. After Margheim’s death, he devoted this season of races to her — every bit of the more than 6,000 miles he’s spent in the bike saddle this year.

For Finegan, racing is a way to honor Margheim, spinning his grief into victories. He’s backed by community cycling groups across the country, who support their own with a strong bond fortified by countless miles riding together.

Finegan has never minded biking six or eight hours by himself, and Margheim had never minded the time he spent training.

Both natives of Alliance, they dated in high school and got married in 1993. They lived all over — Portland, Oregon, St. Louis and then Lincoln for Margheim’s last months.

Fifty-year-old Finegan was a professional runner for the first eight years of their marriage, running half and full marathons competitively. He won the Lincoln Half Marathon a few times and competed in the 1996 Olympic Trials.

“She was just so supportive of me throughout all the years of running and in the last couple years of cycling,” Finegan said. “She always liked to see me succeed and throughout all of our years was always there in the highs and lows of my racing careers.”

Margheim was a talented editor and artist who shied away from the spotlight in favor of supporting others, Finegan said. She worked as a freelance editor in Oregon and managing editor at University Press in Lincoln, and had a wide variety of artistic outlets: metalwork, sculpting, weaving, drawing. She also ran local races and biked often.

Finegan fell out of racing around 2004, and running his own outdoor business became his focus. He has mostly worked at outdoor companies; he managed his own in Portland and worked at stores in St. Louis and Lincoln. He currently works in sales at Lincoln Running Company.

He turned to biking as a way to de-stress without putting pressure on an injured knee, and quickly started earning a reputation as a “madman” on the bike, said fellow cyclist Lindy Carroll, who lives in St. Louis.

The first time they met, Finegan was on a bike ride on a gray, sleety day — a day when no one else dared to be out riding.

Carroll had heard about Finegan’s dedication from other cyclists, so when he saw a biker pulling up to the outdoor outfitter store he worked at, he knew it could only be Finegan.

“He’ll ride (in temperatures of) minus 13, he’ll do long rides of 130 miles, things like that,” Carroll said, laughing. “Here’s this guy pulling up — it’s gray out, sleeting, cold as heck, nobody’s out riding his bike — I see this guy and think it’s gotta be Robb. And it was.”

Finegan stands apart from the pack, Carroll said, because he’s willing to ride in a sustained level of pain that not many other cyclists are — he has “the ability to reach deep into his pain cave.”

At that time, Finegan had recently joined the Maplewood Bicycle Team in St. Louis, and Carroll was also a member. Soon after, Finegan discovered the growing sport of gravel racing and was drawn to the difficulty it presents.

Gravel racing features longer courses, tougher elements and different terrains from road racing. Cyclists often perceive a race more as a challenge against the course instead of against other riders. While the sport is still in its infancy, Finegan said, it’s growing fast in popularity.

“And I like the challenge,” he added with a chuckle.

Finegan always seems to be laughing, smiling and sharing positivity with others, and is known to often help fellow bikers on the course, Carroll said. Gravel is different from other cycling races because it has more of a communal feel to it — partly because course conditions can present unpredictable circumstances, and there’s a shared understanding that bikers should help each other out when possible.

Although Carroll has known Finegan for only about two years, cycling has helped them grow close and sustained their friendship after Finegan and Margheim moved back to Lincoln to be closer to family and friends.

Her colon cancer was in remission after being diagnosed in January 2017, but they wanted to move anyway. Then, in December, the cancer came back and spread to her pancreas, liver and bones.

Carroll was shocked when he saw the news on Facebook, thinking the cancer had firmly been in remission. He wanted to offer support but wasn’t sure what to say.

“I started to type something and I stopped; what do you say to a guy whose wife is ailing on Facebook in front of everybody,” Carroll said. “You want to instill your friends with strength, and that’s where it popped into my head — I just wanted to send her power.”

He typed “#JOYPOWER” and sent it. The message clicked with Finegan immediately.

“I showed it to Joy and I said I’m gonna make this thing go viral,” he said with a laugh.

The Maplewood team went on a #JOYPOWER ride. A group biked with cardboard cutout letters of the hashtag and took a picture of cyclists holding the letters in the middle of the ride.

The letters in the photo became a T-shirt design and tattoo on Finegan’s left forearm. He’s selling the shirts at Lincoln Running Company and donating proceeds to the Humane Society in Margheim’s name.

“For me, there was a hole in my world after our friend Randy passed away last year,” he said. “I don’t want to put (Finegan) in that mental state before (rides). It’s an escape.”

Shear said having Finegan as a riding partner came at a good time for him because he was shaken after the death of Gibson, and Finegan’s re-entry into the Lincoln cycling community helped him stick with riding. Finegan’s strength gave him something to aspire to.

“If we show up at a race, I’m one place down,” Shear said. “It’s understood, (Finegan’s) faster than I am. I’m just going to try hanging on as long as I can and learn as much as possible.”

Finegan and Shear ride about three times a week, chatting and bantering a bit but mostly pushing each other to their limits by tackling the hilly gravel roads around southeast Nebraska.

Making this year of racing about #JOYPOWER has given Finegan an extra edge in training, and he said he’s learned a lot from Margheim’s journey.

“I didn’t realize how much pain the human body can undergo until this year when you really see it with someone,” he said. “That’s given me a little extra push to know, anytime I feel tired on the bike, I think of what she went through.”

Finegan averages about 300 miles a week. He said he’s also racing more and has already completed a few races this season, with plans to compete in at least eight or nine more.

He earned a third-place division finish at this year’s Dirty Kanza, a 206-mile behemoth of a race that draws national competition. His cyclist friends say he would have placed higher had he not spent about 20 minutes helping a teammate.

For many gravel cyclists, the Dirty Kanza is the ultimate physical and mental test, and Finegan was drawn to its intensity. He completed this year’s course in 12 hours, 43 minutes, better than his first attempt in 2017.

“I don’t care how good you are, you’re gonna have a bad spot somewhere,” Finegan said. “It’s a long day for everyone. There’s a lot of people that don’t always handle it as well.”

One of the toughest parts of his day was from the second to third checkpoints. He still had 100 miles to go, through brutal heat and relentless winds. That leg of the race featured daunting hills dotted with groups of cyclists.

Whenever the race was rough, he looked down at the stem of his bike. In the spot connecting his handlebars to the frame, he had taped the word #JOYPOWER.

“Anytime I felt tired I looked down at that,” he said, smiling. “Just a little boost.”

It didn't matter if it was raining, snowing or sleeting. Randy Gibson wore the same thing everyday: a pair of shorts and a worn pair of black …

Dan Rotherham was on a bike nearing the Canadian border on Sept. 11, 2001.

Madison Shaw is looking to follow in the footsteps of another small-town Nebraska girl.

When Ashton Lambie is at the starting line of a high-stakes cycling race, he has a focus cultivated not only by training, but by a piano pract…

Learn about the Oregon Trail across Nebraska

Over 175 years ago, adventurers who wanted to travel west began making their way across the Oregon Trail. According to NebraskaStudies.org, ap…

A record 5,200 runners on 640 teams will compete in the 11th annual Market to Market Relay on Saturday.

Robb Finegan sits on a bench along the MoPac Trail dedicated to his late wife, Joy Margheim.

Robb Finegan talks to his friends and family about his late wife, Joy Margheim, at a ceremony dedicating a bench along the MoPac Trail to her. "We have a lot of Joy here today," Finegan said.

Robb Finegan (left) and friends and family chat about his late wife, Joy Margheim, at a ceremony dedicating a bench along the MoPac Trail to her. 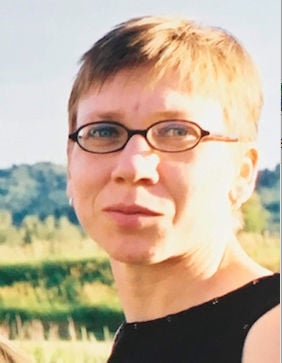