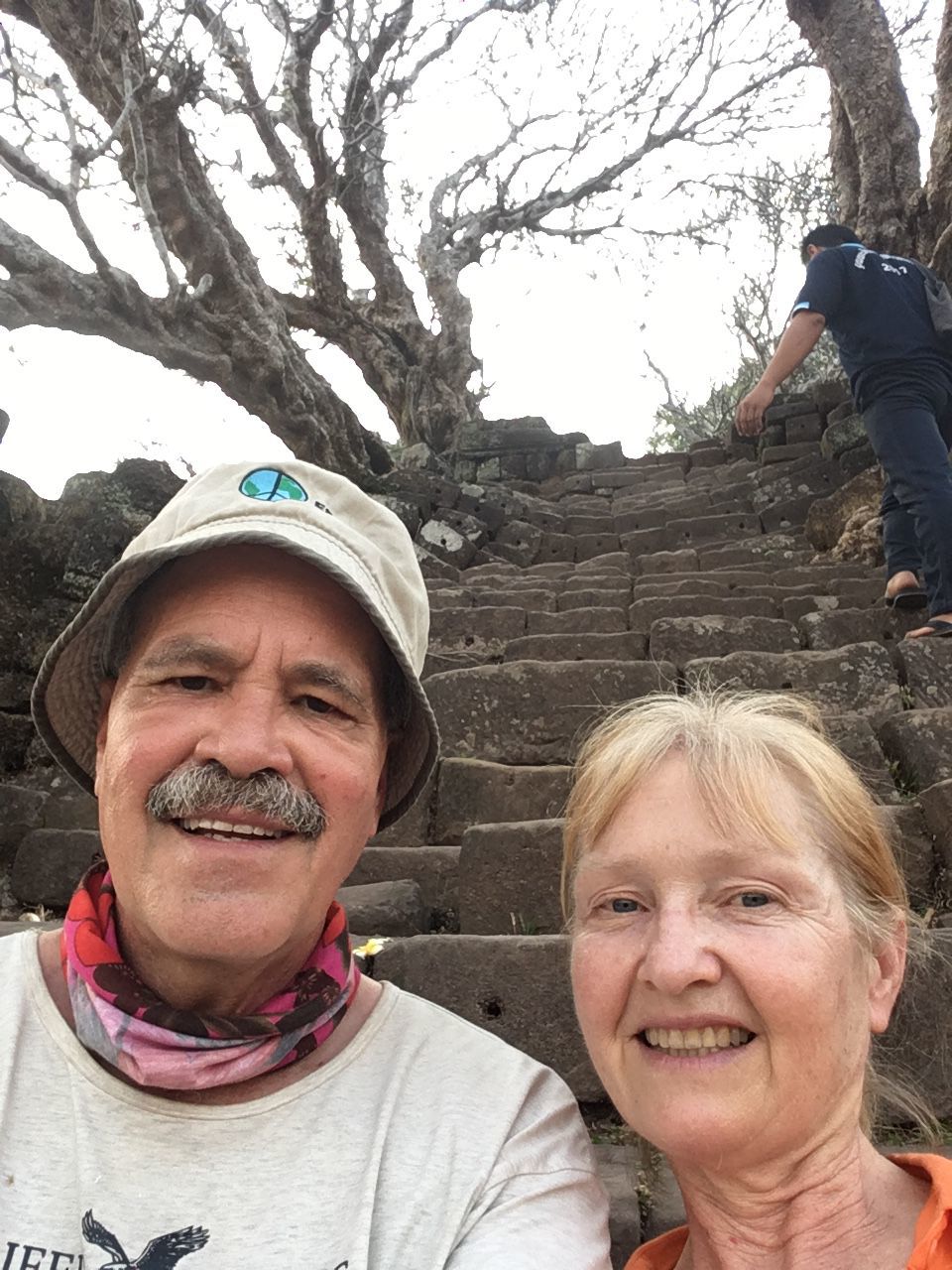 Steven and Janine at Vat Phou Ruin in Laos. 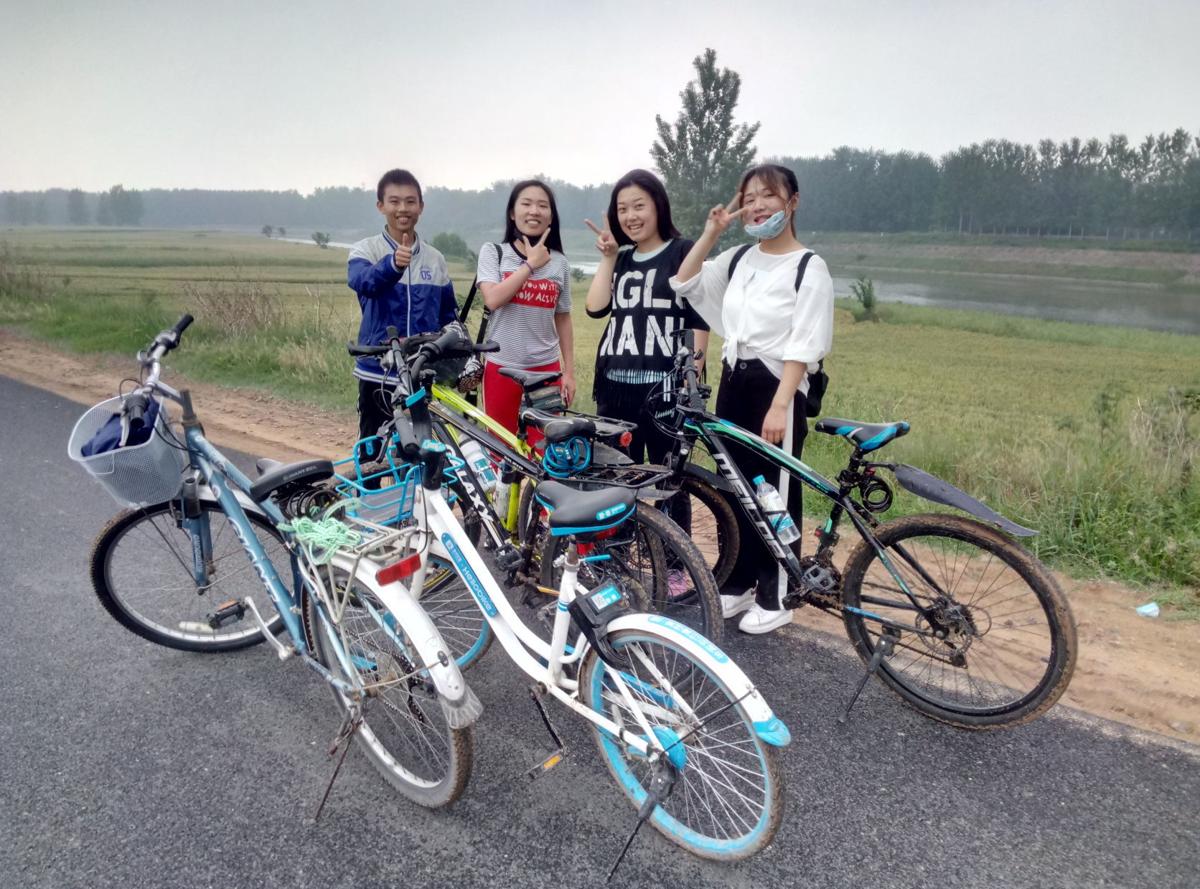 Students often joined Steve and Janine on bicycle adventures outside of the city to practice their English speaking skills. Masks help protect riders from the poor air quality. Pictured east of Zhoukou near the Shahe River are students whose chosen English names are Stephen, Christine, Sunshine and Christa. 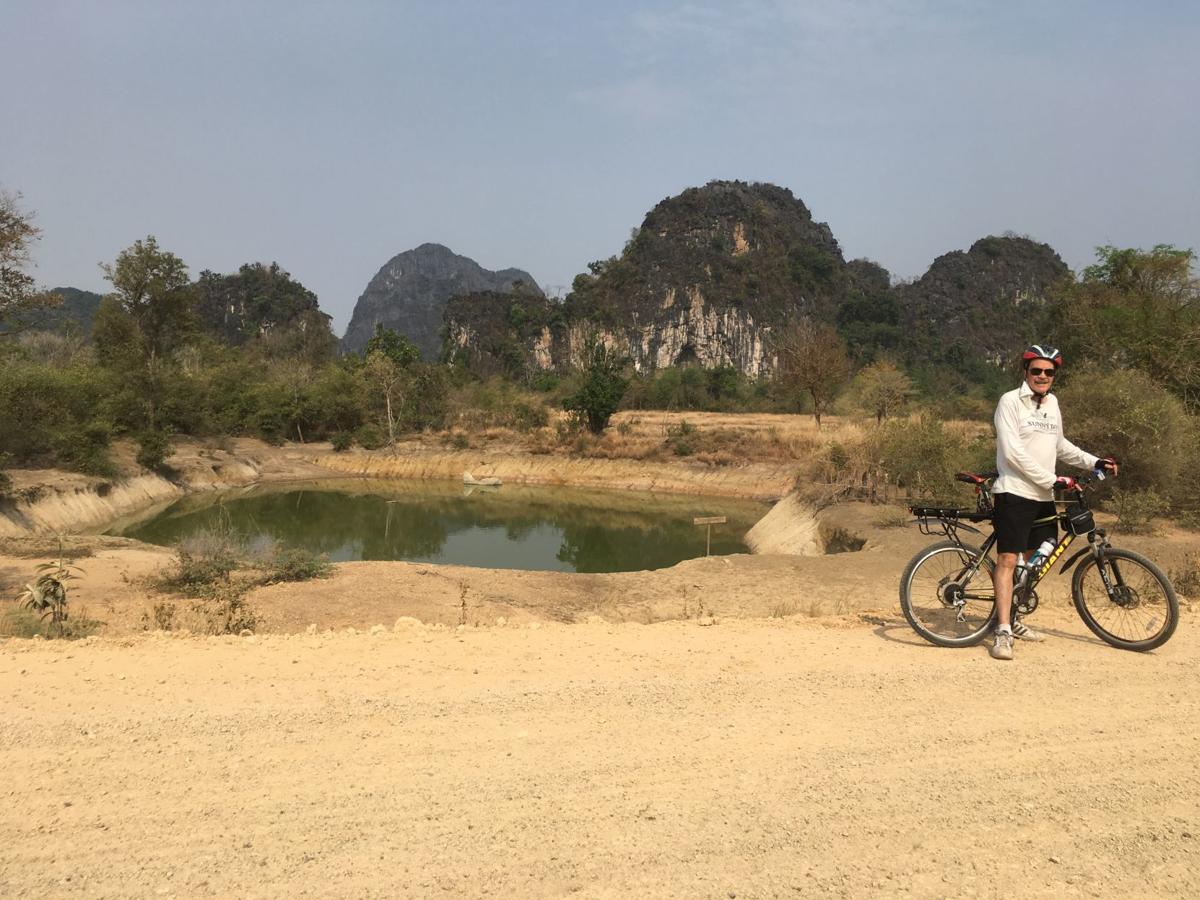 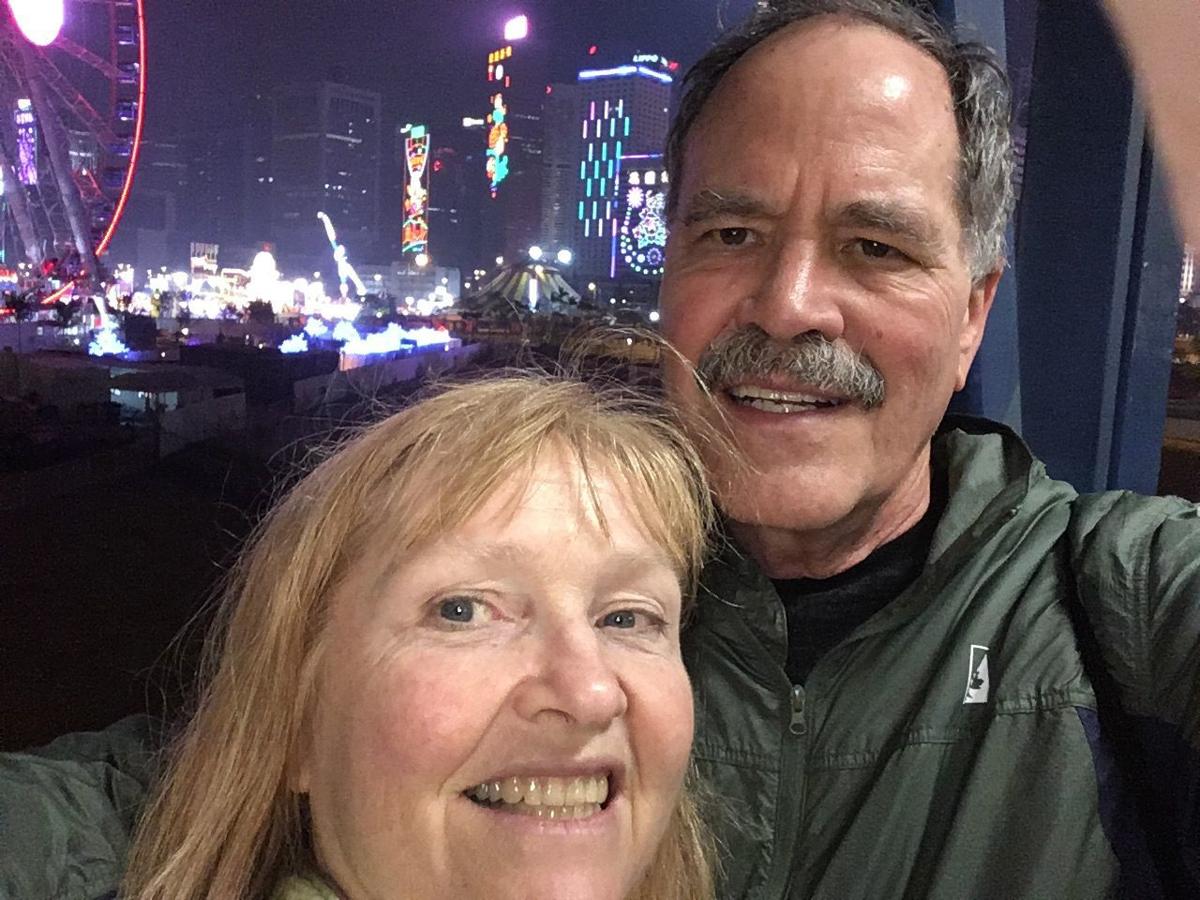 Janine Copple and Steve Larrick pose in Hong Kong at night. They used China as a jumping off point to do additional traveling during their winter school break. 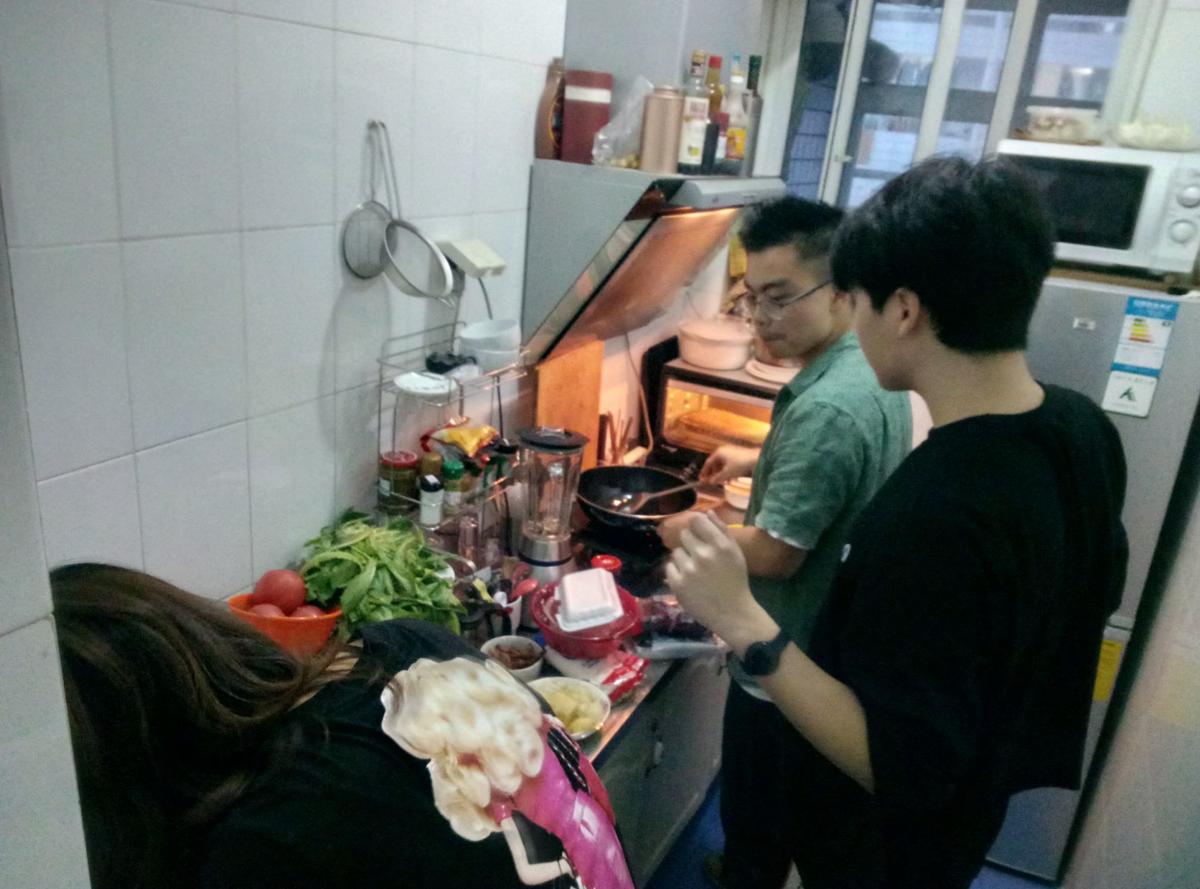 Students with the chosen English names of Sue, Ryan and Edward prepare dinner in Janine and Steve’s apartment kitchen on campus. Most students in Janine’s class adopted English names. 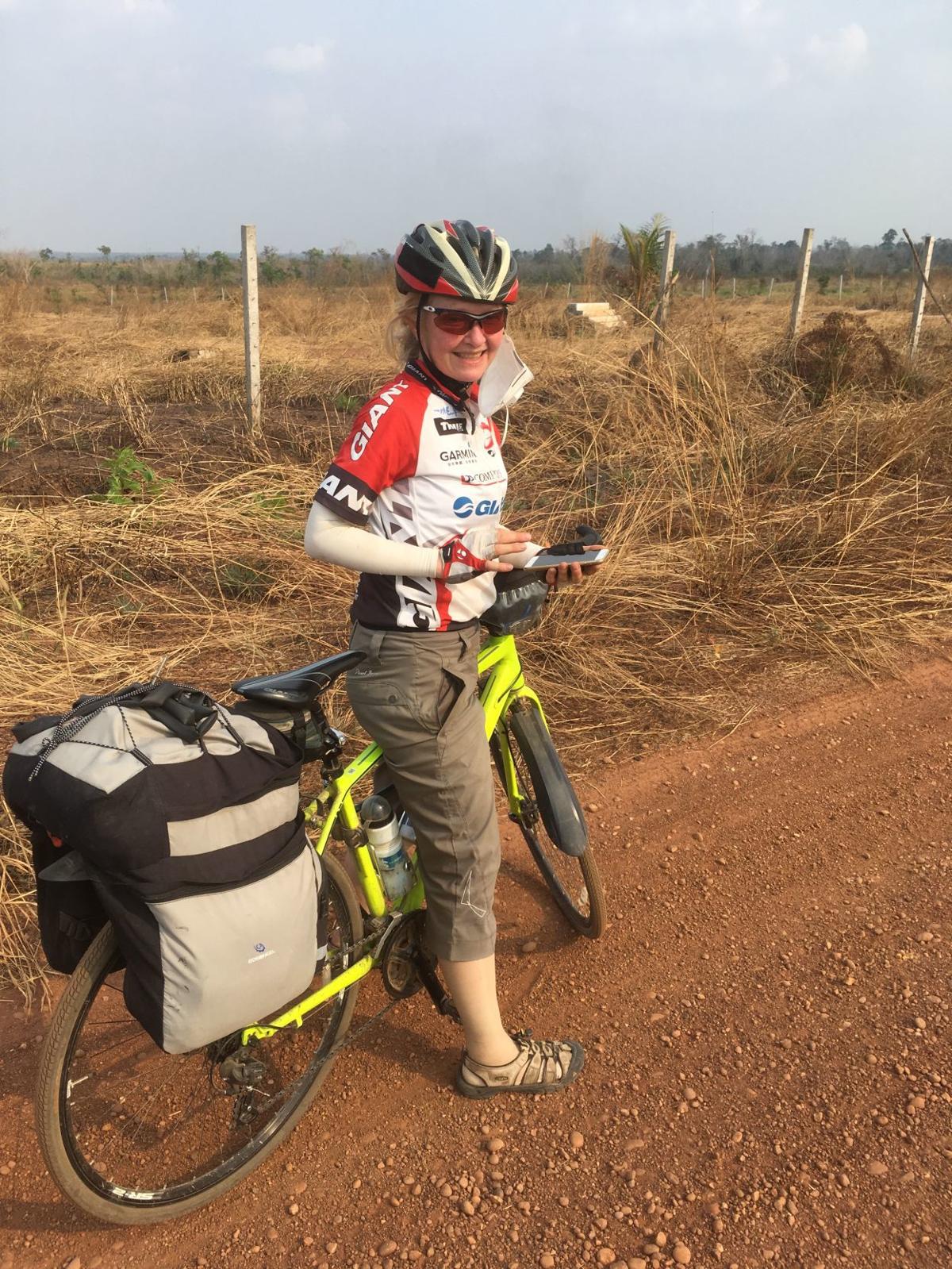 Lincoln couple Steve Larrick and Janine Copple’s journey to China was made possible because of training they received through Lincoln Literacy.

That training in teaching English as a second language prepared them for what became a multi-year commitment to teach oral English at China’s Zhoukou (Jo-ko) Normal University. Founded as a teaching university, many of the students go on to become teachers.

Steve headed overseas first in September of 2014 at the recommendation of Ron Kurtenbach, a founder of KZUM radio station who has taught in China after earning a Ph.D. in English in 2000 from the University of Nebraska-Lincoln.

Janine, a Spanish medical interpreter and independent contractor, returned to China with Steve for the 2016-2017 school year. She had been immersed in the Honduran culture in the ‘80s during a 3½ -year stint with the Peace Corps in Honduras when letters and expensive long-distance phone calls were the only way to keep in touch with friends and loved ones.

“It’s so different now,” she said. “You’re able to stay in contact with people at home with smart phones and e-mail.”

That included the couple’s one grown son, Antony, and Janine’s father. Antony accompanied Janine to China for a visit the first year Steve was overseas.

Both retired UNL personnel, Steve and Janine had taught college students, but the subject matter was quite different. Janine was an adjunct art professor whose emphasis was design and visual literacy. Steve spent 13 years as Community Development Coordinator for the College of Architecture, working with the Urban Community Improvement Program. He also taught a University Foundations course to orient incoming freshmen.

The cycling pair found bike share stations are making their way into the city of Zhoukou, much like the recent invasion to downtown Lincoln. The couple bought bikes in China and used them to engage some of their students outside of class and to promote their English speaking practice.

“Our main objective is to get them to speak and to understand us and improve their comprehension,” Janine said.

She and Steve each had their own approach with their 200-student load.

“I used phone apps, and they’d send me audio chats,” she said.

“I would talk to them about life in the U.S., try to find out how things are different and the same in the cultures,” he explained.

He said learning how his students thought helped him with cultural context. “A lot of it was a cultural exchange.”

In his film class Steve attempted to boost his students’ listening skills by showing films with subtitles. Janine also used media to enhance her students’ understanding and encouraged them to watch English language television shows, TED Talks and showed the movie “The Great Debaters.”

Janine explained that because China emphasizes rote learning and memorization, it’s hard for students to learn oral English. The language’s nonsensical phonetics don’t help much, either.

“Getting them to speak in class was like torture for them,” Janine said of her class of 25-30 students. She added that by the time students finish high school in China, no one is raising their hand or making eye contact. To give their students more opportunities to speak outside of class Steve and Janine invited them to their on-campus apartment for dinner.

Steve enjoyed witnessing the intergenerational interactions of Chinese grandparents and their grandchildren gathered outdoors in a circle in the courtyard near their faculty housing. Around the city he noted a lot of adult outdoor exercise areas, a kind of meeting place instead of coffee shops.

A few students became resources and helped Janine and Steve purchase items online that they couldn’t get in stores, like coffee beans. “Not speaking the language is tough, but people were always very interested in us and very kind,” Janine said.

Because the Western couple was such an anomaly, especially Janine with her blond hair and blue eyes, they drew attention. Janine and Steve were just as curious about their Asian hosts.

They learned that 25 percent of China’s population is Muslim. Also, they discovered that China is quite advanced in many ways. A high-speed train is coming to rural Zhoukou within the next year, for example. Paying for goods is as easy as scanning the QR code for your purchase and having it deducted from your account via an online app.

Traffic patterns are crazy with strollers, electric scooters, taxis, buses and cars weaving in and out, but Janine believes the drivers are very alert because they have to be. Chinese law states that if a car strikes anyone the driver is responsible for their medical expenses.

She soon adapted and averaged about 150 miles a week as she explored the villages outside of Zhoukou in the Henan Province. Her weekly blogs can be found online at bicyclincoln.org, with her last China cycling blog dated June 18.

Because of the poor air quality in China, Janine donned a mask for her daily rides. On a really bad day the Air Quality Index reached 500 in the city of nearly 3 million, she said. By comparison, in Lincoln a bad AQI reading is 16, she shared.

Working her way outside the city in concentric circles, Janine witnessed major demolition and reconstruction in progress. Small villages are being raised to make way for high-rise apartment complexes as the city of Zhoukou expands. From what she understands, Janine said landowners are given an apartment in exchange for the land grab.

Also on her tours, Janine noted the variety of crops and economics. She discovered that solar farms are gaining in popularity. With space being limited, one village erected solar pillars above its pond to make better use of space.

While Janine was touring the villages by bicycle, Steve spent his spare time grading written assignments, writing a journal and playing harmonica in a faculty band. He especially found it satisfying to learn more about Chinese culture, history and their way of thinking. He discovered that the ideas of Laozi, a Chinese philosopher from 6th Century B.C., are still prevalent.

Steve and Janine returned to the United States on July 3. Although they enjoyed the travel and cultural experiences they had, they don’t have plans to go back to the university. One highlight they will treasure is their 1,000-kilometer bike trip last winter along the Mekong River, flying into Bangkok and traveling through Laos, Cambodia and Vietnam.

The demand for highly qualified K-12 educators in STEM fields is growing more critical in high-need schools across Nebraska as well as the country.

Hundreds of fatty acids naturally occurring in plant oils, each bearing a similar chemical structure, were discovered and named by scientists …

Discussion and engagement in a growing number of topics for OLLI at UNL members doesn’t end with the last classroom session.

Steven and Janine at Vat Phou Ruin in Laos.

Students often joined Steve and Janine on bicycle adventures outside of the city to practice their English speaking skills. Masks help protect riders from the poor air quality. Pictured east of Zhoukou near the Shahe River are students whose chosen English names are Stephen, Christine, Sunshine and Christa.

Janine Copple and Steve Larrick pose in Hong Kong at night. They used China as a jumping off point to do additional traveling during their winter school break.

Students with the chosen English names of Sue, Ryan and Edward prepare dinner in Janine and Steve’s apartment kitchen on campus. Most students in Janine’s class adopted English names.