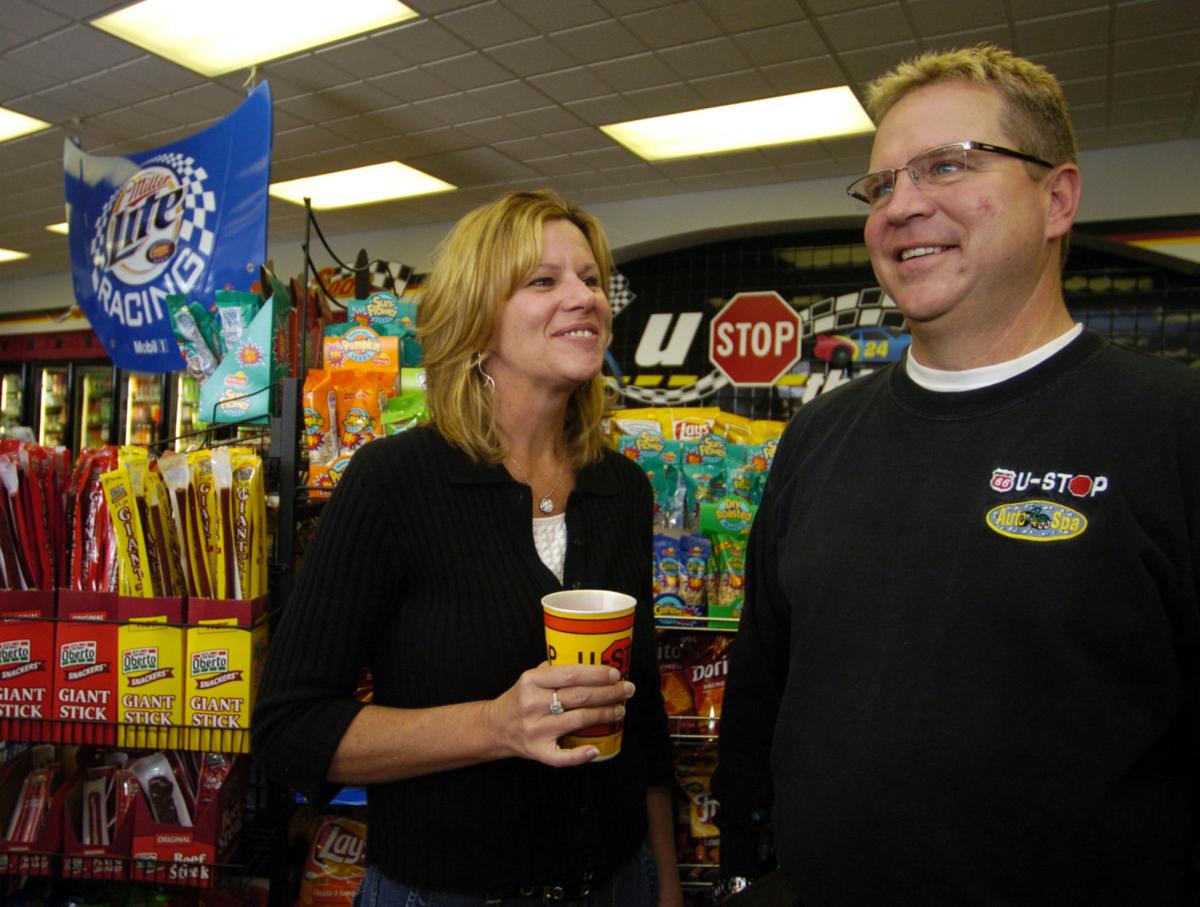 Wendi and Mick Mandl laugh in the U-Stop they owned at First and West O streets in this 2006 file photo. 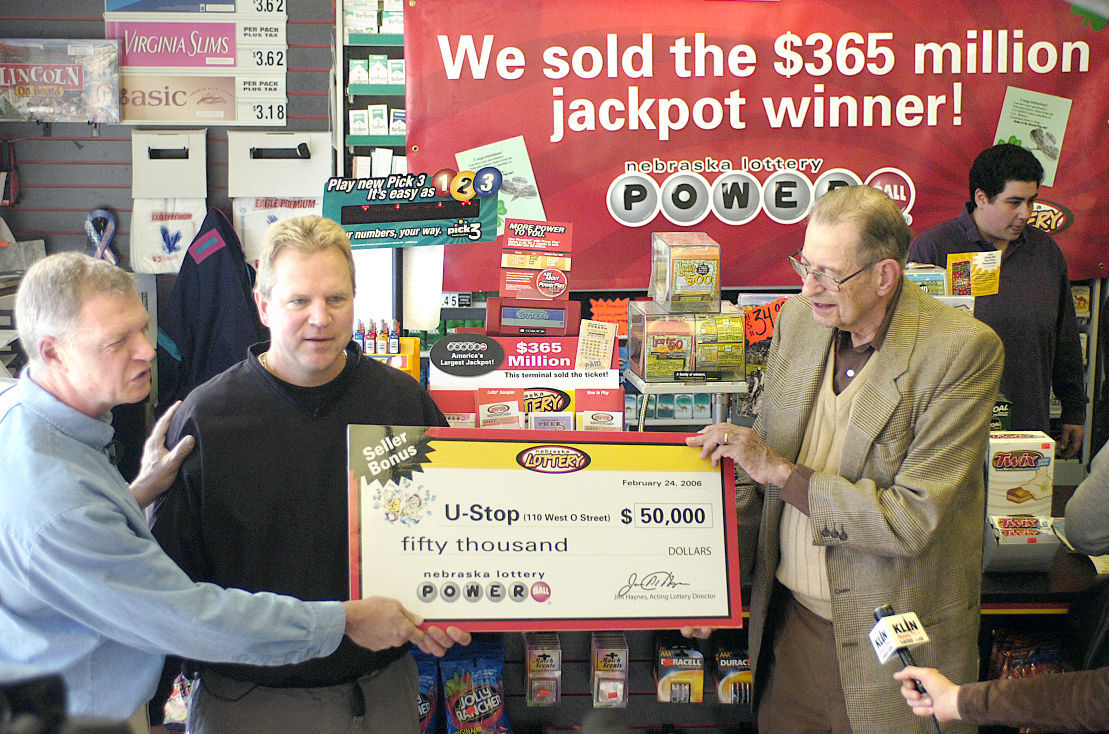 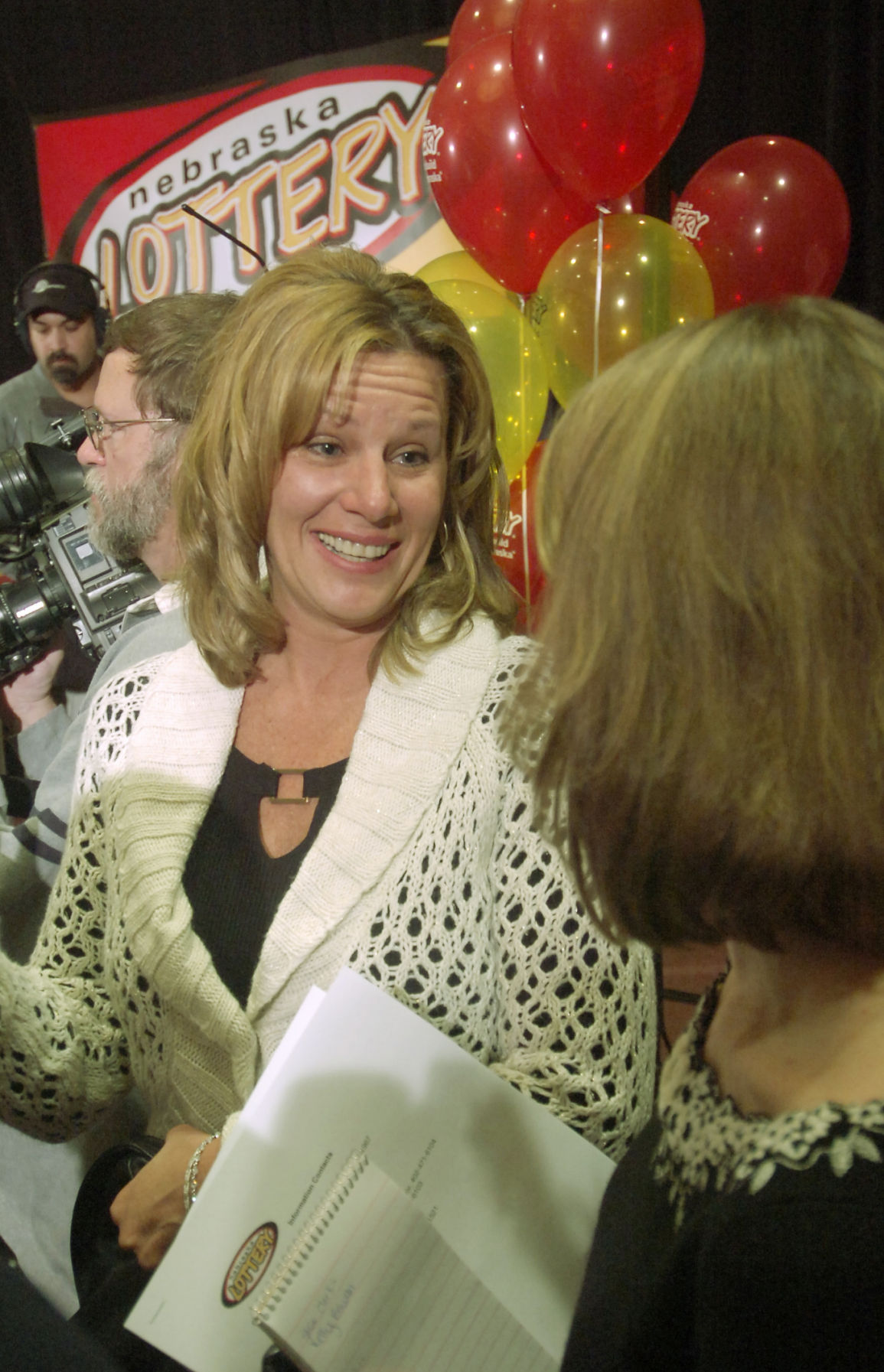 Wendi Mandl (center), who with her husband Mick owned the U-Stop convenience store where the winning Powerball ticket was sold, attended the winner's press conference at the Cornhusker Hotel in February 2006. 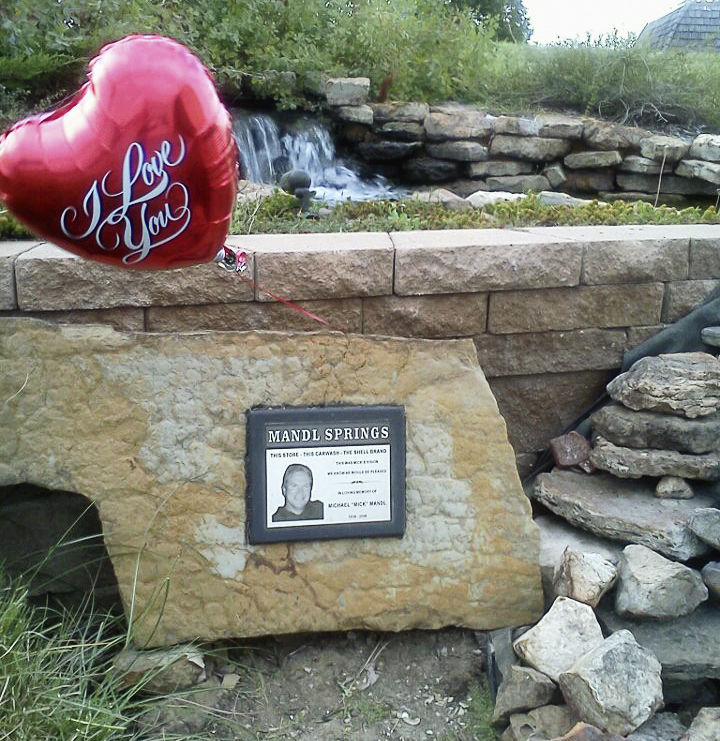 The U-Stop at 84th and Old Cheney has a memorial to Mick Mandl -- a stone cut in the shape of Nebraska, Mick’s face on a plaque in front of a waterfall. They called it “Mandl Springs.”

A voice on their answering machine woke Mick and Wendi Mandl that Sunday morning.

A clerk at one of their U-Stops was screaming, telling them things were crazy at the West O store -- national press, local reporters, gawkers.

CNN wanted to talk to them!

A Powerball ticket sold at their convenience store had turned eight Lincolnites into millionaires, a record $365 million. And for a few minutes, they thought they were millionaires, too.

Mick cut himself shaving in the excitement.

The couple knew that in some states, stores got 1 percent of winning tickets, and on the drive over they imagined ways they would spend their $3.65 million, not knowing Nebraska law capped the merchant’s cut at $50,000.

“Mick joked he was the most ungrateful $50,000 winner ever,” says Wendi, a first-grade teacher now one year from retirement.

But they were grinning that day in the photo, standing next to the Snickers display with a sign declaring: Welcome to U-Stop Home of the largest lottery payout in U.S. history! Go Huskers!!

And Mick made the most of their windfall and the publicity that came with eight plant workers -- regular customers -- sharing the millions they won on Feb. 18, 2006.

He bought a domain name and dreamed of selling hats and shirts on the website emblazoned with those words and a philosophy of feeling lucky 365 days a year.

The idea didn’t take off.

And by that summer, Mick, 48, felt his own luck start to run out.

Revenue was slipping at the five U-Stops he co-owned, and he owed the bank on a sixth still under construction. For months, he’d worried constantly about the city’s plans to close West O for bridge repairs and the lost revenue at his biggest store.

And it wasn’t just business. He’d lost both of his parents in the past two years and he missed them.

Costs for the house he had built for his family had tripled as he kept revising plans. The bank stopped lending him money.

He couldn’t sleep, and Wendi would turn to him at night and see him staring at the ceiling, his mind racing as he went over the numbers in his head.

Mick disappeared on a Wednesday in mid-September, seven months after the lucky Powerball.

That morning, he stopped and delivered paychecks to his five U-Stops; he wrote a check to Creighton University for his oldest son’s tuition, he paid rent through the end of the year on a storage unit.

Then he drove his red Chevy pickup 130 miles south. He had taken the gun he kept under the bed and had left a note under Wendi’s pillow.

She discovered the gun was missing long before authorities found his body the next afternoon in a wooded area near Louisville, Kansas.

She found the note, too, filled with love and regret.

Wendi worked Friday nights at the Harvester Restaurant & Lounge during college and Mick would stop in after work with coworkers from the Pepsi distributor, a business with a warehouse just down the street.

They went dancing on their first date. “We instantly fell in love.”

They were engaged after two months, married within a year. They became parents, first a daughter and then two sons, and Mick doted on all three.

The couple opened their first U-Stop at 56th and Holdrege streets with two other investors in 1993.

And he was a great boss, said Kelly Lance, Mick’s operations manager.

“He was definitely my mentor. He would never ask anyone to do anything he wouldn’t do himself.”

In seven years, Mick and Wendi had ownership in five stores and Mick spent his days making sure things were running smoothly, taking over shifts when someone quit or was sick, stocking shelves and repairing floor tile and cleaning toilets, wearing his trademark T-shirts and shorts, bringing his boys along to shadow him, spread thin but still smiling.

Later he called himself greedy, telling Wendi he should have been satisfied with just one.

But one store wasn’t Mick’s nature.

“He was an all-or-nothing kind of guy.”

When he played pitch, he loved to shoot the moon. When he drank beer with his buddies, he drank the good stuff.

When Pepsi had display contests for its route salesmen, Mick had to win. And he did.

When they stayed in hotels, Mick had to have a suite. When Corvette turned 50, he had to buy the anniversary edition, surprising Wendi with the cherry red sports car, tied up in a big bow.

Their $300,000 house tripled in cost to nearly $1 million because Mick wanted everything to be perfect, no matter how many times Wendi told him she didn’t need a fancy house.

It wasn’t about status for Mick, she says. He didn’t care about that. It was about living life to its fullest.

A childhood friend spoke at his celebration of life.

“Mick didn’t live a short life,” he said, “because he packed two days into every one.”

It made Wendi smile, and it was so true.

But looking back, she can accept that his drive and exuberance, his non-stop striving, sometimes went beyond the bonds of normal. The highs so high, the lows so low. Although to her it had just been “Mick being Mick.”

After he died, a counselor told her he’d probably been bipolar.

“The counselor said, ‘That was in Mick’s blood, you couldn’t do anything.’”

She didn’t contemplate suicide, she didn’t want to leave her kids, but she just couldn’t wait until her own death so she could be with Mick again.

She could feel a literal ache in her heart and all she wanted to do was sleep. Simple things like putting clean sheets on the bed took too much energy.

Mick had never talked about suicide, but he talked a lot about his failures, about feeling like he’d let Wendi and the kids down. How can you love me, he’d ask. I won’t blame you if you leave me.

Don’t be silly, Wendi would tell him and wrap him up in a hug. She encouraged him to declare bankruptcy. If he was too proud, they’d start over somewhere else.

He wouldn’t consider it.

After he was gone, she was diagnosed with PTSD, major depression, seasonal affective disorder.

It took years before she felt like she was going to be OK, longer still to be truly happy.

“I am no longer ashamed of my mental struggles but proud I sought help and overcame them.”

She learned it’s OK to ask for help, OK to get help, that anyone can fall under depression’s spell.

“Everyone thought Mick had it all, but when you’re suffering, all you can see and feel are dark clouds.”

Wendi knew her husband was suffering.

She just didn’t know how much.

The day Mick’s body was found in Kansas, she logged onto his email. A message had arrived that morning from a daily Christian meditation site that he subscribed to. The scripture for Sept. 14, 2006, was from Song of Solomon: Love is stronger than death...

The entire verse is inscribed on Mick’s mausoleum, the one she’ll one day share with him.

A few months after Mick died, police arrested a U-Stop employee and charged him with embezzlement, alleging he’d stolen tens of thousands from three stores Mick had owned, including the West O Street store.

Mick’s business partners took over the U-Stops. The store under construction at 84th and Old Cheney opened with a car wash and a new name and a memorial to the man with big dreams -- a stone cut in the shape of Nebraska, Mick’s face on a plaque in front of a waterfall. They called it “Mandl Springs.”

Wendi sold the home they’d built and bought a small townhouse in 2007, where she still lives. She has five grandchildren -- a sixth due in the spring -- and is engaged to a man who understands the place Mick holds in her heart.

It’s a new chapter, she says.

The Lincoln lottery winners -- christened the Lucky Eight by the media -- emerged with $15.5 million each after taxes.

Two of them stopped in at the store that first year, distributing $100 bills to employees and $40 to guests at the nearby People’s City Mission.

Mick had been glad for their good fortune.

It was a happy time, Wendi says.

“We went the day they were presented the check at The Cornhusker. Mick told their attorney, ‘All I want is a picture of all of us in front of the store, and I think they owe me a beer.’”

His widow doesn’t sounds bitter or wistful 10 years later, simply matter-of-fact when she says that time ran out before either of those things came to pass.

Jackpot winners: 'OK, this is for real'

The boring millionaire of south Lincoln

The millionaire is willing to talk about his fortune, and all of the money he hasn’t been blowing, but he has one condition.

Slideshow: Where are the Lucky Eight now?

See where the Lucky Eight Powerball winners are now, 10 years after winning the jackpot.

Nebraska has a new millionaire.

BELLEVUE — Officials say a Powerball ticket worth $1 million was sold in Bellevue.

Wendi and Mick Mandl laugh in the U-Stop they owned at First and West O streets in this 2006 file photo.

Wendi Mandl (center), who with her husband Mick owned the U-Stop convenience store where the winning Powerball ticket was sold, attended the winner's press conference at the Cornhusker Hotel in February 2006.

The U-Stop at 84th and Old Cheney has a memorial to Mick Mandl -- a stone cut in the shape of Nebraska, Mick’s face on a plaque in front of a waterfall. They called it “Mandl Springs.”