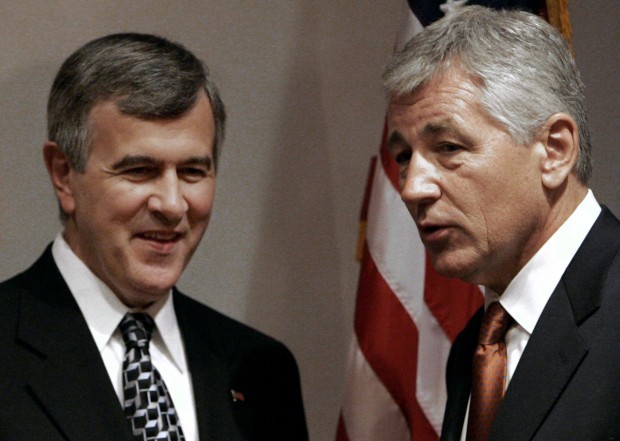 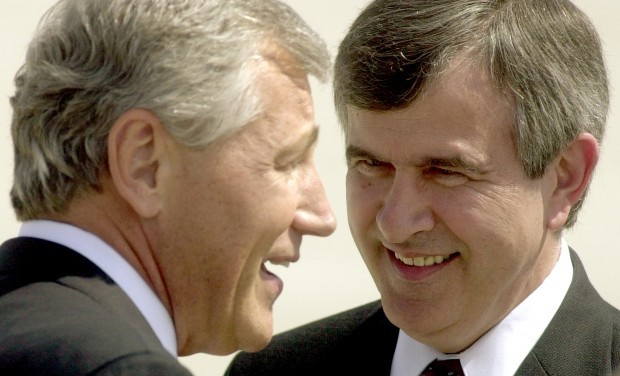 In this file photo from May 12, 2003, then-Gov. Mike Johanns talks with then-Sen. Chuck Hagel before the arrival of President George W. Bush in Omaha.

In the wake of Hagel's contentious confirmation hearing before the Senate Armed Services Committee on Thursday, the green light from Nebraska's senior Republican senator could be timely and pivotal in helping pave the way for additional Republican support in the Senate.

As Johanns noted in a telephone interview, he is the member of the Senate who knows Nebraska's former Republican senator best.

But, Johanns said, "do not think he got a pass from me because he's a friend."

Had Hagel not reassured him about his views on the Middle East, and in particular about "the important relationship between the United States and Israel," Johanns said, "I would have voted no."

Johanns said he received all the assurances he needed during a private one-hour meeting with Hagel that "he will stand side by side with our allies, be firm with our enemies and use good judgment" as secretary of defense.

"He was absolutely clear that he will be a strong defender of Israel, and that's very important to me," Johanns said.

"He was absolutely clear that he believes the use of force must remain on the table as an option against Iran, and that's the position we must maintain."

The only Republican senator who had endorsed Hagel prior to Saturday was Sen. Thad Cochran of Mississippi.

Johanns said Hagel is scheduled to make another round of private calls upon senators in their offices on Capitol Hill this coming week, and he's aware that includes a number of Republicans.

The committee is expected to send his nomination to the floor as early as late next week, probably without any Republican votes.

Johanns said he believes Hagel can acquire more than 60 votes for Senate confirmation if the nomination encounters a Republican filibuster, but he's beginning to think only a majority vote may be required. Republicans hold 45 of the 100 Senate seats.

In watching the confirmation hearing, Johanns said, he "felt most comfortable with (Hagel's) testimony when he acknowledged that, if given the opportunity, he would revise (some earlier policy) comments and more precisely state what he believes."

A senator has "a tremendous license to say what you want," Johanns said, and Hagel "sometimes was not very careful choosing his words" when he was a senator.

Hagel is "a powerful personality," Johanns said, but he understands he needs to be more cautious and precise in what he says as a member of the president's Cabinet.

Hagel would be a defense secretary uniquely committed to members of the military and veterans, Johanns said, having served as an Army sergeant in Vietnam where he was twice wounded in combat.

Sen. Deb Fischer, Nebraska's other Republican senator, has not yet announced whether she would support Hagel's confirmation. But she questioned him critically during Thursday's committee hearing.

"It's pretty obvious that the political knives were out for Chuck Hagel," Panetta told NBC's "Meet the Press."

Sen. Mitch McConnell is raising the possibility of a filibuster of the president's nomination of Chuck Hagel to be defense secretary. Sen. John McCain says he won't support a filibuster.

A bitterly divided Senate panel voted to approve the president's nomination of Chuck Hagel to be the nation's defense secretary at a time of turmoil for the military with looming budget cuts.

The Nebraska senator could have provided the 60th vote required to proceed to a vote on confirmation. "I don't consider this a filibuster," Fischer said in a telephone interview later.

Chuck Hagel, Nebraska's former Republican senator, appeared to have the support of Democratic members of the committee, but ran into a buzz saw of critical questioning from Republican senators, including Deb Fischer and John McCain.

Hagel burned in the hot seat: The Aggregator

Most national reviews on the Chuck Hagel hearing say he got burned in the hot seat before the Senate Armed Services Committee, but Hagel came out of the hearing with some mainstream media support.

In this file photo from May 12, 2003, then-Gov. Mike Johanns talks with then-Sen. Chuck Hagel before the arrival of President George W. Bush in Omaha.