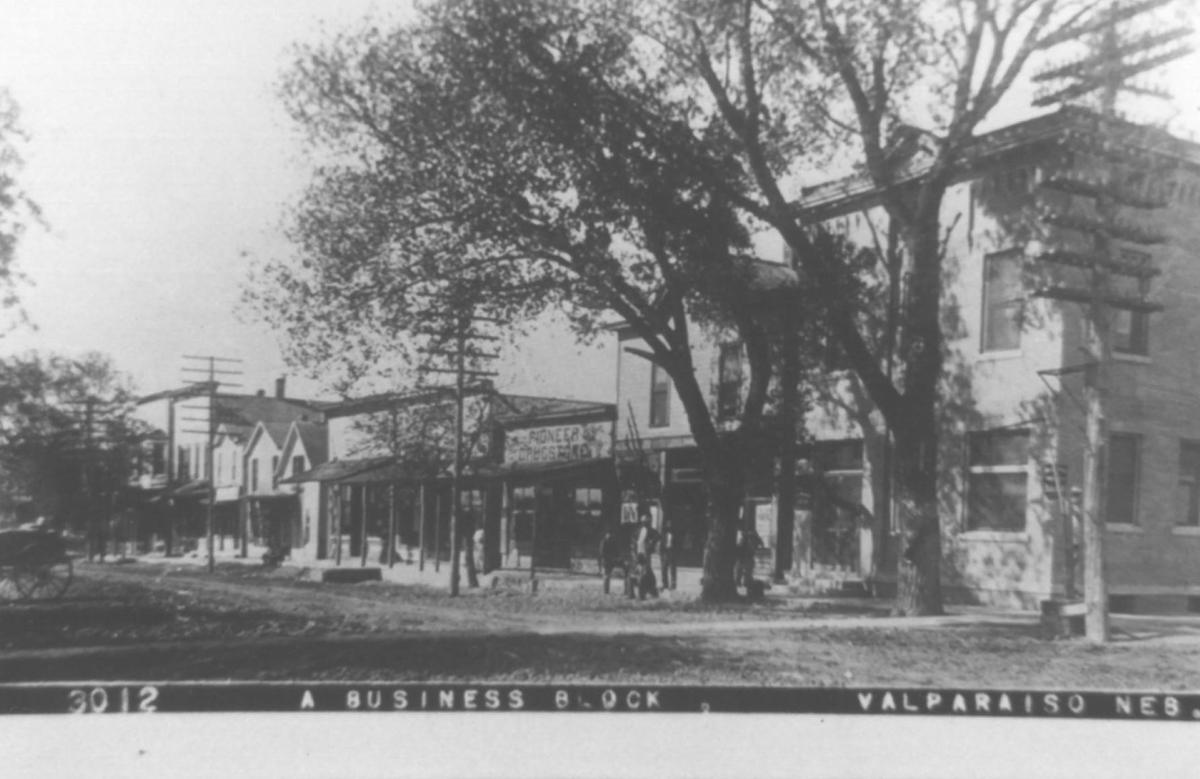 If you are the least bit intrigued by how a town gets its name, tangled by conflicting sources, look no further than Valparaiso just north of the Lancaster/Saunders County line. If you are a student of old maps you could be misled even into believing Valparaiso was the county seat of Calhoun County, which was named for a man in 1856 who was later connected to the Confederate States and renamed Saunders County in January of 1862.

Valparaiso was, however, most definitely the incubator for Lincoln’s Magee’s Clothing company and home of C.C. White, perhaps the largest flour mill operator in the state, while both families are well-known benefactors of Nebraska Wesleyan University.

The first mention of the name Valparaiso appeared on an 1863 Nebraska Territory map that indicated the city was the county seat of Calhoun County. Where Mr. Colton, the map’s printer, got this misinformation is a mystery, because even the county’s first post office, Headland, did not organize until 1868, by which time Calhoun had been renamed Saunders County. Another map published in 1865 notes that Valparaiso was on a wagon road to Plattsmouth when the entire county had a population of only 188.

One of the earliest, if not the first, settlers in what would become Oak Creek Precinct in Saunders County was Andrew Johnson, who arrived in Nebraska from Maine in October 1865 and homesteaded on Section 22. In order to build his home, noted as being the first in the area, Johnson hauled lumber from Rock Bluff and Nebraska City.

The following year Henry Throop arrived and settled on Section 34, C.C. “Charlie” White set up housekeeping in a dugout, and Rodney Knox Johnson homesteaded adjacent to the later site of Valparaiso.

On Sept. 27, 1871, Andrew Johnson established a post office at his home with himself as postmaster. The name of Valparaiso for the post office was supposedly invented by Johnson as being situated in a vale of paradise, though the name had obviously been associated with the area long before. There is also some evidence the Johnson homestead was at a point locally called Raccoon Forks, because the East Raccoon Creek and West Raccoon Creek merged there and became North Oak Creek.

To even further complicate the village’s original name, the Wahoo Independent noted, in 1877, that the village had once been named Eddy for Col. J.H. Eddy, while Andrew Johnson’s son C.T. Johnson emphatically riposted, “it was never named Eddy.”

In 1868, Rodney Johnson built the first schoolhouse and subsequently, perhaps a year later, opened a general store, though others point out that the store was outside the later plat of Valparaiso and that the first storefront was actually built by Simon Kelley from Lincoln, who laid some boards “over a few kegs of beer while he built a saloon.”

At an unspecified date Andrew Johnson bought James Craig’s land, which meant that he then owned the entire site of what he platted as Valparaiso. The original 13-square-block plat was located at the junction of Sections 22 and 23 with First Street as a north boundary, Fifth Street on the south with north/south streets named Spruce, Oak and Pine.

In 1876-77 Andrew Johnson gave the railroad 80 acres of land at Valparaiso to prevent the depot and siding from being built 2½ miles north of Touhy on the Hurly farm. The Union Pacific’s Omaha & Republican Valley Railroad then built three branches, the Valparaiso, Wahoo & Valley branch, Valparaiso & Manhattan branch and Valparaiso, Central City branch, which all met at Valparaiso with a central depot between Second and Third streets on Pine Street.

With the railroad’s arrival, a central shipping point for the region was created and that year “30 cars of grain and 70 cars of livestock were shipped from Valparaiso.” Rodney Johnson immediately built a third, larger iteration of his general store, Charles J. McFarland built a hotel and C.C. White opened a lumberyard and major flour mill on Oak Creek. Within a year the population reached 100, and the city reported having a barber, R.K. Johnson’s bank, a harness/shoemaker, two blacksmiths, a general store, drug/paint store, two hardware dealers, a wagon maker, Methodist and Christian churches, hotel and saloon.

In July 1880, Valparaiso was incorporated, and two years later, the population was estimated at 350. Today Valparaiso, whose population peaked at 614 in 1900, has 562 residents. The village on Nebraska 79, less than 20 miles from Lincoln, still prospers, although like many communities, it waned as the railroad left and is perhaps today mostly remembered for its former citizens C.C. White, Nellie Throop Magee and her husband, Oliver Magee, all of whom were important to Lincoln, Lancaster County and their combined interests in Nebraska Wesleyan University.

LPS calls off school for next three Fridays amid staffing crisis

Classes will be out Jan. 21, Jan. 28 and Feb. 4 so teachers can work on lesson plans and help catch up quarantined students who've missed instruction.

Deputy County Attorney Matt Mellor said Travis Warnsing had been only out of prison for a little more than a month for sexually assaulting a child when he got caught trying to meet an underage girl for sex.

Authorities responded after the woman called authorities and said "someone needed to check if her heart was beating." First responders found a 5-year-old girl with blood on her clothes and face, according to the sheriff's office.

Witnesses told police the teen drove his red Ford Escort through the restaurant's drive-thru, shouting and yelling at his 15-year-old ex-girlfriend, before entering the business where she worked.

At about 2 a.m. Friday, a fight at a residence in the 1700 block of N. 26th St. resulted in the victim suffering a broken orbital bone, LPD Capt. Duane Winkler said.

45-year-old Michael McClintock of Pawnee City was killed in the crash. Two others are in critical condition.

Officer Erin Spilker's civil suit against the city includes more than 30 pages of detailed allegations, ranging from LPD's handling of alleged sex assaults by male officers to inappropriate discipline focused on women who have come forward.

"He’d always sit on the porch and holler racial slurs, all the time, towards me, towards the neighbors, even towards people walking down the street,” one of the vicitms testified at trial.

A black sedan traveling at a high rate of speed struck an SUV, then collided into a Mexican restaurant, before the 16-year-old and an occupant fled the scene, according to police.