Jim McKee: The rise and demise of Lincoln-owned department stores
0 Comments
Share this
1 of 2 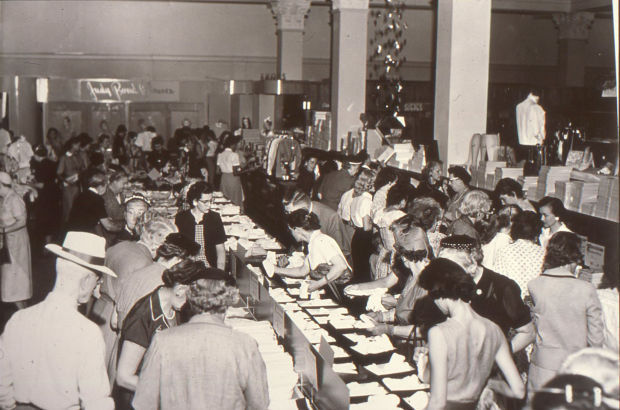 Most of us have an instant memory of Lincoln’s downtown and its department stores and realize that, for all intents and purposes, they no longer exist. Exactly what defined them or what happened to them is harder to determine.

Two department stores, both in England, not only both claim to be the first of their description but are both, amazingly and against all odds, still in business; Benetts in Derby opened in 1734, followed by Kendal’s in 1796.

Perhaps the first department store in the United States was A.T. Stewart’s Marble Palace, which opened in 1846 in New York City, offering a wide variety of merchandise at fixed prices with “free entrance to all customers.”

Each of us probably has our own definition of a department store. To me, there must be many departments, multiple brands and suppliers, many fixed price points in vast, open, uncluttered spaces with tall ceilings -- at least on the ground floor and in a high-rise building. To those basics I would add outside display windows, floor walkers, a unified dress code for clerks, a bargain basement and such categories as bridal consultants, furniture, optometrists, jewelry repair, a post office, bakery and books.

In Lincoln, I fondly recall white-gloved elevator operators, a huge ladies lounge with an attendant, savings stamps and charge-a-plates. To  qualify for the uppermost tier of departments stores, it also was necessary to offer a cafeteria like Gold’s or a tearoom like Miller & Paine.

Miller & Paine even went a step beyond this by not only having two tearooms -- one in the basement and the other on the fifth floor -- but also owning a farm near Emerald to supply poultry, vegetables and eggs and  directly importing its own sharp English cheddar cheese for the macaroni and cheese as well as cinnamon for its cinnamon rolls. Gold’s sported an auditorium with lectures and programs and an auto store as well as a garden/farm store.

To identify Lincoln’s first department store is difficult as Herpolsheimer's and Miller & Paine both opened in 1880.

Henry Herpolsheimer arrived from Michigan and partnered with Otto Mohrenstecher in the Cash Dry Goods House at 1109 O St. in 1880. A decade later, having bought out his partner, Herpolsheimer bought several small businesses and houses, then built his 73,000-square-foot store on the southwest corner of 12th and N streets. Known variously as The Exposition Store, The Glass Block and The Daylight Store, reportedly it was one of the largest department stores west of the Missouri River and even boasted its own electric generating plant in the basement.

The Great Depression closed Herpolsheimer’s in May 1931, leaving 200 employees out of work. Two walls and the basement stood as the Firestone tire store until 1998, when its current store was built on the site.

In 1879, J.W. Winger wrote J.E. Miller in Pennsylvania and urged him to come to Lincoln. Miller arrived the following year and went to work in the frame store at 1010 P St. Winger  built a new, bigger store on O Street the following year, but before he could move in, he leased it to Henry Herpolsheimer. Miller bought out Winger and, in 1889, partnered with Dr. Bartlett Paine to build the complex on the southwest corner of 13th and O streets through the years.

Charles Rudge moved from Youngstown, Ohio, in 1880. Soon Rudge & Guenzel operated out of several adjacent O Street addresses, including the old FitzGerald Dry Goods Store, before building its twin stores on N Street and ultimately the multifloored department store on the northwest corner of 13th and N as “one of Nebraska’s largest retailers.”

The Great Depression brought the sale of the store to Allied Stores in 1929, but it continued to operate under the old name until 1941. The half-square-block building is now an office complex.

William Gold sold his Sutton clothing store and moved to Lincoln in 1902, where it became Cohen & Gold at 112 N. 10th St. After buying the old Rudge & Guenzel building on O Street, Gold’s continued to expand, ultimately covering nearly three-quarters of the block and the entire block of parking to the south. In 1964, Gold’s sold to J.L. Brandeis of Omaha, which, in turn sold to Younkers of Des Moines, closing the downtown Lincoln store in 1981.

In 1923, J.C. Nichols began construction of Kansas City’s Country Club Plaza, which signaled the beginning of shopping centers out of traditional downtown settings. The Depression  ushered in chains, such as Sears Roebuck, Montgomery Ward and J.C.Penny. By the 1960s, downtowns and old-style department stores were fading; in Lincoln, Gateway Shopping Center had been built east of the city.