Meat Loaf, 'Bat Out of Hell' rock superstar, dies at 74

Jim McKee: The Fontenelle Hotel, an Omaha architectural gem
0 Comments
Share this
1 of 2 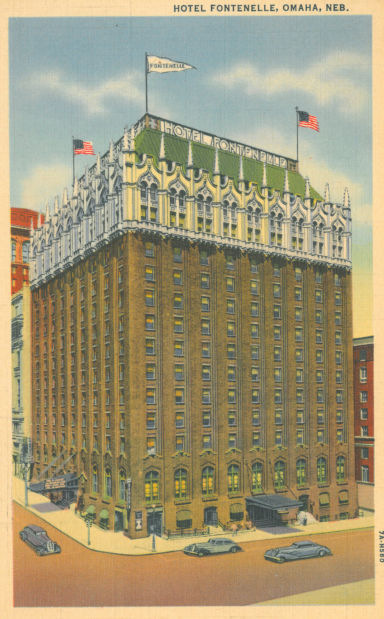 This hand-colored postcard of Omaha’s Hotel Fontenelle shows the building at the height of its life. The million-dollar, Thomas Kimball-designed building was remodeled in the 1950s as the Sheraton Fontenelle and, though structurally sound, closed in 1971 when further renovations proved uneconomical. It was razed in 1983.

From its first year in existence, Omaha’s need for first-class hotel accommodations has been answered by community entrepreneurs and business leaders. One of the most impressive was the Fontenelle Hotel which, though it operated for only 56 years and stood for 68 years, remains an icon of community service and a lost architectural landmark.

During the years 1910 to 1912, Omaha retailing giant Arthur Brandeis became aware of the need for a first-class hotel as the city’s population topped 124,000. In 1912, Brandeis and John L. Kennedy donated a quarter of a square block on the northwest corner of 18th and Douglas streets for the proposed project. Few requirements were stipulated, but Brandeis made it clear that a $1 million hotel was what he had in mind.

Gurdon Wattles, already a successful Omaha businessman, was exposed to an idea of William Jennings Bryan’s, who proposed that Nebraska put together an exposition similar to the Chicago World’s Fair. That would, in part, help offset the current recession and also boost the state as an industrial presence. Wattles was elected president of the Transmississippi Exposition Co., which was to sponsor the very successful yearlong fair. In an unrelated event, in 1905 Wattles bought an undeveloped 90-acre tract in California and built a summer home in what would develop as Hollywood.

On Jan. 2, 1913, the Douglas Hotel Co. was incorporated with Wattles as president. Wattles proposed financing the “first-class, 16-story hotel” by selling $500,000 of stock that would carry 6 percent interest. “After a few years” the stockholders would then be allowed to cash in their stock at a 25 percent profit. Additional financing came from a $400,000 loan from Metropolitan Life Insurance Co. and $100,000 from other sources. Initial estimates projected an 11-story building, with the balance of the $1 million used for furniture and fixtures.

Thomas R. Kimball, son of Thomas Lord Kimball, who was vice president of the Union Pacific Railroad, began his career as an architect in Omaha in 1891. As general architect for the Transmississippi Exposition, Kimball became closely associated with Wattles. When he was president of the American Institute of Architects, Kimball also gained notoriety when he was chosen to design the competition that ultimately chose Bertram Grosvenor Goodhue to be the architect for Nebraska’s third, present State Capitol. In 1913, Kimball was chosen to design the Douglas Hotel Co.’s yet-to-be-named Omaha hotel.

On Feb. 14, 1914, a contract to build the Fontenelle Hotel, named for Omaha Chief Logan Fontenelle, was issued. The construction bid for the $1 million project was won by Seldon Breck Co., whose quote was a scant $1,200 below that of the J.C. Mardis Co. Described as late gothic revival, the hotel was said to be reminiscent of Cass Gilbert’s Woolworth Building. The Fontenelle was noted as being 16 stories, plus basement, plus subbasement and 132 by 154 feet, 175 feet tall, of brick and terra cotta with floors of hollow tile and a concrete reinforced roof covered with copper. The top three floors were of white terra cotta designed to resemble Chief Fontenelle’s headdress with the roof topped with signs facing Douglas and 18th streets made of individual letters 5 feet, 8 inches tall. The 330- or 350-room hotel featured marble floors, solid mahogany doors and trim, with a 500-seat function/ballroom that had five crystal chandeliers. Special features, which set the Fontenelle apart from other hotels in the city, included five traction-electric elevators, sample rooms for traveling salesmen, telephones and bathrooms in each suite and key chutes to return keys to the main desk.

The Fontenelle was leased to the Nebraska Hotel Co. for 20 years and opened officially Feb. 15, 1915, with a 1,000-person banquet with Gurdon Wattles as toastmaster. Although the Fontenelle opened with great fanfare and promise, the Nebraska Hotel Co., its management contractor, failed just five years into its 20-year agreement. The new operator was Eugene Eppley, who even moved into the hotel, and by the 1950s his chain was considered the largest private hotel company in the world.

Over the years, many dignitaries and at least two U.S. presidents stayed at the Fontenelle. On Oct. 29, 1912, Willa Cather spent the night while speaking at the Omaha Fine Arts Society and explained she currently was working on "One of Ours," which would win the Pulitzer Prize the following year. One of their meeting rooms also served for interviews with her by the Omaha World Herald, Omaha Bee and the Omaha Daily News.

In 1956, the Fontenelle was sold for $30 million, becoming the Sheraton Fontenelle. Advertisements then claimed that not only were there three floors of function rooms, but all rooms were air-conditioned, had private bathrooms, TV and radio, but there  also were five restaurants: The Burgundy Room, Indian Grill, Bombay Room, King Cole Room and Black Mirror.

On Feb. 28, 1971, shortly after the new Hilton Hotel opened its doors, the Fontenelle closed. As the hotel sat empty, a number of proposals was floated to renovate it, but ultimately, in the spring of 1983, the once proud Fontenelle was razed … for a parking lot.

This hand-colored postcard of Omaha’s Hotel Fontenelle shows the building at the height of its life. The million-dollar, Thomas Kimball-designed building was remodeled in the 1950s as the Sheraton Fontenelle and, though structurally sound, closed in 1971 when further renovations proved uneconomical. It was razed in 1983.