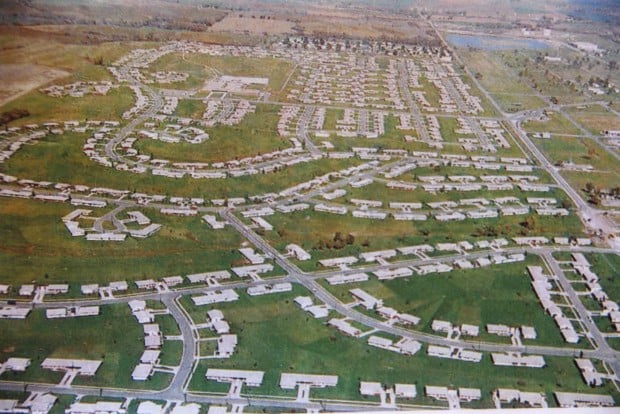 This air view, looking north, shows Arnold Heights and, at the upper right, the more uniform, straight-street area of Huskerville. Both now are part of Lincoln Housing Authority properties, with many homes owned individually. 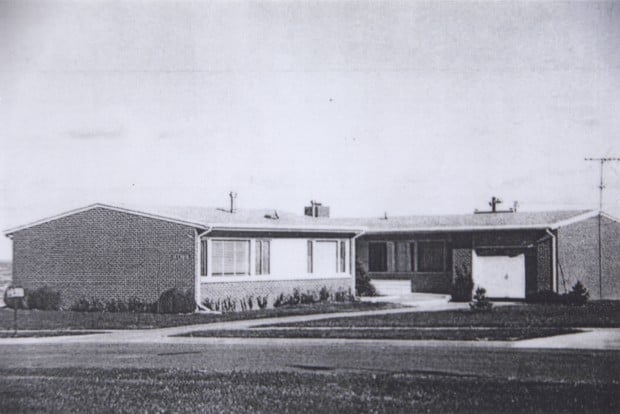 One of the Huskerville homes is shown in detail.

It’s known by many names -- Huskerville, Arnold Heights and Air Park -- but its history as a suburb is sketchy in most Lincolnites’ minds.

Beginning in 1927, the Lincoln Chamber of Commerce began lobbying and working for a city airport. Initially,  seven sites were examined -- three near Havelock, three northwest of Lincoln and one northeast of College View near 75th and South streets. The potential field was reduced to three, and options were tendered for “Paige Field” south of Lincoln, one of the north sites near Havelock and one north of Capital Beach Lake.

Ultimately, in April 1928, Lincoln voters approved  the concept, and 160 acres north of Capital Beach were purchased at $275 an acre. The same year, voters approved a $100,000 bond issue that gave the go-ahead to build an airport, and United Air Lines made its first flight into the city.

In 1929, the first airmail service arrived, and the following year the airport officially opened as Lindbergh Field, although the name proved short-lived, as it was discovered the name already existed on an airport in California.

In the early 1930s, a major tenant of the airport arrived when the former Lincoln Automobile and Tractor School became the Lincoln Flying School and built a large hangar near the administration building.

On Aug. 10, 1941, the U.S. Army Air Corps made a “secret survey” of the Lincoln airport, which was followed by a more detailed examination of the area in January 1942 by the U.S. Army Corps of Engineers.

The following month it was announced that Lincoln would become one of 12 Army Air Corps bases to be located in Nebraska, with the Lincoln location designated as a mechanics school. Less than a week after the announcement, Lt. Perly Lewis, an engineer with the Santa Fe Railroad, arrived. Almost immediately, the site was expanded to 2,750 acres.

On May 16, 1942, actual construction began on the base, including a nondenominational chapel, known officially as Building 2282, at Ninth Street and F Avenue, today’s 4601 N.W. 48th St.

Although the first contingent of 5,000 troops arrived in June to begin training as mechanics, construction was not finished until Sept. 1, by which time 1,070 buildings and four runways -- the longest one 7,000 feet -- had been completed at a cost of $19.9 million. Lincoln Army Airfield was dedicated Oct. 4, 1942, and locals were allowed to inspect the facilities.

When Lincoln Army Airfield was officially closed on Dec. 15, 1954, 30,000 aircraft mechanics had been trained and more than 40,000 other servicemen had been processed. All of the buildings, including hangars, barracks, houses, a bank, shops, post office, library, school, hospital, fire station and the runways reverted to the city of Lincoln.

When the airbase was reactivated for the Korean War as the Lincoln Air Force Base, the Air Guard was relocated, the municipal air terminal moved and Union Airport expanded for private aircraft. The Air Force razed the eastern portion of Huskerville, straightened Oak Creek and extended the long runway to 10,600 feet under a new 25-year lease -- later extended to 99 years -- to the Defense Department.

Lincoln Air Force Base closed June 25, 1966. That  meant the Air National Guard moved back, and the area was annexed by the city. The Lincoln Housing Authority  was created, and it acquired the houses in 1970, renaming the area Arnold Heights in 1971.

About half the houses were sold, and the rest still are rented as two-, three- and four-bedroom houses or duplexes for $405 to $640. In general, the northern area is still referred to as Huskerville, the central section as Arnold Heights and a newer, private, southern portion as Oak Hills.

The obvious extant remnants of the old airbase include several large hangars, aprons and runways as well as the original 1942 chapel, which was placed on the National Register of Historic Places in 1993.

Jim McKee seems to know everything, from the history of the Kennard House to the fact that Waverly doesn’t know how to spell its own name.

This air view, looking north, shows Arnold Heights and, at the upper right, the more uniform, straight-street area of Huskerville. Both now are part of Lincoln Housing Authority properties, with many homes owned individually.

One of the Huskerville homes is shown in detail.