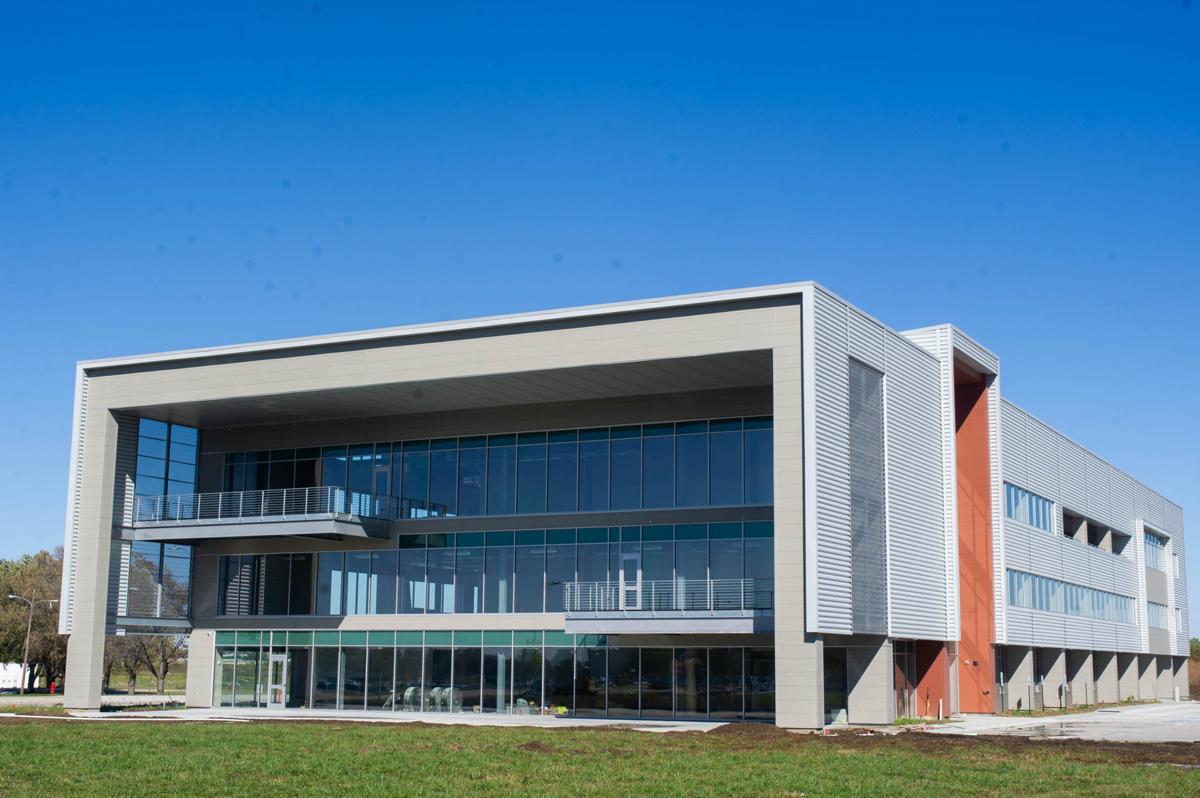 The Rise Building near 21st Street and Transformation Drive is 80,000 square feet of bright and modern potential that campus officials hope attract rising businesses to the up-and-coming research park. 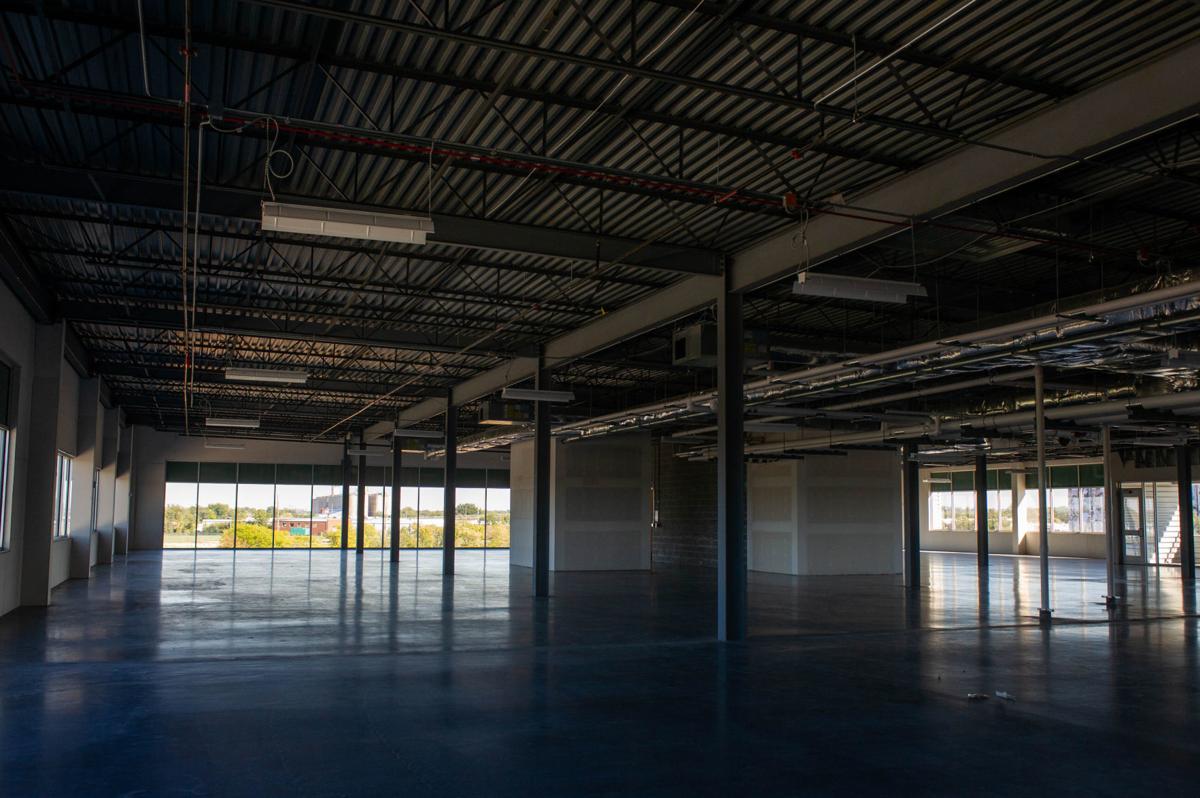 The third floor of the Rise building on the Nebraska Innovation Campus on Monday.

In a former life, the site of Nebraska Innovation Campus’ newest building was a copse of trees and vendor stalls near the eastern edge of the midway of State Fair Park.

Modeled on tech company headquarters in San Francisco and Montreal, the Rise is the “first building built 100 percent on spec” at Innovation Campus, according to Dan Duncan, the campus’ executive director.

Major construction on the $15.3 million project concluded this summer, at least to the extent envisioned by officials at Innovation Campus and Tetrad Property Group, the building’s developer and owner.

“What we wanted this building to do is give companies options,” Duncan said.

That means companies who lease space in the Rise will have a lot of say in what their workspaces look like and how they function, Duncan added: “It’s pretty unique for Lincoln, Nebraska.”

Let’s start on the first floor, where work continues on either side of a hallway bisecting the length of the Rise, new spaces for existing Innovation Campus tenants who outgrew their previous homes.

To the south of the hallway is an area Innovation Campus officials refer to as The Hub, 2,000-square feet of various-sized offices that share conference rooms, kitchen and dining areas, as well as space designed to foster collaboration.

“A lot of companies need to start small with just a single office,” Duncan said. “They have no problem sharing amenities with other companies because essentially they just need to have a door and a mailing address.”

The Nebraska Safety Center, which began at the University of Nebraska at Kearney in 1978, expects to relocate its office to The Hub by the end of the year, advance manager Bill Bivin said, after outgrowing its current space across the street in the Innovation Commons building.

“Right now, when we want to hold a training event, we have to partner with a hotel, or rent room somewhere,” Bivin said. “Now, we’ll have a small facility that will probably seat 25 people and a little classroom right in our office.”

The center, which conducts training classes for transit drivers, STOP classes and other safety instruction courses opened a Lincoln office at Fuse Coworking in the Haymarket in 2014 before relocating to the Innovation Campus in 2016.

“They outgrew their first space and needed more, so this going to work out nicely for them,” Duncan said.

Across the hall from The Hub is the new headquarters of Virtual Incision, a startup company founded by a pair of university professors — UNL’s Shane Farritor and UNMC’s Dr. Dmitry Oleynikov — in 2006, which like the Nebraska Safety Center outgrew a series of small offices is currently occupies elsewhere on the campus.

Virtual Incision, which opened an office at Innovation Campus in 2015, will expand across the northern half of the first floor of the Rise in space built for prototyping and assembling its robot-assisted surgical equipment.

Visitors to the Rise, or curious coworkers exploring the building, will be treated to a first floor hallway window looking into a demonstration operating room where Virtual Incision can put its technology on display.

Meanwhile, the second and third floors remain cavernous shells, ready to be customized to a tenant’s needs, Duncan said.

While lease agreements are in place for the entire third floor, Innovation Campus said it won’t begin work — or identify the companies locating there — until contracts are signed.

Recruitment to bring business to the second floor, which has identical features as the third, including panoramic views of the 250 acres along Salt Creek, as well as the “Elevate” art installation hanging on a nearby grain elevator, continues as well.

Duncan said he expects to have the space leased soon, and for the Rise to be 100 percent occupied by the end of 2019.

NU health insurance premiums will go down next year

Voters across eastern Nebraska will choose who they want to represent them on the University of Nebraska Board of Regents in next month's election.

'Citizen science' at the heart of UNL talk

The University of Nebraska-Lincoln Honors Program and its students are moving to a new home in the fall of 2019.

What do you get when you combine worship, event and co-working space all into one?

Leases are still being negotiated for office space in the Rise Building at Nebraska Innovation Campus, but developers have signaled their inte…

Adjuvance Technologies, a biopharmaceutical company based at Nebraska Innovation Campus, has received a contract from the government to work o…

The Rise Building near 21st Street and Transformation Drive is 80,000 square feet of bright and modern potential that campus officials hope attract rising businesses to the up-and-coming research park.

The third floor of the Rise building on the Nebraska Innovation Campus on Monday.