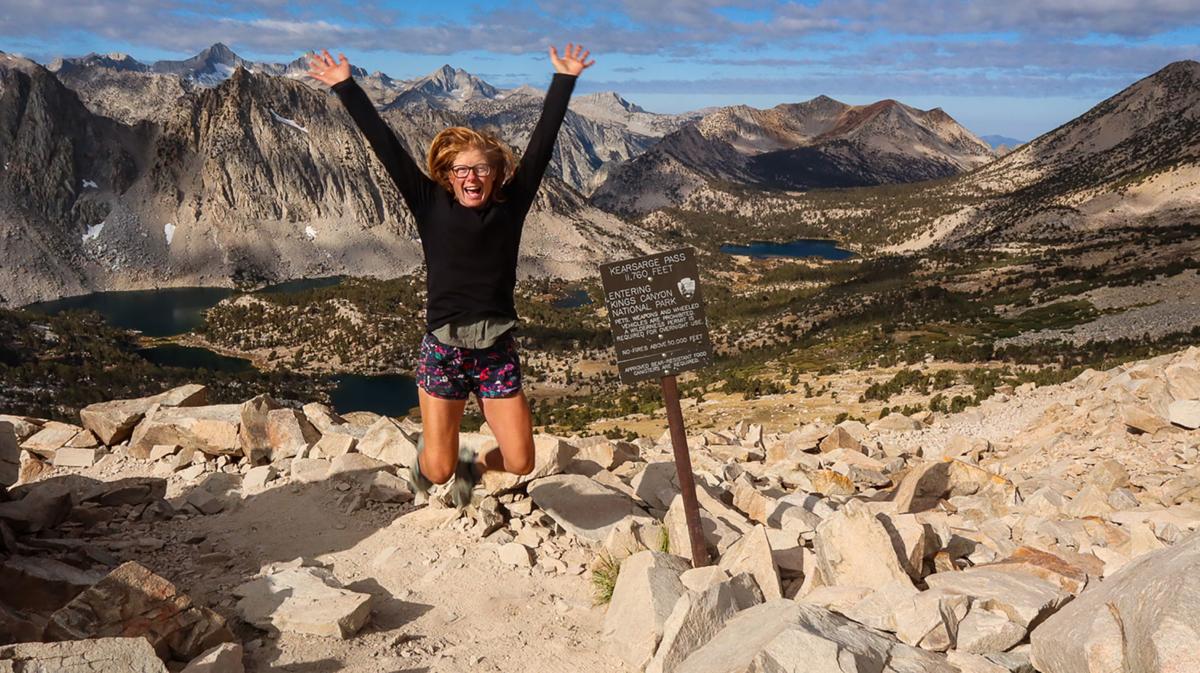 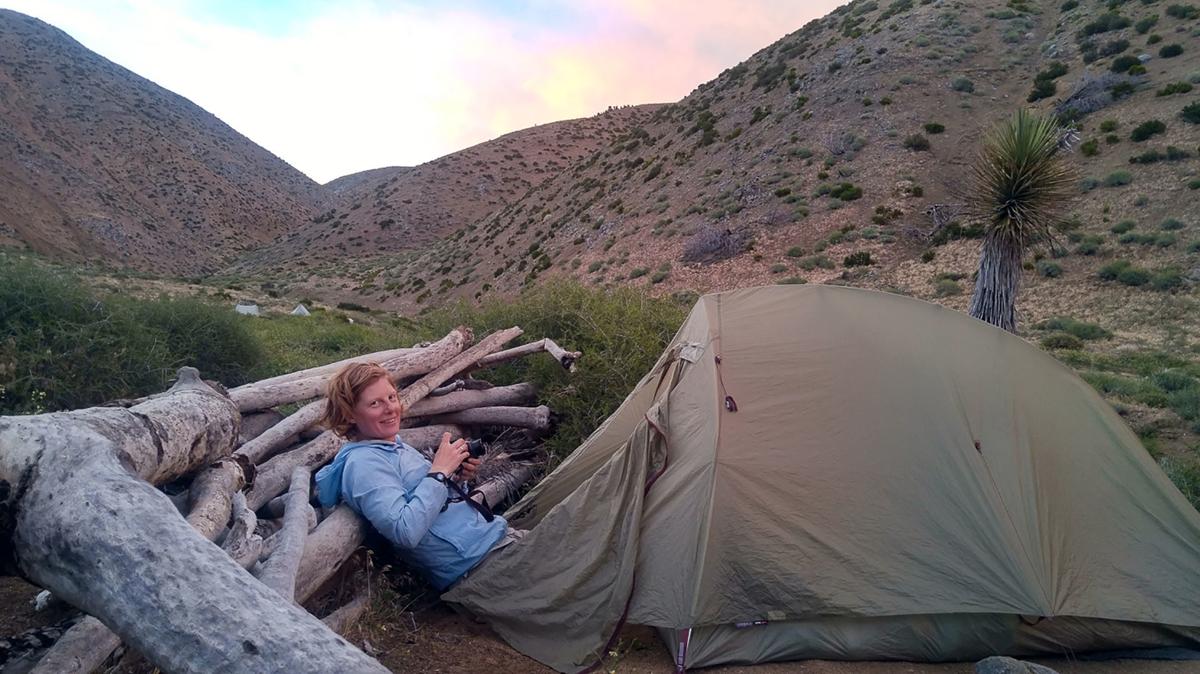 Sarah Berkeley takes a break from her 2,650-mile walk along the Pacific Crest Trail. 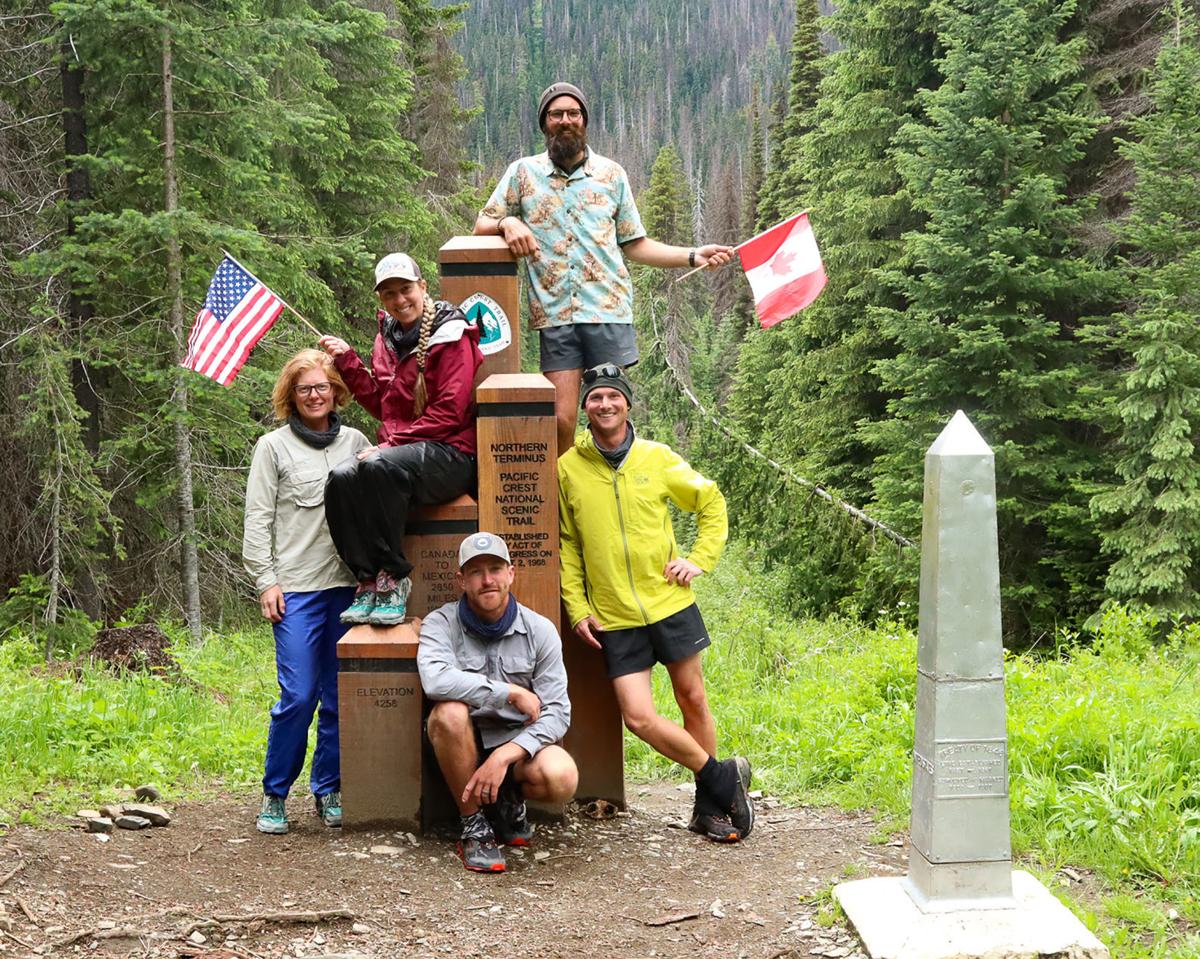 Sarah Berkeley and her tramily -- trail family -- at the northernmost point on the Pacific Crest Trail. 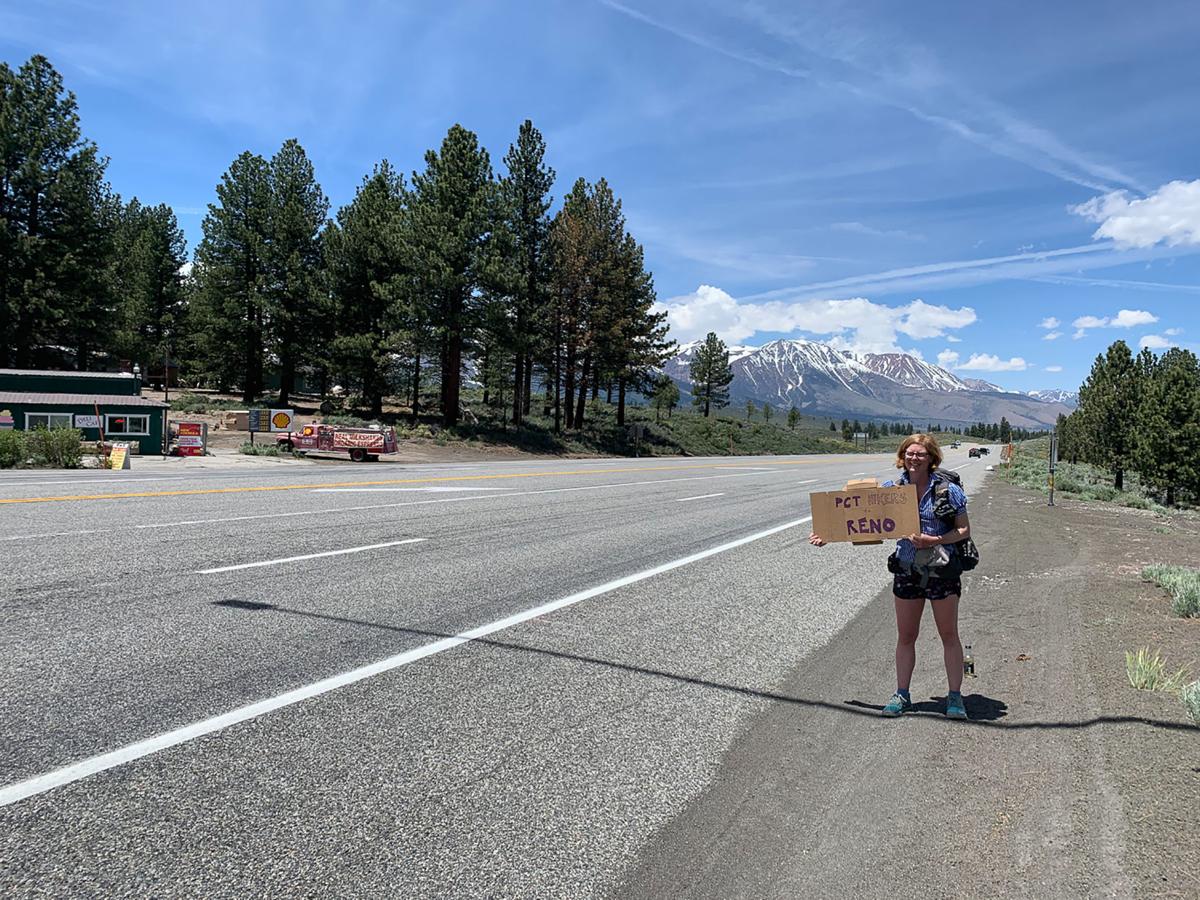 After she was stopped by snow in the Sierras, Sarah Berkeley hitchhiked to Reno, Nevada, where she rented a car and drove to Washington, so she could hike south on the Pacific Crest Trail. 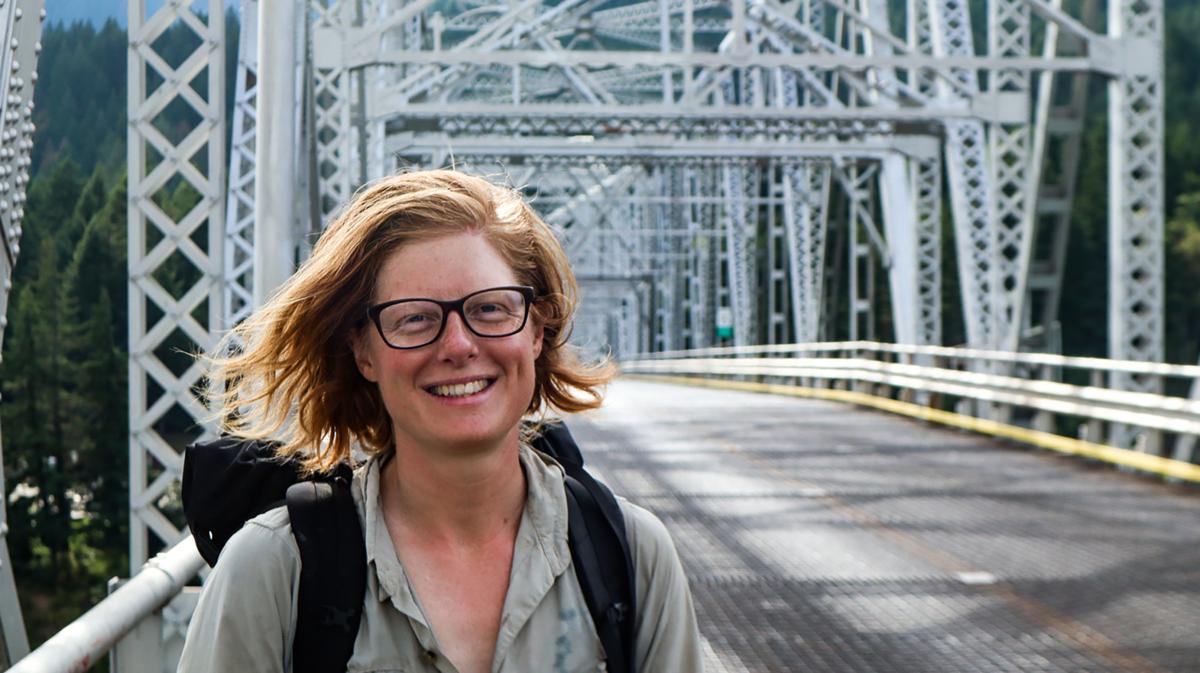 Sarah Berkeley pauses on the Bridge Of The Gods at the Washington and Oregon border. 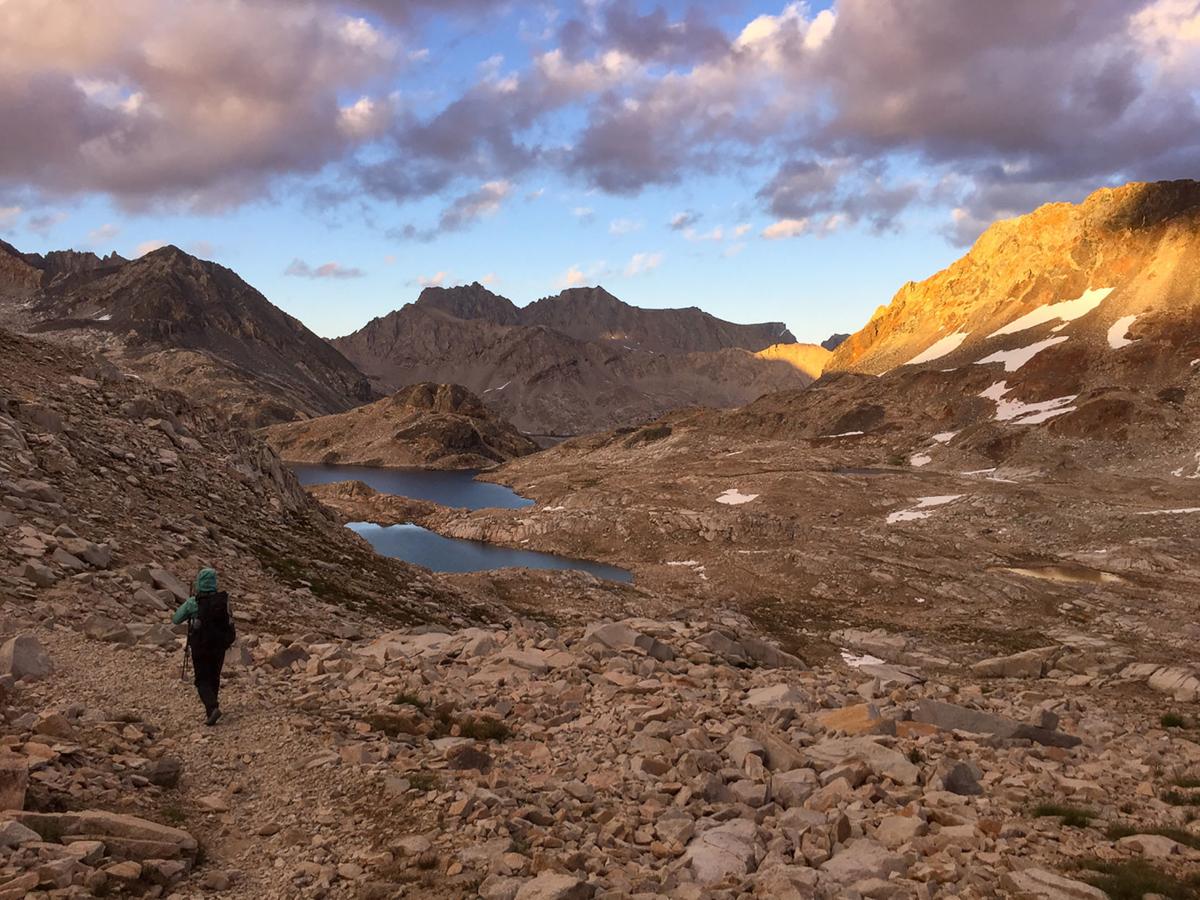 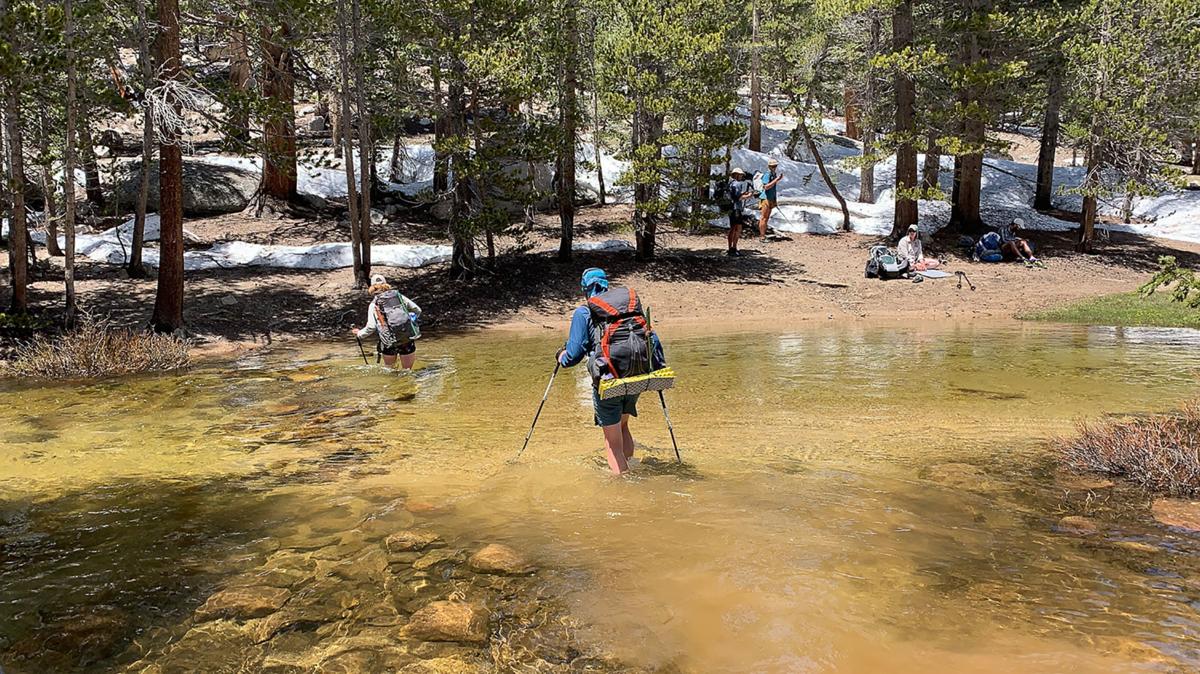 Sarah Berkeley crosses a river in the Sierras. 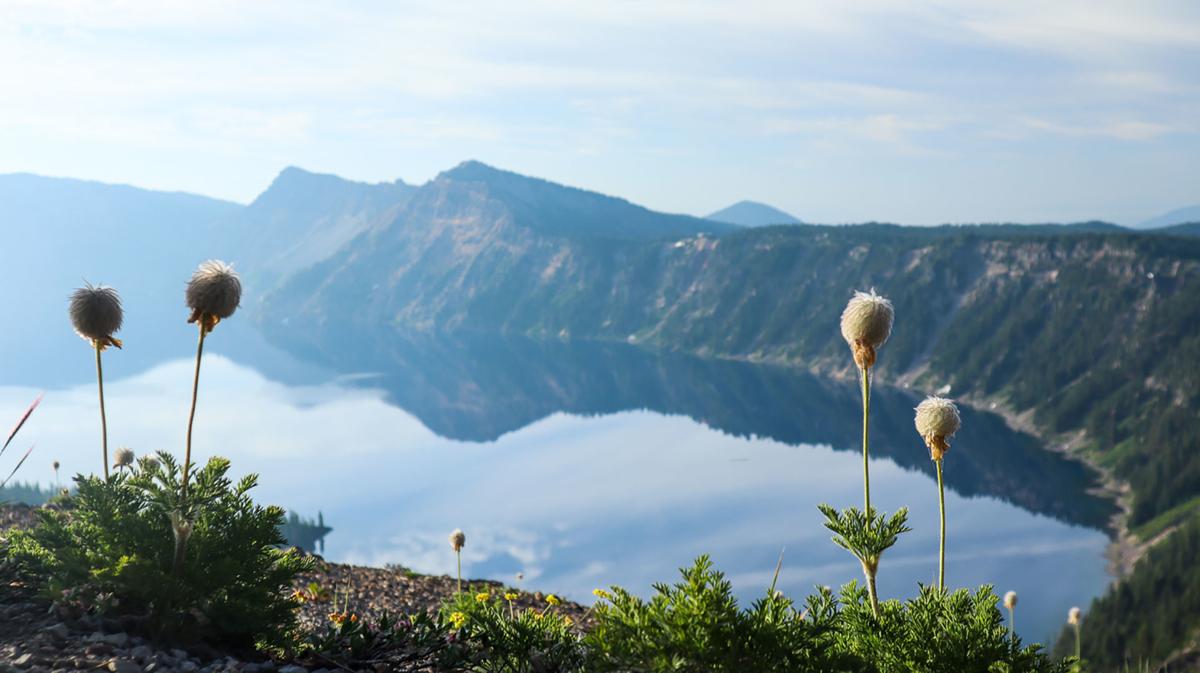 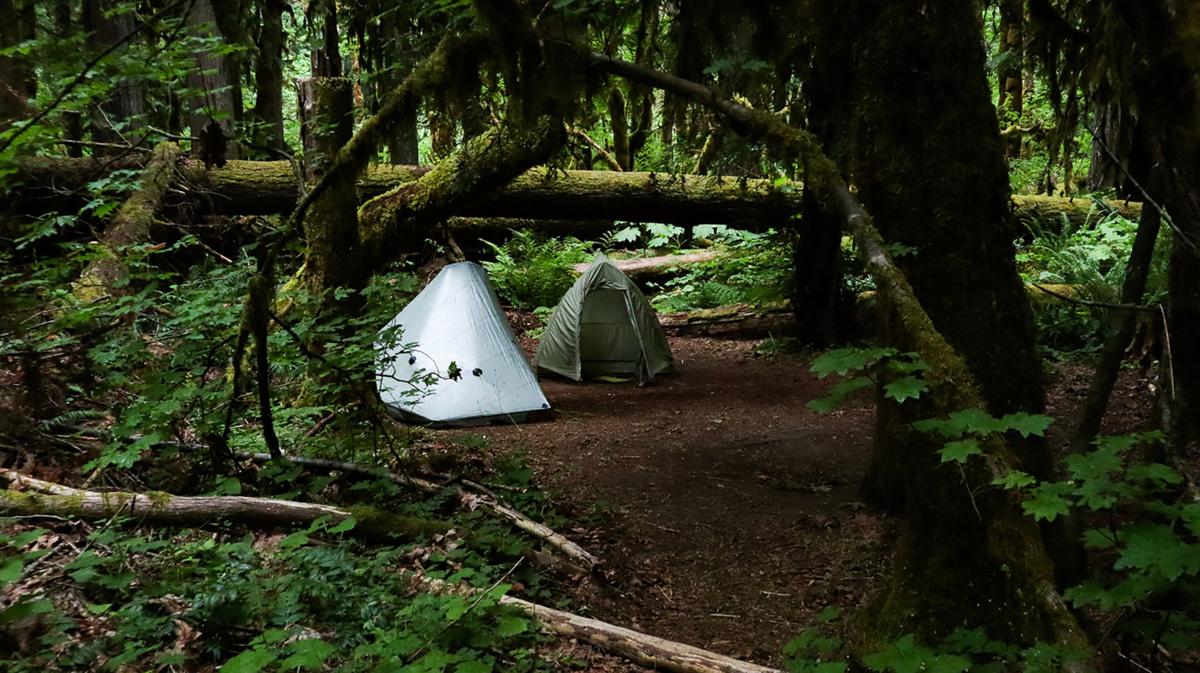 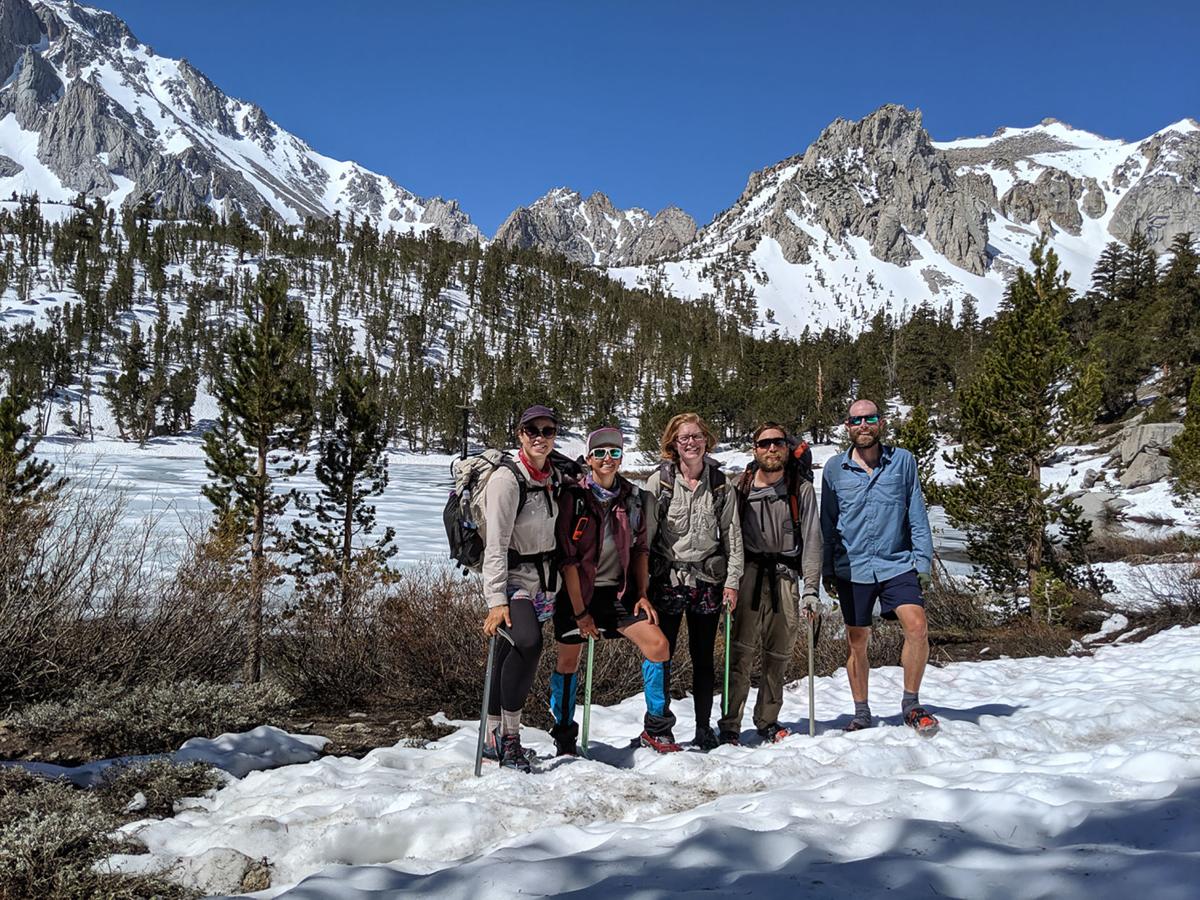 Sarah Berkeley (center) pauses with her new friends in the Sierra snow. 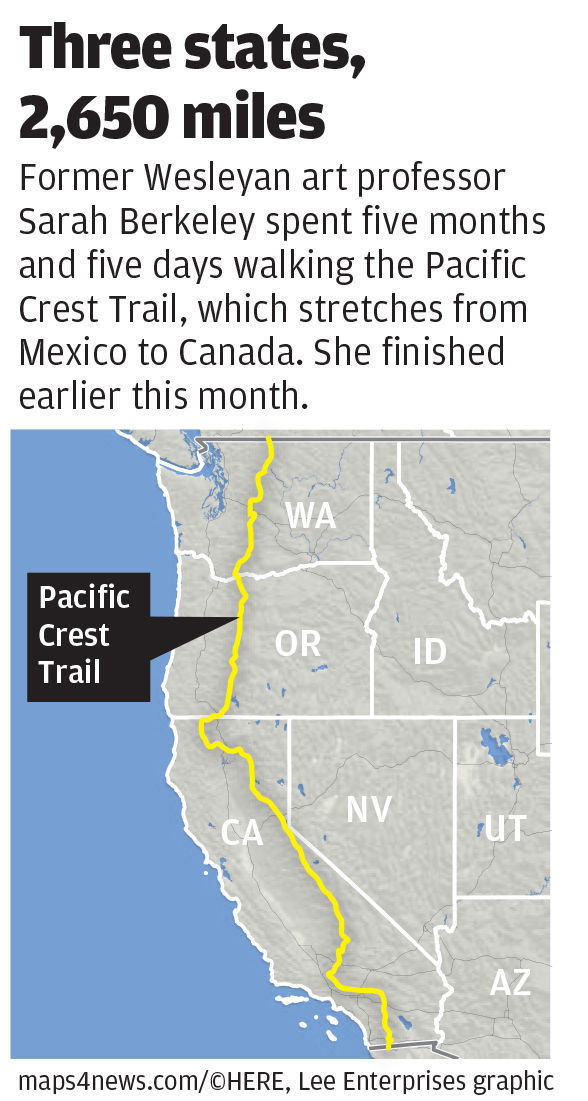 The night Sarah Berkeley pressed send on her computer — applying for a permit to hike the 2,650-mile Pacific Crest Trail — she wasn’t thinking about blisters and trench foot.

Or falling into an icy river. Or clinging to a ledge. Or missing her dog, Hope. Or shedding the trauma and distrust that had clouded her life lately.

She was thinking her application didn’t stand a chance. “I was number 1,204 in line,” she said. “I thought, ‘There’s no way I was going to get a permit.'”

And when she did, two weeks later, she found herself on a fence, swaying. She’d convince herself she couldn’t afford it, that she wasn’t prepared, then she’d listen to friends who encouraged her to go.

She joined a marathon training course, delaying the decision; when the time came, she’d either run 26 miles through Lincoln or take a walk from Mexico to Canada.

She also launched an online fundraiser with a twist: For every $100 donated, she’d give an hour of marketing help to a Lincoln nonprofit that prepares prisoners for productive lives after incarceration.

The plan raised $2,315, and eliminated some of her worries about money.

Six weeks before her departure date, she committed to the trail.

‘One thing will lead to the next’

Not that many years before the hike, Berkeley didn’t know if she’d ever be able to walk again.

The Colorado native was earning her master’s of fine arts at the University of Michigan after getting her undergrad at Nebraska. Her thesis revolved around walking: For her exhibition, she walked the same route daily for 30 days, photographing the sky from the same spot; for her written work, she researched artists who incorporated walking as part of their art.

But she was knocked off her feet by a bulging disc in her lower back that landed her in the hospital twice, requiring years of physical therapy.

And not that many years before the hike, Berkeley didn’t know if she’d ever be able to walk alone.

She was teaching in Chicago after grad school when she was sexually assaulted while walking home from class.

After that, she couldn’t stop looking over her shoulder.

“I was super nervous,” she said. “It has taken a number of years to overcome the PTSD.”

She ended up back in Lincoln, teaching photography and digital media at Wesleyan. She’d put in five years there — and was about to go up for tenure — when she resigned.

It didn’t feel like the right long-term fit, she said.

“I’m an artist before I was a professor, and I felt my artwork needed me to do something else. I left and I really didn’t have a plan on what to do next.”

She ended up in the northeast, where her brother lived and where she’d seen signs for the 273-mile Vermont Long Trail.

She’d been on day hikes before, and overnight backpacking trips, but never a long-distance walk. Still, her back was getting stronger — she completed three triathlons — and in September 2018, she slipped on a 44-pound pack.

“I was kind of on a quest to figure out what was the next thing in my life,” she said in a fundraising video for the Pacific Crest hike.

She didn’t have a revelation, but the trail helped her, changed her. She thought about the trees marked with white blazes, paint stripes reassuring hikers they weren’t lost.

“I’ve taken this back into my life off the trail,” she said. “Just trusting one thing will lead to the next.”

She also felt the generosity of others — strangers who replenished her food supply, another who loaned her a car.

Then she met a hiker who’d bagged the triple crown: Pacific Crest; Appalachian; and Continental Divide. She asked him which was best.

“And he said, ‘Hands down, the Pacific Crest.’”

A month later, she was pressing send on her computer.

Stopped by snow in the Sierras

The solution to her money problem — a fundraiser that helped her and the nonprofit — was personal.

She’d learned about Released and Restored through a friend. The organization works with all prisoners, but Berkeley was interested in its EMPWR program (Embracing My Personal Worth and Resiliency), which focuses on women.

She learned 64 percent of incarcerated women were threatened or coerced to commit crimes, and more than 80 percent were victims of abuse.

Berkeley is an abuse survivor, she said, so that resonated with her.

“I think it’s an awesome mission. Helping them rebuild dignity and self-worth is extremely important.”

The founder and executive director of the 15-year-old nonprofit was happy for the marketing help. And impressed with Berkeley’s plan.

Berkeley had less than two months to prepare. She mailed herself a month’s worth of meals — peanut butter, tuna, instant mashed potatoes and other high-fat, high-calorie foods — to pick up at post offices along the way.

She intended to walk south to north, and started April 17 with 30 other permit-holders at the Mexican border east of San Diego. But more than a month in, she ran into heavy snow in the Sierras and, like many others, traveled north to the Canadian border in Washington to approach from the other direction.

“And then I hiked south for the next three months, connected my footsteps and ended my hike.”

She returned to Lincoln earlier this month, five months and five days after she started.

Life could be harrowing on the trail.

Berkeley had close calls, like the morning she fell through a snow bridge and into a river.

“It was a shock. I tried to stand up but the current pulled me down.”

She was soaked, and ended up hiking in her long underwear until she could dry the rest of her layers.

The trail could be trying in other ways. She ran low on food. She walked in pain from blistered feet. She got scared. She got homesick.

There were times she thought: “I want my dog. I want my bed. I want my favorite coffee mug.”

But she also fell into the trail’s rhythm and learned to respect its demands, because out there, that’s all that mattered. She had fewer choices but bigger stakes.

“It’s a different lifestyle when you’re walking all day, every day. Your life is simple: Food, shelter, water.”

It got easier. When she started, her pack weighed 38 pounds and she covered 15 miles a day. But she learned to live without, cutting it to 25 pounds. Toward the end, she could cover 25 to nearly 40 miles.

And she didn’t realize it until a friend following her on Facebook pointed it out, but somewhere along the way, she’d shaken the fear she’d been living with.

The trail had required her to trust herself and others, and she did.

“She said it’s amazing to see how I’ve rebuilt myself and recovered. This hike was a big part of it.”

The 41-year-old isn’t sure what’s next. For now, she’s running her marketing company, making art inspired by her walk, and studying maps of the 3,100-mile Continental Divide Trail.

Instead of record attempt, Lincoln runner ends up in surgery

Alex Wright thought his legs and lungs were ready for a record-breaking run along the 2,650-mile Pacific Crest Trail.

Starting in the summer of 2009, Trevor Wright pedaled 6,500 miles from Colombia to Argentina. He made friends and collected memories: Biking past roadside crocodiles in Brazil, savoring beef that rivals Nebraska's in Argentina, waking up in deserts and jungles and mountains, in big cities and the emptiest of areas.

Lincoln police find body of dog that was reported missing

Lincoln police on Saturday found the body of a dog that had been reported missing last week.

New Malcolm ballfields to get $100K grant from county for fencing

A $1.6 million effort to build new baseball and softball fields in Malcolm received a $100,000 boost from the Lancaster County Board on Tuesday.

In his 74 years, P. Stephen Potter danced with the Rockettes, completed more passes at Memorial Stadium than any other Nebraskan, became a thi…

MILFORD — When Jim Conner was 6 years old, he went up on a roof with his dad, Beryl, who started Conner Roofing.

Nebraska Wesleyan University's newest building is still a few months from celebrating its one-year anniversary of being open to students.

During an eight-day expedition, a 65-year-old Lincoln woman recently climbed to the top of Africa's highest mountain.

Sarah Berkeley takes a break from her 2,650-mile walk along the Pacific Crest Trail.

Sarah Berkeley and her tramily -- trail family -- at the northernmost point on the Pacific Crest Trail.

After she was stopped by snow in the Sierras, Sarah Berkeley hitchhiked to Reno, Nevada, where she rented a car and drove to Washington, so she could hike south on the Pacific Crest Trail.

Sarah Berkeley pauses on the Bridge Of The Gods at the Washington and Oregon border.

Sarah Berkeley crosses a river in the Sierras.

Sarah Berkeley (center) pauses with her new friends in the Sierra snow.