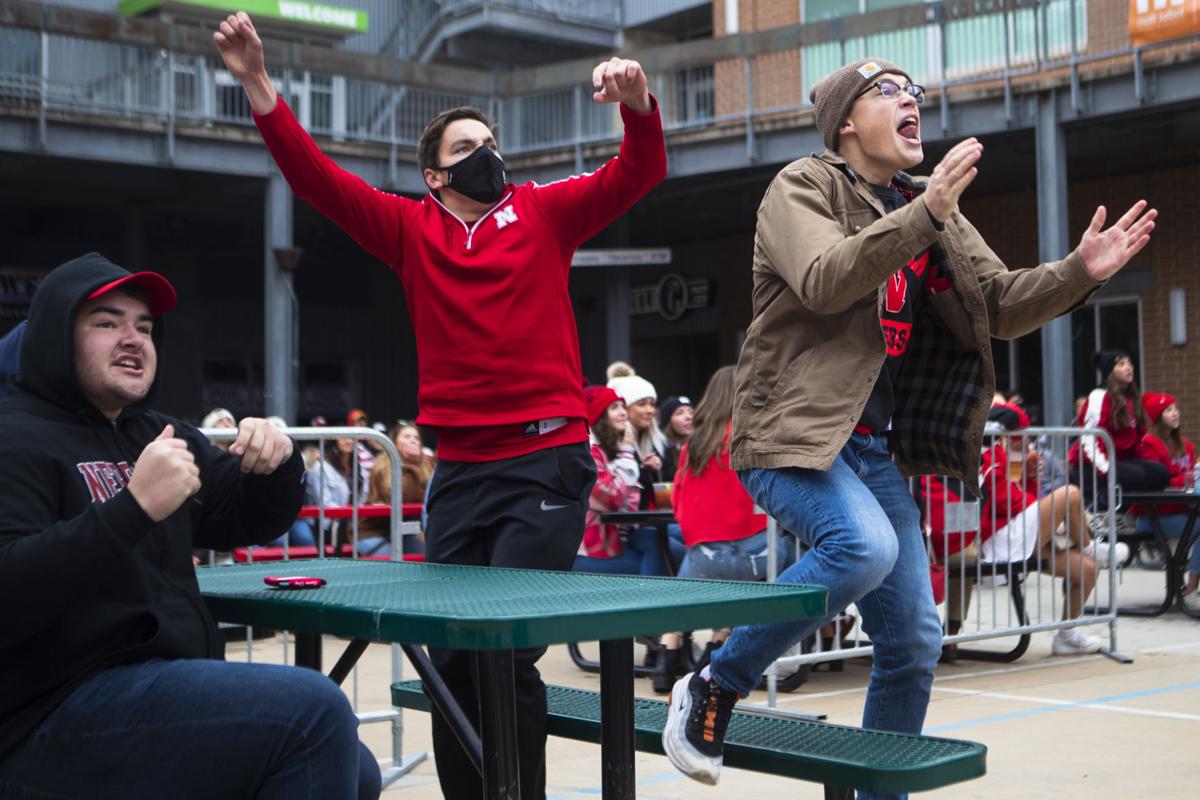 Nebraska fans in the Railyard jump from their seats after a Husker touchdown in the first quarter of Saturday's game against Ohio State. 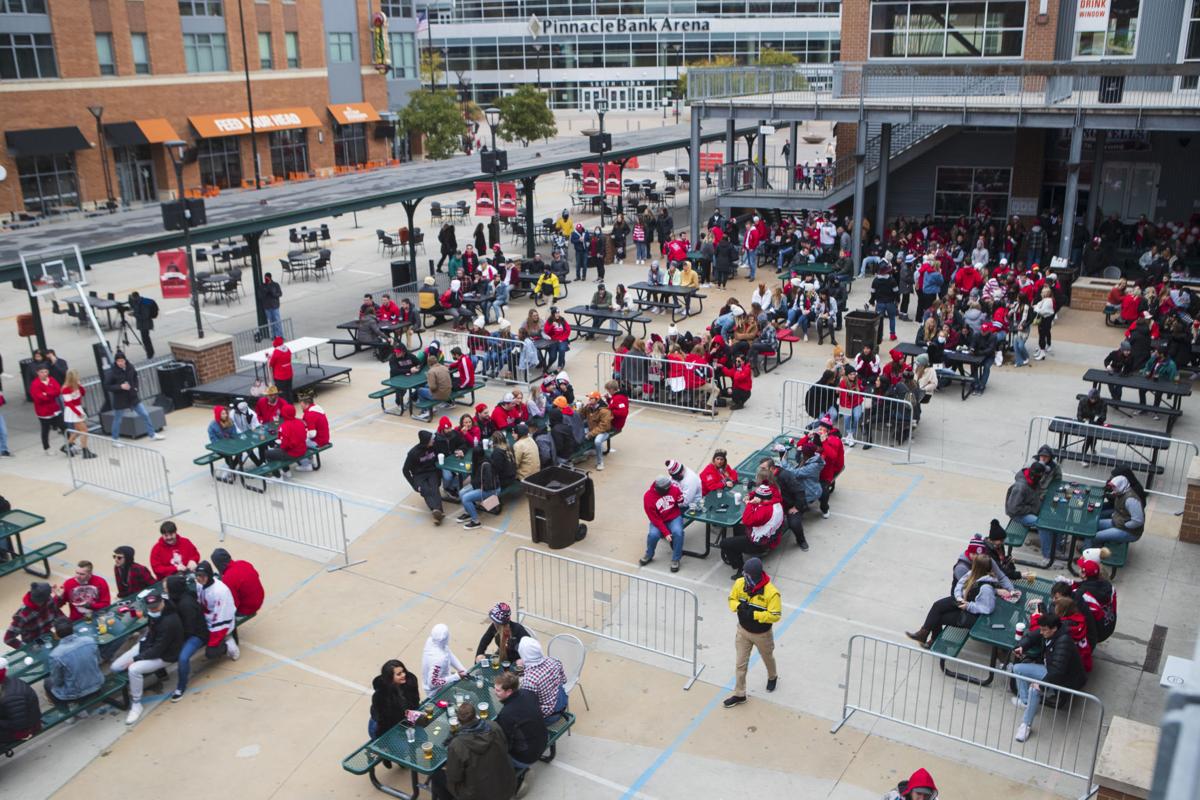 Fans were asked to sit at socially distanced tables in the Railyard on Saturday. 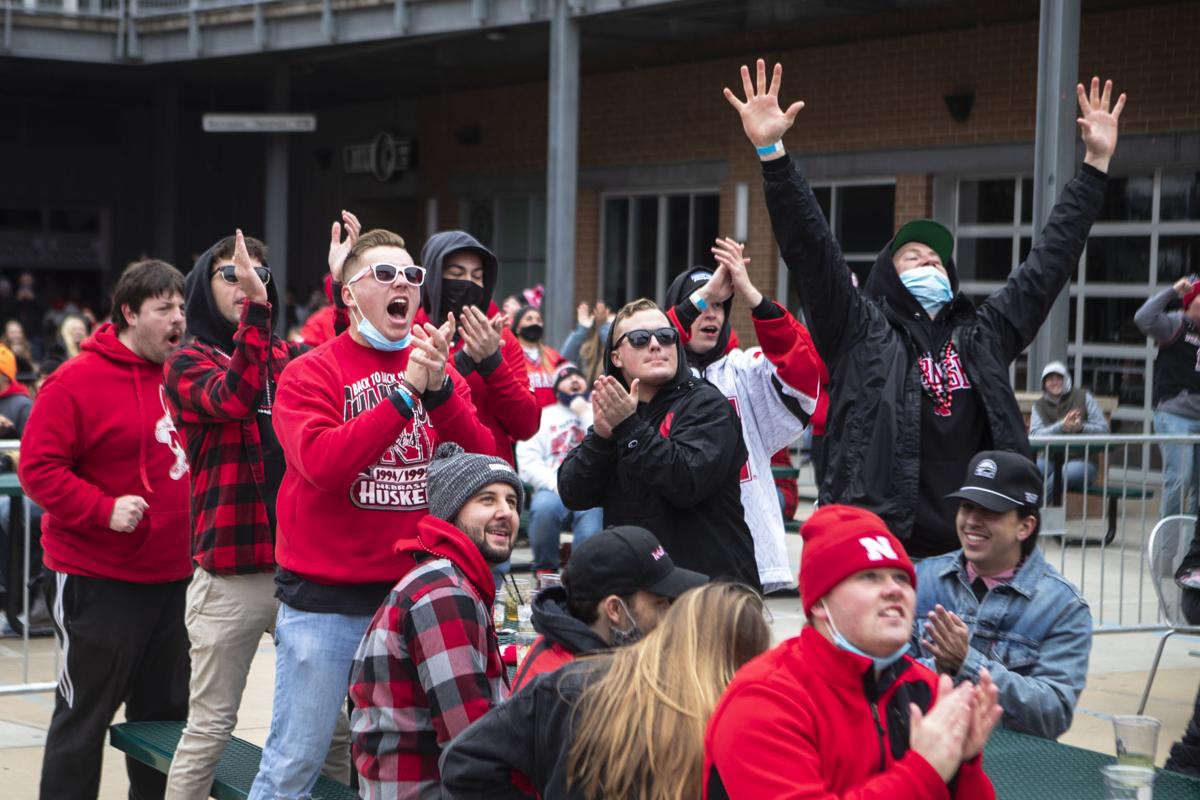 Nebraska fans cheer on their team after a strong first quarter against Ohio State on Saturday.

They waited 10 months and 25 days between Husker football games. But that streak finally came to an end late Saturday morning, as fans braved brisk temperatures and ventured into the Railyard to watch on The Cube as Nebraska took on Ohio State.

They cheered for touchdowns, lamented fumbles, and their cold beverages tasted ever so slightly like normalcy.

Cole Egr, a junior at the University of Nebraska-Lincoln, said he'd been preparing for Saturday the whole year.

"We got a buddy to come down from Illinois just for this, so we're just really happy to be out here," he said after the Huskers scored a touchdown on their opening drive.

Two first-year nursing students who were also in the Railyard said watching the game being played in a mostly empty stadium was an odd start to the season, but a welcome one nonetheless.

"We were just driving past, not expecting many people, but people are really wanting to celebrate," said Kennedy Klein.

"This is our first football experience in college, so it's still exciting," Montanna Brelsford added.

But while the Railyard drew a decent-sized crowd, the rest of the Haymarket and downtown area was relatively empty. Some people made their way to the warmth of places such as Gate 25 and McKinney's Irish Pub nearby, but most sidewalks and parking lots in the area were sparse.

Amanda Ochsner, who ended up in the Railyard, thought that made sense.

"I think people are taking (the coronavirus) seriously, so they're maybe staying home," she said.

Still, the energy of the crowd at the Railyard was palpable, especially early on in the game as Nebraska kept it close.

Eric Marsh, who owns Longwell's, was happy with the number of customers Saturday, though he thought the colder temperatures probably led more people to stay home. He said he expects a bigger crowd next week, when the Huskers host Wisconsin at Memorial Stadium.

"Close to 11 months without football is making people want to take part in the fellowship of football," he said. "Our team played well, at least in the first half."

Photos: Nebraska and Ohio State open the season at the Horseshoe

Sadiyah AIi is a Portland, Oregon native and senior at University of Nebraska-Lincoln studying journalism and political science.

Nebraska fans in the Railyard jump from their seats after a Husker touchdown in the first quarter of Saturday's game against Ohio State.

Fans were asked to sit at socially distanced tables in the Railyard on Saturday.

Nebraska fans cheer on their team after a strong first quarter against Ohio State on Saturday.