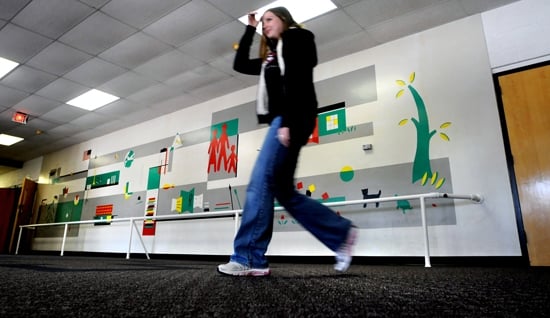 Emily Ott, 14, an eighth-grade Heartland Community School student, walks past the mural at the school's entrance on the outside of the gym wall. (Robert Becker) 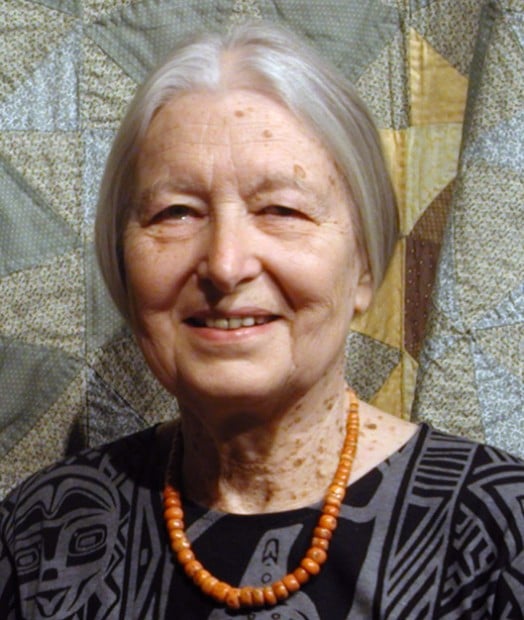 HENDERSON — The young teacher with a love for art took the year off to get pregnant.

But Mary Lou Goertzen couldn’t stay completely away from work. So she spent much of the time painting a mural that would grace the entrance to her alma mater for the next 54 years.

The mural is a collage of images — a Bible, a corn stalk, books — that depict life at Heartland Community School and in Henderson, a farming community in southwest York County with strong Mennonite roots.

“That was my idea — to do something that reflected images of what a small community is,” said Goertzen, who has since gone on to a life of significant fame as an artist and a war protester.

Now the brightly colored mural she created is in danger of being painted over.

“We thought this would be an opportunity to promote school spirit,” board President Gary Braun said, reading from a statement drafted by several board members.

“We want a school that reflects the student body and gives them a sense of ownership and pride in their surroundings.”

Some board members would like to see the school’s front entrance modernized, as other parts of the school have been, and worry the mural is outdated.

The board hasn’t set a date to discuss the mural, but it meets again March 9.

Meanwhile, at least one former student worries painting over the mural — “The Community Educates Its Children” — would erase an integral part of the school’s history.

“That’s like the first thing people remember when they think about that school,” said Barbara Dessart of Alameda, Calif.

She thinks the board should survey the community as well. And she wonders whether the mural has historic value as an example of Goertzen’s early work.

As for concerns about the mural being dated, all art is dated, she said.

“Of course, it’s reflective of the time it was painted,” she said.

Goertzen, who now lives in Deadwood, Ore., painted the mural before deciding to leave teaching and pursue art full-time. She since has designed images for popular Block china and has shown her art at galleries across the West Coast.

She also gained fame as an anti-war activist, providing shelter for soldiers fleeing the Vietnam War.

“I’ve spent a lifetime just trying to speak truth to power,” she said.

Goertzen said she would rather see the mural, which she paid for by hosting one-act plays, refreshed with new colors than erased.

But she understands and supports students’ desires for something new, something they can better understand.

Heartland senior Quint Geis said the mural didn’t reflect the school today. He suggested a husky dog, the school’s mascot, be painted over it. Still, he wishes there was a way to preserve it.

“It kind of represents how success can happen in a small town,” he said.

Reach Kevin Abourezk at 473-7225 or kabourezk@journalstar.com.

Officers responded to a house near 18th and Dakota streets around 6:25 a.m., where a woman had been shot in the head and suffered life-threatening injuries, police said.

Officers responded to a call from a 42-year-old man who said he was awakened by a gunshot in their house near 18th and Dakota streets, where he found his mother, Janet Kotopka, in the living room with a gunshot wound, police say.

Amanda Benson's attorney is asking a federal judge to order the city to immediately initiate disciplinary proceedings, prohibit him from being sent to fires in the interim and appoint an independent, third-party investigator.

Troopers found 142 total violations, including 29 relating to bad brakes, worn tires, or other safety risks, that required vehicles to be placed out of service.

A South Bend man was killed in the crash involving two semi trucks that shut down westbound traffic on I-80 for nearly six hours.

Search warrant at Lincoln home turns up $7,000 worth of meth, lands two in jail

Investigators served the warrant at the residence of 42-year-old Aaron Kuntz, where they found the meth, items used for the sale of drugs, and more than $900, police say.

Sheriff Terry Wagner said deputies found $18,986 and an array of drugs, including a few jars of marijuana, several pills, 15 grams of suspected mushrooms and suspected LSD.

Emily Ott, 14, an eighth-grade Heartland Community School student, walks past the mural at the school's entrance on the outside of the gym wall. (Robert Becker)