The city will closed the eastbound lane of Havelock Avenue recently so contractors could remove the unstable brick facade from a longtime problem property. 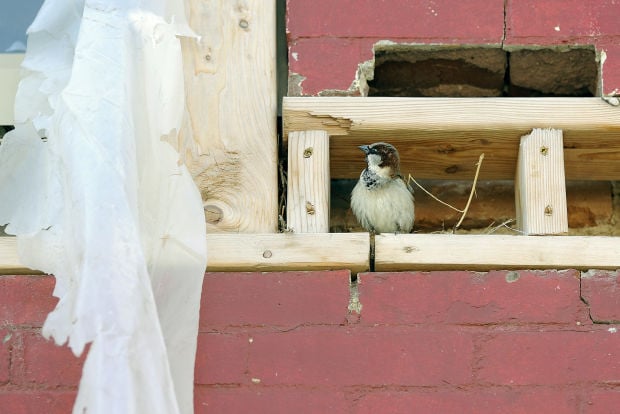 The broken facade at 6117 Havelock Ave. used to attract birds. 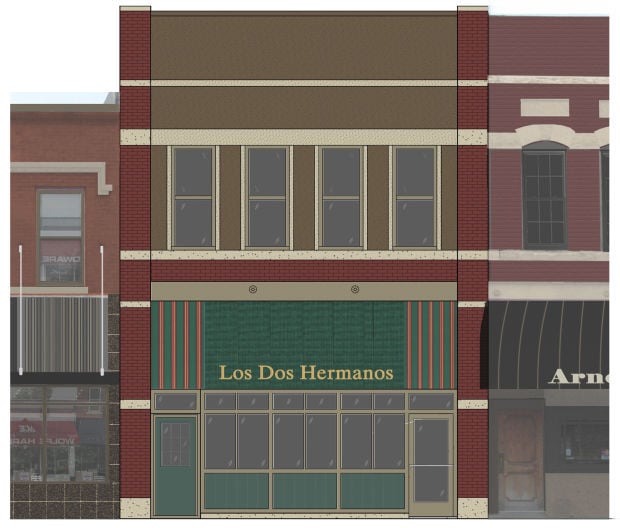 An architect's 2009 vision of what 6117 Havelock Ave. was supposed to look like. 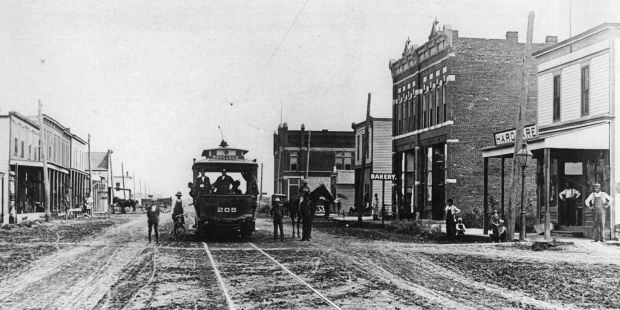 At the turn of the last century, 6117 Havelock Ave. was home to a bakery.

For nearly two years, a tattered plastic drape has hidden one of Havelock’s most historic buildings — and the neighborhood’s newest frustration.

“It’s been the biggest nightmare I’ve been around,” he said. “And nobody has answers. I can’t help but think this could only happen in Havelock. I don’t think this would go on downtown.”

The building behind the plastic has produced so many problems that nearly everyone involved feels victimized but in different ways. They differ on what — and who — is responsible for the trouble and the rubble, or what it will take to fix it.

But they agree something needs to change, because the brick storefront has so far swallowed all of the time and money thrown into it.

Last month, the city floated another option for the 120-year-old building. Demolition.

The building next door wasn’t a problem when Stutzman bought his bar 34 years ago.

It held a Conroy’s Bakery, and that was appropriate. Because when Havelock was young, in the 1890s, the Walton Building had been home to another bakery.

It was two buildings, actually, nearly identical twins built a few years apart. They would house a cigar maker, a pool hall, a mercantile.

Since the 1940s, the west building has been home to Arnold’s Tavern.

And in 2007, a few years after opening a restaurant there, Maria Rico bought the east half from James Conroy for $60,000.

“Once he moved out,” Stutzman said, “everything kind of went to heck.”

“Sometimes that happens when you start digging into old buildings, problems surface,” he said.

And on Havelock Avenue, they kept surfacing.

“It seems like any time another brick was removed or the contractor took another step toward the façade improvement, we kept finding structural flaws,” said Bradd Schmeichel of Urban Development.

This is where the stories start to separate. When Rico describes what happened — and what didn’t happen — in the past few years, her version doesn’t always match the city’s.

For example, she said, she didn’t choose or hire any contractors; she said the city did. But city officials say Rico selected the first contractor, although Urban Development found the company that took over after the repairs became problematic.

Rico also said she was told to close her restaurant temporarily, during the construction. But Connolly said health department records show the restaurant closed in 2007, two years before work began.

Rico moved to Grand Island to work at a meatpacking plant while waiting for her building to be finished, she said.

She had an architectural sketch from early 2009 of what 6117 Havelock was supposed to look like: Solid and straight. Historic.

“I was so happy when I saw this picture,” she said.

But back in Havelock, the contractor found another problem.

A critical I-beam that spanned the width of the building — about a third of the way up — needed to be realigned and reattached. It was pushing a brick column beneath it out, toward the street, and threatening the stability of both buildings.

“There needed to be some correction on that, and that was going to take more than what the grant was,” Connolly said.

Another disagreement here: Stutzman, the bar owner, said the city’s contractor created the problem. The situation was so precarious — his own business so vulnerable — he feared Arnold’s might have to close, he said.

The bar owner avoided that by writing a check. Stutzman and Rico split the costs of stabilizing and securing the buildings. He paid $19,000, and the city loaned Rico $20,000 in August 2012 for her share of the repairs.

The city was now $80,000 into Rico's building, and it heard more bad news: The façade repair would cost another $85,000. But the roof was also shot, and it didn't make sense fixing the façade with the weather pouring in.

What happened next left the owner and a construction company feeling like they were misled by the city.

Last year, the city offered Rico a $174,616 loan, enough to fix the façade and repair the roof. It would forgive half of the amount if she stayed in the building for five years.

In August, Urban Development talked to contractors about replacing the roof. It selected Cheever Construction, and its president believed he was dealing with the city, he said.

When Cheever’s bid was accepted, it was told to sign the contract with Rico. But Oestreich still believed the city was paying for the project, he said.

"We were led to believe the funding was there," he said.

And the loan was moving forward. On Oct. 24, Rico signed a promissory note for the $174,616. A week later, the city filed paperwork with the county assessor’s office recording the loan for the property.

On Dec. 13, as part of the loan agreement, the city had Rico sign a release, promising she wouldn’t sue the city for discrimination.

Rico’s former lawyer had earlier warned that Rico might seek damages “for certain claims of discrimination by the city,” according to the release she signed.

Connolly said the city required her to sign the release as a precautionary measure, not because it saw merit in her claims. And she never filed a formal complaint against the city.

“Throughout this whole process, she had made comments about how she felt like she was being discriminated against. But we can’t find any reason to believe that, given everything that’s been done for her.”

Rico said this week she does feel discriminated against. Why isn’t her building finished after all these years? None of the other businesses went through this.

“I’m mad. I’m the only Hispanic business owner in Havelock.”

'We're getting hung out'

By the time Rico signed the release in December, Cheever Construction had been finished with the roof for more than a month.

“We went in and fixed a very iffy situation. There was a lot of deterioration. You could see someone had been in there putting some new framing in but they didn’t know what the heck they were doing,” Oestreich said.

“The thing’s more watertight now than it has been in decades.”

“We’re getting hung out on this deal.”

But there was no deal, Connolly said. At least not between the city and Cheever Construction.

“We never told Maria to go hire them, we never said anything like that,” he said. “The city was talking with Cheever about the cost of putting the roof on. But there was not an agreement between the city and Cheever.”

The city told Rico repeatedly there was no money until the mayor approved the deal, he said.

And late last year — after the roof was in place, after Rico signed the loan papers and the promise not to sue — the mayor killed the deal.

The city has "great sympathy for Ms. Rico's plight," Rick Hoppe, the mayor's chief of staff, said in a statement Friday.

"Unfortunately, the issues associated with her building were far in excess of what was reasonable to expect of the city. We simply could not justify nearly exhausting a business assistance fund for one owner when it could be used to help many other business owners succeed."

Last month, with no payment in sight, Cheever filed a lien against Rico's property.

Rico said she didn’t know she was signing a contract with Cheever, although the company provided an Oct. 9 email to her containing the contract.

She also said she was only doing what Schmeichel of Urban Development told her to do.

“They told me when I sign the papers, they can start on the roof.”

No, Connolly repeated. Nobody from Urban Development told her to hire Cheever.

“That part is indisputably clear,” he said. “He never told her, suggested, implied, referred her or did anything to send her to Cheever.”

Rico also said she was never formally told the loan fell through.

But when Schmeichel called her in January to tell her the loan was dead, and to offer another, Rico was uncooperative, Connolly said.

He offered a new deal: $84,855 to complete the façade. The city would forgive all of it if she stayed in the building for five years.

But she would have to sign a new release promising not to sue.

Last week, Rico said she was looking for a lawyer.

Last month, another city department, Building and Safety, jumped into the mess on Havelock Avenue, deeming the building dangerous and sending Rico a series of ultimatums.

* Protect the sidewalk with a covered walkway by April 10 or the city will do the work and charge her for it.

* Repair or replace the north wall, facing the street, by April 25.

* Or demolish the building by June 1 — or the city might do that, too.

But demolition is a last resort, Connolly said. It’s difficult to knock down a building that shares walls with its neighbors. And the city has invested in 6117 Havelock already.

But that leaves Cheever with an unpaid bill, Rico with a building that’s been vacant and crumbling for years, and the owner of Arnold’s Tavern with a neighbor that blemishes his building, squeezes the sidewalk and obscures his bar’s neon goblet.

“I want it to be fixed. I don’t want a big void,” the bar owner said. “But if it’s going to sit like that forever, I want it gone.”

City should pay for roof over troubled building, contractor says

With so much controversy surrounding a troubled building in Havelock, the construction company owed $85,000 for a new roof wanted to cut throu…

Thursday’s early-morning storms left an unoccupied Havelock building in even worse shape than it was.

In Havelock, no solution for longtime problem property

Havelock’s seven-year headache is about to get a temporary fix, but city officials say there is little they can do to relieve all of the pain …

The problem property in Havelock that’s tormented neighbors for years will now disrupt traffic, too.

This is what more than $100,000 in city grants and loans and contractor bills had led to -- a wall of fresh plywood covering up years of conte…

After years of swallowing city money, a boarded-up building at the heart of Havelock Avenue could soon have a new future.

The city will closed the eastbound lane of Havelock Avenue recently so contractors could remove the unstable brick facade from a longtime problem property.

The broken facade at 6117 Havelock Ave. used to attract birds.

An architect's 2009 vision of what 6117 Havelock Ave. was supposed to look like.

At the turn of the last century, 6117 Havelock Ave. was home to a bakery.