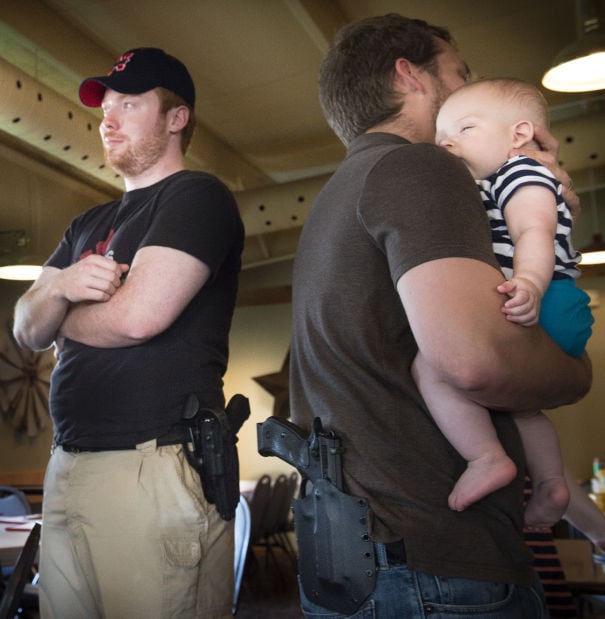 Six-month-old Judah Crawford rests comfortably in the arms of his dad, Nicolas Crawford, while Crawford and Caleb Kalisch (left), both of Omaha, talk with other supporters of open-carry gun rights Tuesday night at the Round the Bend Steakhouse in Ashland. 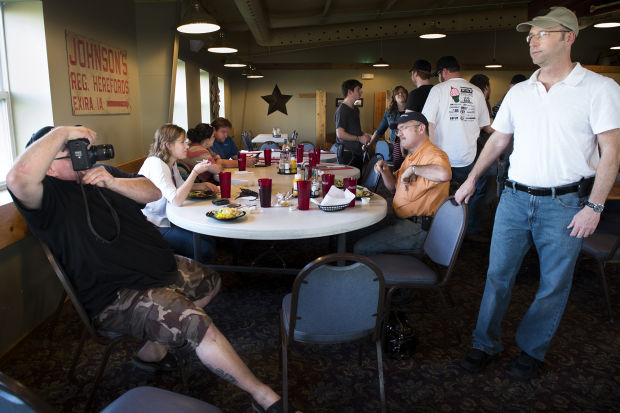 Galen Williams of Ashland (left) takes a picture for Greg Serrano of Omaha at a casual meet-up of gun-rights supporters Tuesday night at the Round the Bend Steakhouse.

ASHLAND — Taylor Crawford strolled into Round the Bend Steakhouse Tuesday evening packing a 6-month-old baby on one hip and a 9 mm Beretta handgun on the other.

It was the baby, not the gun, that got the attention of her fellow diners. After all, her baby was the only one in the restaurant. The gun was just one of many.

She and more than a dozen others were at Round the Bend, the home of the annual Testicle Festival, for the first meeting of a group of Nebraska gun owners passionate about their guns and their right to carry them.

Their conversation ranged from politics to photography to the importance of knowing local gun laws to raspberry vinaigrette.

It was a social gathering, with a dash of grassroots politics. The event was organized by Crawford’s husband, Nicolas Crawford, using a Facebook page he created to advocate for openly carrying guns.

Nicolas Crawford, and others at the event, said they want to educate and normalize the sight of firearms being carried in the open.

“Open-carry, to me, I personally feel like a billboard for responsible gun owners,” said Crawford, who has both a concealed-carry permit and an open-carry permit for Omaha.

But to those who advocate gun control, that billboard broadcasts danger.

Amanda Gailey, a Lincoln mother of two and founder of the group Nebraskans Against Gun Violence, said in a phone interview Tuesday night that this is a case where one bad apple does ruin the barrel.

The public shouldn’t have to accept the risk that an untrained or careless person carrying a loaded gun presents, she said.

“The more guns are around, the more opportunities there are for negligent, accident, misunderstandings that lead to lethal consequences you can’t take back,” she said.

She cited the recent death of 21-year-old Justin Felty of Lincoln, who was accidentally shot in the chest early last month, and the April 18 death of 4-year-old Beau Pecor of Hastings, whose 9-year-old brother shot him with a .22-caliber rifle.

“I can’t stand by and let the gun lobby make this country a less safe place for my children,”said Gailey , who would like to see Nebraska adopt tougher gun ownership and carry laws.

There are no restrictions on open-carry in Lincoln; however, Police Chief Jim Peschong warned that openly carrying a gun could result in a citation for disturbing the peace, punishable by up to three months in jail and a fine of $150.

He said shootings like those at Sandy Hook Elementary in 2012 and at Virginia Tech in 2007 have left many people fearful of firearms. If the sight of a gun causes hysterics, and someone is willing to testify in court, police could issue a ticket, although officers might try to first resolve the situation by talking with the gun owner.

Lincoln resident Caleb Larsen keeps a list of places people have visited in Lincoln openly carrying a gun without running into trouble on his website neopencarry.org.

Larsen, who organized a small open-carry event in early April at the Village Inn at 27th and Cornhusker Highway, said he gets more questions than freak-outs when he wears his gun. He wants to educate his fellow Lincolnites.

“We’re not criminals," Larsen said. "We’re not crazy people. We’re friendly, law-abiding people who care about self defense, our country and the Constitution."

Open-carry isn't for everyone.

Mark Miller, who drove from York for the event at Round the Bend, said he prefers to carry his firearm concealed for two reasons.

The first is because he teaches math at York College and doesn't want to scare students and parents who might see him carrying in public.

The second is because he thinks open-carry, while allowing for a quicker draw, puts him at a tactical disadvantage.

"Should I be under a lethal threat, or somebody walks in here right now (firing a gun), if I was the only one open-carrying, I'd be the first one to be taken out," Miller said.

Week in review: Stories that made news in Lincoln

From a soldier running in the Lincoln Marathon to a plane making an emergency landing at the airport, click through the photos from the storie…

Open-carry group to dine in Lincoln

The idea of a person openly, and legally, carrying a gun in the same restaurant his family eats in makes Ari Kohen nervous.

Six-month-old Judah Crawford rests comfortably in the arms of his dad, Nicolas Crawford, while Crawford and Caleb Kalisch (left), both of Omaha, talk with other supporters of open-carry gun rights Tuesday night at the Round the Bend Steakhouse in Ashland.

Galen Williams of Ashland (left) takes a picture for Greg Serrano of Omaha at a casual meet-up of gun-rights supporters Tuesday night at the Round the Bend Steakhouse.