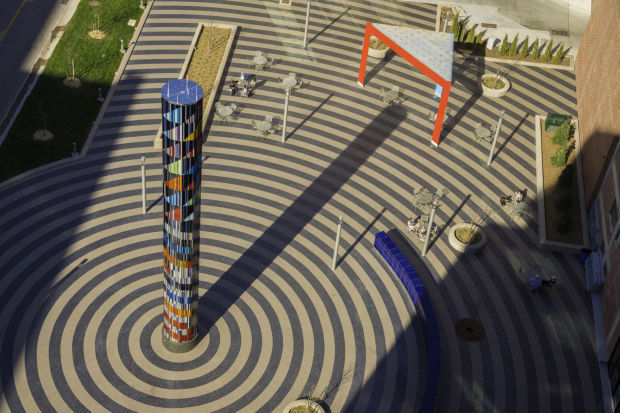 Aerial view of Tower Square at 13th and P streets, where Mayor Chris Beutler discouraged some youngsters from using sidewalk chalk on the paving bricks recently. 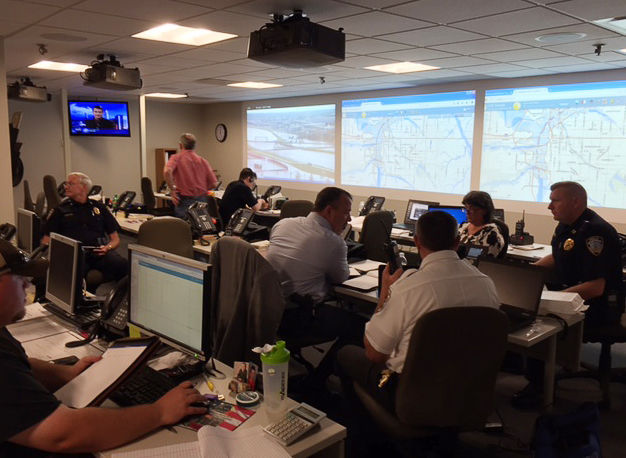 City employees at the emergency operations center were able to watch Thursday as floodwaters rose in Salt Creek, despite being in a windowless room in the basement.

Mayor Chris Beutler is proud of Tower Square, the civic plaza with the tall, multicolored tower that was built in downtown Lincoln last year.

One of Beutler’s favorite artists, Jun Kaneko, designed the entire park. The tower Ascent, lit from the inside at night, sits atop concentric circles of dark and light paving bricks, inspired by the sand gardens found at Buddhist temples in Japan, Kaneko's homeland.

A reporter was waiting in line outside Bison Witches Bar & Deli, right next to Tower Square, around noon one recent Saturday.

Some young adults were hanging out in the square. A few seemed to be drawing on the dark bricks with sidewalk chalk.

A small gray Honda pulled up to the curb on P Street near 13th and parked illegally. The driver got out, left the engine running and the driver’s door open.

It was the mayor. He walked over to the person writing with chalk, had a conversation, then walked back to his car and drove away.

Asked about it later, Beutler said he really, really doesn't like vandalism.

The young woman, he said, did ask him what gave him authority to tell her what to do.

He is the mayor, after all.

"I want to apologize to the 60,000 to 70,000 people whose commute we made miserable (on Thursday afternoon)," said Public Safety Director Tom Casady, mostly in jest, about the traffic jams that occurred after the city closed several main streets because of flooding.

"I want to assure you it was something unanticipated and unavoidable," he said, as he described decisions made when Salt Creek rose on Thursday.

Thursday morning, Lincoln leaders thought the worst of the flooding from an overnight storm was behind them. They thought Salt Creek had crested in Lincoln.

But that afternoon, gathered in the emergency operations room in the basement of the old police station, now called the 233 Building, they listened to reports on the Salt Creek downstream gauges and saw “with our own eyes" what was happening along the creek on Public Works department remote cameras, Casady said.

“We could see a pretty sudden rise, between noon and 2 p.m.,” said Casady.

Around 3 p.m., the group, fearful the water would breach the Salt Creek levies, decided to begin a voluntary evacuation of people, particularly people with mobility issues, living in the North and South Bottoms.

At about the same time, water started to flow across major arterials and commuter routes -- West O, West A and Antelope Valley Parkway -- and those were closed to traffic, Casady said.

West O Street in front of the Runza restaurant, "went from just a little water in it to about the top of a hubcap," Casady said.

The emergency operations plans worked well, he said. And the cameras Public Works purchased in the last few years to monitor traffic flow “proved to be incredibly valuable."

"We were in a windowless room in the basement  but had eyes on several key spots in the city," he said.

The city will have some overtime costs because of the flooding. Lincoln Fire and Rescue brought in 10 to 15 people, most associated with water rescue crews. And police held over the first shift, said Casady said.

So there will probably be a few thousand dollars in overtime, “not giant,” Casady said.

“Probably what we would spend on a football game," he said.

Police and firefighters are living longer, in general, just like everyone else.

But that good news for police and firefighters will cost Lincoln taxpayers who are helping fund the defined benefit police-fire pension fund.

The city’s future pension costs are higher in the 2014 report than seen in past reports, in part because the actuaries are using more recent mortality assumptions.

Those three additional years of pension benefits must be figured into future costs.

Newer, more realistic mortality assumptions are having similar effects on big private companies that still have defined benefit pension plans, where retirees get a guaranteed monthly retirement benefit, usually based on near-retirement earnings.

The new mortality assumptions could weaken the funding status of 400 large U.S. companies by $72 billion, based on consulting firm Towers Watson Co. estimates.

US secures vaccines for every child 5-11

US secures vaccines for every child 5-11

As he begins his third term as Lincoln mayor Monday, here are 20 facts you may not know about him.

If you think the city streets have been going downhill, here’s scientific proof you are correct.

A conversation with Chris and Judy Beutler

Judy Beutler is proud of her husband and all that he has accomplished for Lincoln. “I think he’s really made an effort to pull people together…

Heavy rains in May 2015 flooded fields and roads in Lincoln and throughout southeast Nebraska. Our photographers and readers documented the day.

Sunday brought Lincoln chilly temperatures, overcast skies and the longest night of the year. But for many, the day was all about a light.

Nancy Hicks: There will be two Kaneko towers on the Plains

The University of Nebraska Medical Center has announced the new Buffett Cancer Center will have a sculpture, a Kaneko tower, much like the one…

Aerial view of Tower Square at 13th and P streets, where Mayor Chris Beutler discouraged some youngsters from using sidewalk chalk on the paving bricks recently.

City employees at the emergency operations center were able to watch Thursday as floodwaters rose in Salt Creek, despite being in a windowless room in the basement.