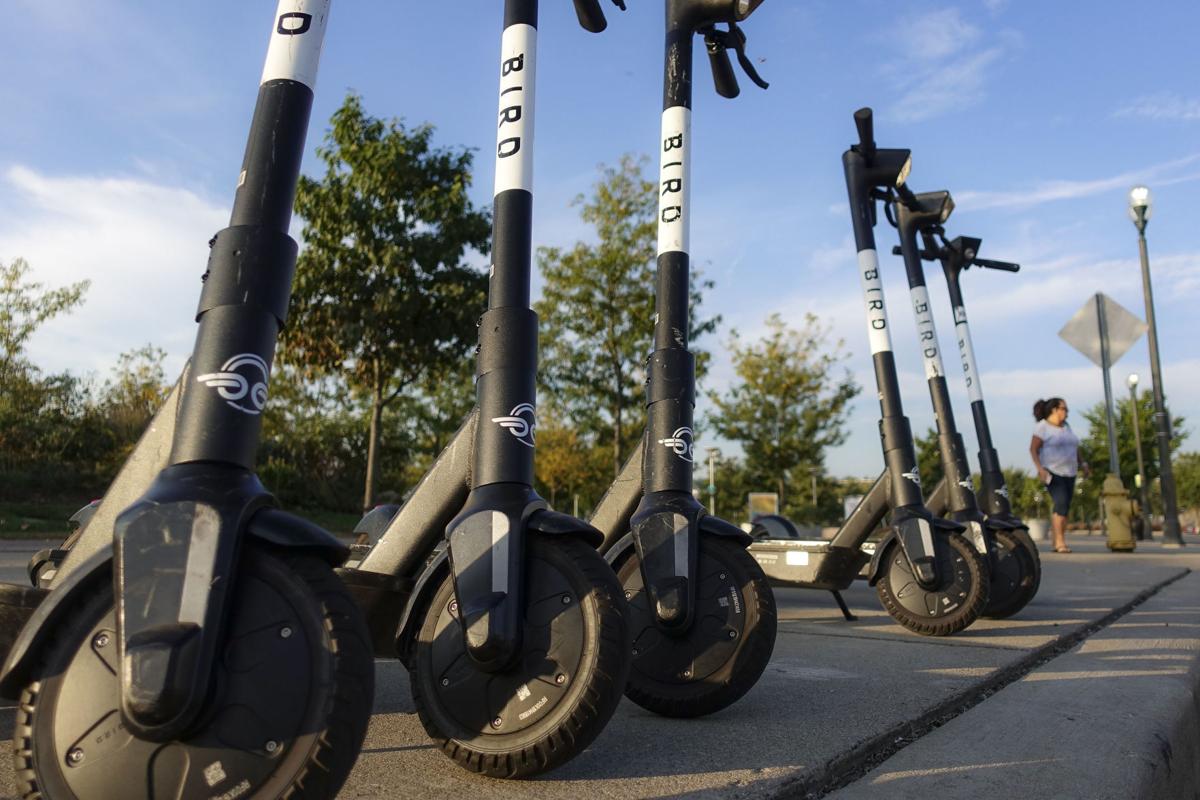 Sharable electric scooters by Bird wait in downtown Cincinnati for pedestrian use last year. Bird is one of two companies that will take part in a pilot program in Lincoln beginning Sept. 1. 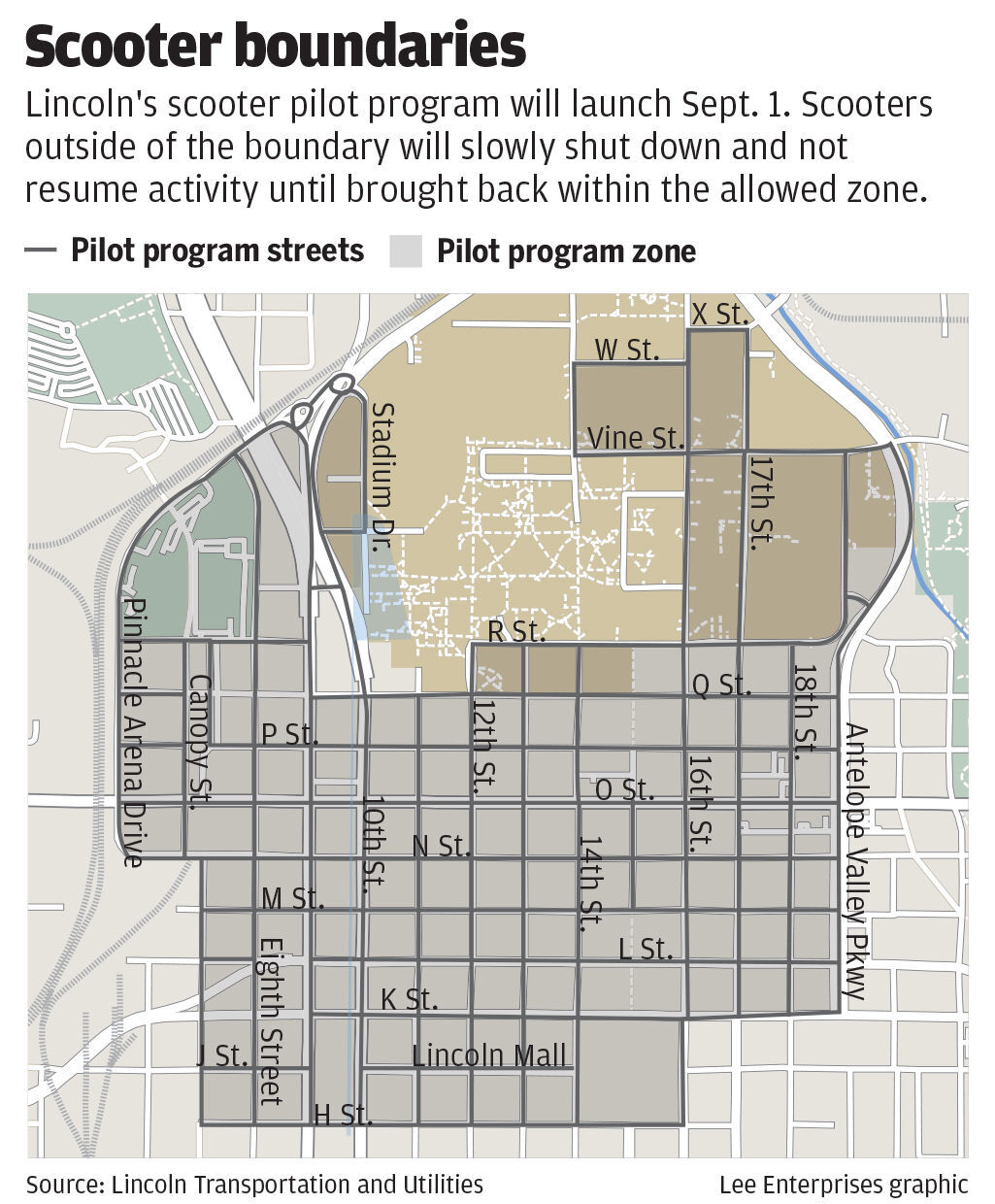 Two scooter companies, Bird and Spin, can deploy up to 250 scooters each in Lincoln beginning Sept. 1 under the program.

But Mark Lutjeharms, who oversees the program for Lincoln Transportation and Utilities, speculates the scooter operators may not start with their full allotment.

Authorized by city officials in September 2019, the pilot program was postponed because of the pandemic. Lutjeharms said with motor vehicle traffic down citywide since the pandemic began, the launch may give motorists and scooter riders downtown a less-crowded chance to become accustomed to each other on the streets.

"It is a good opportunity, with volume being down, to introduce it at this time," Lutjeharms said.

The city, along with Bird and Spin representatives, plan a demonstration event Saturday in the West Haymarket during the Farmers Market to show people how they can ride the scooters safely, he said.

During the pilot program, riders can use the scooters between 7 a.m. and 10 p.m., and their use can be restricted during severe weather, police emergencies, by directed health measures and on Nebraska football home gamedays, under the agreement.

Bird, Lime and Spin scooters were supposed to activate their scooters April 1, but Lincoln Transportation and Utilities Director Liz Elliott pushed back the start date.

Lime, the third vendor approved for the project, withdrew from the program, Lutjeharms said.

Bird and Spin have deployed their scooters in Omaha's second pilot program to allow the devices on city streets there this year.

During its first pilot program, Omaha recorded more than 200,000 trips, but police warned and ticketed dozens of riders in the first month for riding on the sidewalk.

Riding on the sidewalk will also be illegal in Lincoln. The scooters must be ridden in the traffic lanes or marked bicycle lanes.

"However, we will, as always, focus on education as the scooters make their way into downtown," Spilker said.

Scooters riders must be 18 years old and obey all traffic rules, Lutjeharms.

City ordinance doesn't require helmets, but they are encouraged, he said.

Both Spin and Bird have agreed to distribute at least 100 free helmets during the program and also offer discounts for helmet purchases, Lutjeharms said.

During the program, which ends Aug. 31, 2021, the companies will need to report usage data to the city, and based on per-scooter daily trips, the city can raise or reduce the number of scooters they can operate, Lutjeharms said.

Users can locate them using the companies' mobile apps, and can ride them around in the zone generally bound by Pinnacle Arena Drive on the west, Antelope Valley Parkway on the east, the University of Nebraska-Lincoln on the north and K and H streets on the south side, he said.

Scooters driven outside that zone will gradually slow to a stop and not operate until returned to the zone because of geofencing technology active in the scooters, he said. And problem spots arising within the allowed zone can be addressed using the same technology if the city encounters problems.

At the end of a ride, the driver is expected to park the scooter off the street on the edge of the sidewalk, typically where parking meters are found, he said.

The council's budget vote follows an atypical budget year for city officials, who would have passed a two-year spending plan if the city weren't in a pandemic.

On Saturday the city hosted a safety demonstration in the Haymarket to give people a glimpse of the scooters and outline their rules of operation.

Voters in Lincoln will be able to ride in style to the polls on Election Day, when downtown scooters and bike vendors will be offering free transportation options.

Sharable electric scooters by Bird wait in downtown Cincinnati for pedestrian use last year. Bird is one of two companies that will take part in a pilot program in Lincoln beginning Sept. 1.