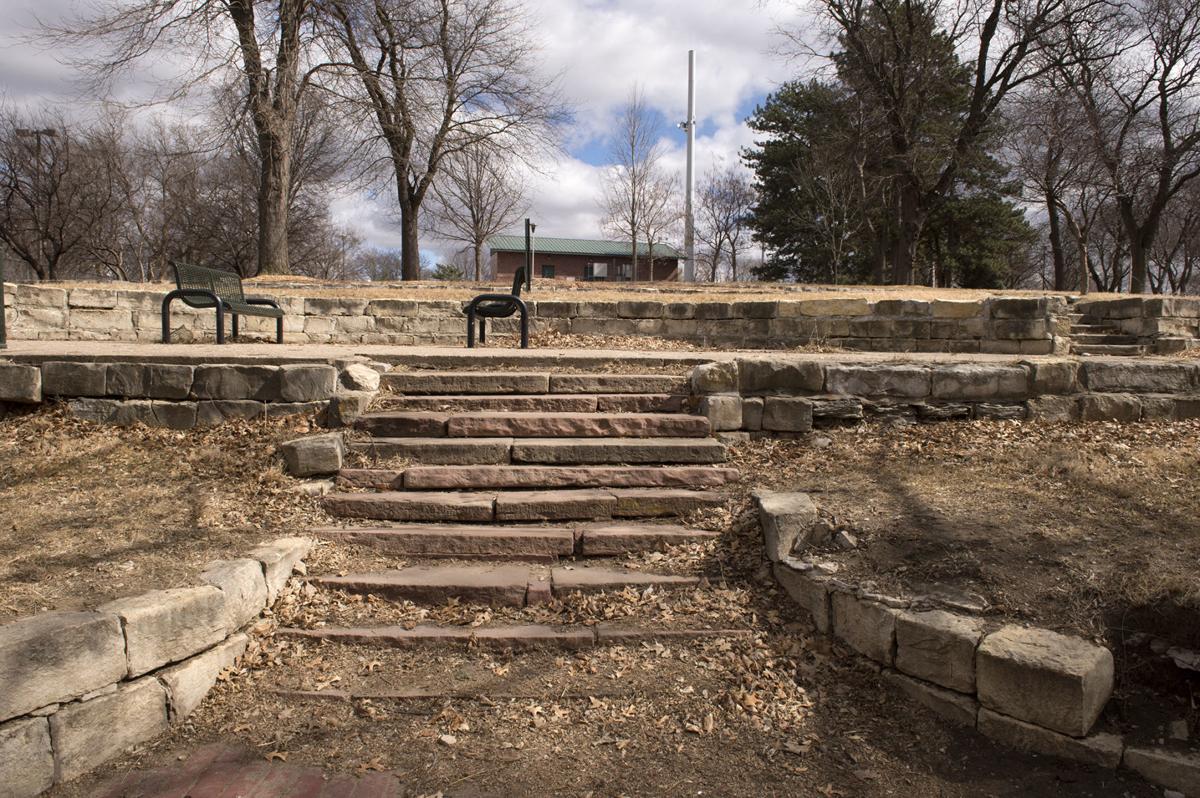 Stone walls and steps lead into Cooper Park on its west side. 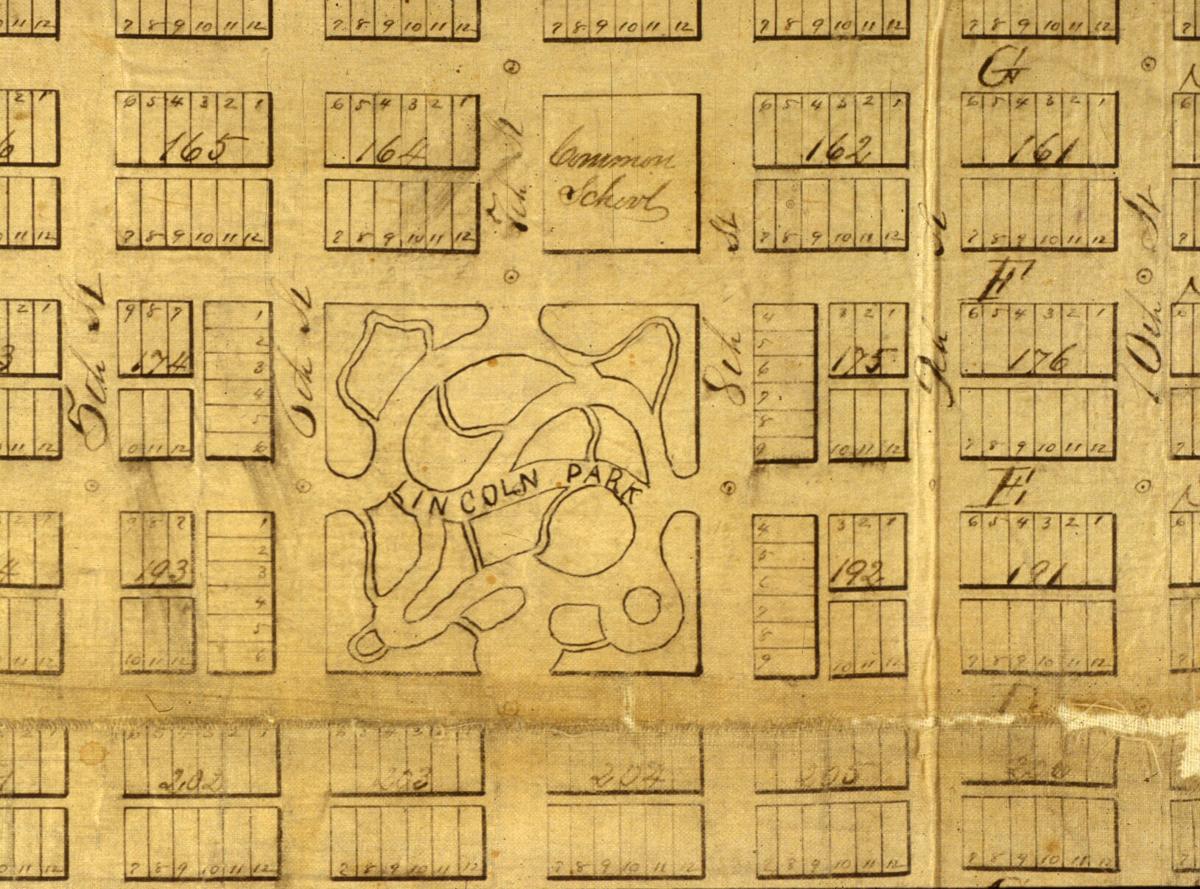 Cooper Park is Lincoln’s first park, and appeared in the city’s original plat. 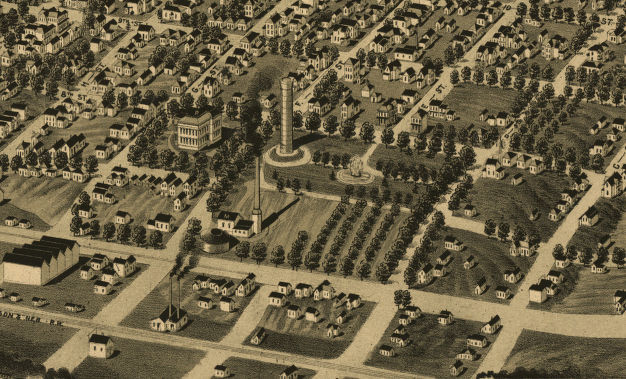 For an aerial drawing in the late 1880s, an artist depicted rows of trees filling the park. In reality, the city failed at its early attempts to grow trees, and neighbors grazed their cows in the field. 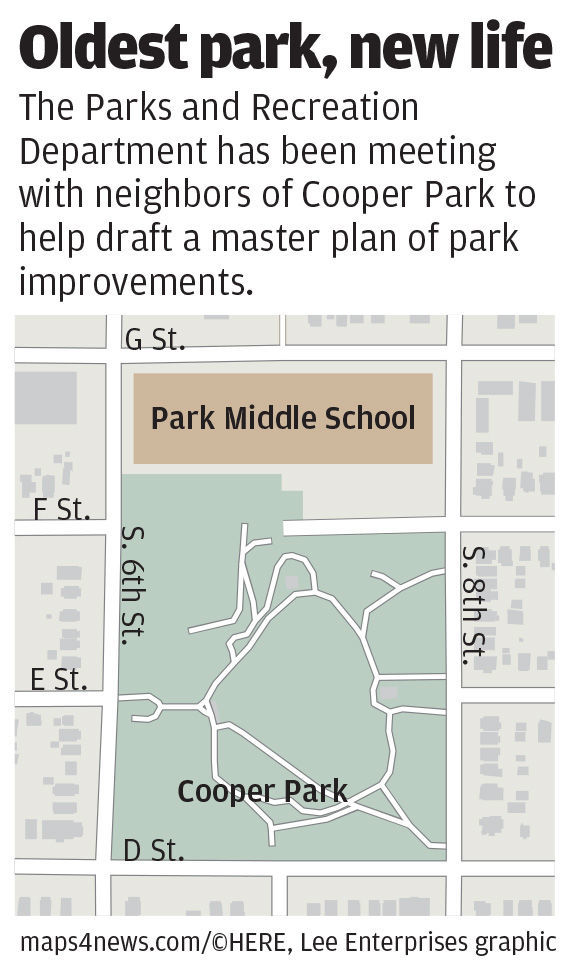 The trees planted by the city’s earliest leaders didn’t take. Then the well they envisioned supplying their new community failed.

They couldn’t settle on a name, either, calling it City Park and Lincoln Park and F Street Park. It was redesigned at the turn of the last century, and again 50 years later, when it became Cooper Park — an oasis surrounded by residential density, serving the neighborhood’s children and families and students at nearby Park Elementary School.

But it would suffer from a lack of maintenance. Retaining walls grew unstable. Playground equipment grew outdated. The park’s lighting dimmed, and Cooper Park became a target of vandals and other criminals. Lincoln police have logged more than 150 visits there in the past five years, for crimes ranging from arson to alcohol to assault to graffiti.

Now, on its 150th anniversary, the park is again getting attention. Brought together by NeighborWorks Lincoln, the city and Cooper’s neighbors have been meeting for nearly two years, creating a master plan to identify its immediate needs and create a long-term wish list.

The process is nearing its end. The Parks and Recreation Department will meet with neighbors Thursday to share ideas and listen to new ones, and should release its final plan in the next few months, said J.J. Yost, the department’s planning and construction manager.

The document will guide the future of the city’s original park, in a city that has changed in 150 years.

“It’s right in the middle of a very densely populated neighborhood and a neighborhood today that has quite a bit of ethnicity,” Yost said. “The park gets a lot of different and varied uses. The goal behind the master plan is to increase the opportunities for recreation to that immediate neighborhood.”

But the process also started something. The South Salt Creek Neighborhood around the park had lost some of its cohesion, and the focus on the park is pulling it back together.

The park appeared in the city’s first designs, drawn in 1865 — two years before Lincoln became Lincoln. A blank spot on a map, four square blocks from D to F, Sixth to Eighth.

“It kind of reflects the evolution of what a park is,” said Ed Zimmer, the city’s historic preservation planner. “They put it on the original plat, but they aren’t quite sure what to do with it.”

So in the meantime, it became a pasture. Nearby residents often kept cows, and they’d turn them loose in the field, Zimmer said.

Early attempts at planting trees failed time and again, he said. So did the waterworks built in the 1800s, in the park’s northwest corner. “That’s what happens when you drill into the salty ground.”

But then, in 1900, the Ladies’ City Improvement Association hired Jens Jensen to redesign the park. Before he came to Lincoln, he’d created parks in Chicago. Later, he designed landscaping for the Ford family, including Henry and Clara Ford’s 1,400-acre Fair Lane estate.

“He was a big deal,” Zimmer said. “Sort of the Frank Lloyd Wright of landscape architecture.”

Pieces of the park still reflect Jensen’s vision — like the winding paths — but some of it was replaced a half-century later, when the Cooper Foundation’s $35,000 gift gave the park a picnic shelter, playgrounds, a better ballfield, an ice-skating rink and yet another name.

As the decades piled up, the city’s maintenance budget didn’t keep pace. “Over the years, it’s been renovated several different times,” Yost said. “Some of the existing infrastructure is aged and deteriorated and just worn out.”

The focus on the park rekindled a few years ago, when NeighborWorks was considering building Cooper Commons, a seven-home project on a vacant lot a half-block away.

It met with neighbors to get their thoughts on the development. “But also, when NeighborWorks moves into an area, we don’t want to just start building housing, we’re about revitalizing areas,” said Pat Anderson-Sifuentez, the nonprofit’s community builder.

In those discussions, the park came up over and over again, she said. “They felt it was underutilized; they did not feel it was very well maintained.”

She arranged an initial meeting between parks staff and residents, and they took a night walk through the park last summer, where they identified — and rectified — lighting issues. The city replaced light bulbs and trimmed trees to brighten the paths.

Those are minor but important improvements.

The city hosted an open house in September to seek input on some of its plans. More than 30 nearby residents attended, she said, an impressive turnout in an area that let its neighborhood organization go dormant a few years ago.

But now it’s waking back up, and the timing is good. The development moving south through the Haymarket will ultimately put pressure on the neighborhood, Anderson-Sifuentez said.

“South Salt Creek really needs to be organized to have a say in how their neighborhood is going to evolve.”

A group of residents, many of them members of the old organization, met Monday to elect a new board, and they’ll select officers next week, said longtime resident Gary Irvin, who was active on the old board and is part of the new group.

“It’s a formative year, getting the word out that everything is starting back up,” he said. “This neighborhood has really never been as close as some of the other neighborhoods.”

Irvin hopes the reborn organization fosters unity, so neighbors get to know each other. He also worries about downtown’s slow march toward his neighborhood, and he wants to make sure the park’s importance is preserved.

“There’s a lot of history here and we don’t want to lose that,” he said. “It needs to be kept for some of the later generations.”

The city isn’t planning a major facelift for Cooper Park.

At the meeting Thursday, Yost will release a two-tiered draft of its master plan — a list of the park’s pressing needs and the broader changes the department could make in the future, money permitting.

On the first list: continue to improve lighting, replace roofs on the bathroom and picnic shelter, and address the eroding retaining walls.

Neighbors are fond of the ledges, but some are too unstable to save, Yost said.

“There are so many retaining walls in that park, and that’s a very costly item to address,” he said. “The master plan is looking at a proposal to have some of those eliminated.”

That last proposal is more complicated, Yost said. Cooper’s baseball field is used for league play, and the department would have to add a diamond somewhere else to accommodate demand.

The city will work with residents to prioritize the plans, he said, with the neighborhood responsible for some of the fundraising. And soon, the park should restore some of its pride.

“Cooper Park is important to maintain,” said Shawn Ryba of the South of Downtown Community Development Organization, which is hosting Thursday’s meeting. “There’s no green space in that area, so we have to take care of what we have.”

The city’s Parks and Recreation Department will share its draft master plan for Cooper Park -- and ask for input -- at a meeting at 5 p.m. Thursday at the F Street Recreation Center, 1225 F St.

The meeting will be hosted by the South of Downtown Community Development Organization, and is the inaugural event of its Reclaim Your Neighborhood series of community forums.

See photos of Cooper Park in the South Bottoms.

Simon Brockmeier has spent all eight years of his life going to his neighborhood park, Bishop Heights.

The city now has firmer plans and conceptual pictures of the roughly $1.2 million link between one of Lincoln's busiest bike trails and one of…

Based on what they've learned from other cities, Lincoln leaders know that all untreated ash trees here will be dead within 15 years once the …

DENTON — They still call it the Lettuce Patch, because this corner of the field can grow anything.

Of all the books James Seacrest accumulated over the decades, Gatsby was the greatest.

Before it turned too cold, Jose Lemus spent the late fall and early winter knocking on door after door in north Lincoln.

Nonprofit asks neighborhood: What should we do with this problem property we’re buying?

Vacant for more than a decade, the house at 1105 E St. isn’t much more than a hollow shell with a buckling basement, mismatched siding and fru…

With 2 ballfields taking shape, next southeast Lincoln park project could be 32 pickleball courts

Bill Roehrs was introduced to pickleball eight years ago when he was visiting some friends in Arizona.

The first and second floors of 1105 E are all bare studs, exposed electrical wires, spongy floors that sag beneath your weight and the black s…

A neighborhood potluck celebration is scheduled at the city's oldest park, Cooper Park, from noon to 4 p.m. on June 30.

Stone walls and steps lead into Cooper Park on its west side.

Cooper Park is Lincoln’s first park, and appeared in the city’s original plat.

For an aerial drawing in the late 1880s, an artist depicted rows of trees filling the park. In reality, the city failed at its early attempts to grow trees, and neighbors grazed their cows in the field.