One of every three Lancaster County homeowners who protested their property's valuation last year had their value reduced, according to a Journal Star analysis.

The median percentage decrease for those lowered assessed values was 16 percent.

Residential property accounts for two-thirds of all the real property in the county, and valuations for 2019 determined in March rose about 10% for homes, the Lancaster County Assessor's Office said.

Earlier this month, nearly 100,000 property owners were notified their valuation had changed and informed of the protest process.

Property owners have until July 1 to file a protest with the Lancaster County Clerk's Office to challenge their valuation.

High valuations could mean higher property taxes for homeowners should taxing authorities such as Lincoln Public Schools, the city of Lincoln and Lancaster County keep their tax rates unchanged in 2020.

Overall last year, about two of every five protests — including residential and commercial property and ag land — resulted in a reduction, the Journal Star found.

Following the protest process, the total valuations dropped by $64.1 million, according to the 2018 Lancaster County Property Valuation Protest Report.

Protests of the values assigned for improved commercial property accounted for the majority of the cases, but only about one of every five protests in that category saw a decrease in valuation, the Journal Star found.

Referees who will examine protests this year say people challenging their valuation must bring more than just their disgust for the higher number to support an adjustment.

"The more information that a property owner can bring to support lowering the property value the better," said referee John Wurdeman, who has been appraising real estate since 1985.

Recent appraisals done as part of a refinancing can be key pieces of evidence to support a reduction, he said. Photos of a property showing major damage that would necessitate a lower value also are a help.

When property owners have evidence of a valid market value sale of a comparable property that maybe wasn't recorded or accounted for during the assessor's valuation, that can be crucial in a protest hearing, Wurdeman said.

Ultimately, referees are evaluating whether the property could be sold for the amount it's valued for, said Wurdeman, who has been a referee for the past three years.

These referee hearings, which take place at the Lancaster Event Center, aren't always the first times a valuation gets scrutinized.

Before County Assessor Rob Ogden finalized valuations in March, his staff held about 7,200 meetings with property owners concerned about their valuations.

Not everyone takes that route though, Ogden said.

"Some of those avoid talking to us because they believe they won’t get anywhere,” he said.

Referee Marilyn Tabor said sometimes she's met people who protest formally because they're afraid to talk to the assessor's staff or let them see their house.

Successful protests she's seen in her 10 years as a referee in Lancaster County have often come down to outdated or incorrect information incorporated in the assessor's model, she said.

For example, she recommended an adjustment for the value of ag land once because it was assessed as if it were producing crops but in fact it wasn't being farmed and was instead in a conservation program, Tabor said.

She often referees cases where the owners just seem to be venting and don't have evidence she can use to reassess the county's figure, she said.

But if they don't have evidence, the case is open-and-shut, she said.

Many people upset with their valuation are thinking about its effect on their tax bill and not the increase in appreciation of their real estate, because most people aren't looking to sell, Tabor said.

After weighing the referee's recommendation, the Lancaster County Board, which sits as the County Board of Equalization, decides final values by Aug. 10.

If a property owner is still unsatisfied with the valuation, they can appeal to the Nebraska Tax Equalization and Review Commission.

The value of Tabor's home rose this year, and she thought about protesting the valuation, she said.

But then she took a closer look.

"Well, I guess I don’t have anything to support a lower value, so too bad for me," Tabor said.

To protest your valuation online, go to lancaster.ne.gov/clerk/prop.htm.

What's coming from your wallet

How to file a protest

All protests must be postmarked or received by the office at 555 S. 10th St. by July 1, and online filing begins Saturday.

Online protests can be filed at https://lancaster.ne.gov/clerk/prop.htm.

The protests must include the reason for the protest, a legal description of the property, signature and the date.

Protesting property owners filing online can attach supporting documents, or they can be faxed, mailed or hand-delivered to the office.

For more information on the protest process, go to Lancaster.ne.gov/clerk/pvptime.htm.

Lancaster County property owners unhappy with the county's valuation of their home, business or land can formally challenge it beginning Saturday.

The Legislature was assured Thursday of another opportunity for property tax relief debate when Sen. Tom Briese of Albion filed proposed amend…

Five of the 11 candidates vying to be appointed to the open Lancaster County Board seat were named finalists Monday.

Christa Yoakum was appointed to the Lancaster County Board on Tuesday by a special committee consisting of the county attorney, clerk and treasurer.

One of Lancaster County's largest taxpayers gets $26 million reduction

Most home values in Lancaster County will remain unchanged this year, but the county assessor will be revaluing some commercial land to match … 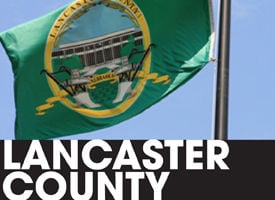