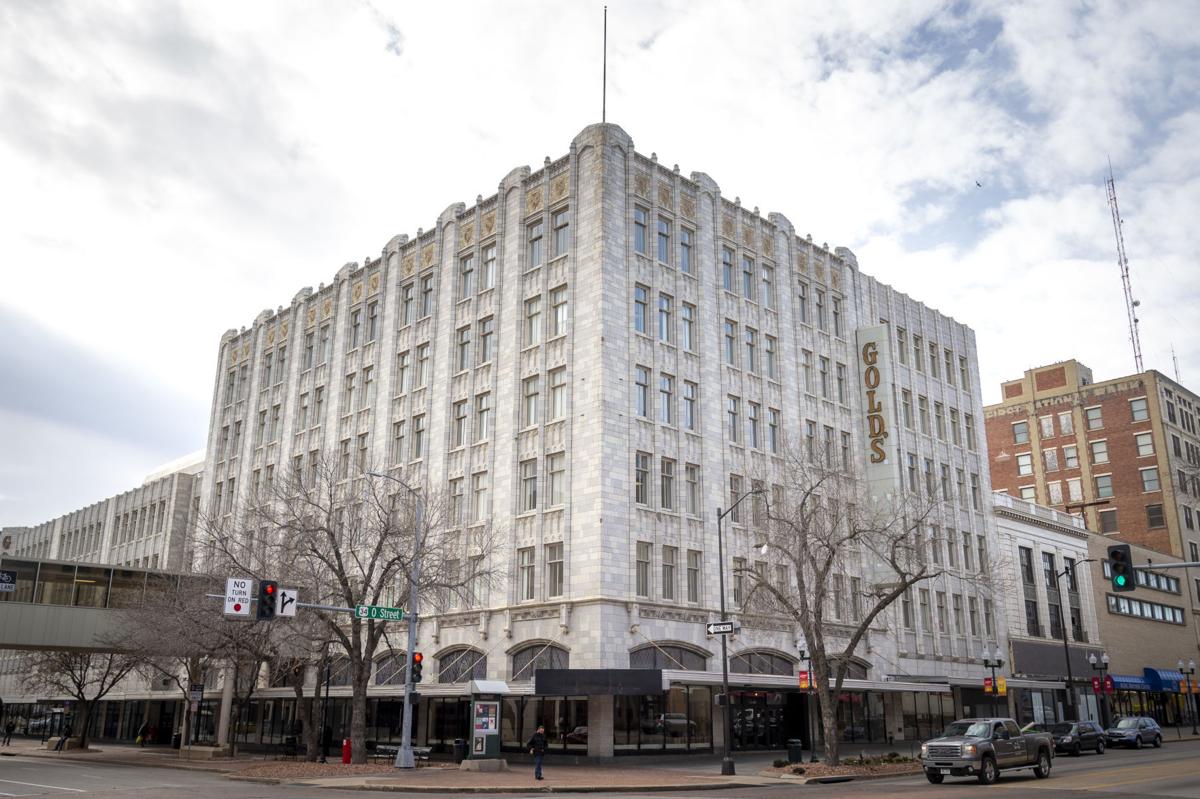 A redevelopment plan to create about 180 mostly one-bedroom units and renovate the first floor of the Gold's Building has died. 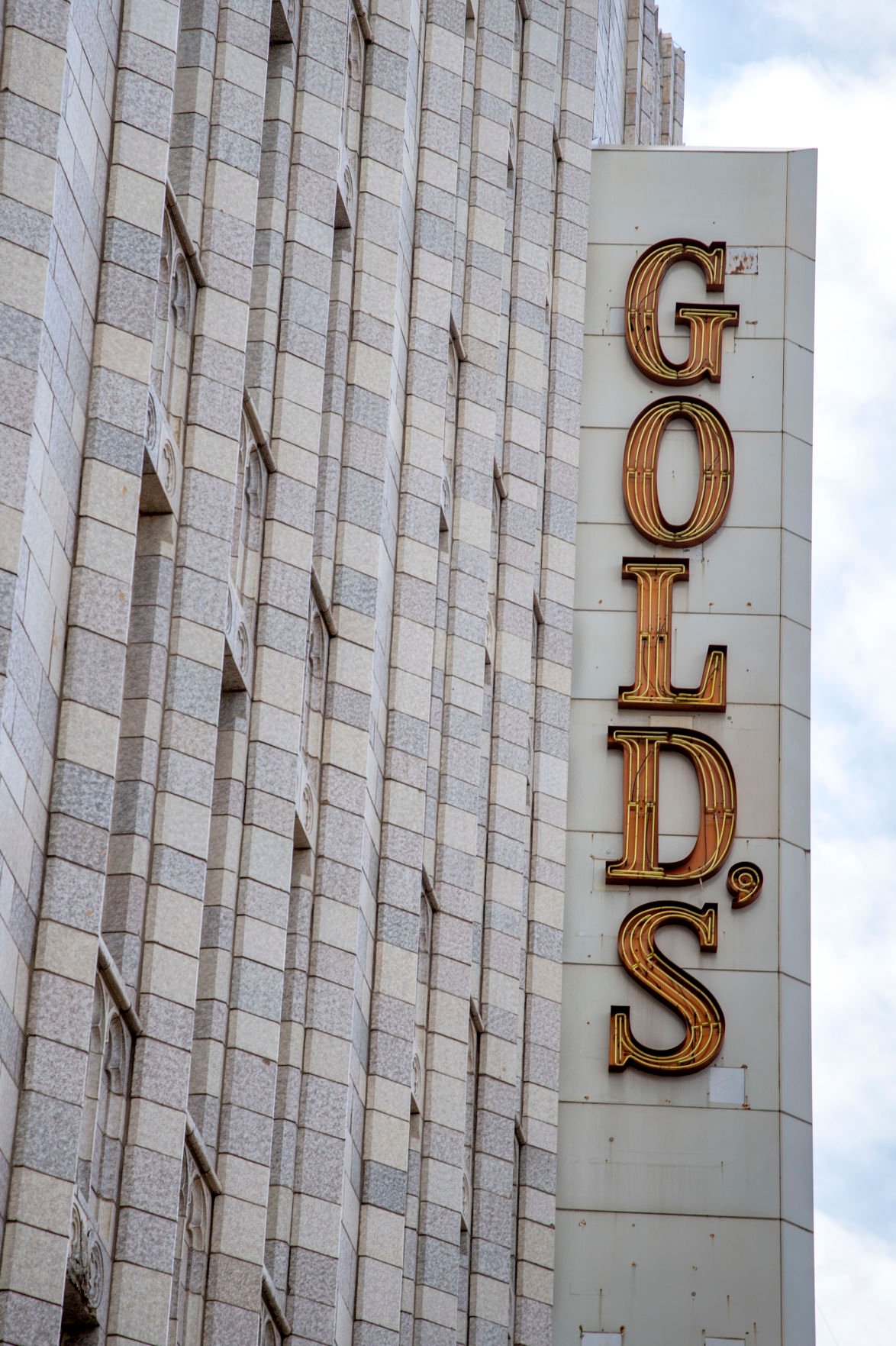 The exterior of Gold's Building is seen from O Street.

The owner of the Gold’s Building -- the once venerable downtown department store anchoring 11th and O streets -- says he plans to demolish the building after the latest redevelopment plans fell through.

“Two things happened that will cause the building to be demolished,” said Gerard Keating, a Nebraska native who bought the building in 2019. “One, the city refuses to relocate its derelict, unpoliced, filthy bus transfer station, ... (and) the National Parks Service (which administers historic tax credits) rejected a request to put windows on the south facade. It’s ridiculous.”

In May, the City Council approved a $50 million redevelopment agreement to turn the building into apartments and first-floor commercial space, including authorizing $6.1 million in tax-increment financing for what would have been one of the largest apartment projects in downtown history.

Jeff McMahon, a University of Nebraska-Lincoln graduate who has his own real estate company in the Kansas City area, negotiated the agreement with the city and planned to buy the building from Keating, who owns Keating Resources.

The plan would have created about 180 mostly one-bedroom units, renovated the first floor for commercial use, the rooftop into amenities for residents, and the basement into storage for building residents or businesses.

Developers also would have razed a vacant building next door at 1023 O St. to create a small park or open space for residents and the developer would have taken over use of the skywalk leading to the old Centrum parking garage, where 220 stalls would have been reserved for residents.

The problem: McMahon needed historic tax credits to help pay to add windows to the south side of the building. The National Park Service, which administers the program, said no.

When that happened, McMahon didn’t go through with buying the building. Keating said it remains on the market but he doesn’t think anyone will buy it because of the bus transfer area on 11th and N streets along the sides of the building and because the parks service won’t allow windows on the south side of the building.

“Thanks to that, it will end up in the dump, like many historical buildings, and that makes me sad,” he said.

Keating Resources bought the building in December 2019 for $2.3 million, and announced plans for a 110-room hotel and remodel of the four-story south portion of the building for the tenants, which were state offices.

Then the pandemic happened, and its effect on the hotel industry led the company to rethink its plans and put the building up for sale in November.

Dan Marvin, the city’s urban development director, said after Keating bought the building the city negotiated with him in an effort to compress the amount of space used for bus transfers so it wouldn’t impede the entrance to the planned hotel.

There are numerous Federal Transportation Administration guidelines the city must follow to move a transfer station, either temporarily or permanently, which has complicated the issue, Marvin said.

Negotiations with Keating went dormant after the pandemic closed everything down, and when they started up again, they were with McMahon, Marvin said.

Part of the new redevelopment deal that the city had worked on with McMahon was to use $500,000 in TIF to raze the old police station at 233 S. 10th St. to make way for a bus transfer station. When he didn't get the historic tax credits and the redevelopment deal fell through, that TIF money was no longer available.

Marvin said the city needs a grant to build a transfer station, which it has wanted for years. It has applied for a grant, but it hasn't heard yet whether it's been approved. Two other grant applications were unsuccessful.

Keating doesn’t believe the transfer station is necessary and is angry the city won’t agree to move the transfer lanes away from his property. People urinate and defecate on the sidewalk because there are no bathrooms, and the area isn’t policed, he said, and he spends $4,000 a month steam-cleaning the sidewalks.

“Instead of focusing on providing a safe, clean transfer station, they want to build a Taj Mahal where people will buy $5 lattes,” he said.

Marvin said it’s possible the building could sell, noting that Keating bought the building with the transfer station there and no windows on the south side.

Demolishing the building for a surface parking lot would be an expensive venture, Marvin said, saying similar demolitions of large buildings have cost millions.

“It would be a very expensive parking lot,” he said.

Marvin said it’s not all that unusual for projects like this to fall through, noting that plans for the Journal Star building and one at Ninth and O streets initially fell through but both are on track with new projects.

Plans to buy the Journal Star building at Ninth and P streets and turn it into apartments, offices and commercial space fell through when the developer couldn’t secure financing, but now an Indiana company plans to demolish the building and build a 13-story apartment building.

The Holiday Inn Express soon to open at Ninth and O streets wasn’t the first project slated for that corner, Marvin said, but came to fruition after the first plan fell through.

“Absolutely we are disappointed,” Marvin said about the Gold’s project. “I think the better course of action would be to save the building, but I’m not the owner of the building.”

Todd Ogden, president and CEO of the Downtown Lincoln Association, said he’s also disappointed but remains hopeful that the owner can find a developer that can make it work. There are developers looking for space for downtown residential projects, he said.

“The redevelopment plan was perfect,” he said.

It fit well with the downtown master plan, and Keating has already made improvements to the building and had a vision for it. Other projects in downtown, including plans to rehab the Atrium, will help spur other development, he said.

Cindy Lange-Kubick: Back when cars were made of metal - remembering Gold's department store, Sept. 19, 1999

Back when cars were made of metal and all the men wore hats.

A portion of the tax-increment financing approved for the Gold's Building redevelopment will pay for demolition of the old police station, but the city still must get a federal grant for the project.

The City Council approved tax-increment financing for two multimillion-dollar downtown high-rise apartments, one in the Gold's Building at 11th and O streets, the other at 14th and N streets.

The pandemic has scuttled plans for a hotel in the building at 11th and O streets. It's now likely to be redeveloped into apartments.

The current developer, who scrapped a proposed hotel, has a deal to sell the building to Jeff McMahon, who plans a $35 million-$40 million apartment project.

The records will be moved to the Nebraska State Office Building at 301 Centennial Mall South on Aug. 2.

"I will almost guarantee the forecasting board will take care of the deficit" by raising revenue projections, State Sen. John Stinner said.

The City Council on Monday approved zoning changes that are part of the South of Downtown Redevelopment and Strategic Plan, designed to promote home businesses and other services to revitalize the area.

The city will raise water rates by 6% and wastewater rates by 4% -- an average increase of about $4 for Lincoln residents -- as part of the mayor's budget.

The 20-story condo building being built at 11th and Q streets is in line to get more than $5.7 million in tax-increment financing.

Downtown Lincoln Gold's building to be sold to local investor

It's unknown at this point what the plans are for the Gold's Building at 1033 O St. after previous attempts at redevelopment fell through.

A redevelopment plan to create about 180 mostly one-bedroom units and renovate the first floor of the Gold's Building has died.

The exterior of Gold's Building is seen from O Street.