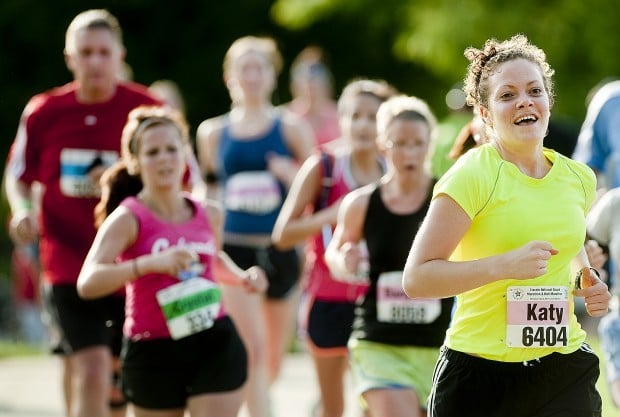 Katy Dornbos (right) runs along the Boosalis Trail near 33rd Street during the 2012 Lincoln National Guard Marathon. A recently widened trail between 27th and 48th streets will allow four people to run side by side rather than in threes. 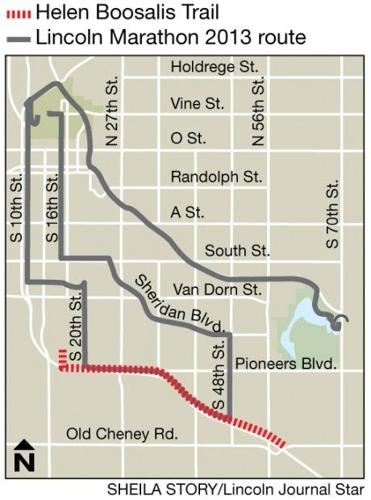 A $300,000 grant, paired with matching funds, will allow the Helen Boosalis Trail to be widened and make room for up to 5,000 more runners in the annual Lincoln Marathon.

The money will demolish the old trail and make a new one two feet wider than the current 1.75-mile-long trail along Nebraska 2 from 27th to 48th Street.

Runners tend to bottleneck on that portion of the course, according to race officials.

The new 10-foot width could allow the marathon to grow to 15,000 runners in future years. The race has been capped at 10,000 participants.

The tourism grant comes from lodging taxes paid by people who stay in hotels and motels in Lancaster County. The county's Visitors Promotion Committee makes recommendations to the Lancaster County Board on how to spend the money.

The board, which has given preliminary approval, will vote officially in April. Then, Mayor Chris Beutler has to approve the funding, too.

The Lincoln Track Club, which organizes the marathon, the Great Plains Trail Network and Nebraska Trails Foundation are providing matching funds of $150,000 while the city will provide another $50,000 to cover the total $500,000 cost, according to Terry Genrich, trails manager for Lincoln Parks and Recreation.

Once the funds are approved, an engineering firm will be hired and construction is slated to start after the May 5 race with the intent of having it done this fall, Genrich said.

A Visitor's Promotion Committee grant for the full $495,000 was denied in 2011 because the committee wanted to see solid data on the marathon's effect on the city economy. They also wanted other funding sources.

Officials have capped capacity there because of the cramped space along the trail. This year's race sold out in less than 16 hours.

Officials either had to widen the trail or get approval to take over a lane of Nebraska 2 to expand the race.

The marathon is an economic driver for the community because organizers estimate 66 percent of runners come from outside of Lancaster County and 14 percent come from other states.

Most of the runners who travel from outside of the area come in the night before and patronize hotels, restaurants and retail shops.

Lincoln Chamber of Commerce President Wendy Birdsall said the trail expansion is an investment that will more than pay for itself over time.

"The event gives Lincoln great national exposure because runners know the course is world-class, the atmosphere is fun and it serves as a qualifying race for even bigger venues like the New York City and Boston marathons," Birdsall said.

County commissioners approved a $300,000 grant from tourism funds Tuesday that will help widen the Boosalis Trail and allow the Lincoln Marath…

That was fast -- Lincoln Marathon and Half-Marathon registration full

Registration opened for all runners at midnight Friday and sold out by 3:35 p.m. All 10,000 spots in the Lincoln Marathon are filled. This is the quickest that registration has closed. “I just cannot believe this,” said race director Nancy Sutton.

Katy Dornbos (right) runs along the Boosalis Trail near 33rd Street during the 2012 Lincoln National Guard Marathon. A recently widened trail between 27th and 48th streets will allow four people to run side by side rather than in threes.