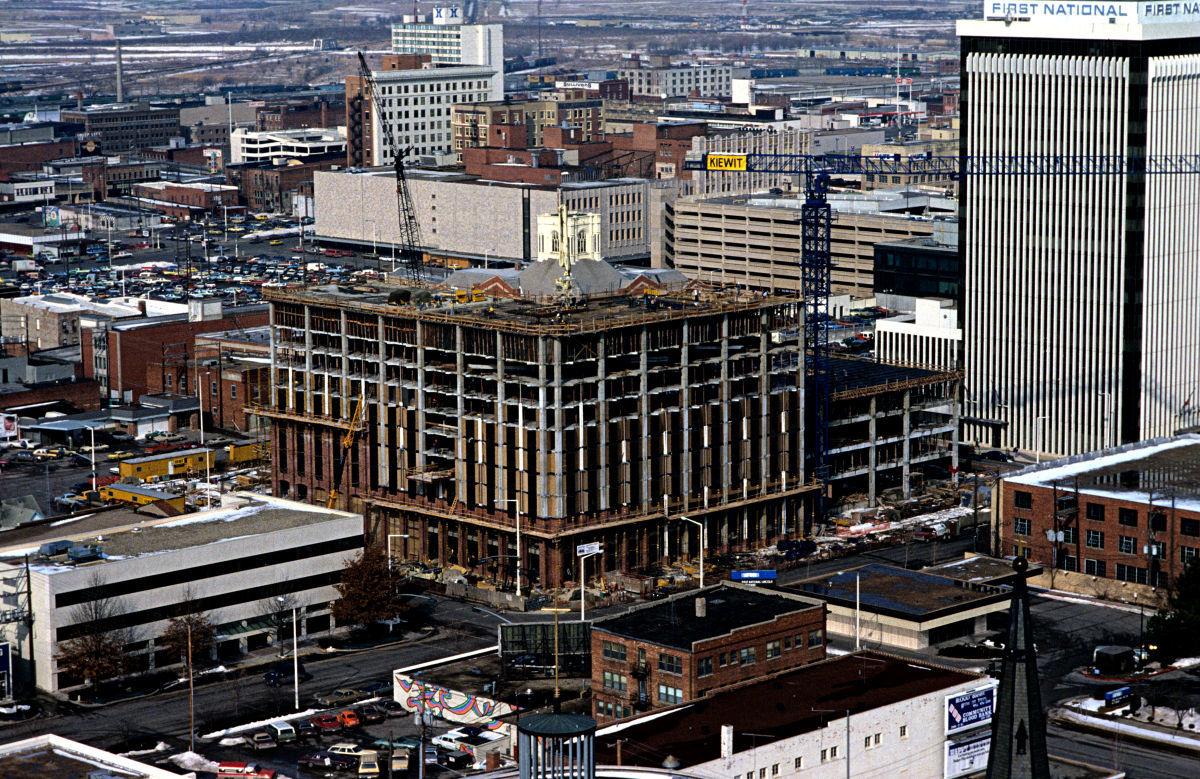 The new Cornhusker Hotel went up in 1982, its construction representing the first tax-increment financing project in Lincoln history. 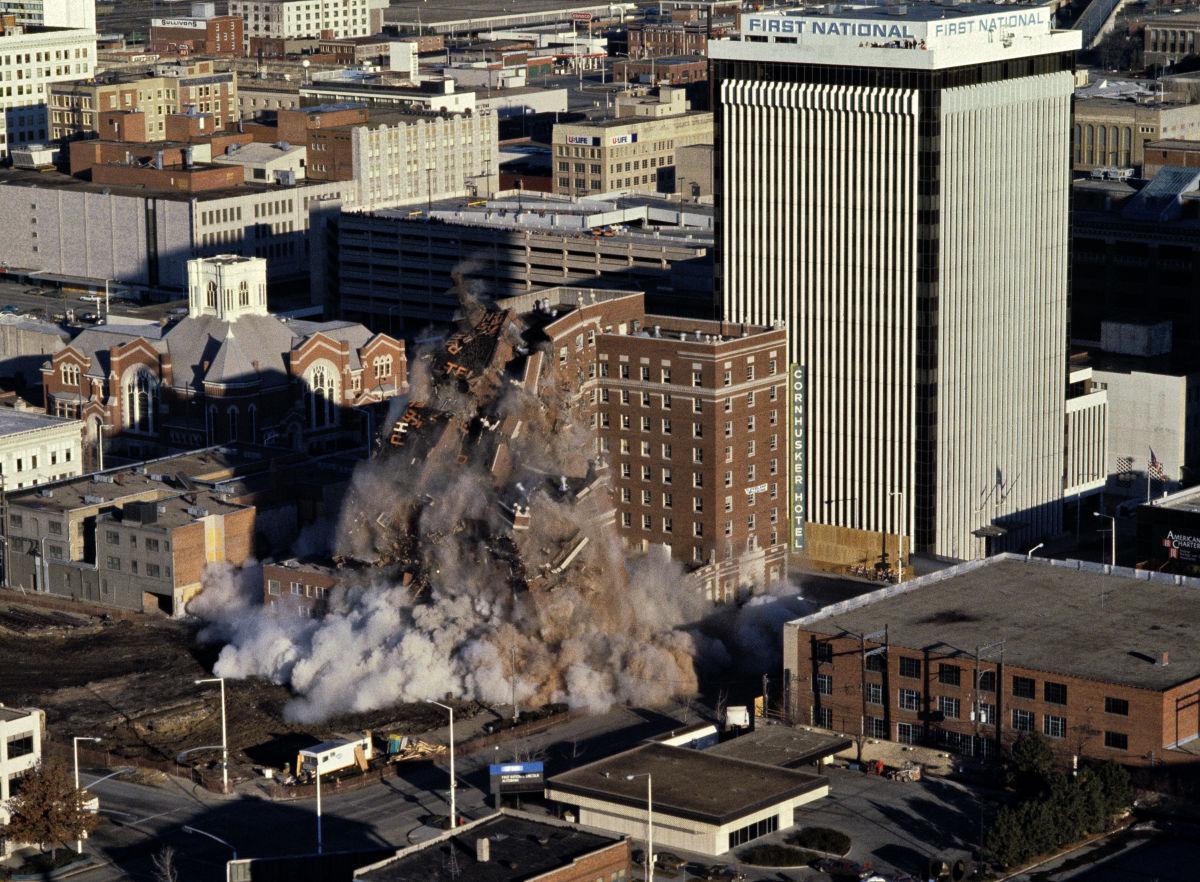 The original Cornhusker Hotel was demolished in an implosion on Feb. 20, 1982, years after it closed to the public. 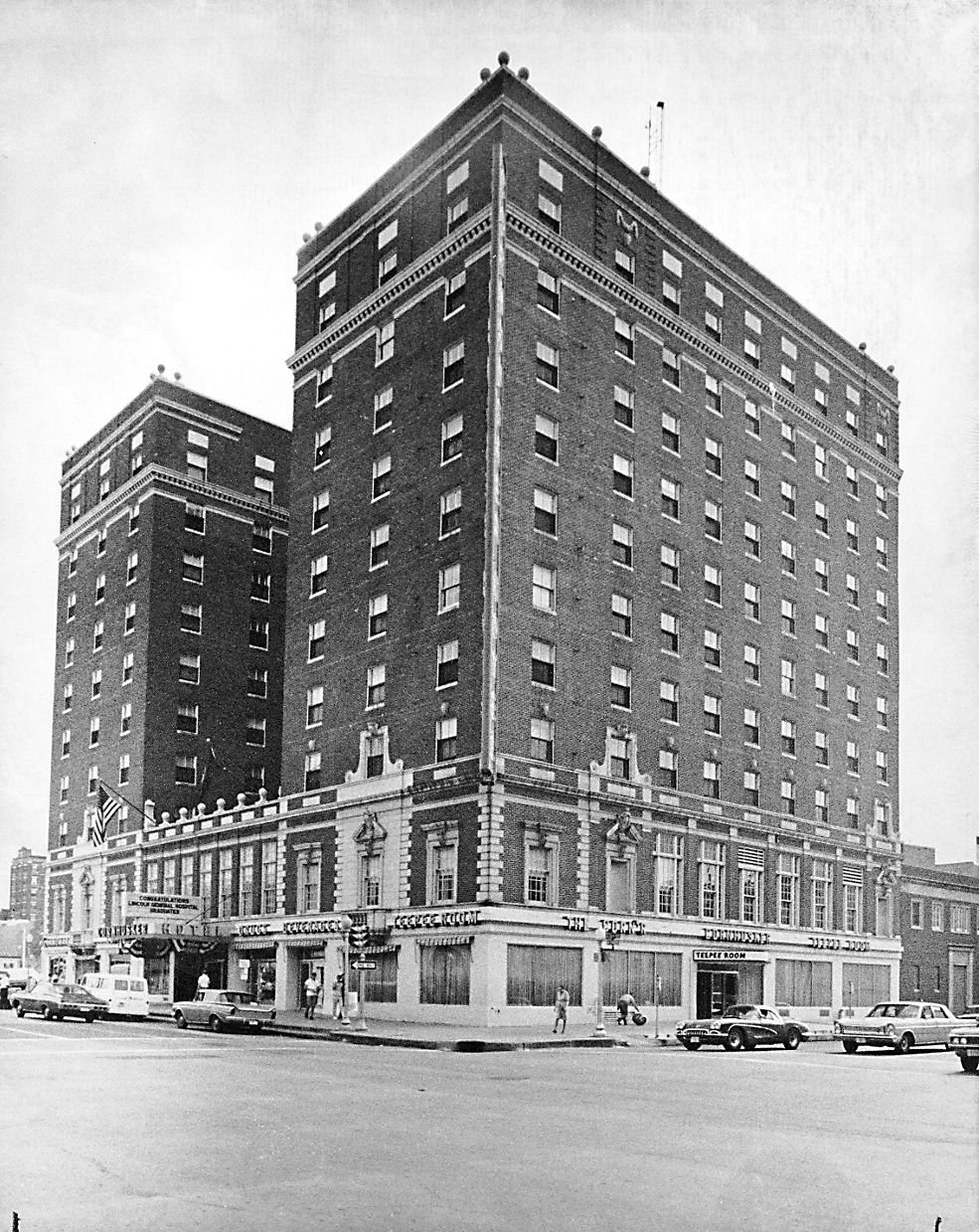 The two Cornhusker hotels that have stood at the corner of 13th and L represent almost a century of Lincoln history and hold a special place in the memories of visitors to the Capital City.

Old timers remember Sunday brunches at the Georgian-style original Cornhusker, the pigtail French fries in the Teepee room, and impressing a date with a Michelob draft and hamburger on Saturday night.

Former U.S. Sen. Carl Curtis remembered staying at the old Cornhusker during the depression for $2.50 a night. “That was for a room with a bath.” (From the Cornhusker Souvenir Edition, February 1984.)

David Landis ended his first date with Melodee McPherson, who would become his wife, with a giant sundae served in a brandy snifter at the Cornhusker Hotel in the mid 1960s.

The original Cornhusker was closed in November 1978. Four years later the grand old hotel was demolished in seven seconds by a series of controlled implosions, making way for Cornhusker Square, with a new 10-story, 304-room hotel, an adjoining seven-story office building and parking garage, three-story atrium and 11,500-square-foot convention center.

Since 1981, the City Council has approved TIF for 89 projects in Lincoln, more than half of them during the 8½ years Chris Beutler has been mayor.

Under TIF, money from bonds is used to help the redeveloper with costs of items that are considered public improvements. The bonds are repaid over 15 years using the increased taxes paid on the property after it was improved.

Under that first redevelopment agreement for Cornhusker Square, Murdock, a Los Angeles developer with other financial investments in Lincoln, was to spend $31.5 million on the hotel.

Another $10 million would come from donations and public funds. That included $3.1 million in TIF bonds (with an expected interest rate of 12 percent). TIF would be used to build the convention-civic center, atrium and part of the parking garage, according to 1981 news articles about the agreement.

Nebraska voters approved tax increment financing in 1978, and the Legislature initially allowed TIF to be used only to buy the land and prepare it for construction.

In 1981, the Lincoln Chamber of Commerce and Lincoln leaders lobbied the Legislature to expand the TIF law so Lincoln could use it to help build Cornhusker Square. In fact the bill was nicknamed the “Cornhusker bill.”

Lincoln’s state senators were divided over the TIF expansion.

Then a state senator, Beutler wrote an opinion piece for the Lincoln Journal opposing the bill and suggesting that if tax dollars are to be used to subsidize private developers, there should be a vote of the people on each project.

Three Lincoln senators, Beutler, David Landis and Jerome Warner, voted against the bill that year. Decades later, Beutler, who is now mayor, and Landis, who is the city’s Urban Development director, have taken advantage of TIF during their eight-plus years as city leaders, negotiating 48 TIF projects.

Those projects called for more than $79 million in TIF funding and $534 million in private investment, based on information provided by the Urban Development Department.

The most recent TIF agreement approved by the City Council is Victory Park, the redevelopment of the VA campus near 70th and O streets.

The largest TIF project was the $10.7 million used for Nebraska Innovation Campus.

With the Cornhusker, TIF made up about 7.5 percent of the total $41.5 million project. In the past decade, TIF has helped pay for 13 percent of the city's redevelopment projects.

The arguments on either side of TIF have remained the same since the Cornhusker project was pitched.

TIF is one of the few mechanisms local communities have in the battle to attract new companies and in encouraging redevelopment in declining areas, supporters say. But opponents see TIF as an unnecessary subsidy for businesses that comes at the expense of local taxpayers.

In a 1981 article, proponents said TIF was a way to spur development, job growth and new business. But opponents at the time said the financing method amounts to unfair competition to other developers, keeps money out of the general fund, and allows large-scale public construction projects without a vote of the people.

TIF can only be used in areas that have been declared “blighted” by a City Council, a designation that has also drawn controversy from the beginning.

In fact, some Lincolnites did not consider the four-block area containing the Cornhusker blighted. And then-state Sen. Beutler, in the late 1970s, said the new law was so broad “it is hard to imagine any block in downtown Lincoln that could not qualify for tax-increment financing.”

Much of downtown Lincoln has been blighted in order to use TIF over the past three decades. And the use of TIF has expanded over the years.

Lincoln’s second TIF project was the bus shelters on 11th street between O and N streets, next to what was then the Brandeis Building. That $695,000 in TIF funding also was used for relocation of storm sewers, new sidewalks and curbs, landscaping, ornamental lighting benches, drinking fountains, bike racks and signs near what would become Gold’s Galleria.

In 1983, the City Council refused to approve a redevelopment agreement that allowed TIF to be used to maintain the facade on a historic building, the Baldwin Terrace apartments, because most council members didn’t believe the facade was a public improvement. One member, Councilwoman Margrethe Ahlschwede did argue that this was one way to encourage historic preservation.

Today, TIF is routinely used to help pay for facade work, both in preserving older buildings and assuring that new prominent buildings, particularly in the downtown area, are attractive.

The new Cornhusker opened in 1984, beginning a new round of memories for visitors to one of Lincoln’s top hotels. Over the years, thousands of brides have had wedding pictures taken on the winding staircase of both hotels.

Suzanne Sughroue was among the first brides to be photographed on the steps of the new Cornhusker on March 23, 1985. She and husband, Scott, had their reception for about 200 people in the new Cornhusker and got their flowers from Hillis, which had a shop in the Cornhusker.

Her daughter Hannah and new husband, Ben Poe, also had their picture taken on those same stairs on their wedding day, April 18, 2015. The couple got their wedding flowers from Hillis, now in the historic Haymarket, and Hannah was wearing her Mom’s wedding dress, with just a little updating.

City leaders are concerned about the pedal pubs crawling around downtown and the Haymarket with liquor-drinking patrons on board.

The Cornhusker sells items from mundane to historically significant

Lisa McMeen started work at The Cornhusker in January 1984, just a month after the newly rebuilt hotel opened, replacing the old hotel that wa…

Memories of The Cornhusker Hotel

I worked at the Cornhusker Hotel in 1951. I operated the PBX; a real old-fashioned switchboard with lots of cords and lights. Guests would sch…

The new Cornhusker Hotel went up in 1982, its construction representing the first tax-increment financing project in Lincoln history.

The original Cornhusker Hotel was demolished in an implosion on Feb. 20, 1982, years after it closed to the public.