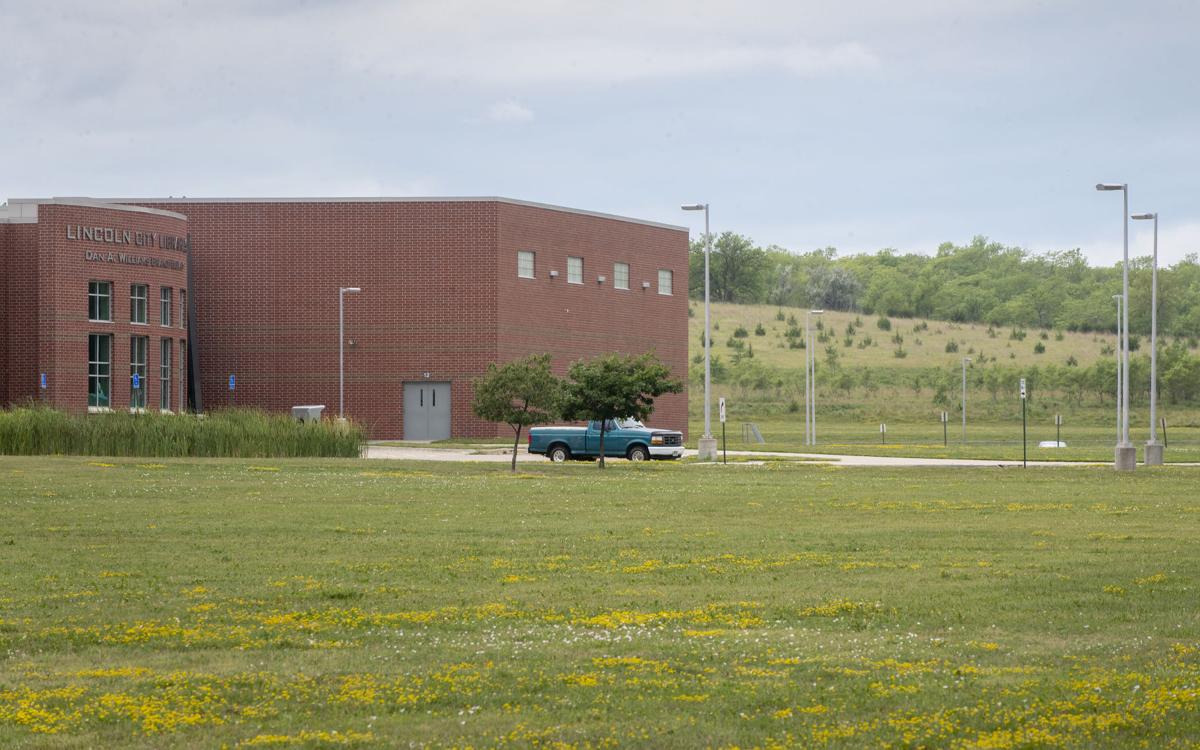 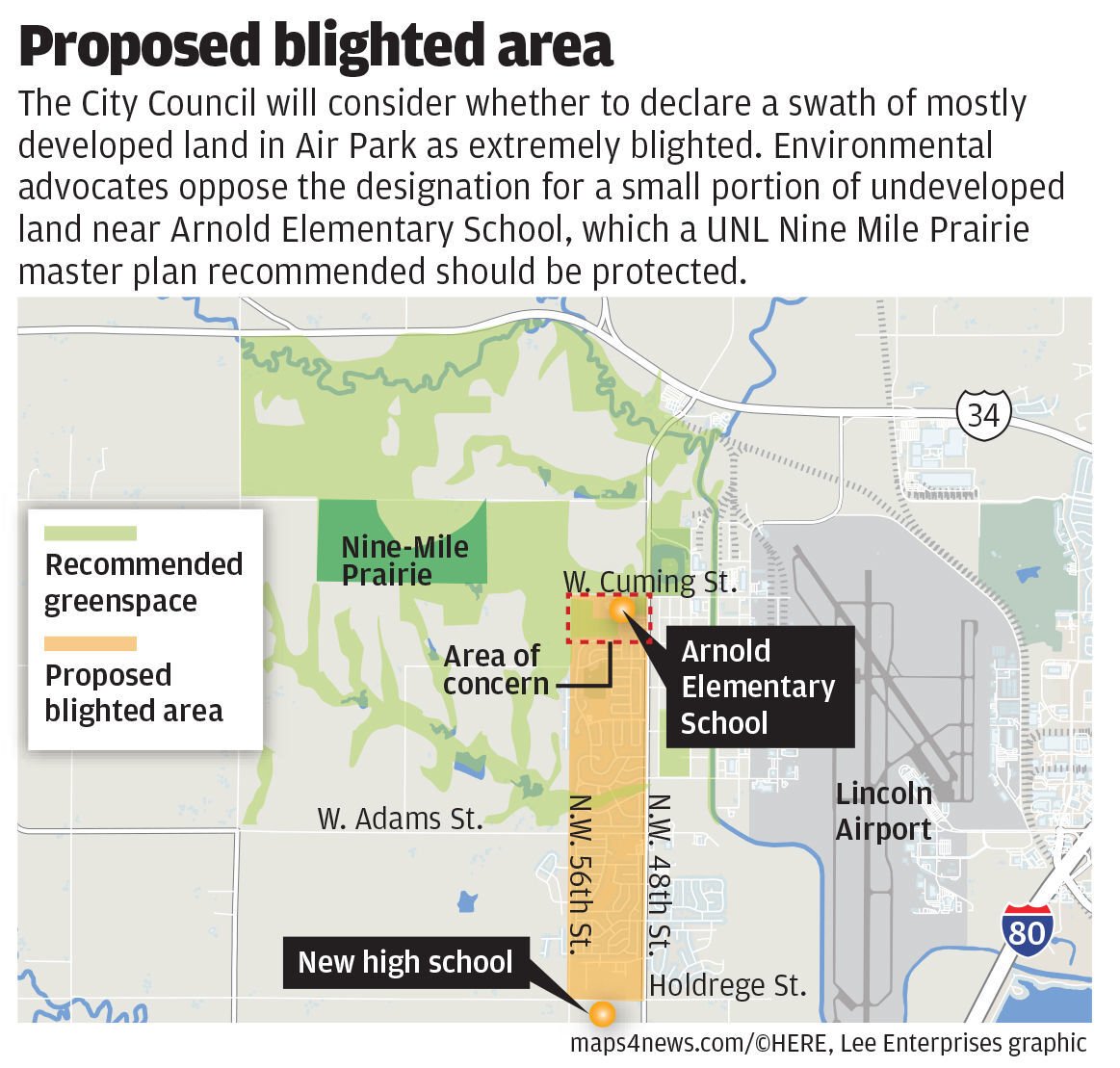 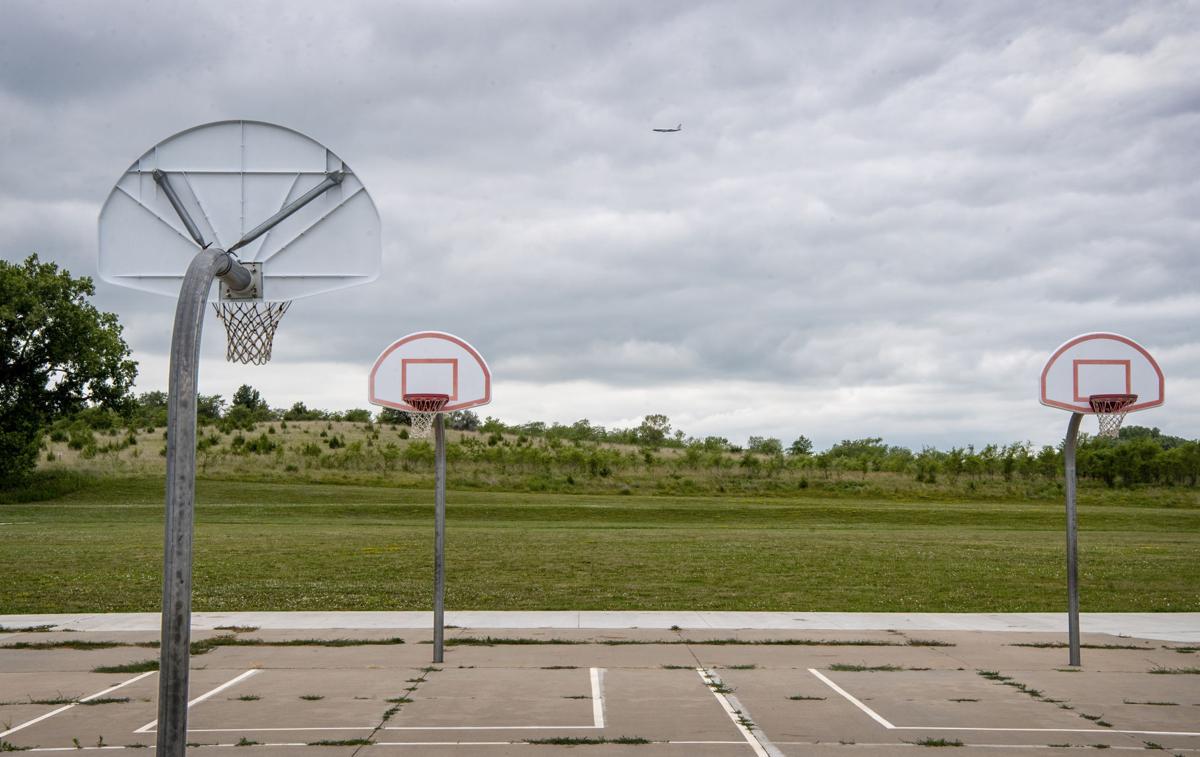 Nine-mile prairie environs at the edge of the basketball court at Arnold Elementary School.

A battle between development and native prairie, affordable housing and how to put the city’s new Climate Action Plan into practice is playing out on about 20 acres of land near Arnold Elementary in Air Park.

The land — about a half a mile away from the tallgrass of Nine-Mile Prairie — is a small part of a larger swath of land city officials want to designate as extremely blighted, an effort designed primarily to give qualifying low-income homeowners the opportunity to apply for tax credits made possible by a 2019 change in state law.

Most of the land at issue is housing west of Northwest 48th Street from West Holdrege to near the elementary school — and nobody’s got a problem with the designation for that land.

It’s the small area of undeveloped land — 17 acres just west of the elementary school and another 3.5 acres just to the north that concern environmental advocates.

They see attaching a blight designation to that land as giving a green light to developers because it allows them to seek tax-increment financing — and in fact a local developer has said he’s interested in building affordable housing on the land.

Instead, the environmental advocates argue, the land should be protected from development because of its rich and diverse habitat as part of the Nine-Mile Prairie ecosystem — a recommendation made in a 191-page master plan for the area completed in 2020 by the University of Nebraska-Lincoln Center for Grassland Studies.

“My primary concern is that we have just adopted a Climate Action Plan for the city of Lincoln with support of the City Council that includes a number of references to protecting tall-grass prairie,” McNabb said. “We’ve got a study that shows that to do that we need a buffer around Nine-Mile Prairie ... Taking steps that would lead to a housing development would undermine that goal.”

The Climate Action Plan addresses the importance of supporting prairie restoration and creating carbon sequestration plans, something that native grasslands are very effective at because of their extensive root systems that can store more carbon in the soil, she said.

McNabb and others concerned about preserving the prairie and the areas around it say the blighting designation is doing an end run around the ongoing update to the city’s comprehensive plan, which they hope will incorporate the 191-page Nine-Mile Prairie master plan.

The Wachiska Audubon Society wrote a letter to the council recommending the blighting designation exempt the 20 acres in question until the city works through the comprehensive plan update, including how to handle preservation issues.

"The best thing for city government to do right now is to re-read what it just enacted in the Lincoln Climate Action Plan and act as if it matters, because it does,” Jon Oberg wrote in a blog about the issue. Oberg owns prairie land in the area and has been involved in environmental issues for years.

“Bird and pollinator populations are collapsing, climate change is evident everywhere, and the time for climate action is now,” he wrote.

Members of Wachiska Audubon Society, which was active in helping create Nine-Mile Prairie when the University of Nebraska Foundation bought the 230 acres in 1983, and other advocates say there was little notice by the city about its intention to seek a blight designation.

Dan Marvin, the city’s urban development director, said he wasn’t aware that advocates of Nine-Mile Prairie were going to have concerns and the city doesn’t want to threaten Nine-Mile Prairie.

To be truly effective, the Climate Action Plan has to be adopted and incorporated by all city departments, said Gene Hanlon, who coordinates a group of 18 environmental and community groups that meet monthly.

The group has concerns about the blight proposal in the context of the Climate Action Plan recommendations, he said.

“This TIF blight recommendation is the first time an issue has come before the City Council that conflicts with the Climate Action Plan,” he said.

But Marvin said having a blight designation on an area that will likely be developed can actually help by adding extra scrutiny to projects.

Developers interested in building on the land would have to get a redevelopment plan approved by both the Lincoln-Lancaster County Planning Commission and the City Council. That plan, which is only required by developers seeking tax-increment financing, would allow the city to require specific protections for the land and provide financing for them.

Miki Espisito, a mayoral aide spearheading the climate plan’s implementation, said environmental advocates are correct about the goals of the plan. The debate, she said, isn’t about whether protecting the land is important, it’s about how best to do it.

The blight designation, she said, gives the city more tools to regulate the area. A redevelopment plan could, for instance, require wider setbacks, the use of native plants and grasses and low- or no-mow areas.

Complicating the issue is ownership of the land and a 14-year-old agreement between the city, Lincoln Public Schools and the Lincoln Airport Authority created to sell land to the school district when it built the new Arnold Elementary.

The city holds title to the land but in 1959 transferred possession and control to the Lincoln Airport Authority. In the 2007 agreement to sell land to LPS, the city agreed to zone the 20 acres at issue now as residential and accommodate the surplus and sale of the land when the Airport Authority wanted to do so.

Bill Austin, the attorney who represents the Airport Authority, said Federal Aviation Administration rules require that it get fair market value for the land.

“The Airport Authority understands some of the concerns of Nine-Mile Prairie but doesn’t understand why they are having a buffer going as far as they’re trying to get it to go,” he said. “Unfortunately it’s a situation where the Airport Authority has an obligation to maximize the value of its property.”

While the land in question isn’t directly adjacent to Nine-Mile Prairie, it is in the “environs” that encompass the master plan created by UNL. Advocates say the flora and fauna are part of that ecosystem, and the study recommended the land in question be preserved as green space because of the diversity of the habitat and the connection to Nine-Mile Prairie by stream and tributary corridors.

In his blog, Oberg said the city has changed zoning in the past to preserve grassland prairies, including in 2018 when then-mayor Chris Beutler and the council decided not to sell the parcels in question, instead asking for a recommendation from the UNL Center for Grasslands Studies.

But Marvin said given the 2007 agreement with LPS and the Airport Authority, a blight designation wouldn’t stop development, just the ability of developers to use TIF.

“To me then the question is, is there a way to achieve some of those goals and protect some of the stream corridors and other areas you’d like to preserve,” he said.

Fred Hoppe, a developer who builds affordable housing, told the City Council on June 28 that one of the challenges of affordable housing projects is finding appropriate sites. Tax-increment financing, he said, is typically used to help finance them.

TIF allows developers to use the increased future property taxes the developed property generates to pay for certain upfront costs. In addition to creating the tax credit for homeowners, the law in 2019 that created the “extreme blight” designation also allows developers building affordable housing projects to get preference for certain grants and loans.

When Hoppe found out about the blight study, he determined that the 3.5-acre tract would be a good site for a 40-unit affordable housing unit and the 17 acres for 100 units as well as single-family homes. He has not yet submitted a redevelopment plan.

Developing 100 houses would open the area to domestic cats that kill birds, household pesticides and streetlights that would disrupt the nocturnal environments, Oberg wrote in his blog.

Dave Wedin, a University of Nebraska-Lincoln professor and Nine-Mile Prairie director, said he doesn’t have a position on the blight designation issue. It’s not directly next to the prairie, so other stakeholders are more directly impacted.

He works closely with the neighbors directly adjacent to the prairie including the Airport Authority and he understands the constraints they are under. He also understands the concerns about protecting green space and welcomes as much habitat for pollinators in the area as possible.

“My position is the Nine-Mile Prairie master plan is an excellent resource that should help planners,” he said.

It doesn’t need to adhere to a rigid dichotomy of development or no development, he said. Instead, planners should find a creative solution.

The City Council heard testimony on the blight and extreme blight designation on June 28, but decided to postpone a vote for a week.

Councilwoman Tammy Ward offered an amendment to reduce the proposed blighting area, which was originally 1,750 acres that stretched from West Holdrege Street to Fletcher Avenue. Her proposed amendment would reduce the area by moving the northern line to West Cuming Street, just north of the school.

That area still includes most of the 20 disputed acres.

Ward said she plans on Monday to ask for the council to postpone the vote for at least another two weeks in an effort to work out an agreement.

“There’s going to have to be some give and take on both sides,” she said.

Sampson Construction is renovating Sky Park Apartments , 1301 Lincoln Mall, with tax-increment financing, a portion of which will be used to rehab other affordable housing in the area.

Fire and police will use $19 million in pandemic relief for updating stations and modernizing equipment.

Downtown Lincoln's Sharp Building is on the road to renewal

The City Council on Monday approved the redevelopment plan for the Sharp Building, which has anchored 13th and M streets for nearly a century. The project will use $1.37 million in tax-increment financing.

The City Council Monday delayed a vote on land near Arnold Elementary that environmental advocates say should be protected, but others want to open for development of affordable housing.

Nine-mile prairie environs at the edge of the basketball court at Arnold Elementary School.