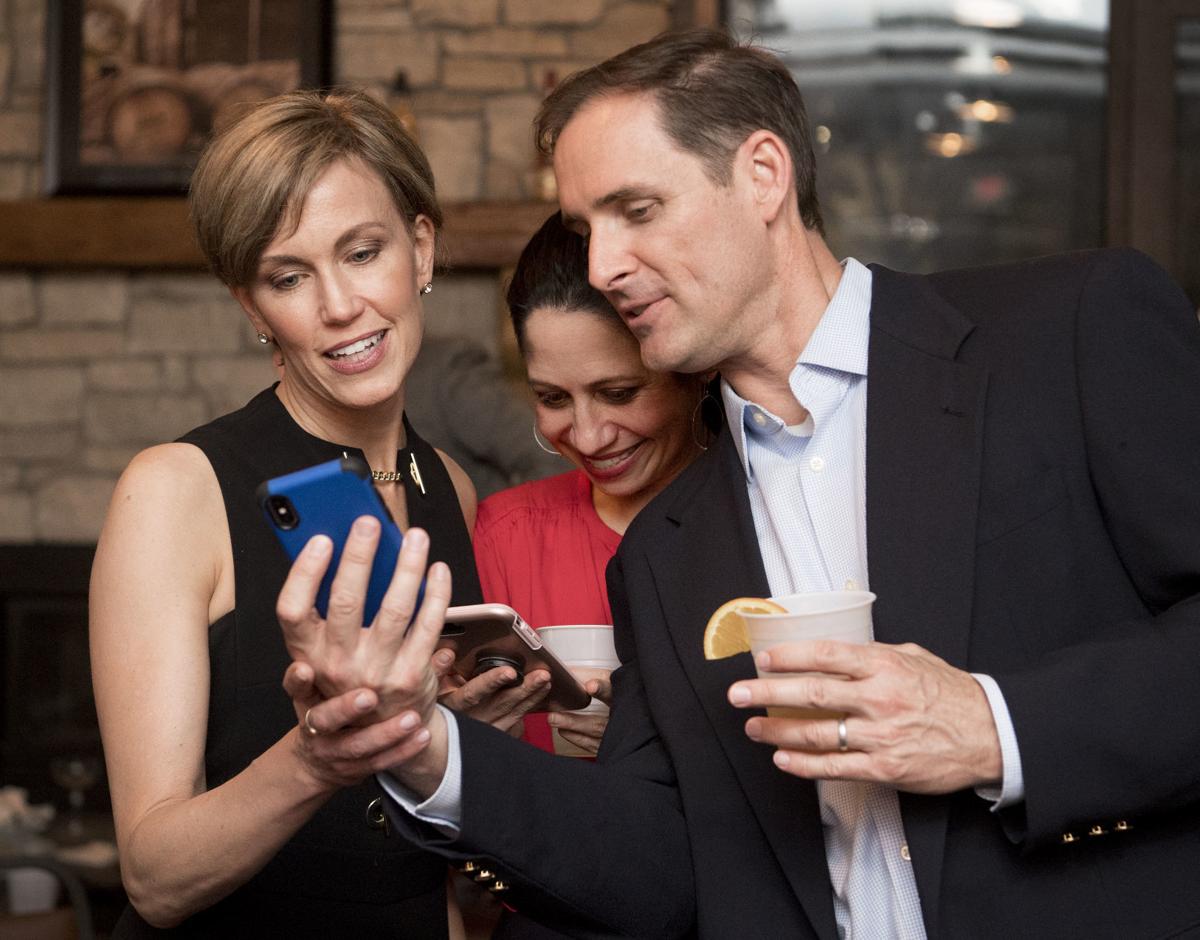 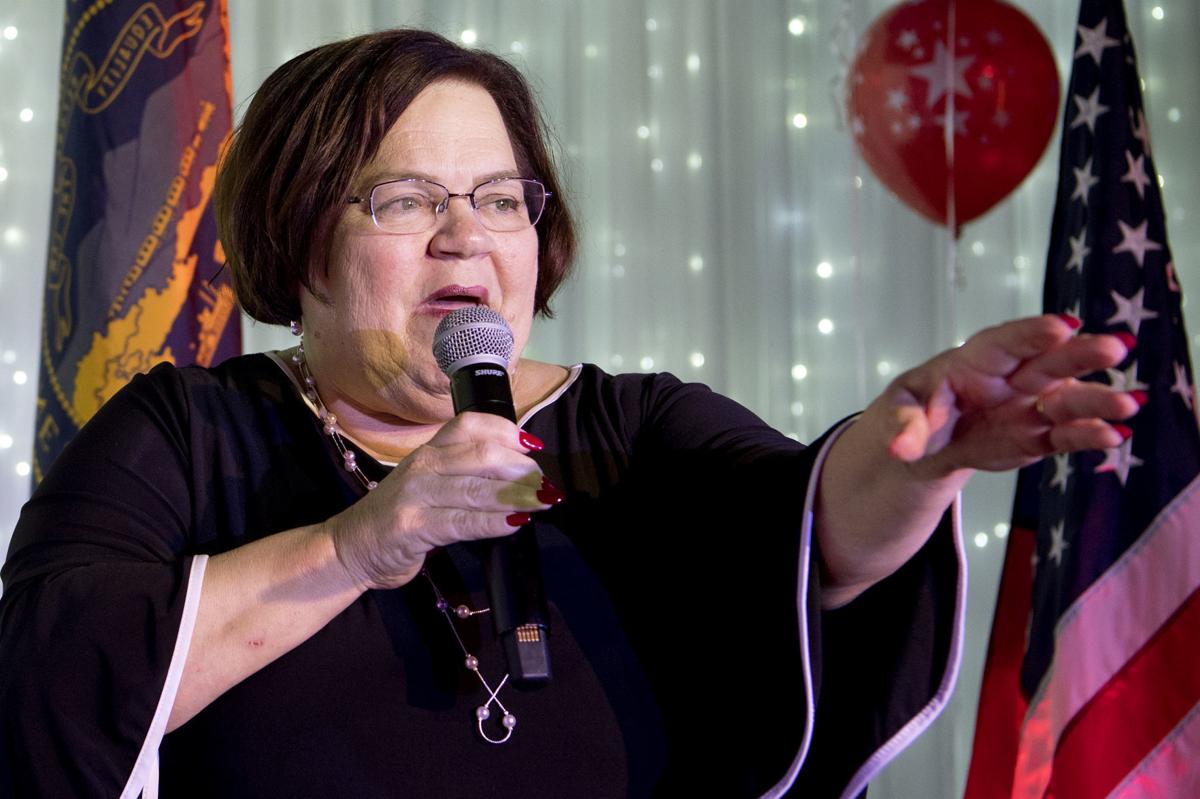 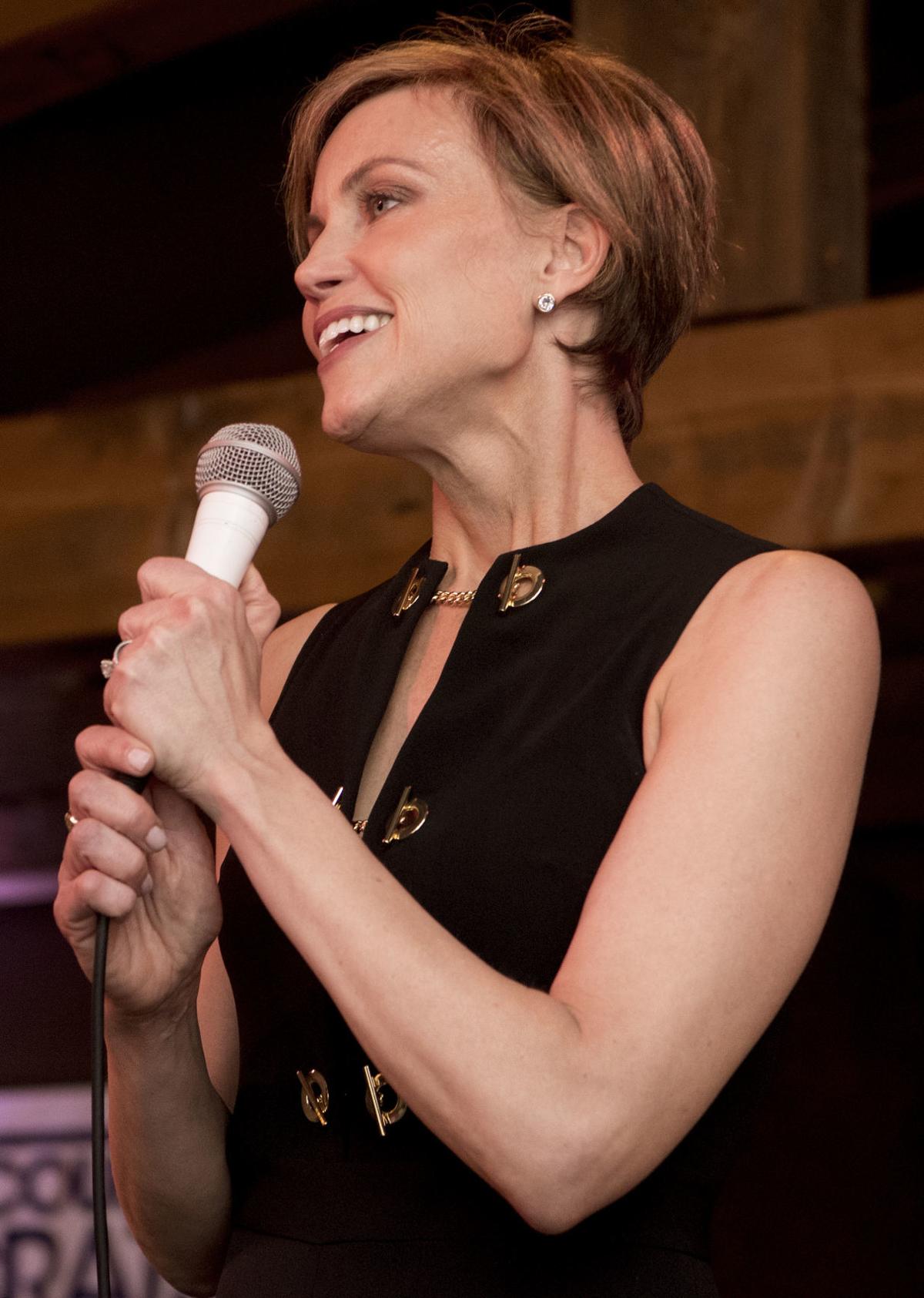 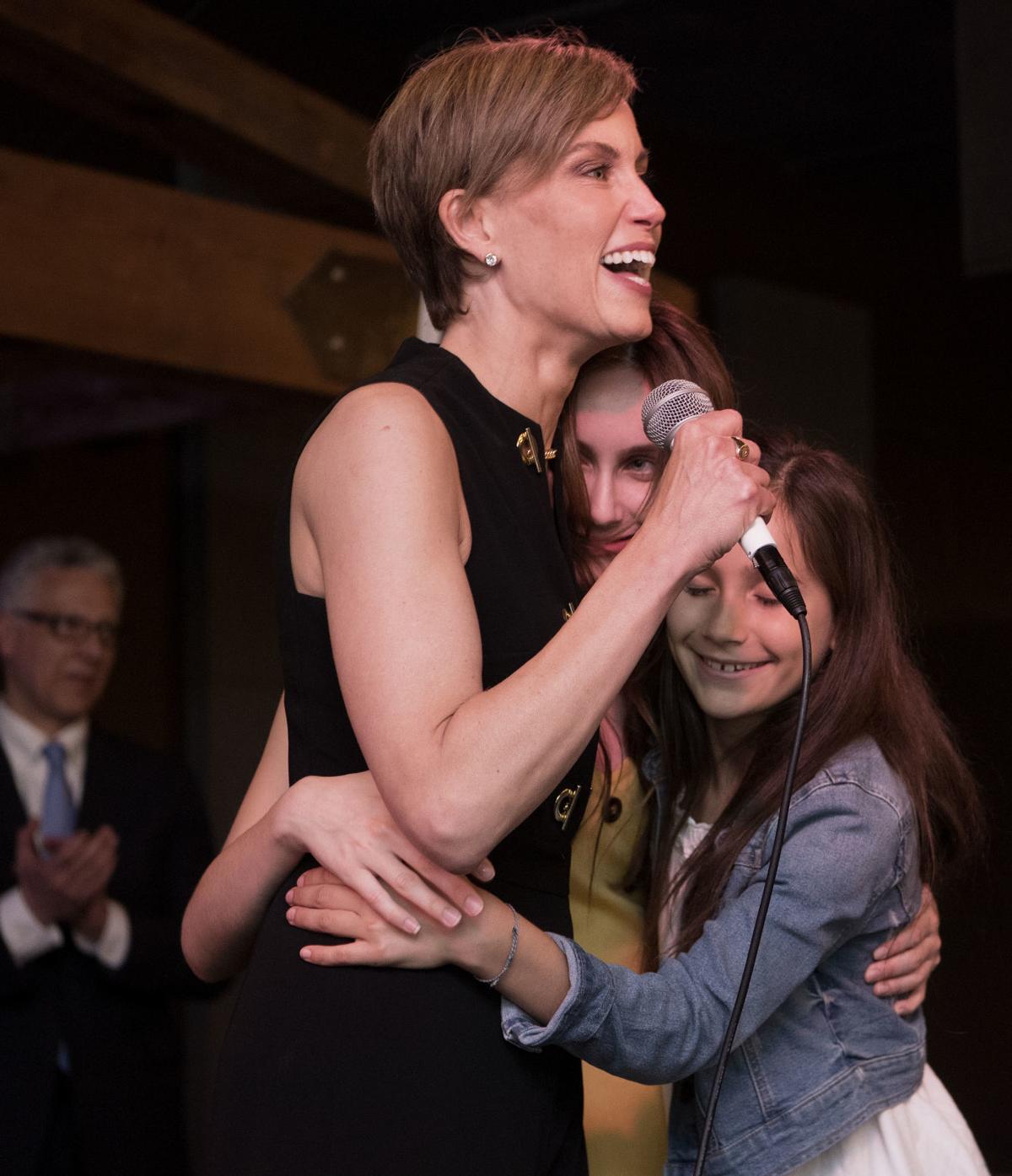 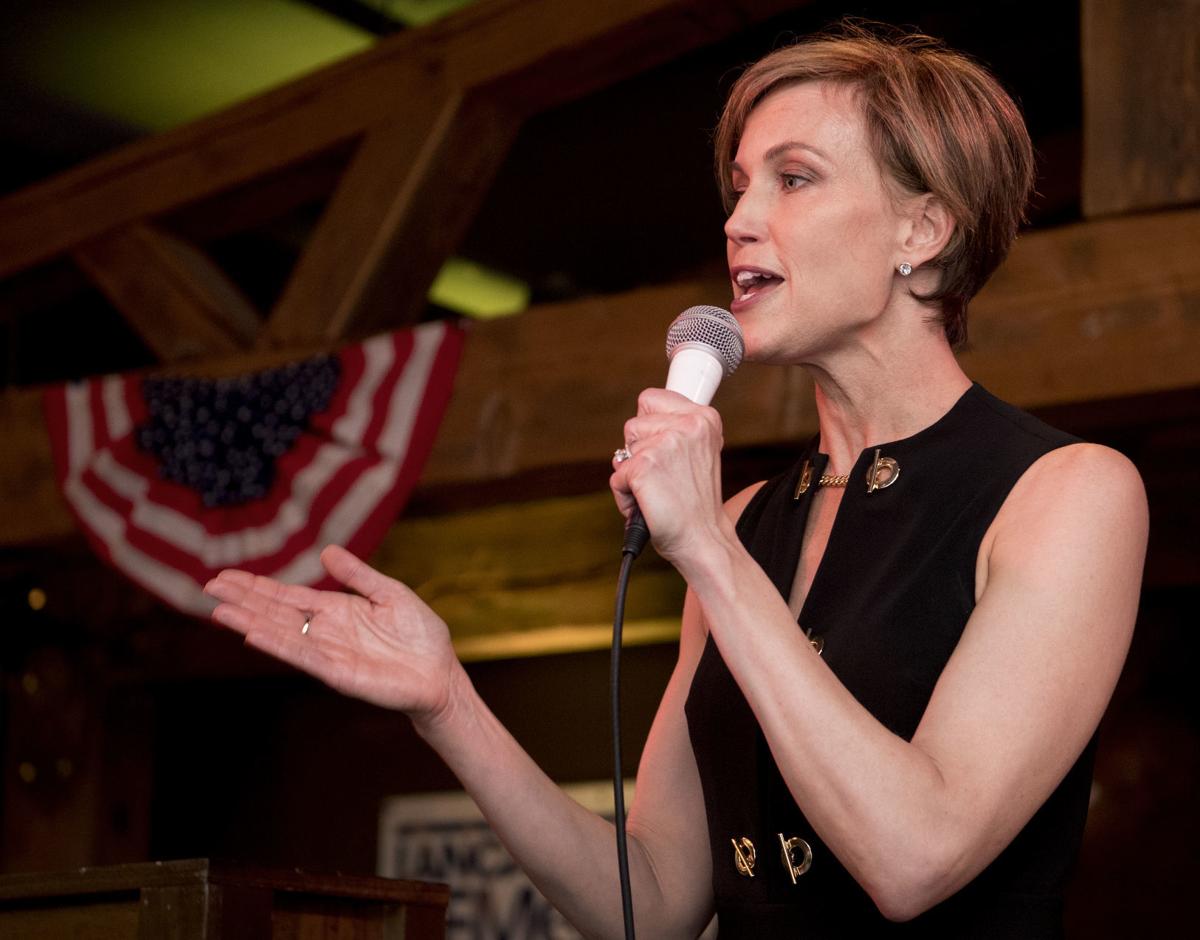 Leirion Gaylor Baird speaks to supporters during an election night party on May 7. 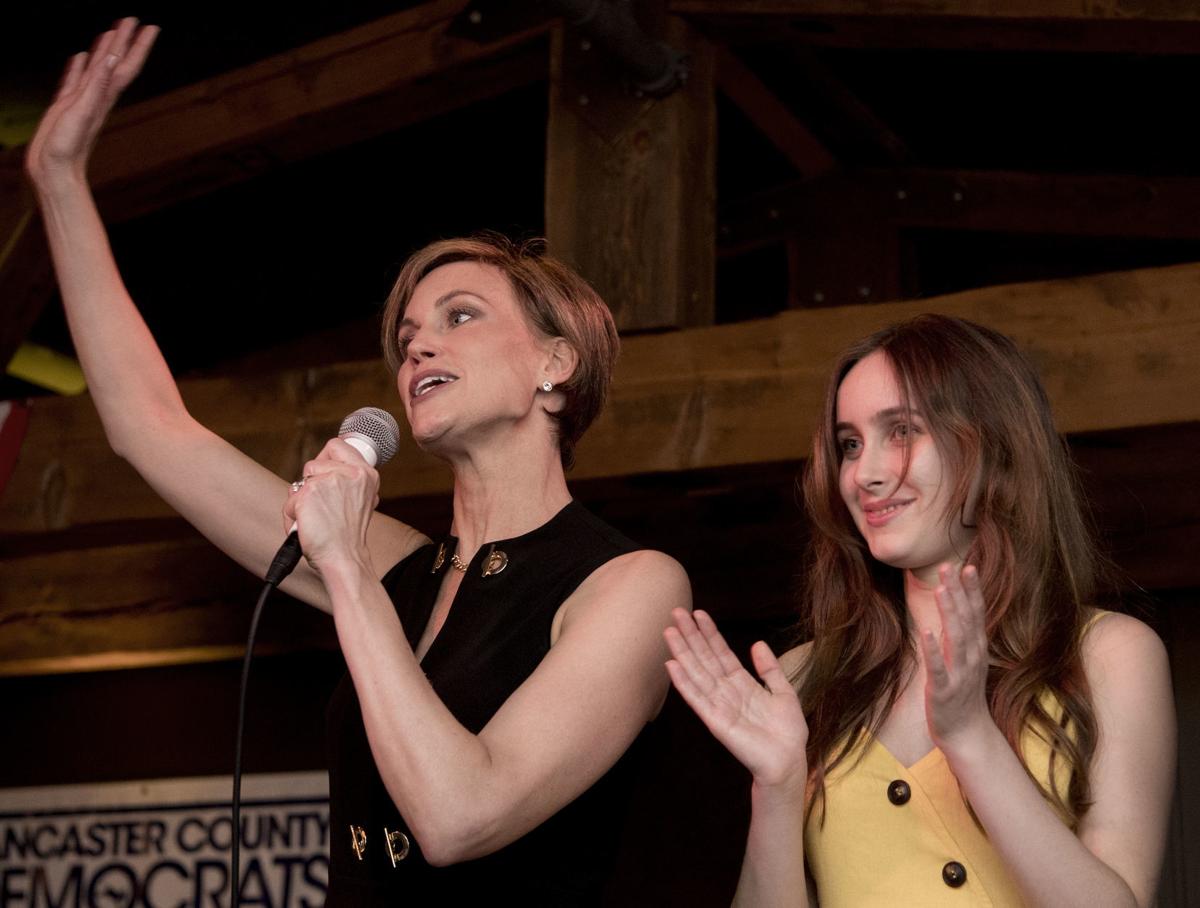 Lincoln mayoral candidate Leirion Gaylor Baird (left) addresses supporters with daughter Avalena by her side during an election night party on Tuesday. 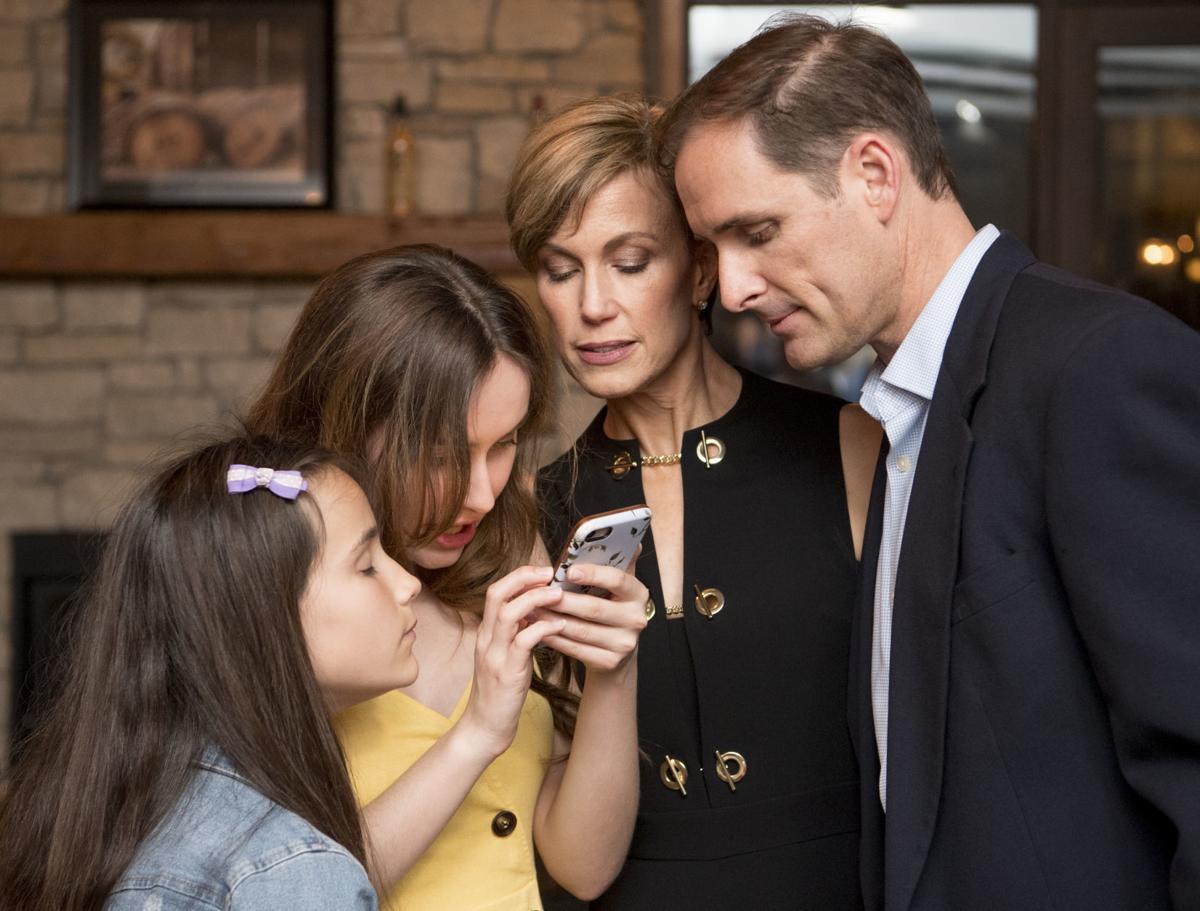 Lincoln mayoral candidate Leirion Gaylor Baird (second right) and her husband Scott (right) look as the clinching voting totals come in with their daughters Clio (left) and Avalena during an election night party on Tuesday.

When Leirion Gaylor Baird talked to Lincoln Mayor Chris Beutler about her designs to run for a City Council seat in 2011, she couldn't help but laugh at his response.

"Who knows? Maybe one day you'll be mayor," she recalls him telling her.

Tuesday night the idea Beutler planted with Gaylor Baird bloomed, and the 47-year-old city councilwoman succeeded him nearly 17 years after moving to Lincoln with her family.

Her victory continues a 20-year winning streak of Democratic mayoral candidates, and she credited her win to a coalition of residents seeking to propel the city forward following the economic growth Beutler ushered in.

"Lincoln has spoken and with a resounding voice they have said, 'We want to keep this city moving forward on the amazing path we have been on,'" Gaylor Baird said.

A group of Republicans had put the term limits charter amendment to voters in hopes of giving the party’s candidates a better shot in mayoral elections.

Beutler endorsed her later that month over his City Attorney Jeff Kirkpatrick, a fellow Democrat.

As her opponents pitched new proposals on ways the city could address infrastructure challenges and snow removal, among other issues, Gaylor Baird campaigned more quietly.

But at the April 9 primary, she captured more than 21,000 votes in a five-candidate race, edging Lamm by 6 percentage points.

A child of public school teachers raised in Oregon, Gaylor Baird studied at Yale, worked at a Fortune 500 management company, earned a master's degree from Oxford University and then worked as a budget analyst for the city of San Francisco.

Her family moved in 2002 to Lincoln, where her husband, Scott Baird, part owner of a software company, had an attractive job opportunity.

She began caring for her infant daughter, but soon began volunteering and in 2007 was tapped by Beutler to serve on the a City-County Planning Commission.

Six years later, she ran a successful bid for one of the three at-large City Council seats. She won re-election in 2017.

In all three of her elections, Gaylor Baird proved herself a formidable fundraiser and led the other candidates in donations.

Since she launched her mayoral campaign, Gaylor Baird has collected nearly $390,000, more than three times the donations raised by Lamm, which totaled $116,000. The Democrat's spending for the mayoral bid will close in on $500,000.

After voters sent her and Lamm to the general election, the contrasts between the two candidates were stark.

Lamm set herself as the candidate of change, pushing a platform of cutting the size and scope of local government and finding ways to reduce taxes by prioritizing public safety infrastructure and other essential government services.

But Gaylor Baird stressed the need to build on the city's momentum that gathered over Beutler's terms.

She said the city needs to balance the funding needs of basic city services while also maintaining the parks, trails and library programs that keep the city an attractive place for young professionals and families.

At a election night party in east Lincoln, Lamm called the campaign "quite the lesson in democracy."

"I am so glad that we live in a system that allows us to participate and choose who represents us," Lamm said.

And even as she prepares to leave the City Council, Lamm said she will continue her push for transparency in government.

“This isn’t the end of the line,” Lamm said. “What I can promise you is that I will continue to be a watchdog for this city.”

Gaylor Baird has pointed to her work on City Council last year enacting an initiative to improve school safety and add student resources over funding concerns as a sign she'll seek to build consensus so policies aiming to improve the city last.

Gaylor Baird said she intends to serve out her term on the council. She'll be sworn in May 20 along with the new council, which will have a Democratic majority and will designate her successor to an at-large seat representing the entire city.

While she shifts gears from campaigning to her governing priorities, she implored supporters Tuesday to build bridges to those with whom they may not agree.

"We all have a stake in the future of this city regardless of where we stand on the political spectrum," Gaylor Baird said. "And if we're working together to make this an even better place to call home for all our families then that is a true victory."

Lincoln Board of Education District 4

Council to future Lincoln mayors: Tell us before spending money to educate voters

First the renters stood up in the Lincoln City Council chambers.

When Jon Camp was first elected to the Lincoln City Council in 1999, one of his goals was to get the South Beltway done as quickly as possible.

Leirion Gaylor Baird speaks to supporters during an election night party on May 7.

Lincoln mayoral candidate Leirion Gaylor Baird (left) addresses supporters with daughter Avalena by her side during an election night party on Tuesday.

Lincoln mayoral candidate Leirion Gaylor Baird (second right) and her husband Scott (right) look as the clinching voting totals come in with their daughters Clio (left) and Avalena during an election night party on Tuesday.