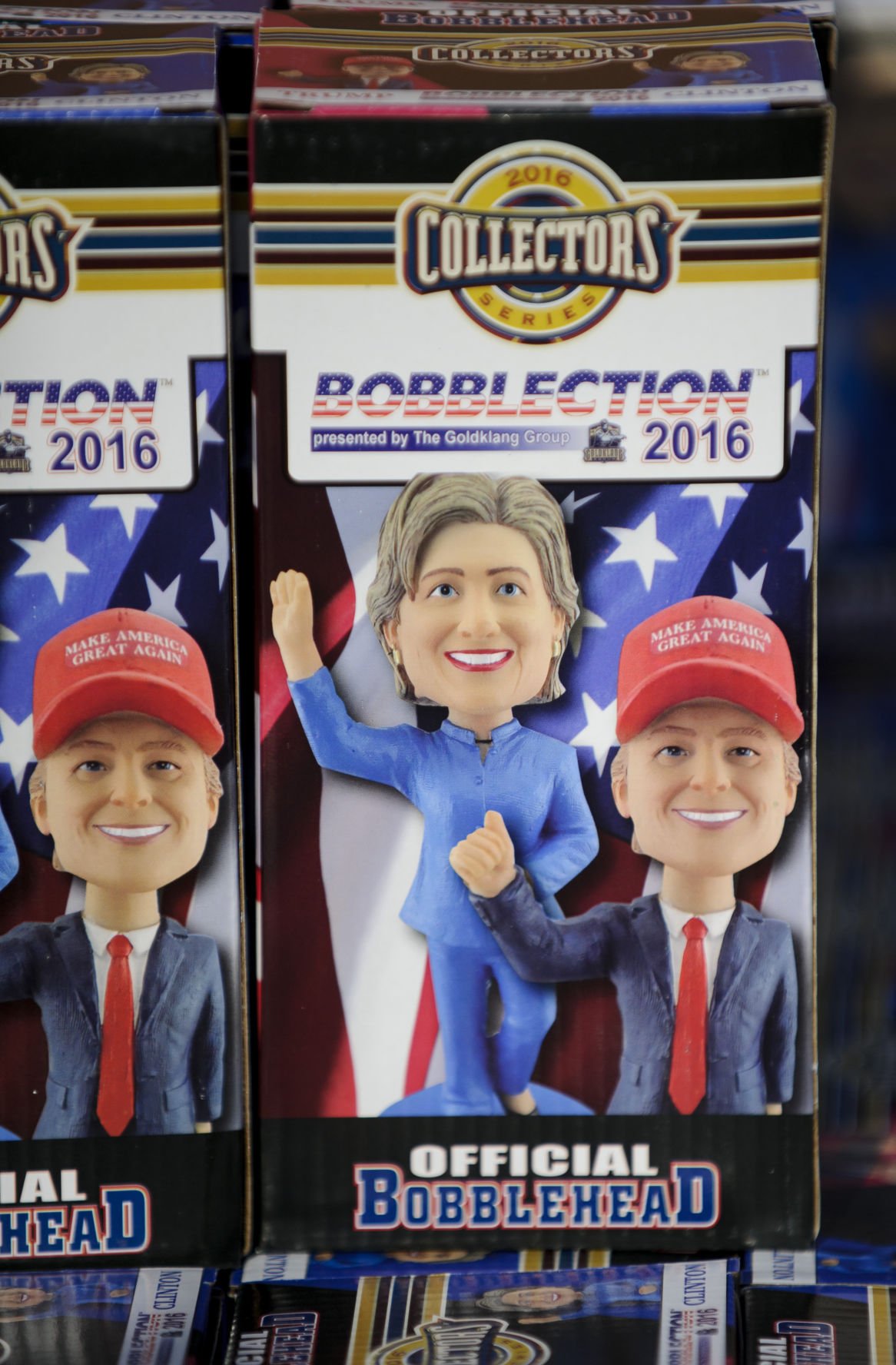 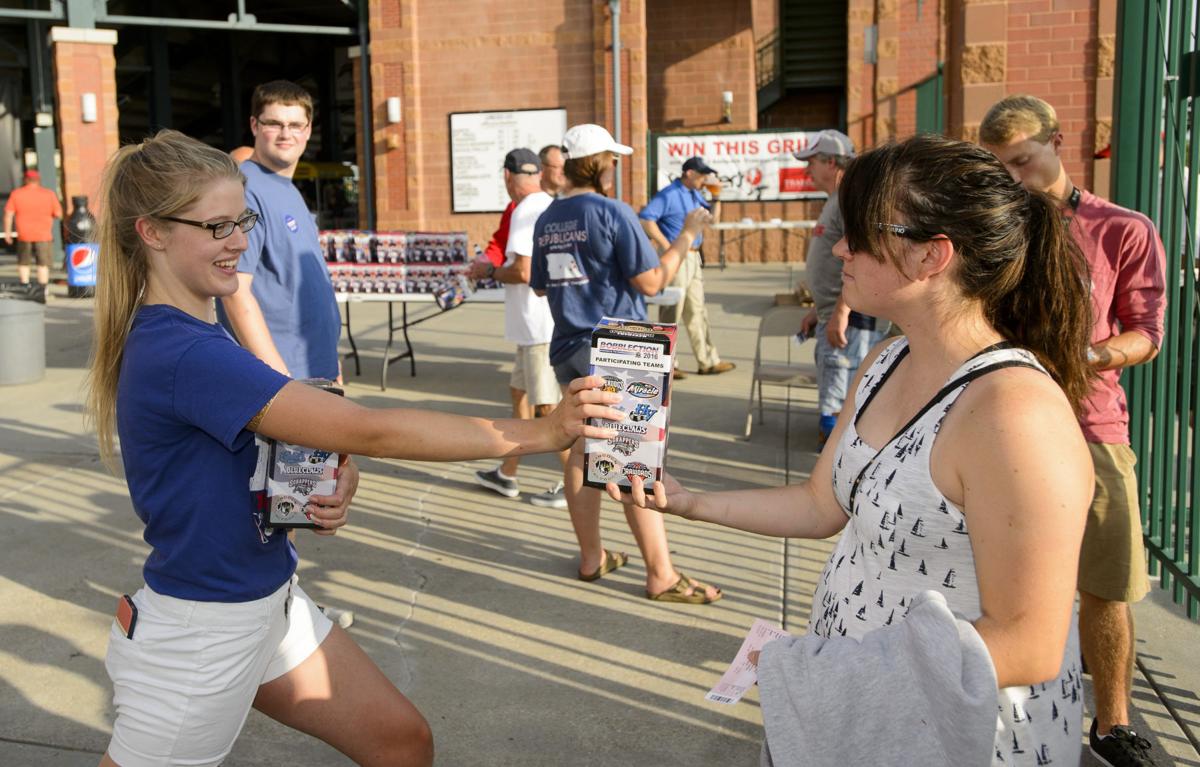 Donald Trump supporter Marilyn Synek of Kearney (left) hands a Trump bobblehead to Katie Wilson of Lincoln during the 2016 Bobble Election before the Saltdogs game on Tuesday at Haymarket Park. 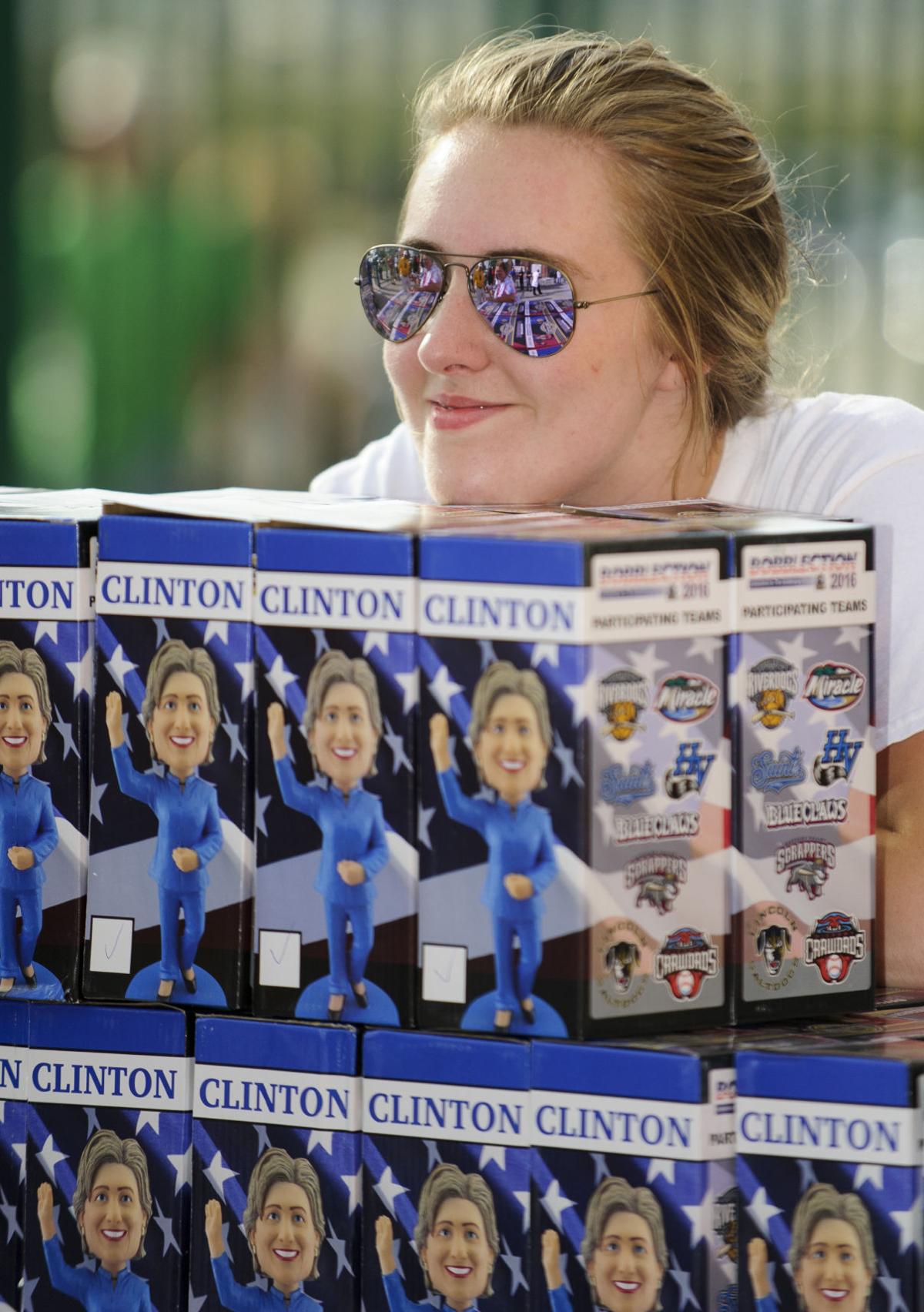 It was the battle of the bobbleheads.

Saltdogs’ fans cast their votes by choosing a free bobblehead before settling down for a game. Whichever of the 500 bobbleheads ran out first was the winner.

Charlie Meyer, president and general manager of the Lincoln Saltdogs, said the poll wasn’t about politically dividing baseball fans but having fun and satisfying curiosity: Will Trump or Clinton be the last man or woman standing?

“It’s been a heated race, and I think it will get much more heated once we get closer to November,” Meyer said. “But this is a fun deal."

Besides entertainment, Meyer said they hoped to raise awareness by reminding people who haven’t registered to vote to go do so.

Few fans hesitated once confronted with choosing between bobbleheads.

Soft cheers of “Make America Great Again” could be heard every now and then, as could a wife scolding her husband as he picked up a Trump.

One woman scoffed and said “Only if we’re sticking pins in it.”

The choice among Trump or Clinton bobbleheads didn’t always indicate support for that candidate. Many jokes were uttered about using Clinton as a voodoo doll or grabbing a Trump to sell for big bucks in the future.

Zach O’Brien, first in line, wasn’t messing around. He’s what he calls a “die-hard” Trump fan and has been since day one. At least five people behind O’Brien were on his side, too.

Greg Sharp has been with Trump since the beginning. His 11-year-old daughter, Jillian, can’t vote yet, but she’s behind Trump, too. But for the sake of having a set between them, she grabbed a Clinton.

“Hillary is dangerous,” Sharp said. “I’m ex-military and the whole email thing, it kills lives, seriously. It’s just a lot of stuff with her past and history. I don’t like what Obama has done, and I think electing Hillary would just be four more years of the same thing.”

Many young girls picked up a Clinton because of “girl power.” Alana Casas, 9, really wanted to tell it how she thinks it.

“I think Hillary’s going to be a great president,” she said. “I don’t think Donald Trump should be president because he’s racist. He’ll probably start World War III. ”

And her mother, Benita, doesn’t want Trump to have any influence on her children.

“The negativity that comes out of him, I don’t want my kids to grow up thinking that it's OK to say those things about people -- and then be president,” Casas said.

But with people choosing because of humor and others saying they “just don’t like either,” it’s hard to say whether Tuesday’s results represented the baseball community’s choice.

The boxes looked the same, with the only defining feature between them a small, black check next to the name of the candidate inside.

Nebraska Democrats decided not to participate in the bobblehead election, but Nebraska Republicans did. Even College Republicans from University of Nebraska at Kearney made the trip to Lincoln to campaign -- and with a lot of effort -- standing at the front of both lines with Trump boxes in hand asking, "Would you like a Trump bobblehead?"

"I'm a little disappointed Nebraska Democrats didn't come out to this event," said Marilyn Synek, a junior and leader of College Republicans at UNK. "Maybe it could make it more competitive if they were trying to hand out bobbleheads, but I think a lot of Nebraskans support Trump."

Regardless of results, Saltdogs staff reminded fans the night is about the love of a good baseball game.

The main action: Lincoln Saltdogs and the Gary SouthShore RailCats.

"It's a good night to come out for some baseball," Meyer said. "We're just having some fun with it."

Groups that want to legalize casinos at Nebraska horse racing tracks are trying to decide what to do now that a $1.4 million petition drive ha…

The death penalty debate has moved out of the Legislature and into the public square.

Donald Trump supporter Marilyn Synek of Kearney (left) hands a Trump bobblehead to Katie Wilson of Lincoln during the 2016 Bobble Election before the Saltdogs game on Tuesday at Haymarket Park.