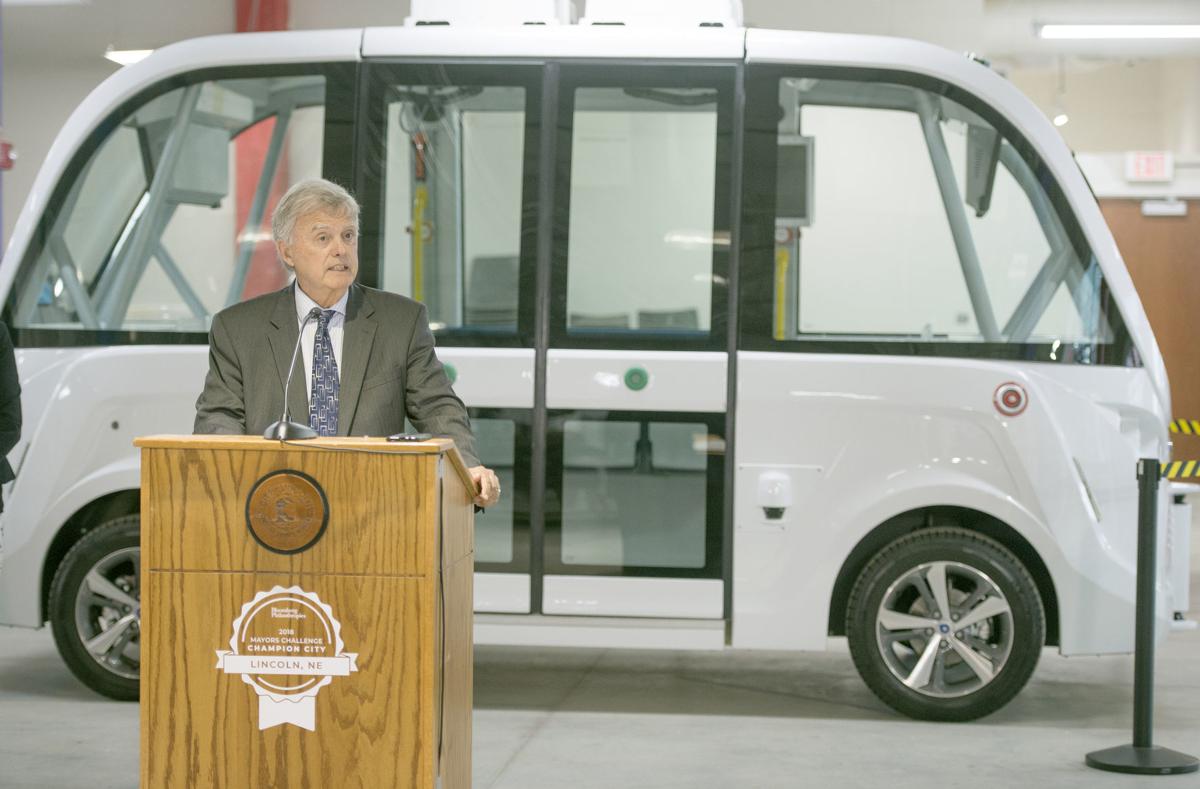 Mayor Chris Beutler spoke during a news conference in June at Nebraska Innovation Studio announcing the arrival of a driverless shuttle. 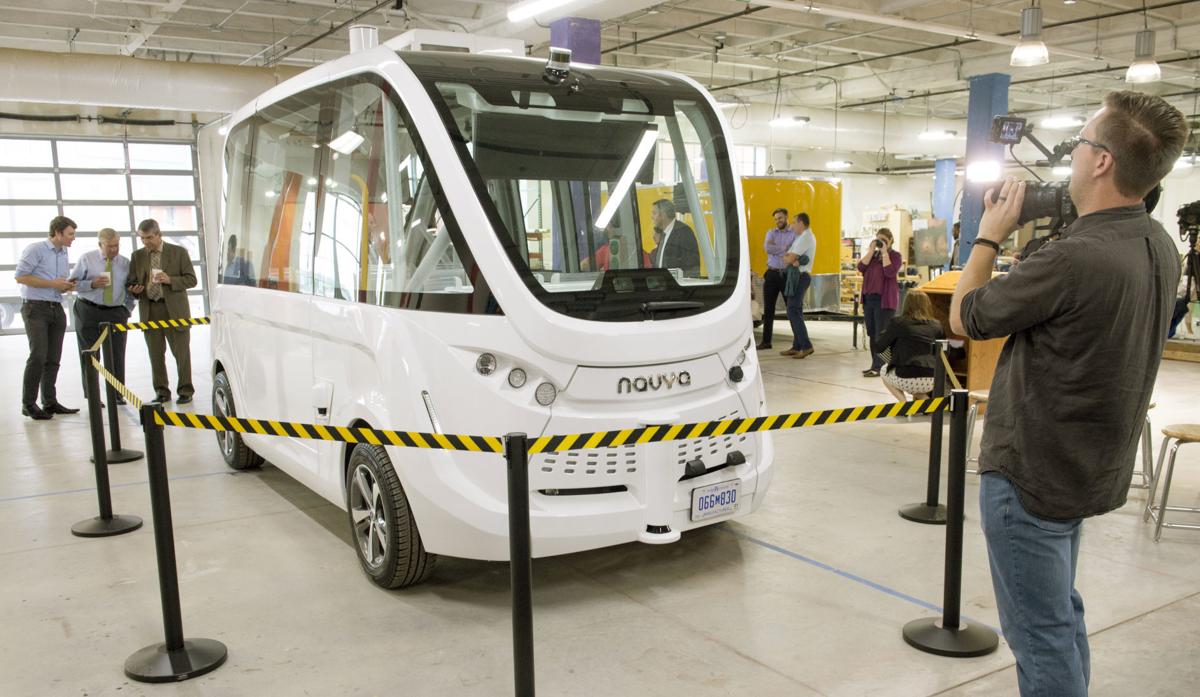 The automated electric Navya (NAHV-yah) shuttle has arrived in Lincoln and was the star of the show at a news conference Wednesday at Nebraska Innovation Studio. 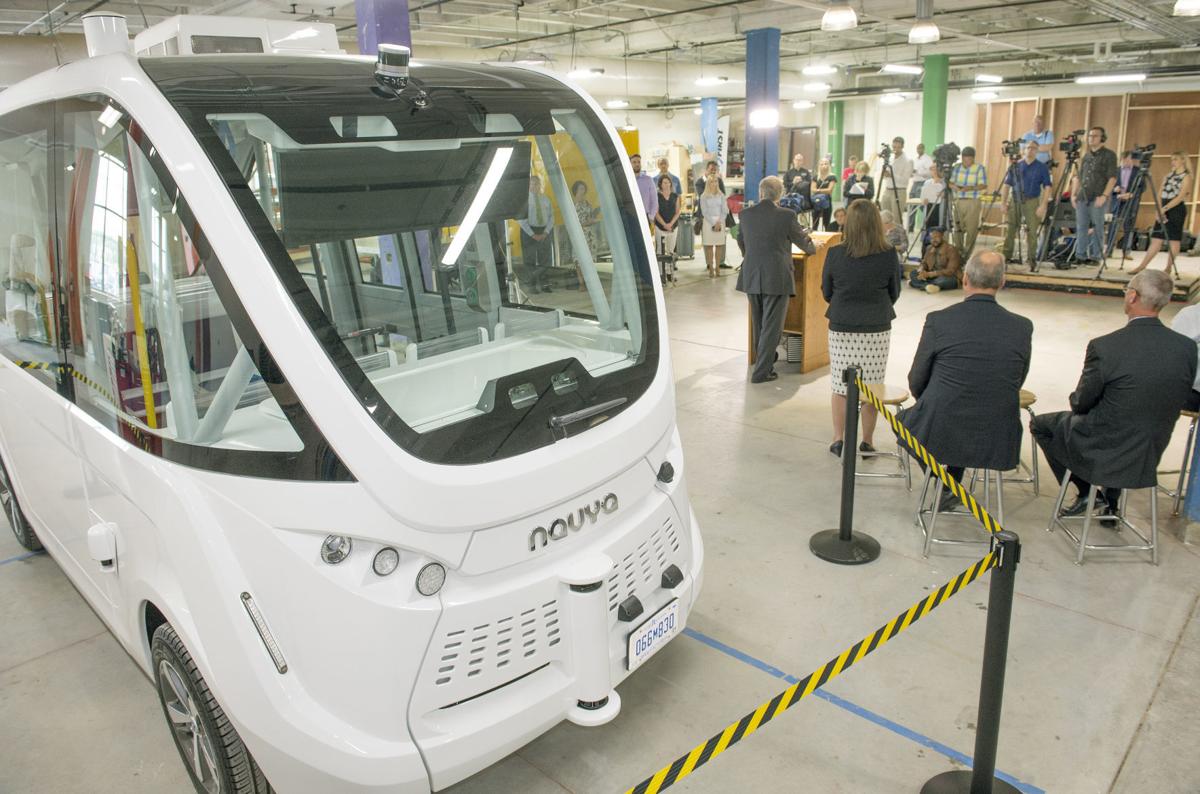 The automated, electric Navya shuttle arrived in Lincoln on Tuesday and was the star of the show at a news conference Wednesday morning at Nebraska Innovation Studio. The city will test the driverless shuttle at Innovation Campus, with the goal of having a shuttle system downtown.

From horses to trains to cars and airplanes to automated driverless vehicles, Lincoln residents continue to be pioneers, always looking for better ways to travel, Lincoln Mayor Chris Beutler said as he stood in front of a 15-passenger driverless shuttle that will be tested in the city this summer.

The white Navya van, which arrived in Lincoln on Tuesday, was on display at Nebraska Innovation Campus during a news conference Wednesday providing more information on the city's plan to study the use of an autonomous shuttle system to help with traffic and parking issues downtown.

“Autonomous vehicle technology will change the course of history, generating the same transformational impact on our society as the transcontinental railroad or the national interstate system,” Beutler said.

“With this project we get to be a part of shaping that history.”

The city will test the shuttle on Innovation Campus and downtown streets and will eventually invite the public to ride in the van and provide comments about the shuttle and a potential shuttle system.

The public feedback is an important part of the process, Beutler said.

Information about public shuttle access will be announced in the next couple of weeks.

Though the shuttle will move along the street, using cutting-edge, multi-sensor technology, there will always be a human “ambassador” on board during the test period, Beutler said.

Lincoln is seeking to become one of the first cities to offer an on-demand autonomous shuttle service as a part of its public transportation system.

Lincoln residents would be able to summon the electric-powered shuttle with smartphones, and the van would transport them to destinations along routes in the downtown area, Beutler explained.

This shuttle system could begin as early as 2019 in a summer pilot program if Lincoln is one of five cities selected by Bloomberg Philanthropies.

Lincoln is able to test the shuttle because of a $100,000 grant from the Bloomberg group, which named Lincoln one of 35 Champion Cities.

Five of those cities will receive additional grants, either $1 million or $5 million, to implement the shuttle idea in their communities.

"Professors and students may seek out the University of Nebraska and its Innovation Campus because of the research. Business could be created as new research develops new ideas for consumer products and services.

"Entrepreneurs may seek to locate in a city that offers a hub of transportation innovation," he said.

Instead of pushing paper, the city is going to push the limits, said Miki Esposito, director of the Public Works and Utilities Department.

"Here we are ... all together ... standing in the middle of America ... shaping history in transportation technology," said Esposito, who pointed to two staff members — David Young and Lonnie Burklund — as instrumental in pushing for Lincoln to become involved in the project.

"This shuttle represents a disruptive technological advancement that will significantly alter the way we move people and goods across the globe forever," she said.

"We are so fortunate and grateful to work in an environment where we can stick our necks out, take chances in the fearless pursuit of a new idea that has never been tested before," she said.

In Lincoln, partners in the city project include HDR, a Nebraska-based engineering and consulting firm; along with Allo, Nelnet, Nebraska Innovation Campus, the Downtown Lincoln Association and The Mill, Beutler said.

The city's old police station, 233 S. 10th St., is being retired from local government service, and it's getting pretty lonely inside the squa…

Lincoln's driverless shuttle project gets grant, has shot at bigger one

If things go Lincoln's way, residents and visitors to the city could be moving around downtown as passengers in driverless shuttles next year.

Bicyclists may soon need to move over for a different vehicle roaming the streets of Lincoln.

Mayor Chris Beutler spoke during a news conference in June at Nebraska Innovation Studio announcing the arrival of a driverless shuttle.

The automated electric Navya (NAHV-yah) shuttle has arrived in Lincoln and was the star of the show at a news conference Wednesday at Nebraska Innovation Studio.

The automated, electric Navya shuttle arrived in Lincoln on Tuesday and was the star of the show at a news conference Wednesday morning at Nebraska Innovation Studio. The city will test the driverless shuttle at Innovation Campus, with the goal of having a shuttle system downtown.