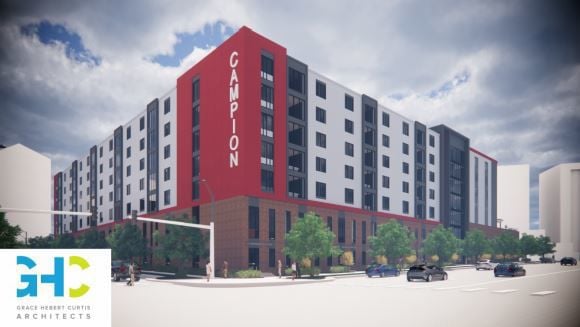 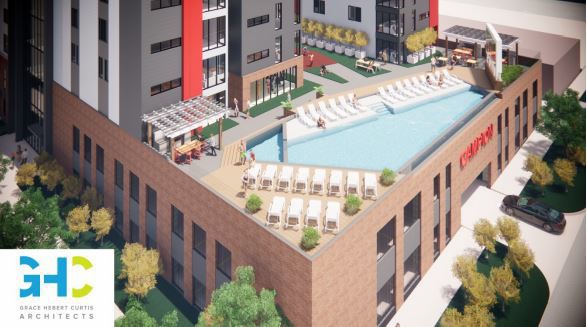 A  Louisiana-based team of developers  wants to build a seven-story building with 120 four-bedroom apartments and 14 town homes along with 259 parking spaces on the block bounded by Ninth, 10th, L and M streets.

The City Council voted 6-0 Monday night in favor of a seven-story student housing complex that will take up most of the block bounded by Ninth, 10th, L and M streets.

The $43 million project also would include an internal parking structure on the first two floors with 259 spaces.

The council's vote designates that the project is in conformance with the city's Comprehensive Plan for land use, which means it can qualify for tax-increment funding, allowing property taxes created from increased valuations to pay for portions of a project that would have a public benefit.

The amount of TIF for the project has been estimated at about $5.5 million.

That exact amount and how it will be used will be spelled out in a redevelopment agreement with the city. David Levy, an attorney representing Campion, told the council he expects that to come before the body late next month.

Still to be worked out before the project can go forward is the proposed elimination of an  alleyway going through the block.

Campion needs to have the alley vacated to accommodate its plans, but Speedway Properties, which owns the one property on the block that's not part of the project, says that will severely limit its ability to have trucks access a loading door on the north side of its building.

Campion has proposed giving Speedway an easement that would allow trucks to use its parking area to maneuver into and out of the door if necessary. City officials have signed off on that proposal, but Speedway called it inadequate, and the sides are continuing to negotiate.

Ann Post, an attorney representing Speedway, said the two sides continue to negotiate and she's "optimistic" an agreement can be worked out before the proposal comes before the council again.

Assuming a redevelopment agreement can be approved next month, construction on the project would begin in the spring and the complex would open sometime in 2022.

In other business Monday, the council approved a redevelopment agreement for a six-story, 153-room hotel and three-story, 80,000-square-foot office building at Nebraska Innovation Campus.

As part of the vote, the council also authorized the use of $5.6 million in tax-increment financing for the hotel, which is projected to open in the summer of 2021. Plans for the office building are still in the early phases.

The Lincoln-Lancaster County Planning Commission on Wednesday gave the green light to a large proposed development in north Lincoln.

Oriental Market in north Lincoln to expand, double in size

A north Lincoln business plans to expand and double in size.

The University Nebraska-Lincoln is hosting a series of events to bring awareness to indigenous women who are missing or have been murdered.

Plans call for a $15 million-$20 million redevelopment project that will turn the northern part of the building into a hotel.

A  Louisiana-based team of developers  wants to build a seven-story building with 120 four-bedroom apartments and 14 town homes along with 259 parking spaces on the block bounded by Ninth, 10th, L and M streets.