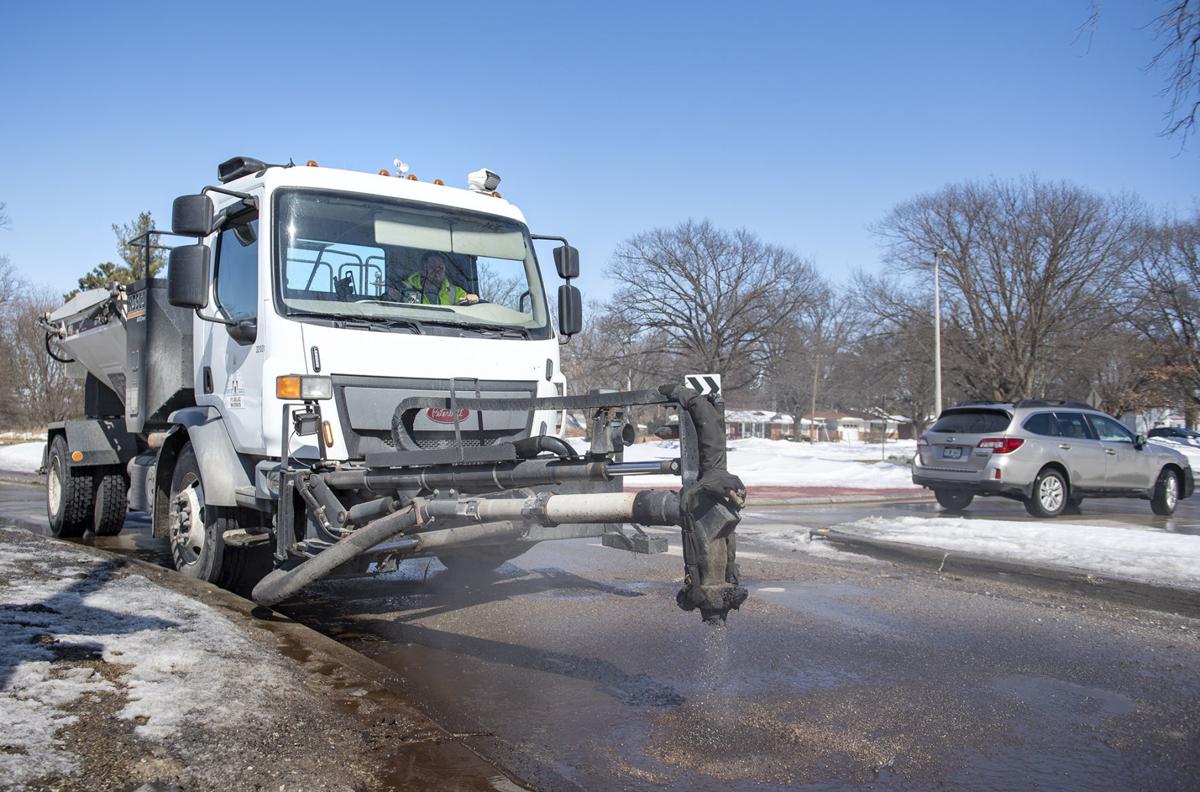 Equipment operator Ray Schmid fills potholes in March using a spray injection, which allows one operator to complete repairs from inside a truck. 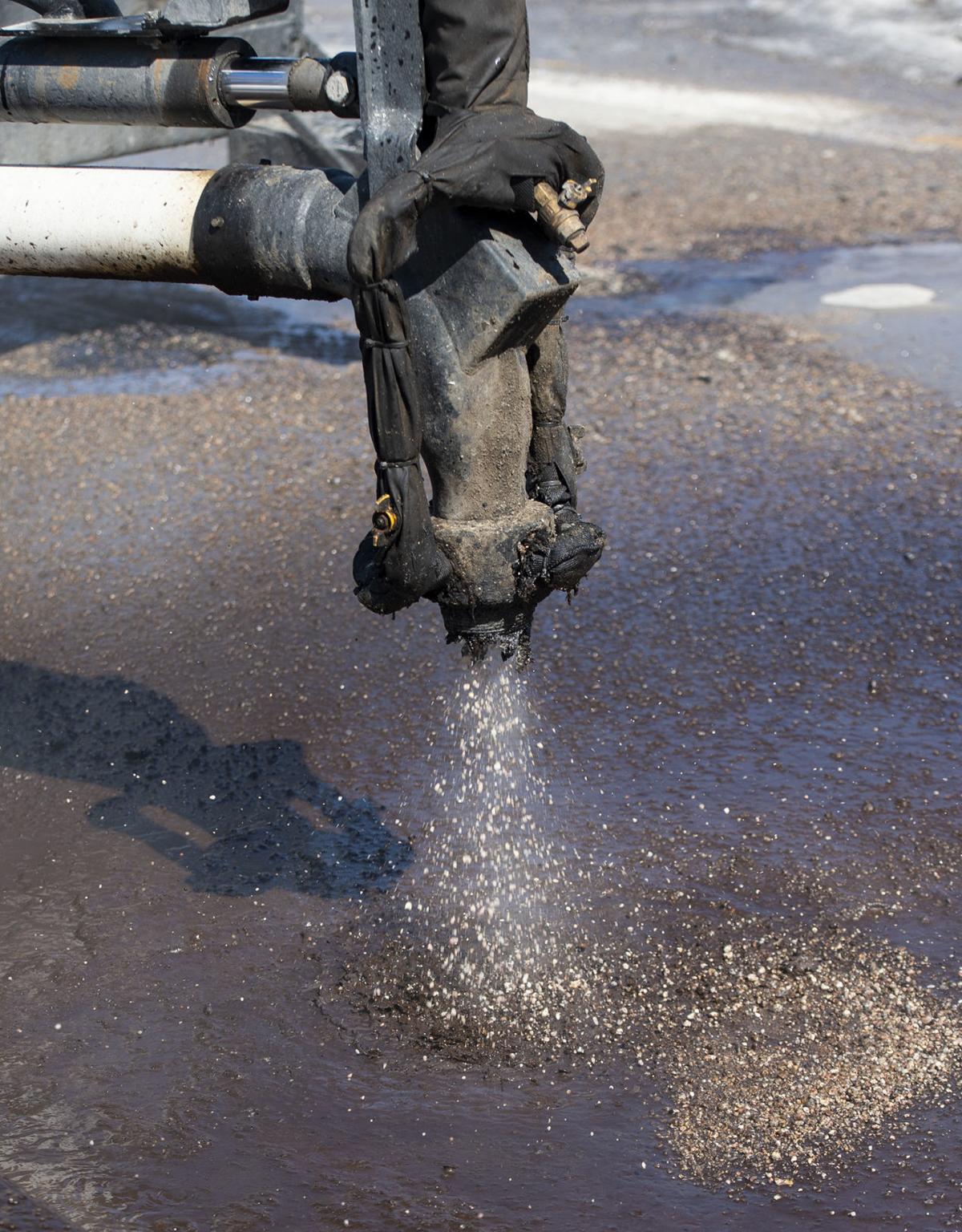 A Rosco Leeboy spray patcher works Monday on Sheridan Boulevard and 33rd Street to temporarily patch potholes. The patches are temporary because the moisture on the roadway will continue to freeze and thaw. More permanent solutions have to wait for warmer, drier weather. 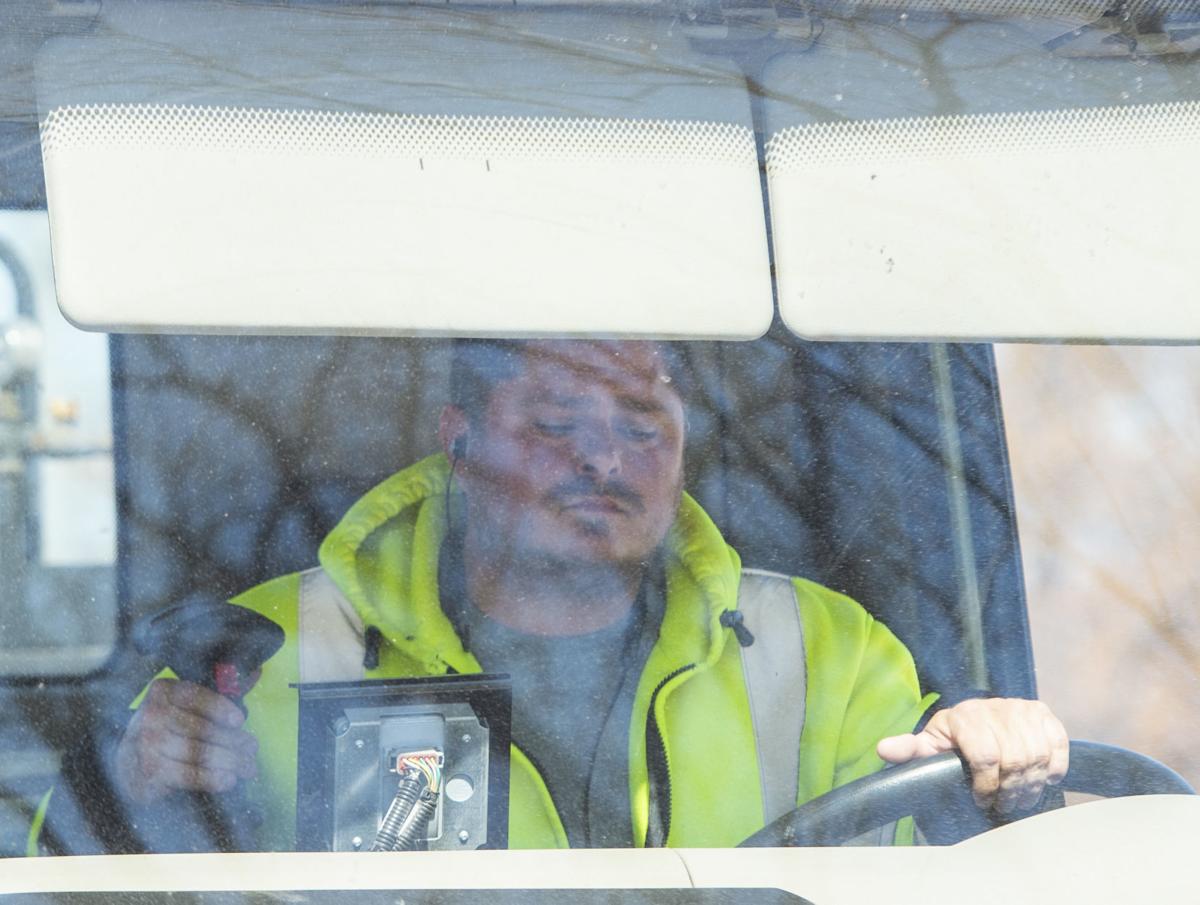 Equipment operator Ray Schmid looks down at the road as he fixes potholes with a Rosco Leeboy spray patcher Monday at Sheridan Boulevard and 33rd Street.

Eighteen crews, and about 60 city employees, were out in force Monday filling potholes on city streets in an effort to repair as many as possible quickly, Lincoln Mayor Chris Beutler said at an afternoon news conference.

Beutler signed an executive order declaring an emergency so the city could use mandatory overtime on the pothole repair surge.

The city planned to put as many resources as possible into pothole repair before rain arrived either Tuesday or Wednesday.

The weather-related problems are not unique to Lincoln.

Omaha had to close portions of 144th Street, a main arterial in the Millard area, because of pothole damage.

And the Lancaster County engineer is battling very muddy, almost impassable, gravel roads throughout the rural area and getting ready for possible flooding later in the week.

As the snow melts on county roads, they have become extremely muddy and Lancaster County officials have asked heavy trucks to stay off them if at all possible because of the muddy conditions.

“They’re terrible,” County Engineer Pam Dingman said about the gravel roads. “Slow down, stay as close to the middle of the road as possible and use care when passing.

“It rained for a month before the ground froze and then it snowed 55 inches on top of that. I’m just not winning,” she said Monday afternoon.

Monday, the county asked drivers to avoid Southwest 42nd Street from West Olive Creek Road to West Princeton Road and from West Panama Road to West Stagecoach Road because of the road conditions.

In addition to adding gravel to roads, the engineering staff spent Monday getting ready for potential flooding later this week if the area gets the 2½ to 3 inches of rain predicted.

They’ve loaded 100 barricades on flatbeds in case they need to close roads covered by water. They've been making "water over the road" signs. And they've borrowed a city sandbag machine and been getting sandbags ready, Dingman said.

They’ve also come up with a game plan to activate office staff for field work, to inspect bridges or close roads, if that becomes necessary, she said.

The county has received more than 200 calls from motorists about county road conditions in recent days, according to Ann Ames, deputy chief administrative officer.

She asks that people call the county's engineering office to report road conditions or stuck vehicles, not 911, unless there is a real emergency

Meanwhile in Lincoln, the city will repair as many potholes as possible over the next two days for safety reasons and because potholes are costly and sometimes dangerous to drivers, Beutler said.

The same people who have been removing snow are also the primary staff for potholes. But the city is using employees from other divisions on the pothole repair surge, Beutler said.

This winter's weather — rain, snow and ice and freezing and thawing — is the perfect recipe for potholes, said Miki Esposito, director of the Lincoln Transportation and Utilities Department.

The city has no budget specifically for potholes, but pays for the work from its large operations and maintenance budget. Esposito said she believes that budget can absorb a serious pothole season.

The number of potholes is dependent on the condition of streets and the type of winter weather. Over the past four years, the city has filled from 31,291 potholes in 2017 to 61,906 potholes in 2015.

Potholes and other non-emergency street problems in Lincoln can be reported in three ways:

* Report online at lincoln.ne.gov (keyword: pothole). An UPLNK report will be created that automatically generates work orders for crews that include the repair locations.

* Citizens can also download the free UPLNK app for their mobile phone at lincoln.ne.gov or in iOS or Android stores.

Like the weather, city expects pothole season to be extreme

Winter snow and spring potholes are overlapping this year as Lincoln finishes one of the coldest and wettest winters on record.

The snowplow that apparently sideswiped more than a dozen mailboxes while cleaning up after a storm three weeks ago had a wing blade with issues.

Jake Larsen likes his clean and furnished fifth-floor apartment with its hardwood floors and private bedrooms.

NORTH PLATTE — The National Weather Service is posting blizzard warnings for the Nebraska Panhandle and other parts of western Nebraska.

A confluence of factors has led the National Weather Service to warn of the possibility of "major to potentially historic" river flooding this week.

Clean gutters, free downspouts: How to keep the coming water away

You should check your basement when you’re done reading this.

I-80 west of Ogallala to close in advance of blizzard; Ricketts declares emergency

The Nebraska Department of Transportation announced it will close westbound Interstate 80 at Ogallala Wednesday in advance of a predicted blizzard.

Leirion Gaylor Baird is the leading mayoral candidate on the campaign donation front, but all mainstream candidates have topped the $100,000 mark.

The map of road closures in Lancaster County filled with colors Wednesday.

Flash flood emergency up for Platte after ice jam breaks; 1 missing in Norfolk

City Council candidate Reshell Ray has been removed from the upcoming primary ballot because she failed to file required paperwork.

It’s been a bad year for potholes.

Equipment operator Ray Schmid fills potholes in March using a spray injection, which allows one operator to complete repairs from inside a truck.

A Rosco Leeboy spray patcher works Monday on Sheridan Boulevard and 33rd Street to temporarily patch potholes. The patches are temporary because the moisture on the roadway will continue to freeze and thaw. More permanent solutions have to wait for warmer, drier weather.

Equipment operator Ray Schmid looks down at the road as he fixes potholes with a Rosco Leeboy spray patcher Monday at Sheridan Boulevard and 33rd Street.