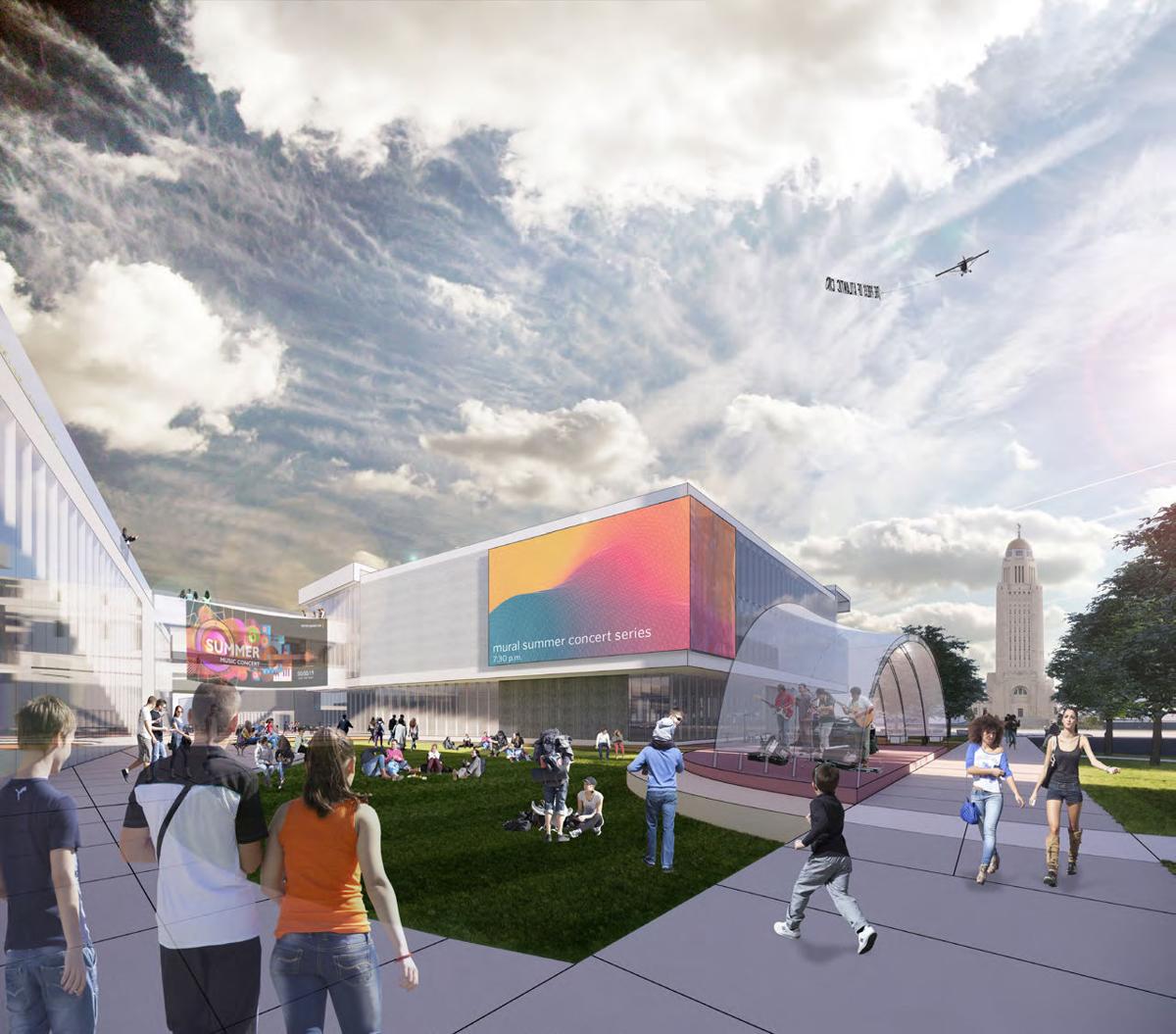 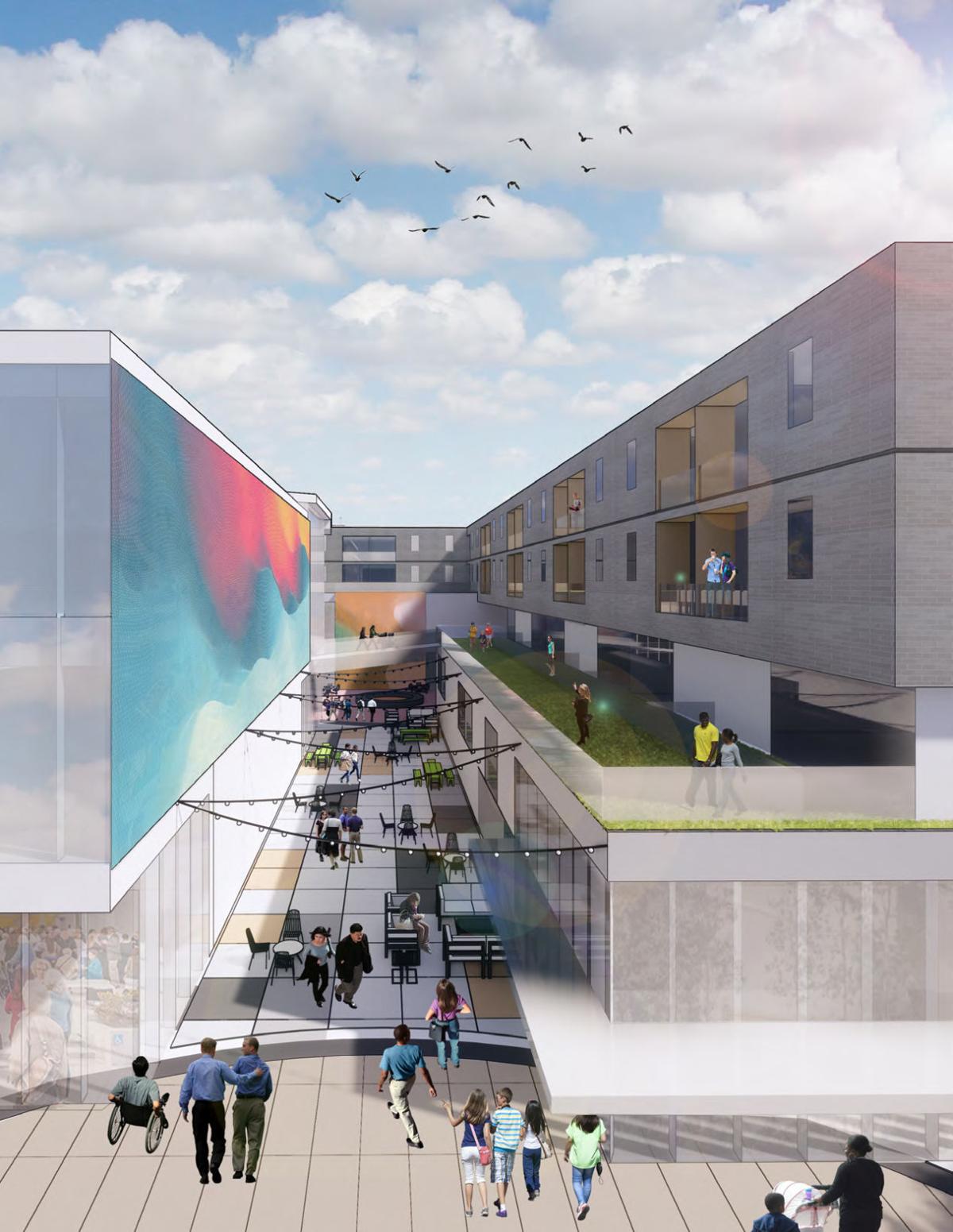 Lincoln has put a call out for an architect to bring to life the vision of a central library on the Pershing Center block that voters could potentially consider approving next year.

The selected architecture firm will design, price out and provide information for Lincoln residents on the proposal ahead of a possible 2022 bond vote that would decide the fate of the long-envisioned project, according to a request for proposals.

Since the opening of Pinnacle Bank Arena led to Pershing Center's closure in 2014, library supporters and some city leaders have seen the site as a prospective home for a landmark library that replaces and expands the reach of Bennett Martin Library.

White Lotus envisions the library would occupy the southwest corner of the block bounded by M, N, Centennial Mall and 16th streets and combine affordable housing units, a wellness center, a child care center, retail and a community green space with public art.

"To be part of an overall project like this really makes a lot of sense," Lincoln City Libraries Director Pat Leach said last week.

General obligation bonds backed by property taxes require voter approval, and the current city budget's capital improvement program eyes as much as $53 million in bonding for the library project. The request for proposals estimates the cost in the $35 million to $40 million range.

Mayoral Chief of Staff Jennifer Brinkman, who helped build a coalition behind the Pinnacle Bank Arena project, said selecting an architectural firms marks a step to keep the city's involvement in the redevelopment on pace with the developer.

"We need to be able to understand what the potential costs of a library project will be," Brinkman said. "Ultimately, Lincoln voters will get to decide."

Previous proposals to redevelop the Pershing block were rejected because Beutler decided they required too much public money.

The Lincoln Independent Business Association five years ago raised concerns about the proposed price tag and property tax impacts of the central library project on the block, and LIBA had also opposed the library plan because it wanted the city to sell the Pershing block and return it to the tax rolls.

City Councilman Roy Christensen, who has been on the council since 2013, remains skeptical of voter appetite for any bond project because of its hit on the property tax rate.

"Property taxes are the No. 1 issue and have been for some time," Christensen said.

The next steps will play a key role in the Foundation for Lincoln City Libraries' quest to raise money for the project, Leach said.

Personal memories of Pershing Center activities through the decades

Previous estimates have anticipated private donations to the project at as much as $10 million.

A 2017 program vision for the project envisioned the new central library as a community gathering place, in addition to a traditional hub for books and other media.

The architect will deliver preliminary designs of a three-story, 90,000-square-foot library that also has underground parking, according to the bid documents.

The city expects to pick the architect by May.

Brinkman believes the redevelopment of the Pershing block comes at the right time, especially with low borrowing rates, she said.

Lincoln residents are ready for movement on that important city block, she said.

"I’ve always seen it as the bookend to the arena story," Brinkman said. "And I think people are ready to turn the page and see what happens next."

"This is a good thing that will allow the public to both learn about and speak about this issue," Councilman Roy Christensen said Monday.

A city official said that once the redevelopment agreement has been finalized and approved by the City Council, demolition of the Pershing Center building will go forward, possibly sometime later this year.

The City Council heard from proponents of a project to build apartments, green space and a new library on the block where Pershing Center sits in downtown Lincoln.

City Council approved measures clearing the way for redevelopment of the downtown block anchored by the Pershing Center to move forward, even if voters don't approve a bond issue for a new library.

The Foundation for Lincoln City Libraries is gauging support for a central library; the city paid more than $15,000 to clean up a homeless encampment; and plans to pave a section of South 98th Street take shape.