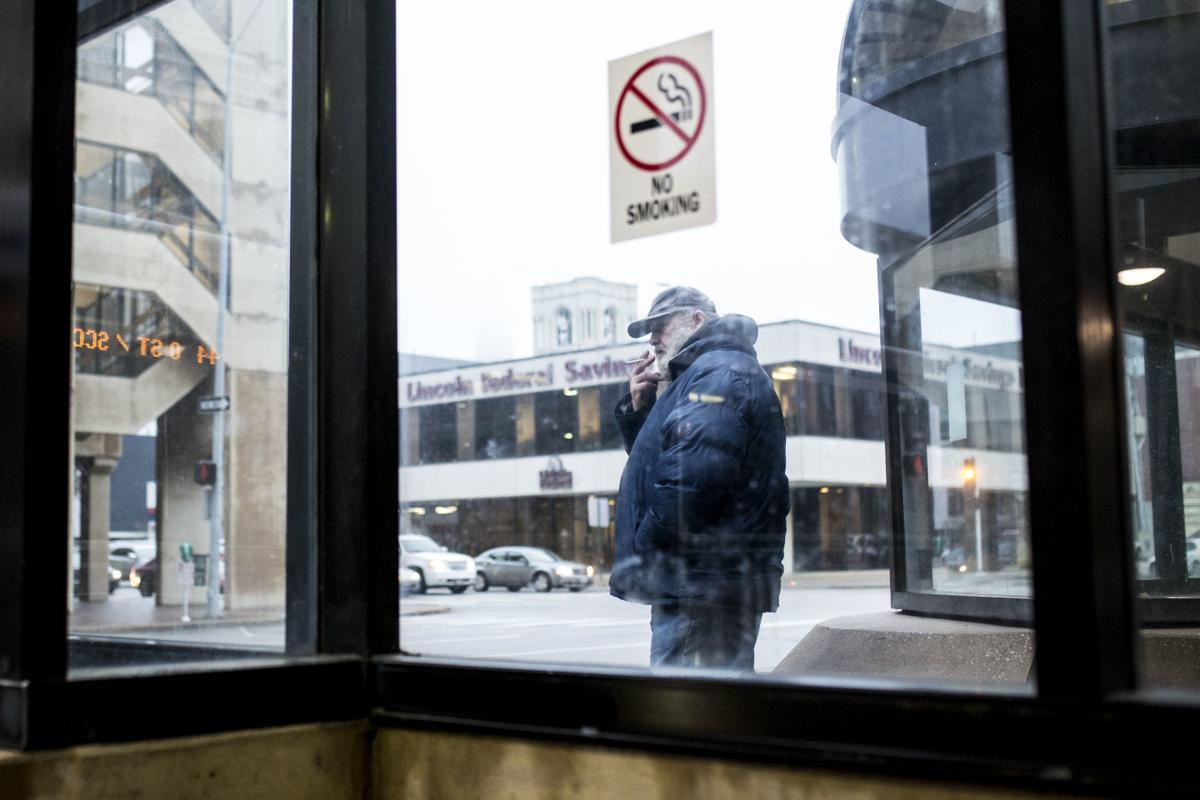 Donn Johnston waits for the bus outside the Gold's Building in December 2015. 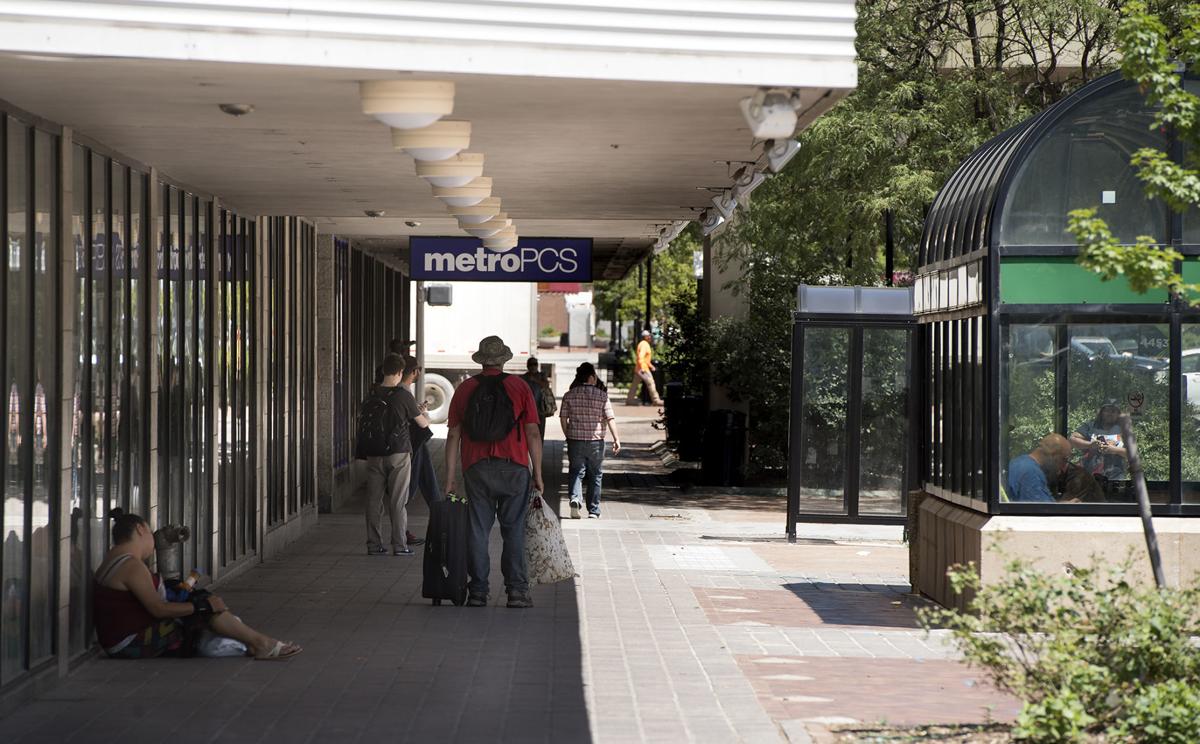 People wait for buses in the shade provided by the awning of the Gold's Building at the 11th and N streets bus stop in June.

How important would amenities such as retail shops, an indoor waiting area, covered boarding platforms, Wi-Fi, USB-charging stations and access to rental scooters or bikes be in a new, multi-modal StarTran transfer center?

That's one of the key questions a city survey asks to assess what amenities and design elements the city should incorporate in a replacement of the Gold's Building Transfer Center at 11th and N streets.

"The Gold’s location offers limited passenger amenities that help make waiting for the bus more comfortable, and the site limits future expansion of the transit system due to its size and configuration," the survey says.

The city is paying WSP USA $140,000 to study the feasibility of a multi-modal transit transfer center and produce a design concept.

More than 10,600 people daily ride the city's buses circulating 15 routes through the central point, according to StarTran.

Last week, WSP staff interviewed people waiting for buses outside Gold's, where the only available public bathrooms are across the street. The location also has problems with trash, loitering and smoking.

Mayoral Chief of Staff Jennifer Brinkman said the city sees the study as a key tool in securing federal funding to help build the center. City staff learned a previous, unsuccessful grant proposal lost out in part because Lincoln had not studied the transit center thoroughly enough, she said.

A transportation center previously proposed for the block bounded by Ninth and 10th streets, and M and N streets, would have featured heated and air-conditioned indoor waiting areas, StarTran administrative offices, bicycle storage and vendor space for a coffee shop or café.

The new survey doesn't ask people where they would want the center to be located, but it seeks to identify priorities in its design.

How important are safety, efficiency, comfort and other factors, the study asks.

Should it have space for economic development?

State officials studying a potential intercity bus service between Omaha and Lincoln are keeping an eye on the city's transit center plans.

So far, the preliminary intercity bus routes incorporate the Gold's Building Transfer Center as a starting and destination point for commuter lines running between the state's biggest cities.

WSP will make its recommendations to the city by May 2020.

Mayor Leirion Gaylor Baird's enhancement of a city policy outlawing discrimination against workers and job applicants strengthens workplace protection for transgender workers or workers who don't identify as a man or a woman.

Her directive aligns the city's employment policy with another large public employer in Lincoln — the University of Nebraska.

The LGBTQ advocacy group's ratings of cities in Nebraska and across the country gave Omaha the best score, with Lincoln second.

In announcing her action, Gaylor Baird challenged employers in Lincoln to follow the city's lead and enact similar policies.

Human Rights Campaign's index noted the city doesn't have an ordinance requiring city contractors to pledge not to discriminate against LGBTQ people.

"Yesterday's announcement is just one step in what we intend to be a series of actions to improve our community's commitment to equity, diversity and inclusion," Brinkman said.

The mayor headed to Washington on Tuesday, in part to have meetings with Nebraska's congressional delegation over the future of the city's water supply, Brinkman told the City Council on Monday.

The city has made repairs to its wellfields in Ashland damaged by historic flooding on the Platte River in March, and Brinkman said city staff feel Lincoln has a good handle on the FEMA funds to reimburse the city for its immediate, emergency repairs.

"We have identified a need to protect infrastructure from future flood events, so we are going to be seeking assistance through some hazard mitigation grant funding," Brinkman said.

The mayor will be also bringing up the city's search for an alternative water supply with Nebraska U.S. senators and congressmen.

"I will be the acting mayor (until) then," Council Chair Jane Raybould said.

$550,000 — The total tax-increment financing the Lincoln City Council approved Monday for a $2.2 million renovation on the Huber Building at Eighth and Q streets. The funds will largely help fund acquisition of the second floor to add six condominiums. As part of the renovation, a rooftop deck would be added, the building's historic signage preserved, windows replaced and the brick exterior repointed.

Natalia Wittstruck waits as long as an hour on weekdays at the intersection of 11th and N streets to transfer buses at the city's StarTran hub.

A $28 million, 153-unit apartment building at the corner of Cotner Boulevard and P Street received the green light from the Lincoln City Counc…

The city of Lincoln wants dockless, electric rental scooters to arrive no later than May 1 to launch its pilot program.

Fares have not been finalized, but project officials are estimating $6 for a one-way trip.

As Mayor Leirion Gaylor Baird and other city leaders took an initial ride on one of Lincoln's new electric buses last week, the bus turned west onto Salt Creek Roadway as an eastbound coal train barreled down the tracks.

Donn Johnston waits for the bus outside the Gold's Building in December 2015.

People wait for buses in the shade provided by the awning of the Gold's Building at the 11th and N streets bus stop in June.