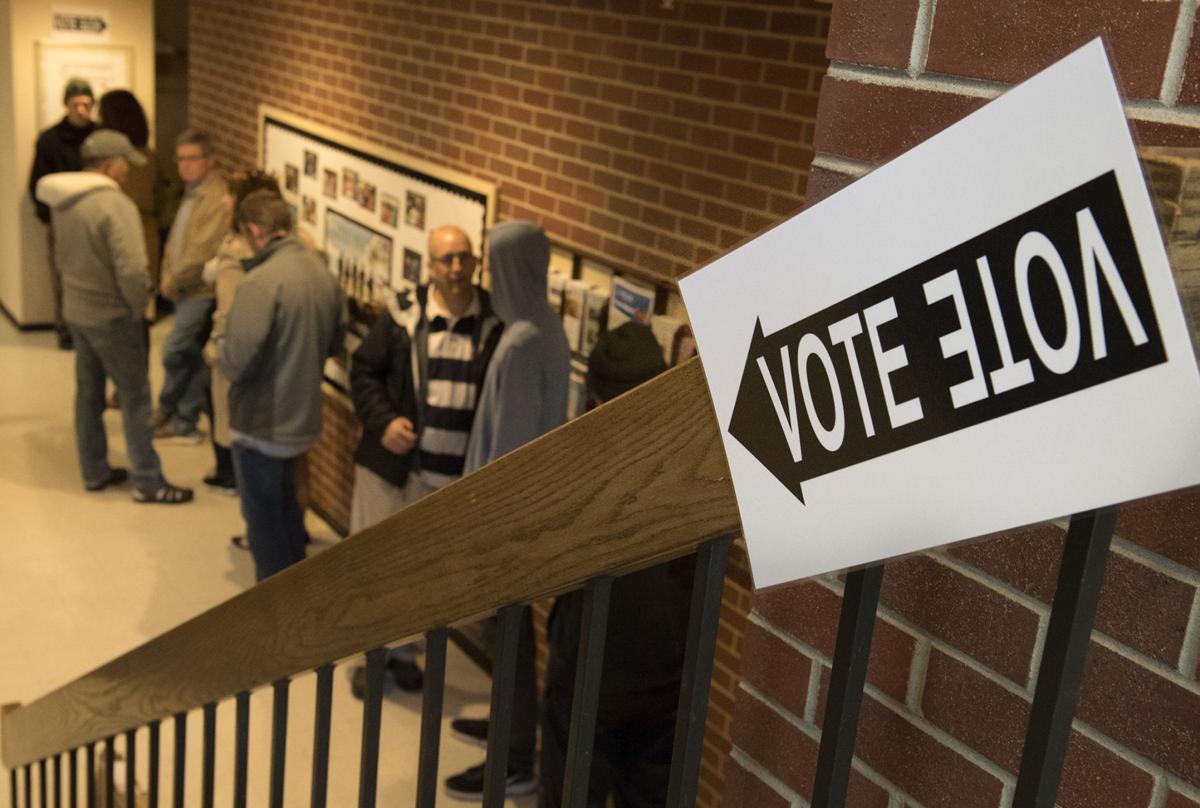 A line of voters awaits the opening of the polling place at Lincoln's Redeemer Lutheran Church in 2018. 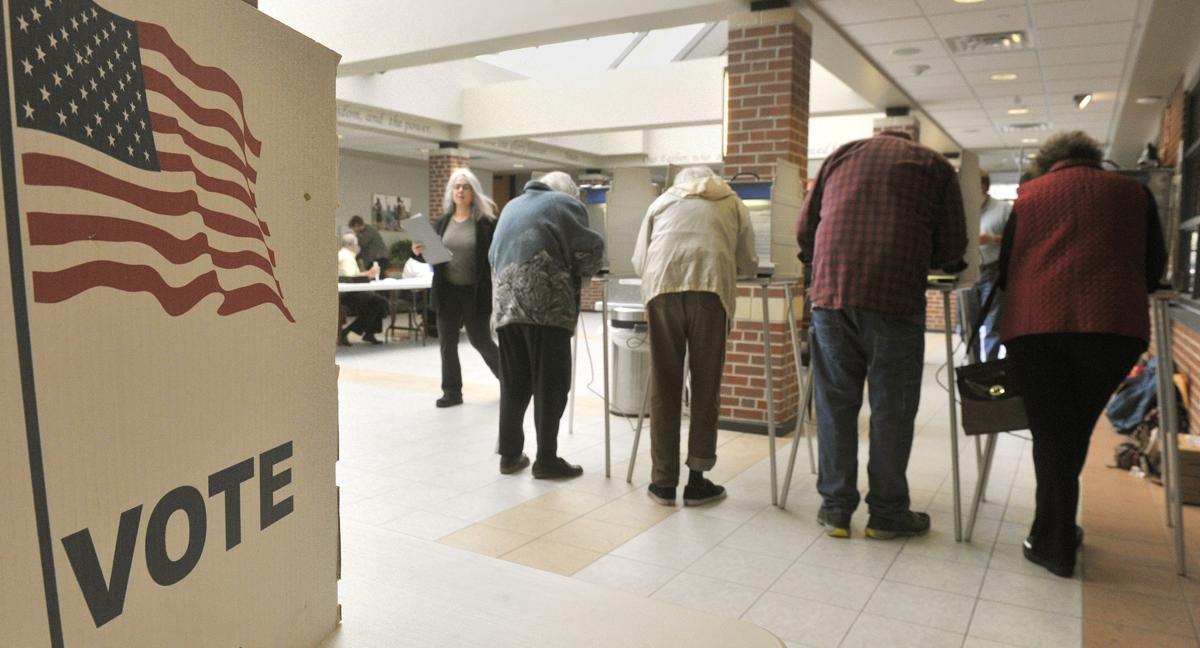 Rose Winter (left) carries her ballot to a booth as a steady flow of voters passed though the polling place at Eastridge Presbyterian Church on Tuesday morning.

During the May 12 state primary election, one or two typically busy precincts in Lincoln will have sensors that can detect the number of cellphones at a precinct, Election Commissioner Dave Shively said.

Developer Ken Carbullido of Election Tek LLC said the company seeks to reduce voting time to no more than 30 minutes.

His application would detect cellphones at a polling place and show how long someone had been there, but it won't know who is there, Carbullido told the Lancaster County Board earlier this month.

If delays are detected, election officials could see the problem in real time rather than relying on manual counting by a poll worker, he said.

The pilot would begin April 13 at the Lancaster County Election Commission Office, when early voting begins, and then two sites would be tested on primary election day, Shively said.

Lancaster County doesn't see some of the long waits typical in larger U.S. cities, but Shively said general election lines in a presidential year can still be busy.

He typically uses voting turnouts in previous elections to forecast staffing for polling precincts, he said.

City Hall: Lincoln police busted down wrong door; city to pay for it, but not 'second-guessing' officers

Future residents of a planned neighborhood southeast of 84th and Adams streets will have to take the long way around after plans to build a sidewalk got axed at Lincoln City Council on Monday.

City planners wanted the future cul-de-sac, called Regent Place, to link up to Windmill Drive via a walkway west of a nearby roundabout.

But some residents opposed the effort to increase walkability in the area, which is currently undeveloped land.

Britney Bandars said she and her husband bought their home in part because it was an end lot and that came with more privacy.

"We feel that having a sidewalk right up in our backyard will take away a lot of that," Bandars said during a City Council meeting March 2.

The Bandars and six other nearby homeowners opposed the planned sidewalk.

Tom Beckius, who represents the developer, said they weren't married to the sidewalk easement.

They only included it because a city subdivision ordinance requires it, Beckius told the council.

On Monday, Councilman James Michael Bowers, who represents the northeast quadrant of the city, successfully amended the development plan to remove the sidewalk easement.

When developers proposed this new subdivision, "the neighbors weren't pushing back on more units going into their neighborhood," Bowers said. "This is not an unrealistic thing to provide for them."

Lincoln mulls what to do as it approaches population milestone of 300,000

$421 — The estimated annual economic value to Lincoln of each of the 12,000 mature pin oak trees, according to the Community Forestry Advisory Board. The $3.6 million overall estimate includes property value, stormwater mitigation, energy use and pollution reduction. The advisory board hopes to raise awareness on the benefits of the city's tree canopy and need for tree pruning, planting and additional staffing in the city's forestry division.

16 — Tests pending at the Nebraska Public Health Laboratory in Omaha to screen for COVID-19, according to the Nebraska Department of Health and Human Services. Forty-seven tests so far have tested negative. One case has been confirmed, and two relatives of that patient are presumed positive for the novel coronavirus-related disease while testing continues.

$25,000 — The grant amount awarded by the Lancaster County Board to Lincoln Calling for its four-day, 90-band music festival to be held this fall.

5 to 7 p.m. Wednesday — When Nebraska Transportation Department officials will hold a public meeting to share plans for construction of the South Beltway. The meeting will be at the Sesostris Shrine Center, 1050 Saltillo Road, at the intersection of U.S. 77 and Saltillo Road. A public presentation starts at 5:30 p.m.

"As the queen of crisis …" — Lancaster County Engineer Pam Dingman referring to herself at a County Board meeting on coronavirus contingency planning.

City Hall: Occasional pop-up skateboard ramps in Lincoln but no showdown like Omaha had

City Hall: Rerouting for drivers near Lincoln South Beltway will begin in spring

Road crews will start rerouting traffic in some areas to ready for the three-year, $352 million construction of the South Beltway in May, an official said.

City Hall: Lancaster County looks to reduce the number of people going to the polls on Election Day

Only amid a pandemic does a measure designed to reduce in-person turnout for an election in America seem justified.

Repairs scheduled for 6-mile stretch of I-80

Pavement, guardrail and bridge work are scheduled to begin March 30 on a 6-mile stretch of Interstate 80 west of Lincoln.

Of the voters who cast a ballot at their polling site in the May 2018 primary, 56% have voted early for the 2020 primary, he said.

A line of voters awaits the opening of the polling place at Lincoln's Redeemer Lutheran Church in 2018.

Rose Winter (left) carries her ballot to a booth as a steady flow of voters passed though the polling place at Eastridge Presbyterian Church on Tuesday morning.