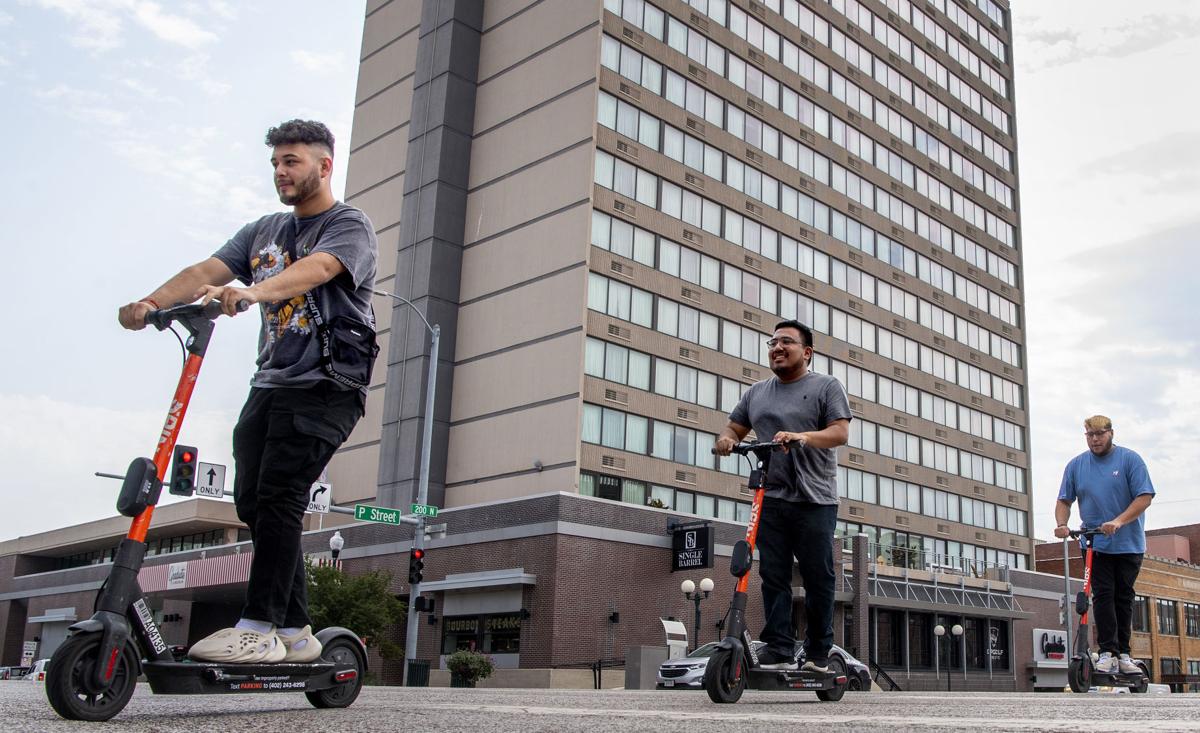 Riding on an electric scooter, Alberto Flores (left) leads his friends across the intersection of Ninth and P streets. 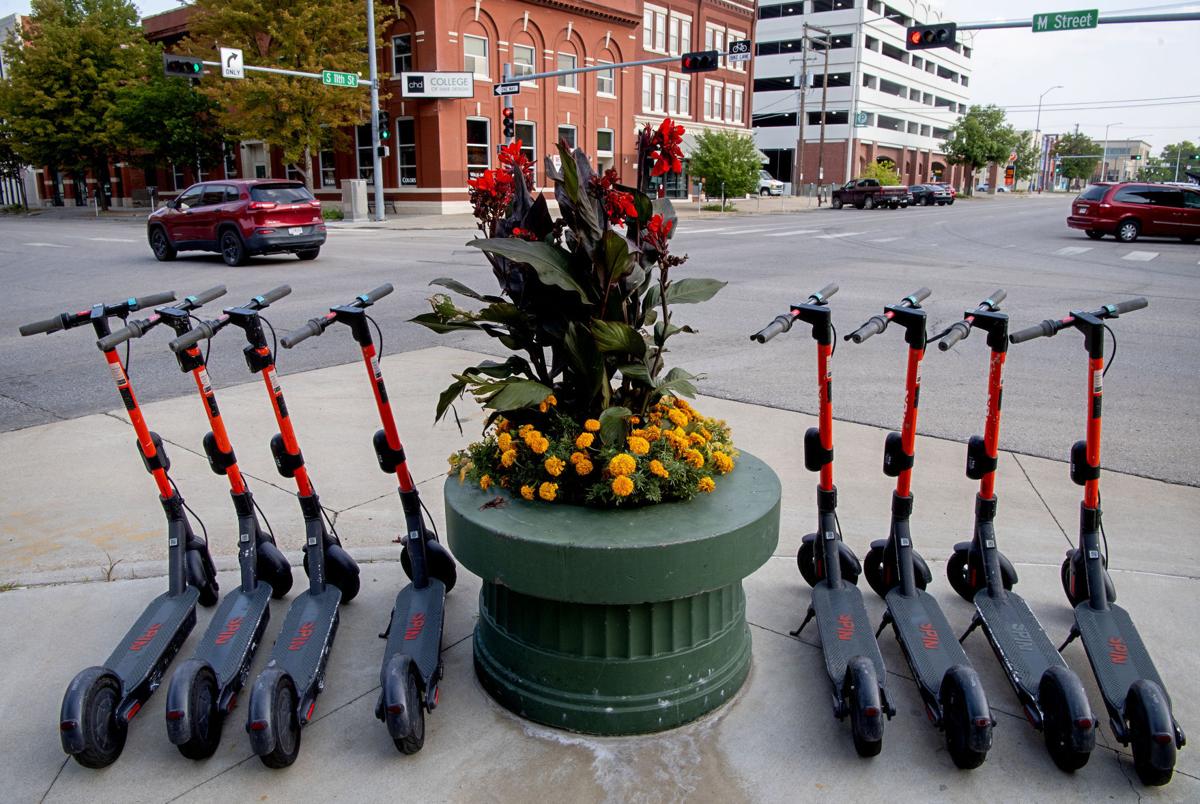 Spin scooters stand positioned ready for use at the intersection of 11th and M streets on Saturday.

Thanks to the pandemic, electric scooters will be around downtown Lincoln at least until the end of the year.

A one-year pilot program was set to end Aug. 31, but Lincoln Transportation and Utilities officials want to extend the program to better evaluate how much the e-scooters are used when the University of Nebraska-Lincoln is in session.

“We know 2020 was a unique year, so we didn't get a real good feel for the scooter program and what it would look like with UNL in session,” said LTU director Liz Elliott.

The program began Sept. 1, smack dab in the middle of the pandemic, when many university courses were still being taught remotely. This fall, students will be back on campus with — hopefully — a more normal school year (did you hear about that delta variant?).

The city is contracting with two e-scooter vendors for the program, which allows electric scooters on downtown streets — though not on sidewalks. The ordinance change to extend the length of the program would also prohibit scooters on sidewalks along Canopy Street and Pinnacle Arena Drive, two areas not part of the original ordinance.

The revised ordinance — which the City Council must approve — requires that LTU officials do a report assessing the impact of the scooters on transportation and safety within 30 days of the end of the program.

A report done six months in showed 9,758 people had rented scooters and made 33,167 trips, even when the program was paused during the winter months, from Dec. 11-March 1. Riders' average time on a scooter: 13 minutes and 15 seconds. Saturday is the most popular day for scooter riders and evenings the most popular time of day, the study found.

In the first six months, the city made $4,975 in revenue and vendors received seven compliance warnings. There were three scooter-related medical calls where a rider either fell or hit a pedestrian and police investigated one crash involving a vehicle.

The first six months, Elliott said, were a learning experience in terms of the challenges such as parking and educating riders that they can’t ride on sidewalks. But it wasn’t enough time to make an overall assessment of the success of the program.

“I think the numbers at the six-month mark were promising but I don’t think it was enough to give us an opinion one way or another,” she said.

The contractor of a housing development in northeast Lincoln agreed to pay a $60,000 fine as part of a settlement with the Environmental Protection Agency, which alleged the company didn’t take necessary precautions to keep pollutants and sediment from seeping into stormwater runoff.

The EPA filed a complaint against Starostka-Lewis, a Grand Island-based company developing Dominion at Stevens Creek on about 154 acres generally bordered by O, Vine, 104th and 112th streets.

Developers plan to build 433 homes and townhomes, though development will be phased in, beginning with 74 homes.

EPA representatives inspected the site in 2019 and alleged numerous violations of a Clean Water Act permit it issued to the company, including failing to follow practices that limit the release of construction pollutants into stormwater runoff that flows into a tributary to Stevens Creek and Waterford Lake.

The development has faced opposition from residents of a neighboring subdivision called Sky Ranch Acres, who came to the planning commission in 2017 to oppose plans to send traffic from the planned development through their neighborhood.

As a result of neighbors’ concerns, the developers changed plans to connect two streets in Sky Ranch Acres for construction traffic.

Some of those residents came back to the City Council in April to oppose a temporary change to that agreement. Because the city is building a roundabout at 104th and Holdrege streets, the city temporarily waived placement of the barricades into Sky Ranch Acres so emergency responders could more easily reach the area. That will end once the roundabout is complete.

In June, the City Council approved rules governing short-term rentals, including that owners be licensed annually and pay a $250 registration fee each year.

The city's Building and Safety Department extended the Aug. 1 licensing deadline because finalizing the contract with the vendor providing the online application system took longer than expected, said Director Chad Blahak. The department wanted to make sure the system was working smoothly so it will begin taking applications online Sept. 20.

In the end, the council scrapped a residency requirement, 600-foot spacing between rentals (it will review it after a year) and eliminated a 10% occupancy requirement for commercial high-rises.

Downtown bars will soon be able to have sidewalk cafes, as restaurants have been able to do for years, a change the Lincoln City Council unanimously approved Monday.

After the driver who nearly hit the pedestrian wasn't cited for a traffic violation, the pedestrian took to Reddit, a social news and discussion platform, where he filed his grievance in the court of public opinion.

One goal is to fill a longtime gap for young people whose mental health needs don’t rise to the level of emergency placement in Bryan Health's crisis center, but exceed the services available at emergency shelters, an official said.

Riding on an electric scooter, Alberto Flores (left) leads his friends across the intersection of Ninth and P streets.

Spin scooters stand positioned ready for use at the intersection of 11th and M streets on Saturday.